If there’s one thing that’s certain about my relationship with Japan, it’s this: you can’t keep me away for very long.

Thus begins the tale of my eighth journey to the Land Whence the Sun Rises, stretching from late June to mid-July 2015.

(By the way, I hope you’ll pardon the slightly refashioned rendering of the classic epithet for Japan – the common form has become so heavily overused that the mere thought of it is sufficient to send me retching. And believe me, you don’t want to see me retching.)

Having said that, at that time of this 2015 trip, Terminal 1 was just starting to come out of the construction tarps after a major renovation project. Whilst no amount of refurbishing – short of complete demolition and replacement – can possibly drag this ancient structure into the 21st century, I’ll admit that the sprucing up has yielded quite decent results. The terminal feels airier and more spacious, with the interior décor finally updated from Early ’80s to somewhere around Late ’90s. 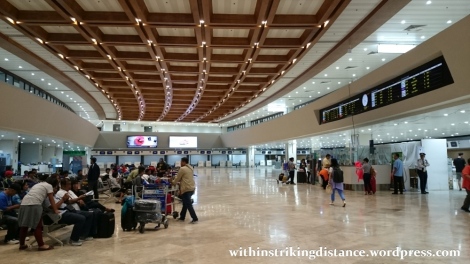 They still need to work on shortening those awful queues, though. Longer belt barriers (to force passengers into tighter snaking lines) and lots of self-check-in kiosks might help.

The improvements carried on beyond security and immigration, with new ceilings and carpeting installed. They’ve also put in additional structural braces to shore up the building in the event of an earthquake, though the placement and concealment (or complete lack thereof) of these elements might best be described as … awkward.

I can see about half a dozen injury-related lawsuits per quarter-second emanating from those things – but that’s not my problem. Let’s carry on, shall we?

Off with us to the MIASCOR Lounge: one of several semi-private places of refuge in Terminal 1 from the crowds, the inadequate seating, and the inflated airport food prices. I was travelling in cattle class on a budget airline for this trip, but complimentary lounge access happens to be one of my credit card’s useful perks.

Not the best of its kind, but quite decent overall, and after a recent refit the lounge certainly looked a darned sight better than when I was last there. The buffet – whilst fairly limited – probably trumps anything you’ll find outside, at least in terms of price (this being completely free).

Off to the boarding gates now. There was still a bit of scaffolding when I passed through, but most/all of it should be long gone by now.

And away we go. I didn’t gather enough pictures or details for a full flight report, so suffice it to say that I flew on an Airbus A320 with Jetstar from MNL to Kansai International Airport (IATA Code: KIX) near Ōsaka.

As we descended on our approach to KIX, there was a great view of nearby Kōbe Airport from my side of the plane.

Welcome back, Diego. It’s been far too long. (Yeah, I know, when I landed it’d only been three months since I was last on Japanese soil … but every time I arrive it feels as if I’d been away for ages.)

After arriving at KIX, I turned in my Japan Rail Pass exchange order for an actual, usable pass. (I purchased the exchange order back home of course, since you can’t buy one after arrival, although that might change in 2016.) A Green JR Pass, as usual: more expensive than the ordinary kind, but it gives me access to the comfortable Green (i.e., first class) Cars on JR trains so a worthwhile investment in my view. (I switched to Green after my second trip to Japan and haven’t looked back since.)

My trip was 15 days long, but the pass was valid for just 14, so I chose the next day as the stated activation date and paid separately for a one-way ticket to Kyōto. To save money, I availed of the ICOCA Haruka package which not only granted me a seat on the Haruka limited express service…

…but also included my choice of a limited-edition ICOCA card. Two special designs are available exclusively from the station at KIX: one featuring traditional Japanese art and the other (which I selected) … well, not quite so traditional. 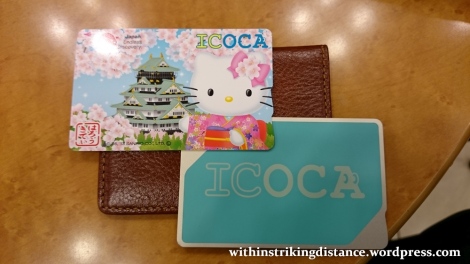 The other card in the picture (the boring looking one, obviously) is a regular ICOCA that I purchased years ago, and it’s seen plenty of service on various trips to Japan since. They’re valid for 10 years from last use so I really didn’t need to get a new one, but heck – I’m not one to pass up the chance to get a limited-edition Hello Kitty IC card.

Now then, it was early afternoon by this time and I was feeling quite hungry. Here comes the first bentō of this trip, which I enjoyed during the train journey.

Sit back and relax. It’s not a long ride, but there should be enough time to stretch out and recover from the flight.

Less than an hour and a half after leaving KIX, I saw a by-now familiar sign…

… and knew that I’d finally arrived at Kyōto’s soaring ultra-modern railway station. I’ve lost count of how many times I passed through its cavernous entrance hall over the years, but the sight never fails to amaze me.

A short ride on the city subway followed, and then I was at my accommodation for the night. This wasn’t my first time with the First Cabin chain of high-end capsule hotels so I knew what to expect: that is, a small plastic-walled box with just a thick curtain for privacy. 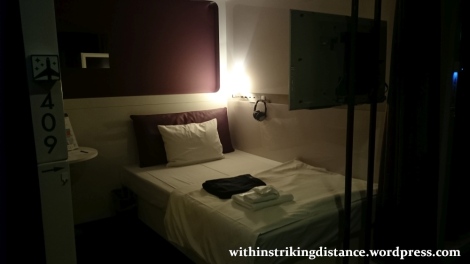 I didn’t mind the tiny room, but the shared bathing/toilet facilities left me feeling ill at ease (as sharing such facilities normally does) so I was thankful that this was just a one-night stay. Even my previous capsule encounters were very short-term events; I don’t think I can manage lingering in these places (even high-end ones like First Cabin) for up to a week or beyond.

All right, I knew where I was going to sleep … except it wasn’t bedtime yet. With a few hours of sunlight still remaining, I decided to head out and reunite with an old friend.

And by “friend”, I mean museum. The Kyōto International Manga Museum, to be precise. 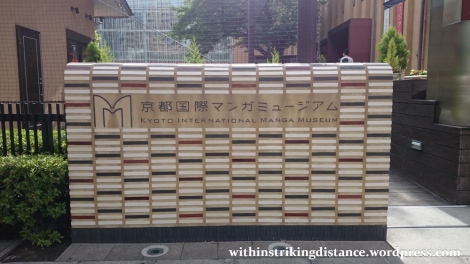 I think this post has gone on long enough, so I won’t say anything more about the museum here. To learn more, please read this detailed account (on my old blog) describing my first visit there. Just bear in mind that things have changed quite a bit since that time, not so much on the outside but more on the inside.

Afterwards, it was time for dinner. I wasn’t in the mood for a proper sit-down meal, so I raided a convenience store and returned to the hotel with the second bentō of this trip.

And so endeth Day 1. Pretty uneventful, but there will be more to tell when we start talking about Day 2…

…which will have its turn in the next post.