Every spring, the ruined enceintes of Fukuoka Castle take on a special blush of beauty, with the bare branches of its flowering cherry trees stirring magnificently into life.

Fresh from this morning’s temple walk in downtown Fukuoka, we’re soon back in Gion Station and off on the rails again, hurtling along the Kūkō Line a few stops west towards Akasaka Station.

From here, a short walk is all it takes to bring us to the north-eastern corner of Maizuru Park, the site of what was once Fukuoka Castle.

You might remember that we were here five days ago. At that time, the cherry trees planted along the castle’s moats and walls were still quite bare…

…but what a difference just five days can make. 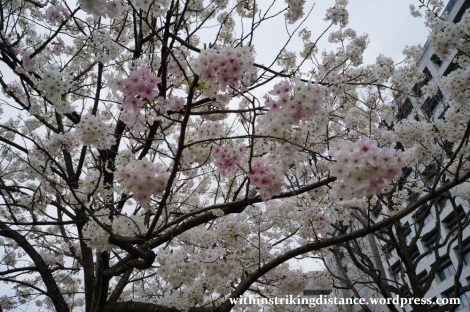 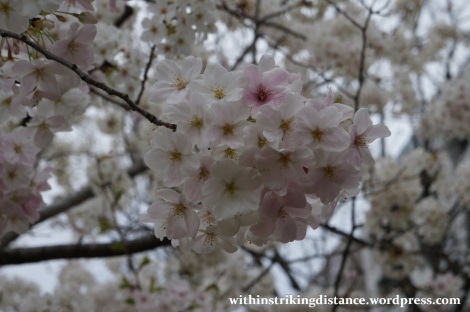 The arrival of this year’s (i.e., 2015, when this trip took place) sakura wave also heralds the start of the peak hanami season, with throngs of people pouring into the park to catch a fleeting glimpse of these delicate blooms at their finest. 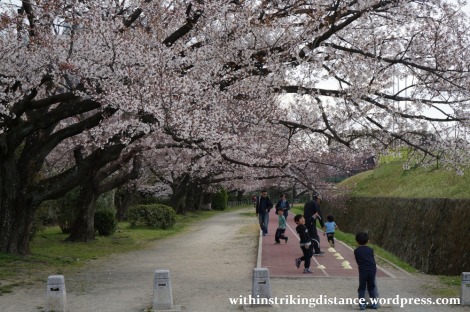 With the crowds come the food stalls, mostly still shuttered at this early time – but give it a few more hours and they’ll soon be dishing out meals for hordes of hungry picnickers.

Pink and white cherry blossoms may have been spreading out across the sky, but over the ground, something else was beginning to spread: that nearly ubiquitous symbol of hanami time…

I’ve seen these pop up in parks all over Japan every time spring rolls around, and no wonder: it’s an easy and reliable way to lay claim to a prime spot under a sakura tree of one’s choice. Some groups even reinforce their territorial ambitions by sending out one member of the party – the hapless young newbie on an office team, for example – to sit (and/or nap) on the chosen spot, with their lonely guard duty starting at the crack of dawn and lasting for hours until the rest of the gang turn up later in the day.

Right then, let’s carry on westwards across the vast park. Along the way, we’ll pause to admire the Najima Gate, one of the few centuries-old structures still standing on the castle grounds…

…although interestingly enough, it wasn’t even originally a part of Fukuoka Castle. Najima Gate was supposedly used as a side entrance at Najima Castle, an older fortress built north-east of here, and after that was abandoned in the early 1600s (with the centre of power newly transferred to Fukuoka Castle) the portal was taken apart and given to a loyal retainer for reuse at his own residence. How it eventually ended up in its current spot I’m not sure, though given that high-ranking samurai would have built their houses in or near their lord’s castle, I doubt that this ancient gate travelled very far from its former location.

Just a short distance past the gate, we come to a broad pathway leading past large stretches of open ground. Hanami party-goers aren’t usually allowed to do any barbecuing (no doubt for safety reasons), but here, a small section of the park has been set aside for some authorised grill-work.

Cherry blossoms and roasted meat – what a splendid combination. (^_^) 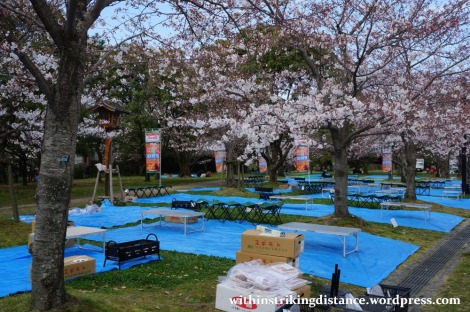 For those not inclined to do their own cooking, the usual long rows of festive food-stalls are also in place. (Barbecuing is great and all, but personally, I’d rather grab a few ready-made takeaway trays and happily laze about beneath the flowers without having to bother with lighting fires and basting and all that.)

Returning to the matter of blue tarps, one particular family (or group of workers, or club, or band of mates…) seems to have snagged an extra-prime spot under a particularly lovely tree.

For everyone else, there are other trees to park themselves under – as well as loads of open space to either nap upon or play around in. 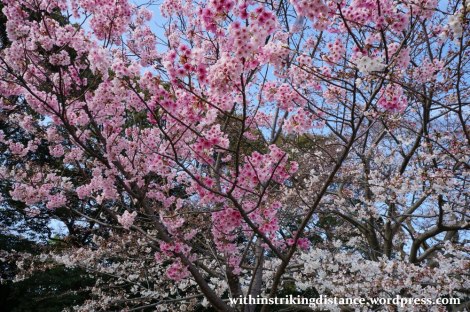 Near the western end of the path, a small area enlivened with colourful flower beds…

…welcomes us into the adjoining Ōhori Park, centred on a large pond (almost a small lake) that was once the vast western moat of Fukuoka Castle.

Like Maizuru Park, this is a place we’ve been to very recently, but the onset of full bloom in the neighbouring castle compound and the influx of happy blossom-hunting crowds have injected an extra spark of life into its broad pond-side walkways. 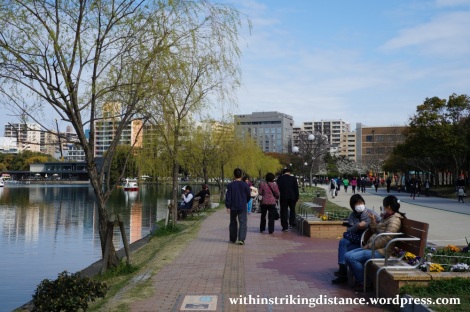 And if the crowds begin to get the better of you, I invite you to turn and gaze upon the enormous pond in the middle of the park. Take in the peaceful sight of its calm waters…

…before plunging once more into the thick of the festive hordes and partaking of the ebullient atmosphere in the shade of the sakura groves.

And with that, this series of posts documenting my spring 2015 trip to Japan comes to a celebratory end. Thank you so much for accompanying me on this journey, and please look forward to the next series, which will cover my (much longer) summer 2015 visit to the same country.

For the moment, cheerio.