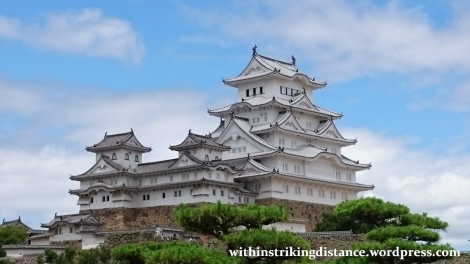 Diego’s castle obsession draws him back to an old favourite, fresh out of wraps after a half-decade-long restoration programme.

The 28th of June 2015 may have dawned dim and overcast over Japan’s former capital, but there’s nothing like one’s sweet and seemly Sunday obligation to dispel the clouds … from one’s soul at any rate, if not from the skies above. Off I went to Kyōto’s Kawaramachi Catholic Church, where I attended the 7:00 AM Japanese Mass (schedule here; note that an English Mass is offered at 12 noon on the 2nd and 4th Sundays of each month). 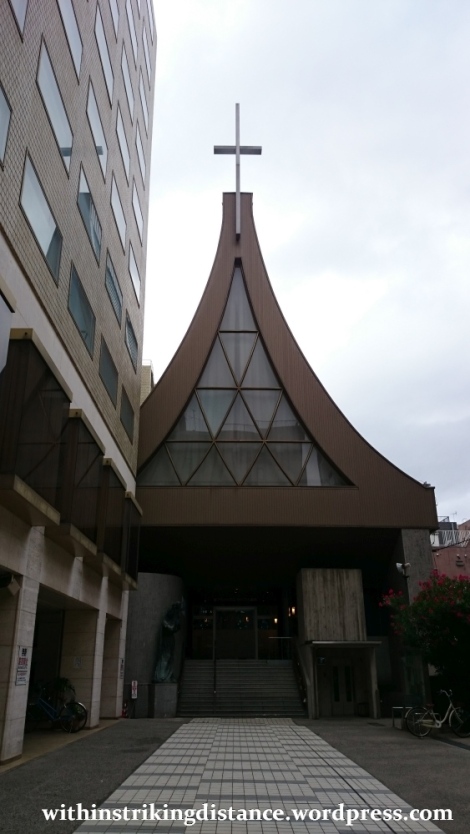 On my way back to the hotel for breakfast, I spied an interesting poster in one of the subway stations I passed through. 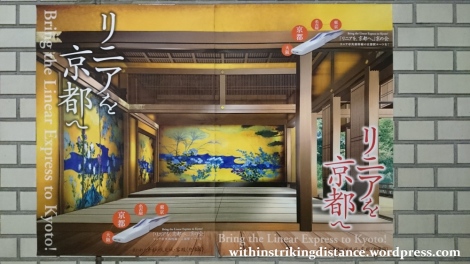 The poster was put up as part of a local campaign to include Kyōto as a stop on the future Chūō Shinkansen, a super-high-speed maglev line that’s expected to whisk passengers between Tōkyō and Ōsaka in just a little over an hour – that is, once it’s finished about 30 years from now. (The “Linear Express” in the poster refers to the blisteringly fast rolling stock that’s being developed for the service.) There’s been a fair bit of dispute over which cities and prefectures will get a station on the new railway, with local governments along the intended route vigorously campaigning for their own stops, though the plan as it currently stands isn’t likely to include Kyōto. Then again, with three decades to go and Japanese politics being what it is, I wouldn’t discount anything at this point.

In any event, that train was for the future … and I had an appointment with another train for the here and now. Next stop: Kyōto Station, where I was due to board the 9:49 Hikari 461 service bound for Okayama.

Today’s rolling stock was a 700 series shinkansen. Not the newest train on the line, and its age was also quite apparent inside with the tired-looking upholstery and scuff-marked panelling of its first-class Green Car, but it was more than adequate for the hour-long journey ahead.

I mentioned that the Hikari 461 was bound for Okayama, but I wasn’t going that far. At 10:50 am, I stepped off as the train made a brief stop in the city of Himeji.

Along the pleasant, mostly flat walk to my destination, I came across what appeared to be an ordinary pay phone booth – except this one was topped with a tile roof. A sneak preview, perhaps, of what I was about to see? 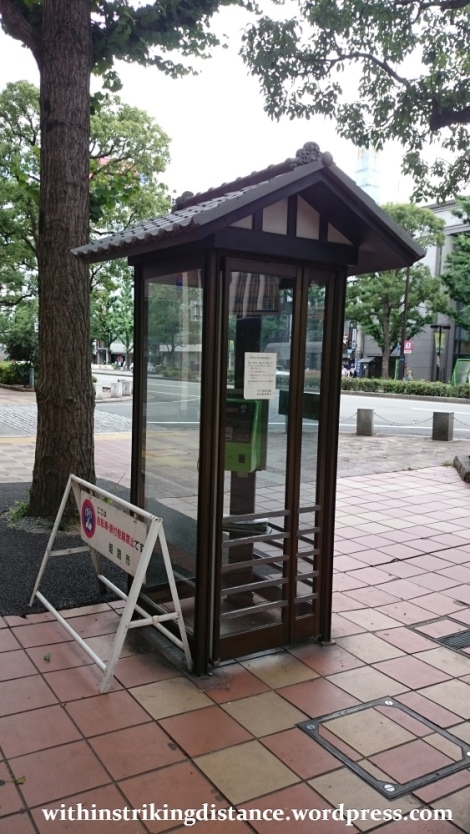 Hardly. I doubt anything can serve as a fitting preview to the soaring walls and sprawling grounds of Himeji Castle other than Himeji Castle itself. 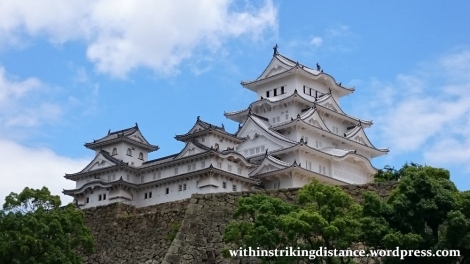 The visit of 28th June 2015 was actually my fourth to this incredibly photogenic 17th-century fortress. To briefly recount those experiences (with links to older blog posts that I wrote about each one):

This latest trip to Himeji was just a quick hi-and-hello, a bit like checking up on an old friend to see how he was doing after a major operation. I was, of course, eager to see the main tower again after its recent reopening, but I neither took as many pictures nor explored the grounds as thoroughly as I did before – and for this reason I won’t include a detailed commentary in this post. For more information on the castle and what you might expect to see (bearing in mind that some areas might still be undergoing restoration), I invite readers to check out the older blog posts linked above, most especially the one documenting my 2009 visit as it’s particularly in depth. (Note that the 2009 post is split up into multiple pages due to its length; kindly scroll far down to the page numbers just above the comments section there in order to move between parts.)

The main tower was reopened to visitors in late March of 2015, from which point tourists have been pouring in by the busload. Even when I was there, a few months after the resumption of access, the queue was still phenomenally long. 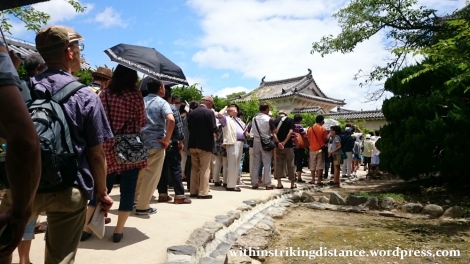 The results of the restoration effort were most apparent on the outside, with the castle’s formerly off-white walls now glowing pristine (almost blindingly so), but the austere interiors were pretty much as I remembered them. Whatever improvements had been introduced were likely of the hidden, structural sort, though no less appreciated for that. 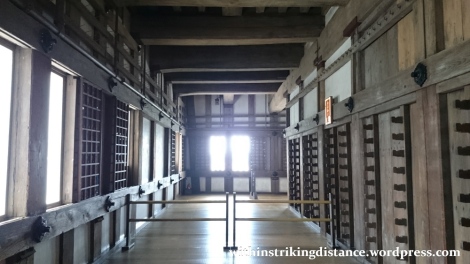 The top floor was cramped with visitors, which meant having to wait one’s turn at each window just for the chance to snap a good picture. I’d say it was worth every wait, with the lofty position opening one’s eyes up to splendid views of the surrounding city. 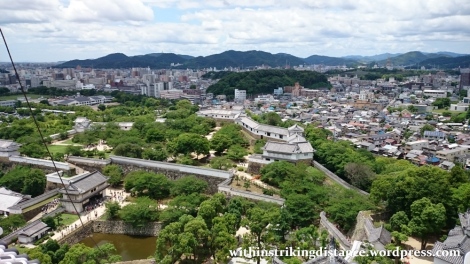 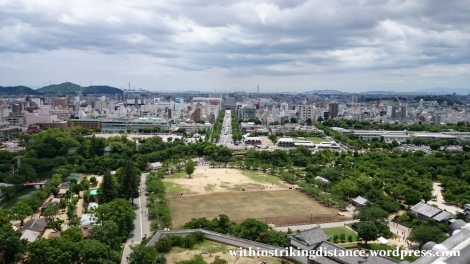 I then went on a relaxed stroll around the castle compound, freed (by the experience of my previous visits) from the compulsion to take photos of every stone or read every informative signboard. More often than not, wherever I found myself on the expansive grounds, I would find myself turning back to the massive, incredibly beautiful main tower, enjoying how it looked from different angles and elevations. 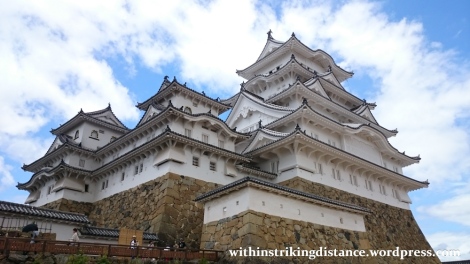 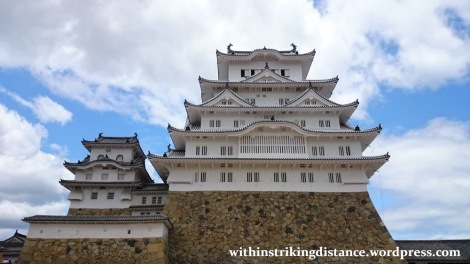 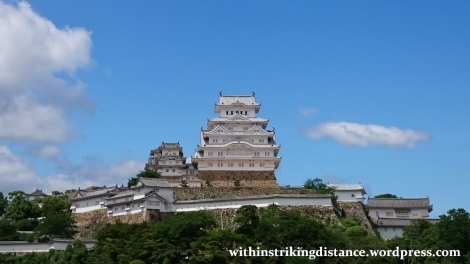 Mm, now that’s something I hadn’t experienced before – going on a boat cruise inside the castle moat. Something to try for next time, I suppose. 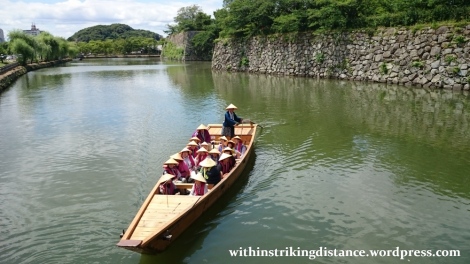 Back to Himeji Station now, where I boarded the Super Hakuto 8 limited express service for Kyōto. Watching the second half of my brief video below…

…you might observe the rather loud hum of the engines on this train, a HOT7000 series DMU. The fact that this rolling stock runs on diesel, rather than the electricity used for most JR trains, might have a lot to do with that.

Like the 700 series shinkansen I travelled on this morning, the HOT7000 was fairly old both inside and out. But with Kyōto less than 1.5 hours away on this slower service, there really wasn’t any need for state-of-the-art equipment. 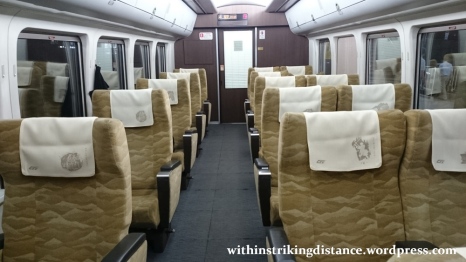 Time for a late lunch, purchased from the station and enjoyed on board the train. Can’t go wrong with beef. 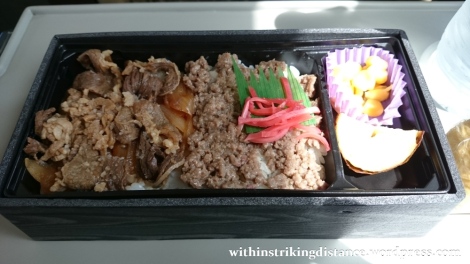 By the way, my point of arrival at Kyōto Station was Platform 0. Yes, they’ve got a Platform Zero. Here’s photographic evidence of the same. 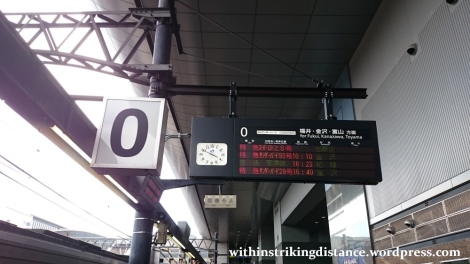 All that’s left to suss out now is whether there’s a hidden platform about three-quarters of the way between 9 and 10.

About an hour later, after collecting my luggage, I returned to the same platform… 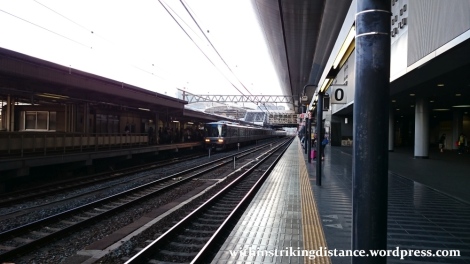 …where I soon boarded the Thunderbird 31 limited express service. The train goes as far as Kanazawa, and thence to Wakura-Onsen, but on this occasion I stayed on for just an hour and 20 minutes until the train reached Fukui.

Whilst on board the 683 series EMU, I unpacked the ekiben that was to be my dinner. The cover simply said からあげべんとう (karaage bentō, “deep-fried chicken bentō”)… 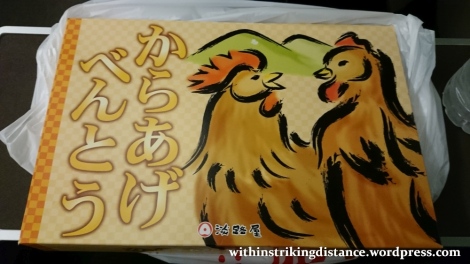 …but I was in Japan, and this was no mere fast-food takeaway box. 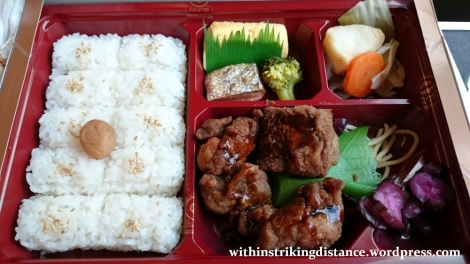 After arriving at Fukui Station, I was greeted by the rather incongruous sight of a dinosaur dressed in a white lab coat perched upon one of the platform benches. Note the, ahem, undoubtedly bespoke footwear. 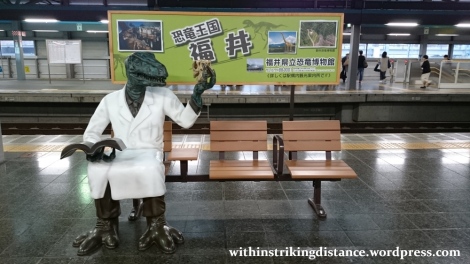 That statue wasn’t the end of it, either. There were loads of dinosaur-themed items both inside and outside the station… 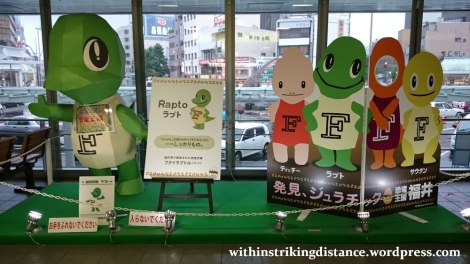 …the reason for which will be made clear in a future post.