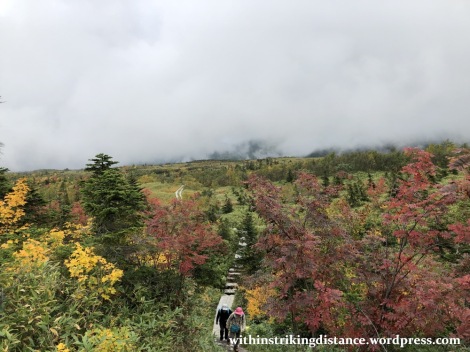 There are many places of interest along Japan’s Tateyama Kurobe Alpine Route (立山黒部アルペンルート), the scenic corridor through the Hida Mountains between Toyama and Nagano Prefectures. Amongst them is one of the country’s largest alpine wetlands: a place that sleeps under a thick blanket of snow for much of the year, but stirs gloriously to life during the summer and autumn.

Like many of this tectonically active country’s natural landmarks, Midagahara (弥陀ヶ原) was born out of an ancient volcanic eruption. The flat expanse upon which the marshland sits is a pyroclastic plateau, composed mainly of material ejected from the nearby Tateyama volcano.

Due to the altitude (1,930 metres) and its geographic location, Midagahara is buried under snow for a good chunk of the year. In the spring and autumn, the snow melts away to reveal an alpine marsh: one of sufficient ecological significance to be included on the Ramsar List. Autumn in particular lends this place a special beauty, due mainly to the splendid seasonal colours that spread across the landscape from the tail end of September and through much of October.

My original plan was to stop over at Midagahara during an end-to-end crossing of the Alpine Route on 1st October. Finding myself with spare sightseeing time on 29th September, I decided to tick the wetland off the list in advance and free up more time during the full journey. For information on how I reached Midagahara from the nearest major city (Toyama), have a look through my detailed transportation report.

…I took a few moments to complete two important tasks before hitting the nature trail.

First: making a seat reservation for the return bus. (More details about why that’s necessary in my related transportation report.)

Second: a last-minute toilet break. Due to its highly protected status, there are no lavatories on any of the boardwalk trails that loop around Midagahara.

The bus terminal is also stocked with maps and other resources that might come in handy for planning one’s way around the area. Of course, it’s not easy to get lost around here so long as one stays on the boardwalks. There are two main courses: a shorter loop (marked in blue below) that takes about 40-60 minutes to complete, and a longer route (in pink) that requires twice that amount of time.

Here’s another map, with a little more English than on the one we saw earlier. This particular version was mounted on a wooden block near the start of the walking trails.

Incidentally, due to time constraints and lack of confidence in my endurance, I settled on the short course. 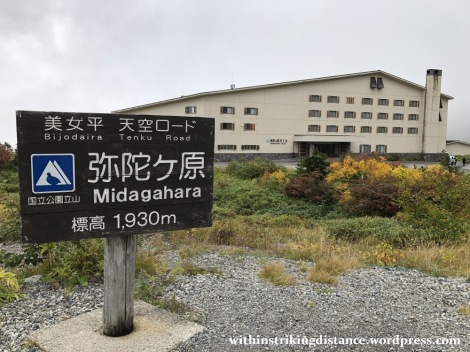 The building shown above is the Midagahara Hotel, one of a handful of accommodation options located along the Alpine Route. As I’ve written in my previous post, an overnight stay at one of these establishments is recommended if you’d like to do the full crossing at a more relaxed pace, with plenty of time for hikes and excursions. That said, where peak seasons such as autumn are concerned, one will likely find – as I did when planning my own holiday here – that rooms are in short supply or prohibitively expensive. 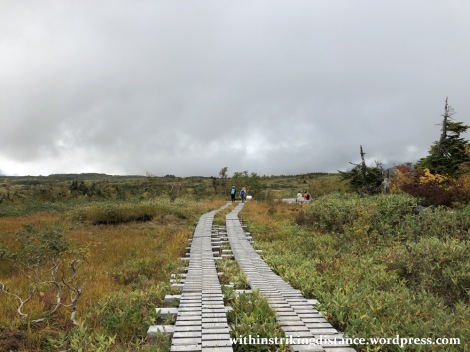 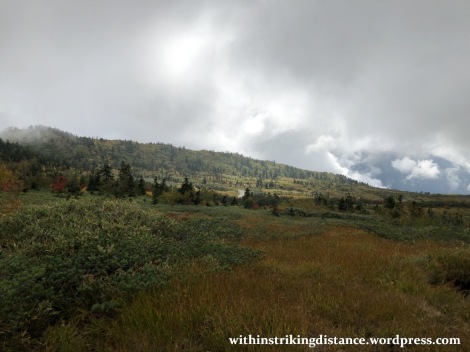 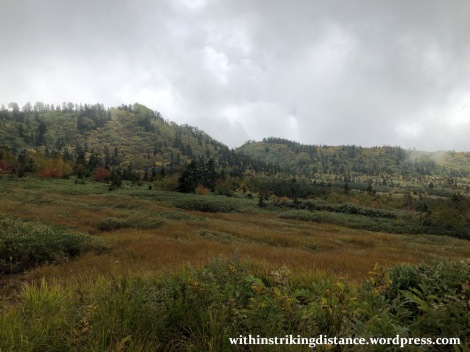 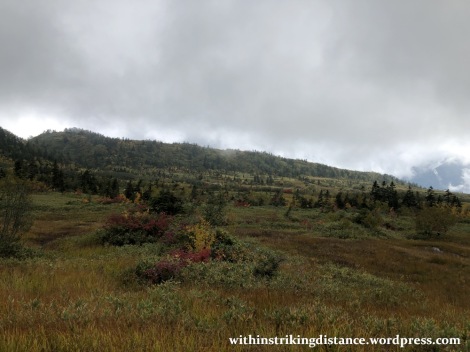 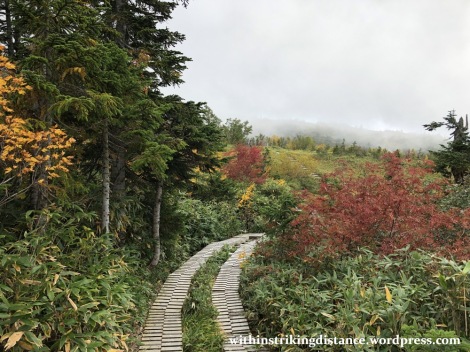 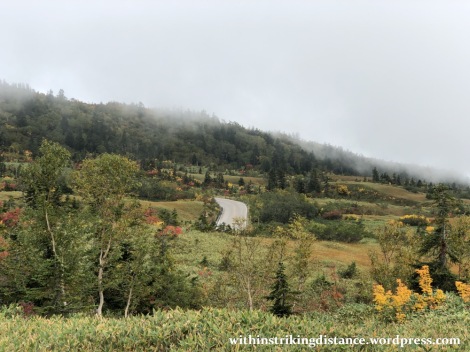 The views would have been much better during a clear day, with the surrounding mountains in plain sight – not obscured by rain clouds as was the case during my visit. That said, I found the walk very enjoyable indeed, with splashes of bright autumn hues spicing up the rolling green landscape.

Heavy though they were, the clouds overhead mostly withheld their threat of rain until after I’d reached the bus terminal. At that point, the taps were turned and Midagahara began to receive a rather heavy soaking. You can imagine how blessed I felt to have enjoyed the great outdoors before the deluge began!

Next came the long journey back to Toyama, as detailed in my transportation report.

And there we have it. I’d love to come back someday, hopefully in better weather and perhaps in an altogether different season (such as early spring before the snow melts).

A quick unboxing before bedtime: Toys Cabin’s 6-item 戦国の茶器 四 利休の章 set. This features miniature replicas of tea equipment either used by or made by Sen no Rikyū (1522-1591), one of the key figures in the development of the Japanese tea ceremony. My initial disappointment in the inconsistent scale - and the fact that some of these are too large for my intended use as nendoroid props - was quickly overcome by satisfaction over the incredible detail and quality of these pieces. Easily one of my favourite gachagacha capsule toy sets thus far. #miniatures #gachagacha #capsuletoy #ガチャガチャ #戦国の茶器 #千利休
Unpacking one of the newest additions to my Japanese miniatures collection: the 5-item 空港マスコット gacha set from J.Dream (with a nendoroid figure for scale). I’d love to unearth more airport-themed miniatures of a similar scale, in the hope of assembling and furnishing an air terminal diorama for my nendoroid photography. #ガチャガチャ #miniature #airport #空港
Finishing up my unboxing of Re-Ment’s ふるさと納税便 set. No. 5: Kaga vegetables from Ishikawa Prefecture. No. 6: Motsunabe ingredients from Fukuoka Prefecture. No. 7: Kuroge Wagyū and red wine from Hyōgo Prefecture. No. 8: Farm products from Chiba Prefecture. #rement #ふるさと納税便 #リーメント #リーメントぷちサンプル #リーメントふるさと納税便 #miniaturefood #miniature
Halfway through unboxing Re-Ment’s ふるさと納税便 set. (Going slow on this one to savour each moment, haha.) No. 1: Seafood from Hokkaidō Prefecture. No. 2: Fruits and juice from Yamagata Prefecture. No. 3: Dried fish from Shizuoka Prefecture. No. 4: Rice and eggs from Niigata Prefecture. More to follow after I’ve opened boxes 5 through 8. #rement #ふるさと納税便 #リーメント #リーメントぷちサンプル #リーメントふるさと納税便 #miniaturefood #miniature
Just a little something I’m trying out to help manage my, shall we say, delicate mental state. (As you can well imagine, the last year or so hasn’t exactly been kind to my mind.) The arc is somewhere in the middle of this as-yet-untitled manga series, so I’ve written it as if the reader already knows the characters and the setting. Can’t be bothered to explain further right now, haha, though I will add that Shima Rin and Hinata Shōyō are meant to be like their anime equivalents (whereas the two older chaps are original to my work and NOT meant to parody the characters they’re derived from). And yes, this is partly why I’ve been ordering all those Japanese miniatures. I can’t draw to save my life - so I’d have to take pictures instead. 😅 Final note: read it Japanese style, right to left (otherwise the dialogue won’t make much sense).
I’ve ordered and opened more Japanese miniatures since my last post (just too lazy to mention them), but I couldn’t resist the urge to write about this Re-ment Snoopy Coffee Roastery and Café set. I’ve spent a good part of the morning reading up on coffee thanks to the curiosity generated by this set, and I think I’ve a great idea for a writing project inspired by these pieces. #リーメント #リーメントスヌーピー #リーメントスヌーピーカフェ #rement #miniatures #peanuts #snoopy
One might characterise this as “overkill”, having nearly all elements of the Re-ment よきかな和の暮らし set laid out together like this. In future I intend to rotate pieces in and out, to match the mood and seasons (along with the other miniatures I’ve already acquired and have yet to acquire). That said, the eye-popping detail in these minute reproductions is really quite astounding. #リーメント#リーメントぷちサンプル #リーメントよきかな和の暮らし #rement #miniatures
The fun part was opening each box, not quite knowing what was inside. The not-so-fun part was assembly and sticker application (for some of the more complex elements). Made me wish I had a pair of craft tweezers and a good set of magnifying lenses. #リーメント #リーメントぷちサンプル #リーメントよきかな和の暮らし #rement #miniatures