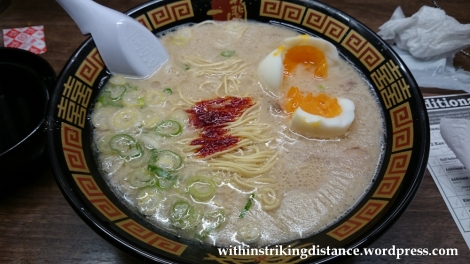 I enjoy trying new restaurants and tasting new dishes as much as the next unadventurous chap, but there are times when the tried-and-true exerts a pull that doesn’t simply pass unnoticed. In this case, it was my favourite ramen at my favourite ramen chain … though I can at least claim the excuse that this was a branch I hadn’t visited before.

Speciality? Tonkotsu ramen, also referred to as Hakata-style ramen (named after a district of Fukuoka where the dish is considered a local speciality).

Where? A few steps west of the Tazaemon-bashi bridge (太左衛門橋), on the northern bank of the Dōtonbori canal. The entrance directly faces the pedestrianised riverbank and isn’t visible from the motor road that runs north of the waterway. Tabelog‘s map marker is right on the money as far as the building’s concerned – just bear in mind that the restaurant itself is on the side facing the canal. Note that Ichiran is a chain and the shop we visited is one of many branches spread across Japan (there’s more than one in the Ōsaka area alone).

How much? 790 yen for a basic bowl of ramen. Various optional extras are available at an additional cost.

English menu? Yes. The vending machine where you choose your orders has English labels on the buttons, along with pictures of the items on offer. In addition, an English version of the sheet used to customise orders (more about that later) is available on request.

Links? The official English-language page is here. As always, Tabelog has a wealth of information on this establishment, though some knowledge of Japanese will come in handy when using that site.

Period/type of meal enjoyed on this visit? Late evening, dinner.

If you happen to be one of this blog’s microscopically small population of regular visitors, you’re probably aware that this isn’t my first brush with the Ichiran chain. Neither the most affordable, nor the very first, nor even the very best, Ichiran is nonetheless consistently good – and their unique dining arrangements are particularly well suited to the needs of habitual solo diners like myself (although I wasn’t alone on this particular occasion).

I’ve already given a preface of sorts to this experience in my previous post, so let’s jump right into it. I and my siblings joined the long queue that snaked across part of the scenic riverbank (or should I say “canal-bank”?) in front of the store – a visible manifestation, if it were ever needed, of the popularity of this restaurant and its one core product. 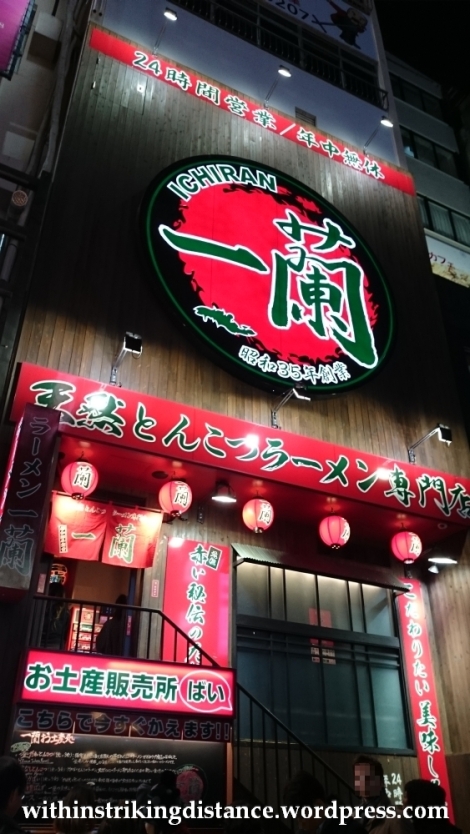 Many of those waiting in line appeared to be locals, but there also seemed to be a sizeable foreign contingent mixed in with the lot. In any case, the staff member marshalling the masses was clearly well prepared to deal with both Japanese and non-Japanese, since he was armed with more than one version of the printed form that Ichiran patrons use to convey their preferences (more about that later).

Several of Ichiran’s branches – including this one – operate round the clock, which means that patrons can get their ramen fix at practically any time of the day. 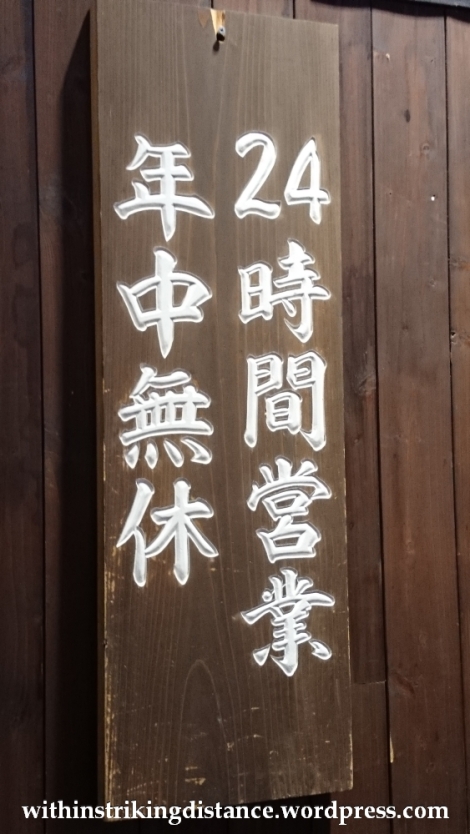 After stepping through the door, we approached the ticket machines where customers choose and pay for their orders. Put some cash in, press the buttons corresponding to your order, and out comes a small paper stub that you’ll exchange at your table for the actual meal. 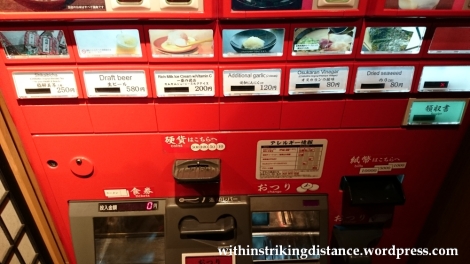 A basic bowl of ramen costs 790 yen. If you’re not particularly hungry, that’s really all you need.

As for myself, I went through the (by now) familiar routine of punching two buttons: the large green one for a ramen bowl and noodle refill combo (980 yen), followed by one of the smaller red buttons for a soft-boiled egg (120 yen). After several visits to the Ichiran chain, I’ve found this particular package to be the most effective means of both conquering hunger and maximising flavour.

After purchasing our meal tickets, we stood by and waited for seats to open up … which fortunately didn’t take long. 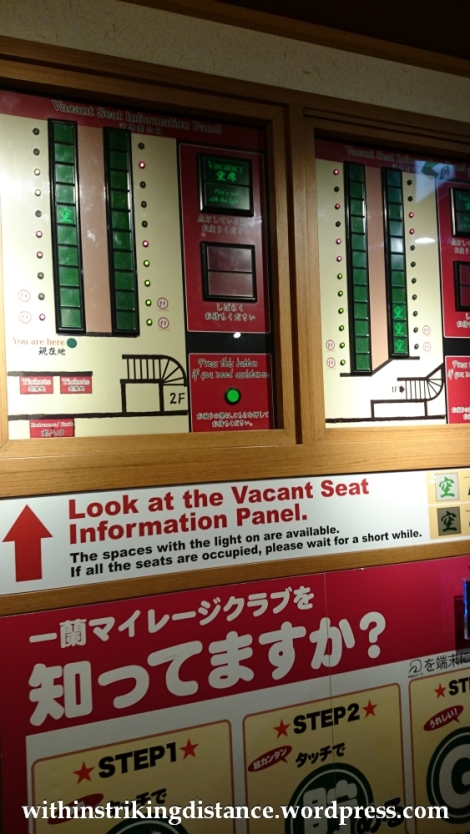 Most ramen joints I’ve seen consist of an open kitchen surrounded by a counter, where diners would perch themselves on fixed stools or chairs. I’ve also tried one that had restaurant-style tables and seats. But no other chain I’ve ever been to, whether in Japan or elsewhere, offered the same sort of dining arrangements as Ichiran did.

Take a look. At first glance, the layout might seem virtually identical to that of other ramen joints: long rows of stools around a central kitchen. 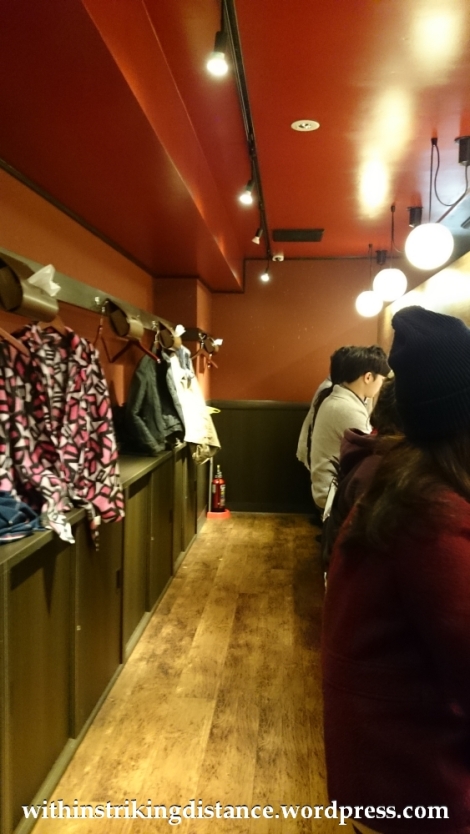 Now move closer. This is what a typical seat at Ichiran looks like. 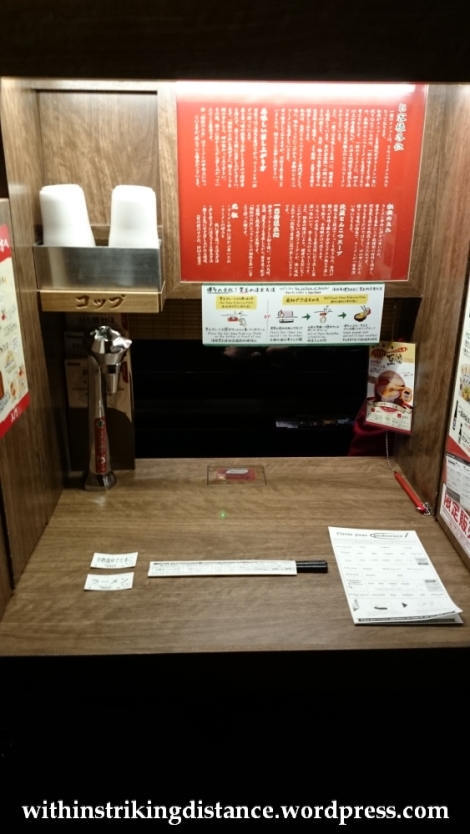 Instead of sitting elbow-to-elbow with your fellow patrons, Ichiran assigns each customer a personal stretch of countertop shielded on either side by wooden panels. (If you’re here with your mates, note that the panels are hinged and can be folded partway if desired.) The food prep area is also kept out of sight by a bamboo mat that staff will unroll as soon as they’ve served your order. In other words, what you’ve got is your own self-contained semi-private booth, complete with its own water dispenser – that’s the silvery spout on the left – and pretty much everything else you’d need to enjoy a meal.

As I’ve written in a previous review, I think it’s a stroke of genius – and one of the things that keep drawing me back to this chain. A key reason for my reluctance to eat out when travelling solo is the fear of committing some unforgivable faux pas in full view of the locals. (I’m sure the Japanese can be quite forgiving of baka gaijin who can’t use chopsticks properly, but the fear remains all the same.) With these cleverly designed booths, I don’t have to worry about any of my social errors becoming a matter of public record. I’ve got my own little world where I can freely stab food with my chopsticks if they keep sliding off, blow air on my noodles to cool them down, or commit any other crime against culinary norms that might otherwise get me branded persona non grata.

Now then, to work. Whilst waiting in line, you’ll be handed a form where you can choose the strength of the broth, the firmness of the noodles, the amount of spicy sauce to be added and so forth. An English version is available on request, or failing that – as I experienced at one branch – they’ll lend you a laminated translation so that you can make use of the standard Japanese form.

These were my stated preferences for this evening:

I submitted the form and my meal ticket to the kitchen staff, who returned a short while later with my order.

Here’s an edited snip from one of my previous Ichiran reviews. Nearly every word of this quote also holds true for the present visit – yes, including the part about salivating whilst I type.

Just look at that broth. Rich, milky, full of flavour and unbelievably delicious. I’m not exaggerating in the slightest when I say that my mouth is watering even as I type this… The tender yolk of the soft-boiled egg…boosted the richness of the soup even more, and worked so well with the whole dish… It took a lot of willpower to restrain myself from emptying the bowl of soup completely – it might be good for the tongue but I’ll surely regret downing all that sodium later!

After working my way through the bowl, I pressed the buzzer and asked for the kaedama (extra portion of noodles) that I paid for earlier at the vending machine. This was served piping-hot in a separate bowl, from which I slid the bundle into what was left of the delicious soup. I allowed the noodles to soak up the flavour, down the hatch they went … and that was the end of it.

Well, almost. I mentioned earlier that finishing all that salty broth – however scrumptious it might be – isn’t exactly good for one’s health. On the other hand, I remembered reading in a different blog that there’s a message glazed into the bottom of each black Ichiran bowl, so I poured the leftover soup into the empty kaedama dish and peered at the result.

Lo and behold, there it was. (Note that it’s written oldey-timey style … read it from top to bottom and right to left.)

“This (last) drop is the ultimate joy.”

I say … what a poetic way to end the meal.