Our family holiday in Japan continues with a trip to an ancient temple compound, featuring the oldest intact wooden buildings in the world … some of which have serenely witnessed the passing of more than 1,300 years.

From our home base near Ōsaka Station, Hōryū-ji Station in the town of Ikaruga (part of Nara Prefecture) was less than an hour away by JR (with a change of trains at either Shin-Imamiya or Tennōji).

At a roadside stop just outside the station, we boarded a small Hōryū-ji Line bus and rode it all the way to the last stop, Hōryū-ji-mon-mae. If I were travelling solo, I might have gotten off one stop earlier (Hōryū-ji-mae) and enjoyed a leisurely stroll down the long tree-lined road leading to today’s destination, but the terminus offered shorter and better access for my parents (who weren’t overly fond of walking).

Not far away stood a suitably ancient-looking gate … suitable, that is, in view of the sacred precincts we were about to enter.

Those precincts belonged to Hōryū-ji, established in A.D. 607 and one of Japan’s most ancient temples. Some of the buildings here are supposedly the oldest wooden structures still standing, not merely in the country but anywhere on earth. The sheer antiquity of the site was undoubtedly a key factor in its inscription as a UNESCO World Heritage Site in 1993, the first place in Japan to earn the distinction.

Incidentally, despite the fact that the gateway pictured above – Nandai-mon – is nearly six centuries old, it’s still far younger than some of the buildings we’ll see shortly.

From the southern entrance, we walked along a stone-paved path flanked by tile-roofed walls in order to reach Hōryū-ji’s western compound, the Sai-in. 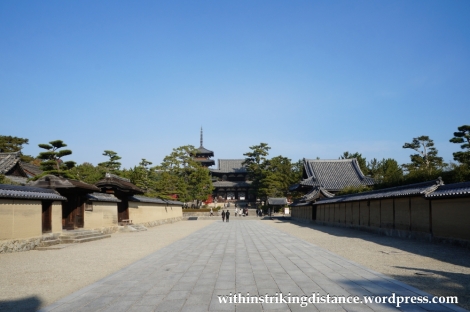 The Sai-in’s main portal – Chū-mon, on the right side of the snapshot – dates from the late Asuka period (more specifically around A.D. 700), which means that it’s a whopping 1,300 years old. Rising up behind it is the temple’s equally ancient pagoda, which we’ll have a closer look at later. 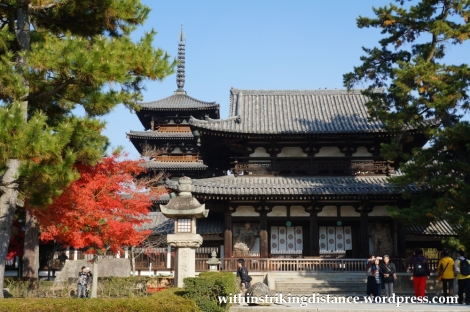 At the entrance, we paid the rather expensive admission fee of 1,500 yen (per person) and stepped into the Sai-in precinct, where crowds of visitors were out in force and taking full advantage of the splendid autumn weather.

To help set the scene, here’s a bird’s-eye Google Maps view of the enclosure with all of the key features clearly visible.

Right then … let’s go for a walk and have a better look at some of Hōryū-ji’s’s architectural treasures.

The temple’s towering Gojū-no-tō (five-storey pagoda) stands over a hundred feet tall. Its precise age is a matter of debate, but even the younger estimate for its completion date – sometime in the early A.D. 700s – puts its age at over 1,300 years.

Next to the Gojū-no-tō is the temple’s main hall, the so-called Kondō, parts of which may be several years older than even the ancient pagoda and main gate. A large part of the structure was severely damaged by fire in 1949, but thanks to restoration work carried out in the early 1950s, the building still retains much of its original beauty.

A stone-flagged path between the Gojū-no-tō and the Kondō leads to the Daikōdō, or “Great Lecture Hall”, which was once used by monks for their studies and for memorial services. Destroyed by fire during the Heian era, the hall was rebuilt by A.D. 990, which makes it “only” a thousand or so years old (several centuries younger than some of its neighbouring structures). 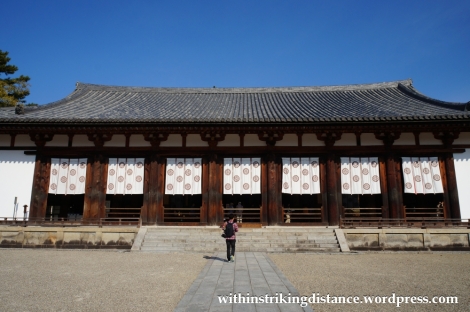 On our way out of the central compound, we passed through Hōryū-ji’s long higashi kairō (east corridor). Normally one wouldn’t pay much attention to a mere temple corridor, but at over 1,300 years old, this was a treasure in its own right. Indeed, due to their inestimable historic and artistic value, all of the main features of this enclosure – the main hall, the pagoda … yes, even the surrounding corridors – are officially-designated National Treasures of Japan. 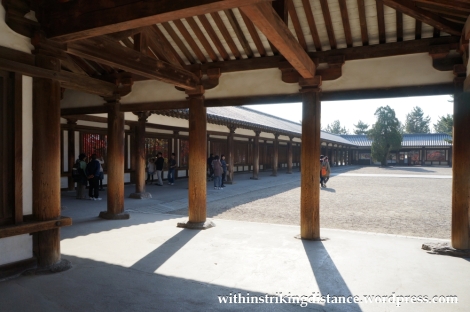 Pause for a moment in the corner. The view of the central compound with the pagoda and main hall might be worth setting aside a tiny sliver of your camera’s memory card space for.

Just outside and east of the central Sai-in precinct stands the Shōryō-in, completed in 1284 (during the Kamakura period) and also a designated National Treasure of Japan. This is the southern tip of what was once used as a dormitory for resident monks, but was later rededicated as a memorial hall for the veneration of Hōryū-ji’s semi-legendary co-founder Prince Shōtoku.

The site is so richly endowed with state-designated National Treasures and Important Cultural Properties that even structures once designed to serve fairly mundane purposes now bear these special titles. The corridors we saw earlier, for example … and even this rather plain-looking Heian-era storehouse, the Kōfūzō. 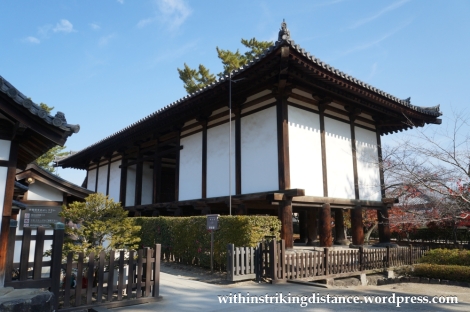 North of the Kōfūzō is the Daihōzō-in, a modern museum completed in 1998 where some of the temple’s most precious and fragile treasures are exhibited in controlled conditions. I can’t recall if photography was prohibited within its galleries – I don’t have any images from there in my files – but I certainly think it shouldn’t be missed, especially not by anyone with more than a passing interest in Japanese history and art.

There’s more to see in Hōryū-ji’s eastern compound, a few hundred metres away – but we were short on time and decided to press on towards our next stop of the day. Back at the Hōryū-ji-mon-mae bus stop, we boarded the next available service bound for the JR station.

Since this was the terminus of the short Hōryū-ji Line, the bus remained at the stop for a little while whilst waiting for the scheduled departure time. This interval allowed me to take a couple of shots that I wouldn’t normally attempt on a moving vehicle.

This one is of the farebox. Paying in cash? Sure! Haven’t got coins? No problem! 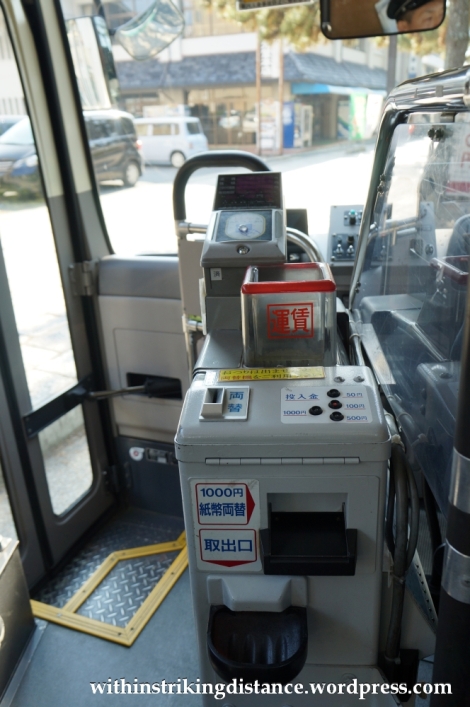 Slip a 1,000-yen note into the slot, out comes the same amount – transformed into coins – through the little spout just below. Drop the exact fare into the larger receptacle at the top (no change is given, unfortunately) and off you go.

There’s also a newer-looking addition mounted on the side: an IC card reader, ready to accommodate passengers who would rather pay their way using IC cards. Note that even though most of Japan’s major IC cards have been virtually interchangeable since March 2013 (details here), a number of smaller transport networks haven’t signed up to the universal scheme, and continue to use only their own cards (or just one or more of the major cards). In the case of this bus line, the small label stuck onto the lower-right corner of the notice board… 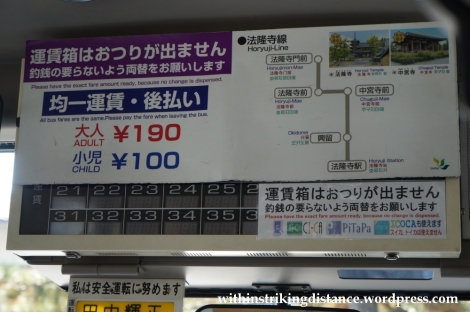 …clearly states that JR West’s ICOCA (widespread in the Ōsaka area) and a few other regional IC cards can be used to pay fares, but JR East’s SUICA (popular in Tōkyō) and JR Central’s TOICA (from Nagoya) are specifically mentioned as being NOT accepted for payment. One would also assume that other major IC cards aren’t useable either.

A couple of other good-to-know items from the notice board: this bus line has just five stops (I did say it was short), and a flat fare of 190 yen for adults is charged regardless of the distance travelled. Bear in mind that this was back in November 2014 – changes to the service, fare, means of payment and so forth may have come into effect since then.

Not long afterwards, the bus departed on its brief run to Hōryū-ji Station, where we headed for the Nara-bound platform…

…and waited for the train that will speed us off towards our next destination.