Every visit to Japan is full of surprises, but who could have imagined that a hankering for ramen would land me in a police station?

A monstrous exaggeration? Undoubtedly so. Yet I invite my gentle readers to go on a nighttime walk along the neon-lit lanes of Dōtonbori, after which they might see the second of those two stereotypes inch more than a few steps towards plausibility.

After returning to Ōsaka Station from our day trip to Kyōto, mum and dad broke off to do their own bit of exploring in the vicinity of our hotel. As for the three overgrown children in our party – myself included, of course – we were feeling rather peckish and chose to venture out a bit further, towards a part of the city known for its blazing lights and busy kitchens.

The Dōtonbori canal in the Nanba district: a 17th-century artificial waterway running through the heart of the city, originally built in the name of commerce and now the namesake of what might well be the pulsing nerve centre of Ōsaka’s lively food scene. When I was last here a few months earlier, my mind was set upon catching a glimpse of the area’s blindingly colourful nightscape, with gastronomy no more than a blip on the radar screen. On this occasion however, it wasn’t so much a feast for the eyes but a feast for the stomach we were in dogged pursuit of.

Now then … about that run-in with the police.

Sampling local specialities is all well and good, but I was struck by a rather intense craving for my favourite Hakata-style ramen. As such, our first target for that evening was a decidedly non-homegrown chain from distant Fukuoka – the name of which should be quite familiar (perhaps sickeningly so) to regular visitors of this blog. After discovering that my chain of choice had a branch in the Dōtonbori area, I took note of the address and set out towards the spot, eager for another taste of my beloved noodles (and a first-time encounter for my siblings who hadn’t tried it before).

Well, the map and the address were accurate enough (as I later discovered), but due to the lay of the land we failed to spot the store after a fair bit of walking. Rather than give up on our quarry, I chose to seek help from the people who probably knew the area best…

…which meant paying a visit to the nearest police outpost, or kōban as they’re referred to locally.

Anticlimax? Oh come now, Diego’s no troublemaker – or at least he pretends not to be. Surely you didn’t think that little mention of a police station meant something about being arrested, now did you? (^_^)

In any case, I popped inside and politely asked if anyone spoke English. They replied in the negative, so I switched to my halting (but passable) Japanese and asked for directions to the place we were searching for. I was expecting them to trace out the route on the detailed neighbourhood map they keep for this purpose, but got more than I bargained for when one of the officers very kindly stepped out and led the way almost to the shop itself.

And to eliminate every last trace of ambiguity, this was the place we were searching for.

Well, that’s one knotty problem all nicely sorted out. We tucked into a delicious ramen dinner, which I shall write about in a separate food report (complete with the usual mouth-watering photographs, of course). Here’s a one-image preview of that experience:

More on that in the next post, my friends. For the moment, let’s move on.

After dinner – which was hearty but not quite gut-busting – the three of us decided to explore the area a bit further, perhaps tucking into a bit of street cuisine along the way.

Some of the best views of the shimmering sheets of neon that are this district’s pride and joy can be had from the bridges that cross the canal. (I’m not particularly pleased with this visit’s harvest of snapshots from that vantage point, so I won’t bother posting them here, but the overall scene was nearly identical to what I beheld the last time I came to the area.) Below the level of the bridges, along the banks of Dōtonbori itself, the scene was somewhat quieter with the crowds not quite so thick (though there were still plenty of visitors about). Down here in the depths, the traffic was more nautical than vehicular, consisting entirely of the bright yellow cruise boats that ply this watery route. 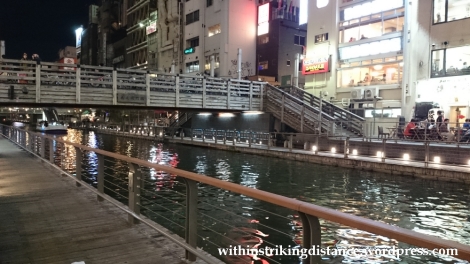 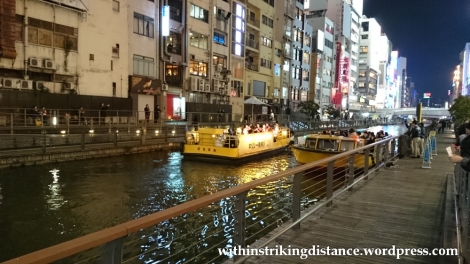 Back up to street level, a galaxy of brightly lit signs touted one gastronomic delight after another to the passing crowds. The more interesting ones featured giant representations of the specialities on offer, which included fugu… 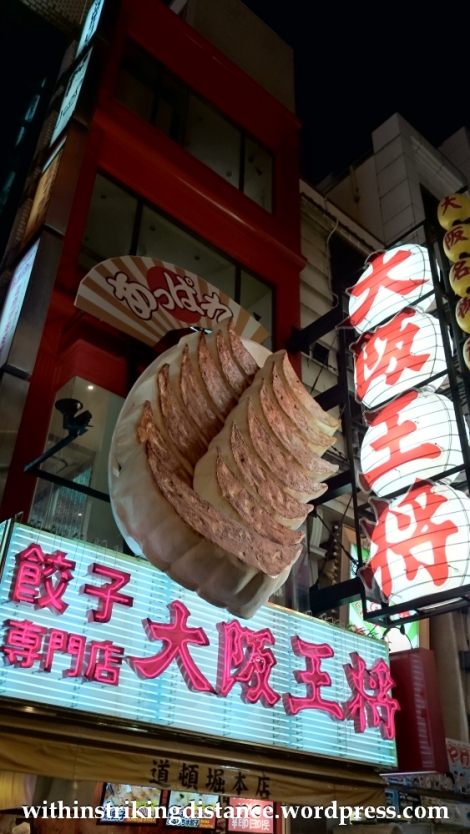 …and of course, that ever-popular Ōsaka treat, takoyaki. 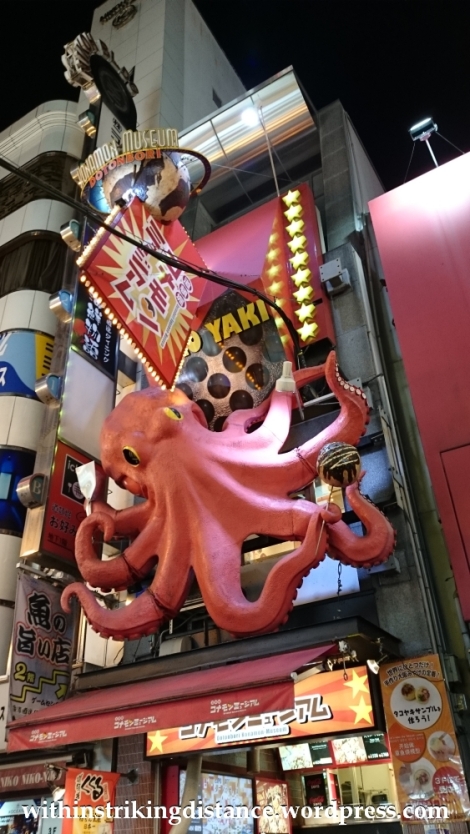 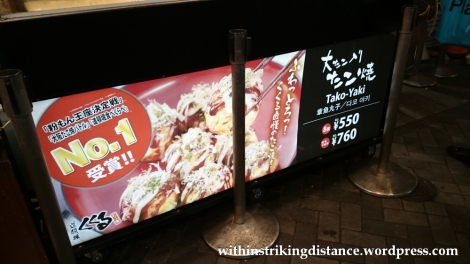 This particular place kept drawing passers-by into its rather lengthy takeaway queue, thanks in no small part to the street-side kitchen that allowed visitors to glimpse the entire production process. From the empty-greased-pan stage to the pop-those-balls-out-of-them-sockets stage, every juicy detail was laid out in the open for all to see.

I wasn’t particularly interested in the end product – thanks, or rather no thanks, to my intense loathing of most seafood – but my brother and sister were only too happy to queue up for their share of the spoils. 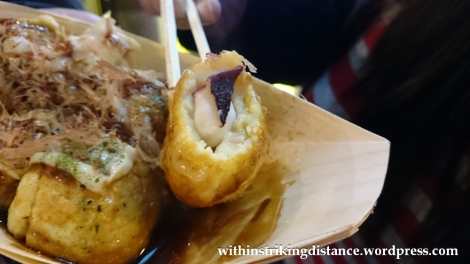 With that, our evening’s activities drew to a mouth-watering close. But after tomorrow’s sightseeing, we’ll happily wind our way back to Dōtonbori, this time to sample another local dish in a quieter indoor setting.