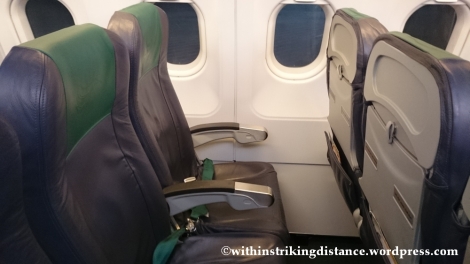 No-frills airlines don’t have much of a reputation for quality and service. But on short hops between A and B, one often finds that they can do the job just fine.

Note: Schedule/route information, equipment type and other details are accurate only for the specific flight reviewed here and do not necessarily apply to previous or future flights, even by the same airline under the same flight number.

The airport service charge for Manila (PHP 550.00) was collected manually at the airport. As a Filipino citizen, I also had to queue up and pay a travel tax (PHP 1,620.00) at the airport before check-in. Note that tickets purchased through travel agents or brick-and-mortar offices will often already include the travel tax, and some airlines allow passengers to add it electronically when booking online – but Cebu Pacific doesn’t have this simple time-saving option on their website. (Go figure.)

Like all of Cebu Pacific’s flights, 5J 312 was assigned to Terminal 3 of Ninoy Aquino International Airport (about which I’ll have more to say and show in a separate field report). The boarding point for many budget airline flights – ours included – was located in a cluster of gates near the far end of the international wing, a much longer distance from the entrance than the gates reserved for full-service airlines like Delta and Cathay Pacific. Not such a bad thing in itself, except that not all of this airport’s travellators are currently operable, so budget passengers face a pretty long hike to get from immigration to their assigned gate.

Welcome to the world of no-frills airline travel, where the no-frills treatment starts on the ground. (^_^)

Boarding began about half an hour before our scheduled departure time.

Say hello to our bird.

Standard 3-3 cabin configuration, upholstered in the traditional Cebu Pacific colours. (Yellow forms a big part of their current aircraft livery, but their logo and aircraft interiors are still mainly blue and green.) As one might expect from a budget carrier, the seats were narrow and legroom was limited, but given that I’m not a large fellow this was of little concern to me. 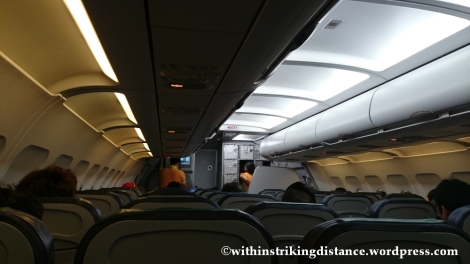 The seats were fairly comfortable, but then again, this was a short flight (about 2 hours) so comfort wasn’t as much of an issue as it would have been on a long-haul route. (A flight of more than 4 or 5 hours in length isn’t something I’d ordinarily entrust to a no-frills airline.) Cebu Pacific operates using a single-class configuration on all of its services, so upgrading to a premium cabin isn’t an option for those requiring more comfort or space; the best one can do is fork out some extra cash for a front-row or exit-row seat.

Non-existent. They’ve got an in-house magazine, and this airline is famous (or infamous) for running quick inflight games that are usually just another opportunity to advertise their services or a sponsored tie-in of some kind. Other than that, your best hope for entertainment is closing your eyes and sleeping away the time.

Or eating, which we’ll get to shortly.

Travelling on a limited-service airline usually works best with limited expectations. Having said that, I was quite satisfied with the cabin crew’s performance during our flight. Polite, patient, prompt with handling requests . . . not much more one can ask, really.

I generally skip meals when travelling on budget airlines, mainly because they cost extra and tend to be hideously overpriced. Having said that, I decided it was worth trying for the experience and pre-ordered their Thai Chicken Curry with Mangoes (PHP 350).

Their website gives the following grand description of this dish:

Sounds delicious! In theory. Now let’s see if the reality lived up to the hype.

One benefit of pre-ordering over buying on board is that the meal comes with a complimentary beverage, which can save you a little money. (The price for the meal itself is the same, but passengers buying food during the flight aren’t served free drinks.) Bear in mind that like other budget carriers, when it comes to refreshments Cebu Pacific will give you absolutely nothing for free – not even water – so even this marginal benefit might tip the scales for some passengers.

Foil container with a handwritten label. Disposable plastic cutlery. Paper mat in place of a tray. No condiments or side dishes. We’re certainly very far from full-service airline quality here.

The cover comes off, and we are greeted with the following sight.

Obviously not as attractive as the staged menu photos, but at least it didn’t look as if someone had detonated a hand grenade in there. I’ll grant them a flat passing mark for presentation.

For what it’s worth, the meal wasn’t bad. There were hardly any mangoes in the end product and I’m not sure if they actually contributed anything to the dish flavour-wise, but I suppose I’d eat it again if it were offered to me for free or at a steep discount.

“Free” and “discount”, of course, being the operative words. Considering the small portion and the tiny beverage, it certainly didn’t seem like it was worth the PHP 350 I paid for it. (And considering how I recently paid far less for a meal on a rival budget carrier, I’m not convinced that the price point is appropriate for this class of airline.) Better save your money for a far more substantial meal at the airport.

The service may have been basic and the facilities spartan, but considering that it was a budget airline flight costing a fraction of the amount I would have paid on a rival full-service carrier (yes I checked), I’ve got little to complain about.

Well, I do have a complaint about the food … but it’s more to do with the exorbitant price rather than the quality of the product.

Moreover, our pilots got us to Taipei on time. This isn’t always the case – I’ve suffered my fair share of delays and cancellations, on this and other airlines – so it was certainly a good way to cap the evening’s service.

My final verdict: I will probably fly with Cebu Pacific again on the same route, provided that they keep their fares competitive.