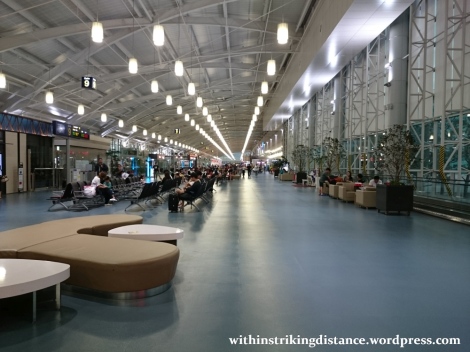 Today, let’s take a look at what it’s like to fly from Busan’s Gimhae International Airport (PUS), one of the main gateways to South Korea’s second most populous city.

The information presented here is current as of the day I used the airport (06 June 2017). Schedules, facility information, etc. may change anytime and without prior notice. I observed some construction/renovation work within the international terminal at the time of my visit, which increases the possibility of future operational changes.

Limousine/express bus services are a convenient way of transferring between the airport and various points in downtown Busan. For my part, I boarded an airport-bound limousine bus from the stop near Busan Station, as it was the closest one to my hotel. This particular boarding point will also be convenient for passengers connecting from the urban metro, the KTX, and other train services that terminate at this railway station.

Here’s the timetable for the airport limousine bus stop at Busan Station, followed by a map showing the stop location. The one-way fare to PUS was KRW 6,000 from this boarding point. Note that these details were current as of the date of my trip (06 June 2017), but may change without notice. 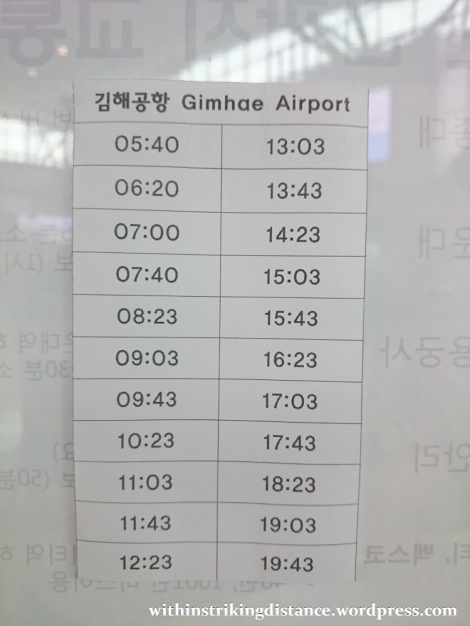 The location of the airport bus stop is marked in the upper left section of the map, near the subway exits. 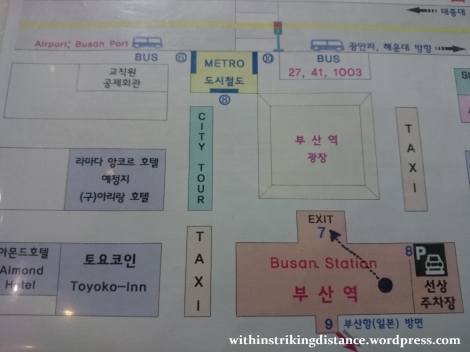 Both the tourist information desk at Busan Station (where I snapped the two pictures above) and the reception staff at my hotel estimated the required travel time to PUS as “about 1 hour”. A little too vague for comfort, perhaps, but understandable given that traffic conditions are difficult to predict. In any event, the limousine bus swung by just before the scheduled 1543 departure time, left precisely on the minute, and – with light to moderate traffic volume along the way – arrived at the airport’s international terminal about 40 minutes later.

The limousine bus I took from central Busan stopped at the international terminal first, then proceeded to the domestic terminal nearby. Even if one gets off at the wrong terminal, the two are within walking distance of each other so transferring shouldn’t be too much of a challenge.

Note that PUS is also served by the Busan–Gimhae Light Rail Transit line, which offers connections to the Busan Metro at Daejeo (Line 3) and Sasang (Line 2). There are no direct rail links between PUS and downtown Busan.

Taxi services to/from the city centre are also available – though needless to say, they will set you back far more in terms of cost than a bus ride.

From the bus stop on the pavement just outside the international terminal, I hauled my luggage through one of the doors near the southern end… 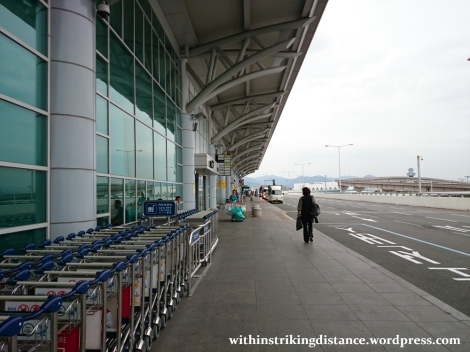 …and into the second floor departures level of the terminal building. The check-in lobby is well-lit and spacious, though bear in mind that the available seating is extremely limited. 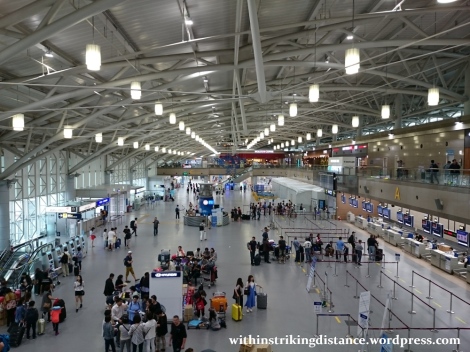 Self check-in kiosks are available for passengers travelling with select airlines. Everyone else – myself included – will need to queue up at the conventional check-in counters arranged along the back wall. 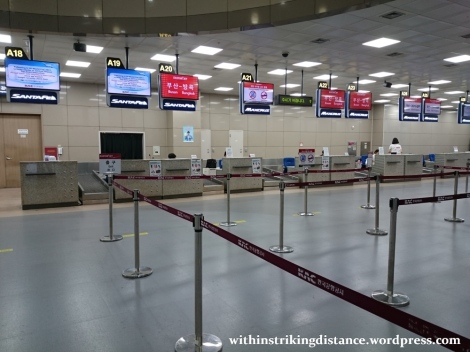 Retail and dining options in the public zone are fairly limited, though that’s not surprising for an airport of this size. (There’s more for retail but less for dining in the restricted zone after immigration; we’ll have a look at those later.) You’ll find the usual booths, of course: airline service counters, telecommunications companies, bureaux de change, etc., as well as an information desk with very helpful staff near the centre of the hall. I didn’t do a lot of exploring over at the southern side of the second floor, but here on the northern end (near the counters assigned to my airline), I spotted only one café-bakery, a bookshop, a pharmacy, and a shop selling sweets and souvenirs.

There are several restaurants and cafés – along with more telecoms booths – in the small commercial zone on the third floor. One of the larger eating establishments is a food-court-style concept, with different cuisines and specialities represented.

I don’t usually take pictures of airport washrooms; it’s a private area for private business, after all. Nevertheless, I can report that the gents’ side appeared clean and well maintained.

And that’s about it – not much going on out here. But I do love the luggage-shaped dustbins. (^_^) 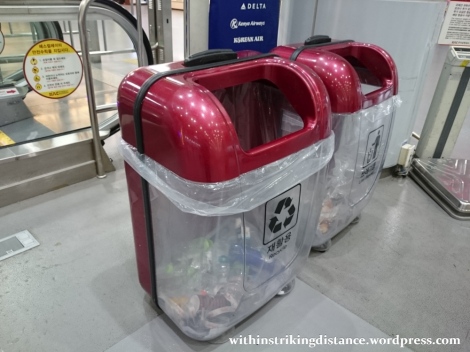 There’s free WiFi available in the landside area. A bit spotty, but it (mostly) does the job.

Check-in, security, and immigration were all fairly smooth, with the queues much shorter than the infamous lines over at Seoul’s far busier Incheon International Airport. That said, perhaps I was just passing through at a non-peak hour.

And here we are. Let’s get settled in for the flight ahead. 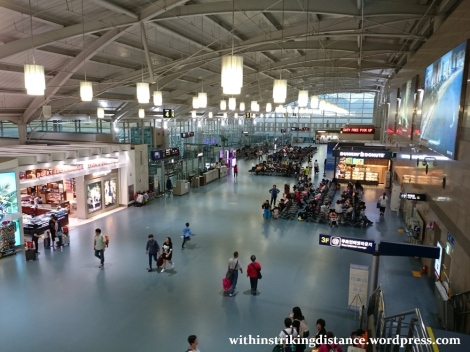 Unlike at the check-in lobby, there’s plenty of seating to go around here. That said, most of the available spots filled up as the evening flights were getting ready to depart, so you’ll want to lock in a place as soon as you can.

Near the gates, one can choose between conventional airport seats (some equipped with USB charging ports), café-style armchairs, and cushioned platforms with tables of the same height (like the one in the lower-left corner of the picture below). The last option is perhaps the most versatile: you can sit on them in the usual fashion, or you can stretch out for a nap (with due consideration for other users of course!), or (as I saw a lot of people do) treat them like Korean floor seats and perch close to the edge cross-legged, with drinks and snacks within easy reach on the tables nearby.

For a little peace and quiet, head up to the third floor (note that the gate level is actually the second floor of the building) where one will find more seating, along with restaurant-style chairs and tables. There’s also a row of computers for public use, and a small “garden” – more of a large planter box, really – to enliven the atmosphere. 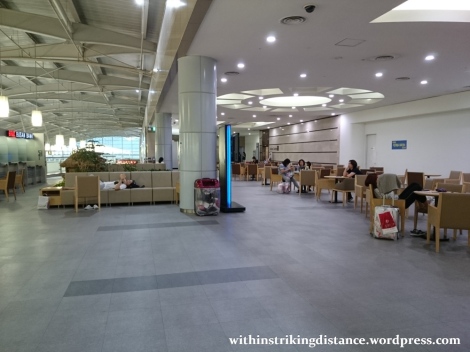 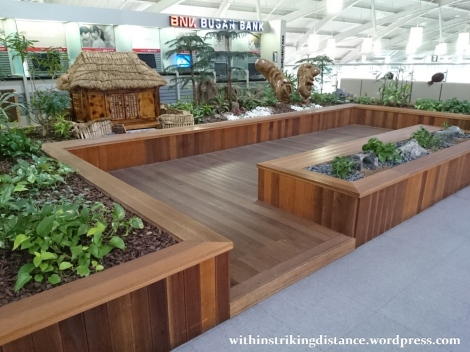 Two airline lounges are located on this level, though I couldn’t get into either one as I was travelling in cattle class. Back down on the second floor, there’s also the Sky Hub Lounge, whose clientele appears to consist mainly of holders of certain credit cards and lounge programme memberships. 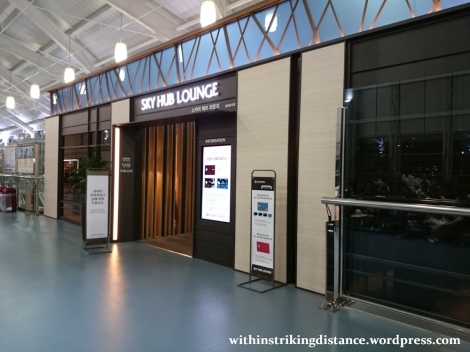 For those with cards to swipe and extra won (or indeed any major currency) to burn, there are two large duty free shops in the airside zone. As a matter of fact, they’re the first establishments you’ll see after going through immigration. 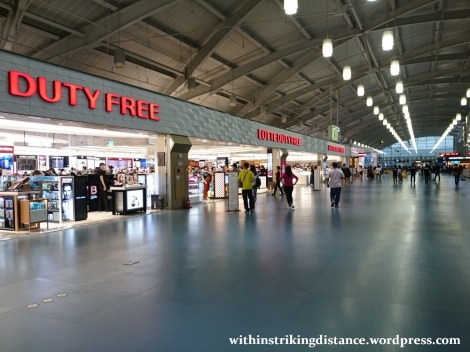 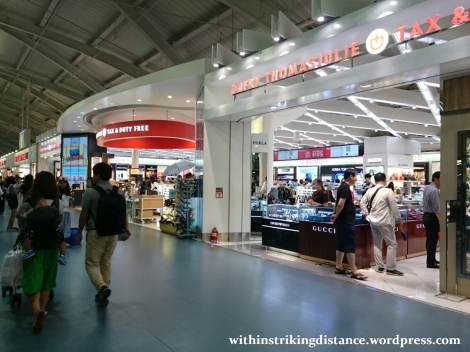 If you’ve done any duty free shopping at major department stores before coming to the airport, the claim counters are located on the northern side (turn right after immigration). 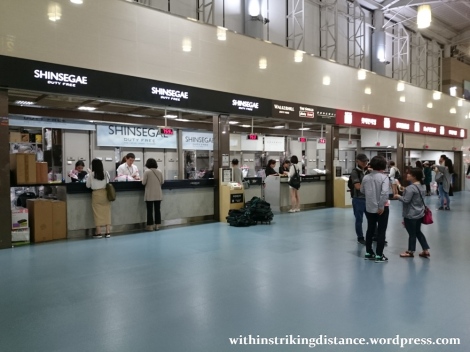 Now if duty-free shops strike you as being a little too fancy (or expensive), there’s a well-stocked 7-Eleven convenience store in the southern side (left after immigration), right next to a nail/foot spa. Here you’ll find pretty much anything that might rear up as a last-minute pre-flight necessity: Korean snack items to take home as gifts, electronic accessories, toiletries, basic stationery … you name it. And, of course, let’s not forget the usual beverages and food items that one would expect to see in a convenience store, from sandwiches and gimbap to pre-packaged meals.

Speaking of food and drink, there aren’t any full-service restaurants airside (none that I saw at any rate), but there are several options that are good for a light meal or snack. 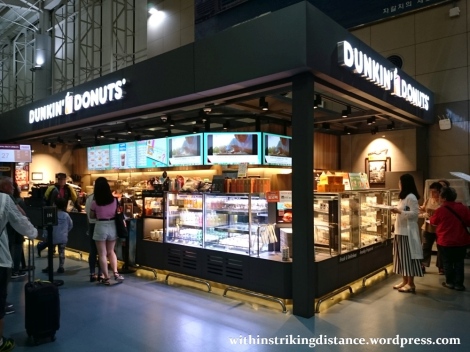 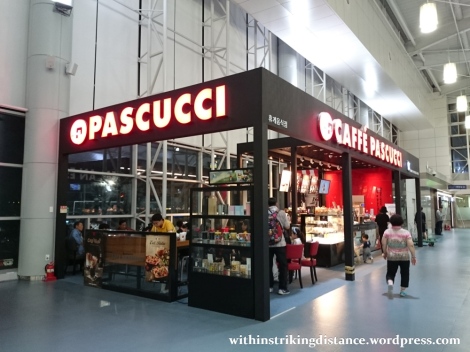 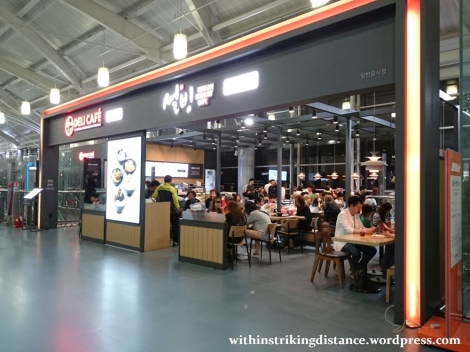 If memory serves, that shop in the third picture also has a small selection of hot meals (complete with rice) on their menu, so it might be worth considering if the lunch trays at the 7-Eleven don’t seem too appealing.

As for basic facilities, the airside toilets were fully equipped and well maintained. I also spotted a sign for a room that might be useful for mothers with infants. 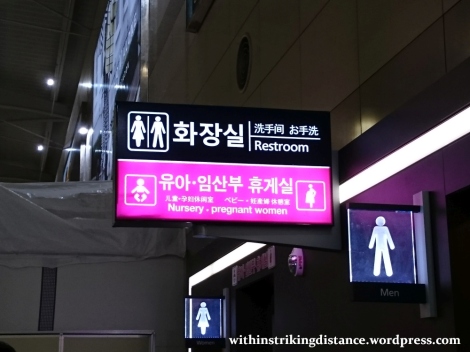 I’m not a smoker, and can’t even stand the merest whiff of tobacco … but if you’ve got a soft spot for the puffing stuff then there’s a place designed just for you. 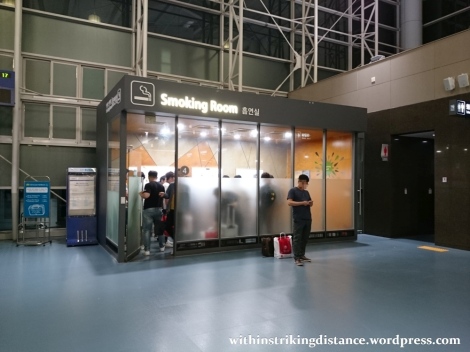 There’s only one large flight information board in this part of the building, right above one of the duty free shops. Flat-screen TVs mounted on tall stands serve the same purpose in the areas close to the gates. 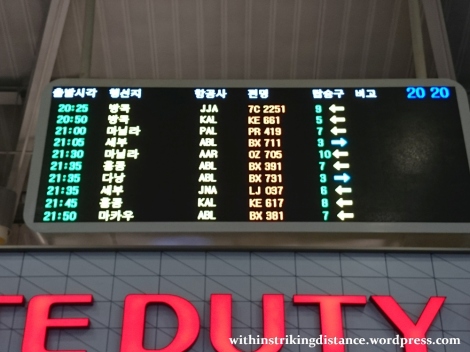 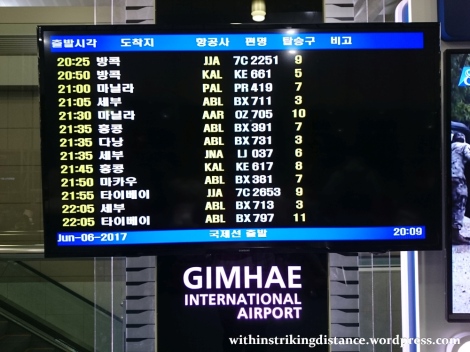 Speaking of flight information, the public address system might need a little tweaking. I don’t know if it’s the personnel doing the announcements, or the hardware, or both, but I could barely understand the verbal notices being issued over the PA system (not even when I was standing almost directly underneath a set of speakers).

One other thing they can improve on: the WiFi. Or lack thereof. There may be free wireless internet landside, but there isn’t any airside (except for intermittent signals probably bleeding in from the public zone); I even checked with a staff member who confirmed that the restricted area wasn’t so equipped. On my hunt for WiFi, I recall noticing signal names corresponding to the airline lounges, so perhaps the privileged few with the requisite access are catered for in that regard – but it seems the common man will have to pay up or go without.

As for entertainment, I believe there are TV screens showing Korean news programmes near the gates (my doubt stems from the fact that I barely glanced at them). On the southern side, I also remember seeing an upright piano that members of the travelling public could play at their leisure. At the time, it had been taken over by a swarm of children, and after a while I got sick of hearing mangled versions of “Chopsticks” played over and over and over again by eager young hands. (^_^)

Well, I believe we’ve exhausted the facilities and diversions PUS has to offer. Time to park ourselves near the gate and wait for the boarding announcement. 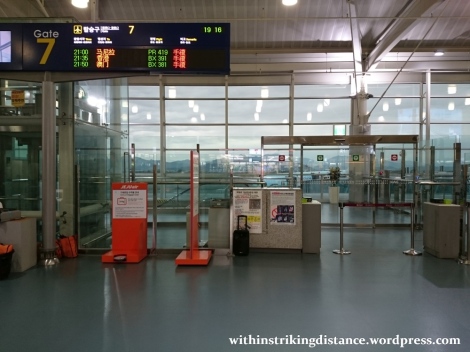 I should also mention that whilst PUS is equipped with aerobridges, some gates are served by buses which ferry passengers to aircraft parked in more distant stands. Such was the case with the flight I took. 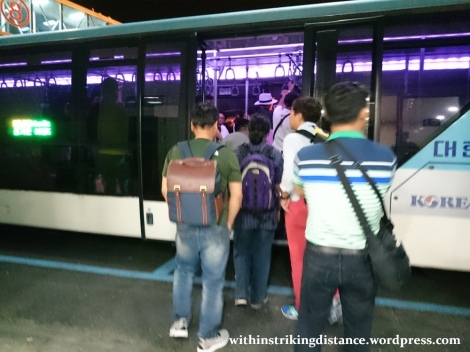 Gimhae International Airport is the fourth busiest in Korea, but the traffic that passes through here is still significantly lower than what numbers one through three on the list currently handle. Indeed, considering the relatively small size of the lone international terminal at PUS, there wasn’t much in the way of crowding or queuing.

That said, there also wasn’t much in the way of shopping or dining. Nonetheless, one will find all the basics and then some, housed in a clean and pleasant terminal that (despite its fairly small size and limited facilities) offers a far more positive experience than my home city’s main airport. Theatres and playgrounds and concert stages and cultural experiences and all those other non-essential things that some of the world’s best airports often boast of are well and good – but for a non-demanding passenger like me, PUS ticks all the boxes.