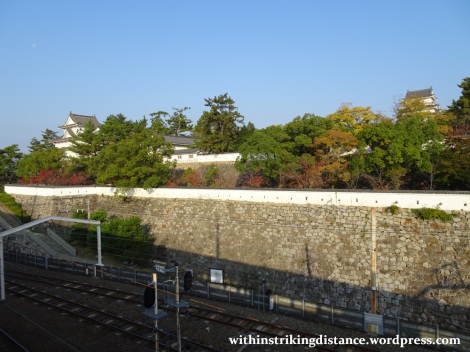 A short hop on the San’yō Shinkansen brought me to Fukuyama, near the border between Hiroshima Prefecture and Okayama Prefecture. Although this place doesn’t figure very highly in Chūgoku itineraries – save perhaps for the lovely old port of Tomonoura in its southern reaches – history enthusiasts will no doubt share my interest in the city’s castle and the splendid prefectural museum nearby.

The shinkansen ride from Hiroshima takes less than 30 minutes. If the map says any different, it’s probably giving you a route based on slower train services, or a bus/car ride.

I didn’t have long to spend in Fukuyama, since I’d budgeted the rest of the day for sightseeing in Hiroshima itself. Thankfully, the two main attractions that lured me here were located within a stone’s throw of the train station.

And I mean that (almost) literally.

In fact, before leaving the shinkansen platform, take a few minutes to peek through the windows on the northern side. You’ll be greeted with the sight of a massive Edo-period fortress that was my main reason for taking the trip. 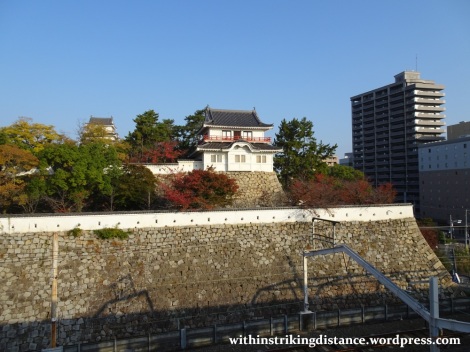 Work began on Fukuyama Castle (福山城, Fukuyama-jō) in year 5 of the Genna Era (1619). Completed in Genna 8 (1622), the castle served as the headquarters of the Fukuyama Domain, which was then under the control of its first lord, Mizuno Katsunari, a cousin and vassal of the shōgun Tokugawa Ieyasu. The domain – and the castle along with it – changed hands a couple of times up to the end of the Tokugawa shōgunate in the late 19th century. However, with the exception of a brief period under shōgunal administration, all of Fukuyama’s ruling lords were fudai daimyō: hereditary Tokugawa vassals assigned to control strategically placed domains that would collectively serve as a bulwark against the less trusted tozama daimyō. For this reason, Fukuyama Castle was built to impress the might of the central authority upon the nearby domains of tozama daimyō, with the Tokugawa government providing both financial support and materials salvaged from the former Fushimi Castle in the Kyōto area. Decommissioned in the 1870s after the fall of the Tokugawa shōgunate, most of the castle’s defensive turrets were soon demolished, and much of what remained was reduced to ashes by Allied bombing raids during the closing stages of the Second World War. As part of celebrations marking the 50th anniversary of Fukuyama’s elevation to city status, the main tower and a couple of other structures were rebuilt in 1966, although – in keeping with common post-war practice – inauthentic concrete rather than authentic wood was the material of choice for the reconstruction effort.

Yep, that about covers it. Enough chit-chat – let’s head out.

The castle’s outermost walls have long been lost to war and development, but the soaring cliffs of carefully fitted stone that once protected its inner ninomaru and innermost honmaru enceintes have survived more or less intact. 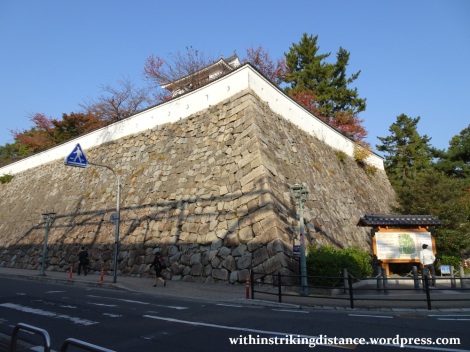 As I entered the site, I actually skipped the castle itself and headed straight for a museum on the grounds – but we’ll have a look at that later. For the moment, let’s rearrange the day’s route slightly and take on the castle first.

Now there’s more than one way into the compound. I chose the narrow path that you see above, sandwiched between the long train station to the south and the towering walls to the north. Up a long set of stairs, round a corner…

…and there I was, face to face with the castle’s Fushimi-yagura. This defence tower was one of the buildings salvaged from the old Fushimi Castle – more specifically, Fushimi Castle’s former Matsu-no-maru Higashi-yagura – and reassembled here when Fukuyama Castle was under construction. 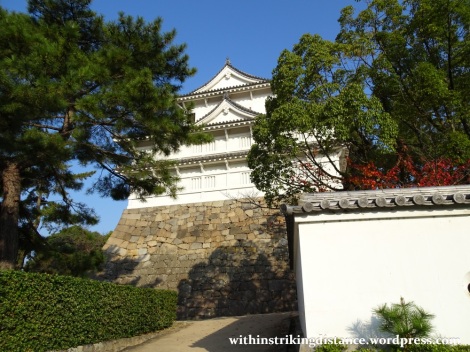 Next to the Fushimi-yagura stands the formidable Sujigane-gomon, another structure transported from Fushimi Castle. Both this gate and the Fushimi-yagura were designated as Important Cultural Properties in 1933. Miraculously, they also survived the 1945 bombing raid that levelled other parts of the compound, and today stand amongst the few tangible remnants not only of one castle, but of two (Fukuyama and Fushimi). 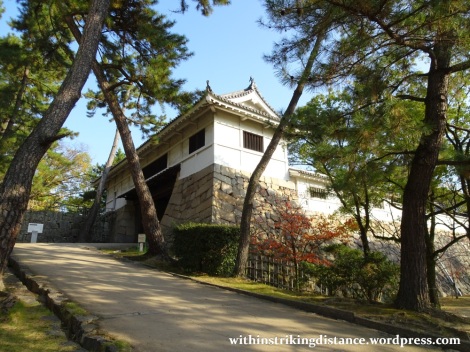 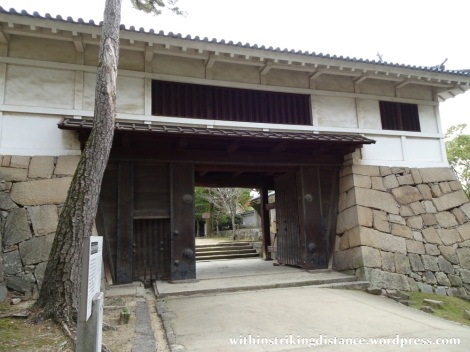 I entered the castle’s innermost honmaru compound through this gate. A short distance away, I came upon the reconstructed Kane-yagura. (The second shot below was taken from outside the honmaru, as I was heading back from the museum I’d visited.) It’s an unusual structure for a castle, in that the roofed upper floor houses a bell – indeed the name Kane-yagura literally means “Bell Turret”.

I crossed the open ground where one of the domain lord’s lavish palaces once stood, heading towards the soaring tenshukaku (main tower) of Fukuyama Castle.

A small number of Japan’s castles – 12, as a matter of fact – still have their original centuries-old wooden tenshukaku. An even smaller number have had their lost main towers rebuilt in the modern era using traditional materials and techniques, with the end result being a more-or-less faithful reproduction of the original. The largest number, however, consists of castles with tenshukaku rebuilt out of concrete and other modern materials, either with or without attention paid to at least making the exteriors look historically authentic. Fukuyama Castle falls in that third category, with the reconstructed ferro-concrete main tower housing museum space – a pity, to be sure, although perhaps a necessary compromise in the decades after the war when Japan was still emerging out of the ashes of conflict.

In any event, the top of the tower offered the usual fantastic views over the surrounding city. 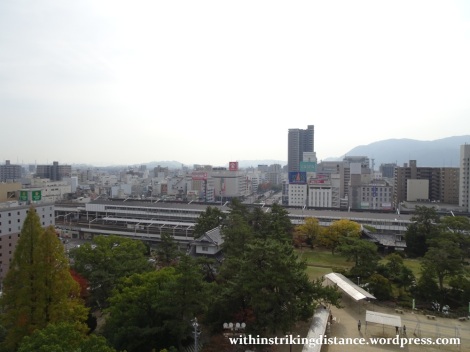 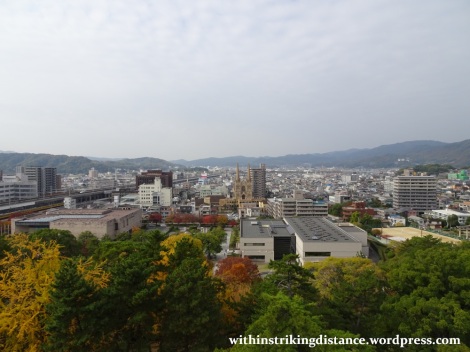 Something else caught my eye from that lofty perch: a set of large, flat stones arranged in a familiar pattern on a field in the shadow of the main tower. I’m not certain, but if I were to take a stab at it I’d imagine these were the original foundation stones of the tenshukaku – a slab for the central support pillar in the middle, surrounded by bases for other columns – perhaps excavated and relocated safely out of the way when the modern copy was constructed in the 1960s.

There are other interesting features on the grounds, including several reconstructed turrets – but due to my limited time I decided to give them a pass for the moment. (As always, they’ll give me a great excuse to return one day.) Nonetheless, it was easy enough to spot other remnants of the old castle on my walk across the park, which was a very pleasant setting indeed for this historic landmark. 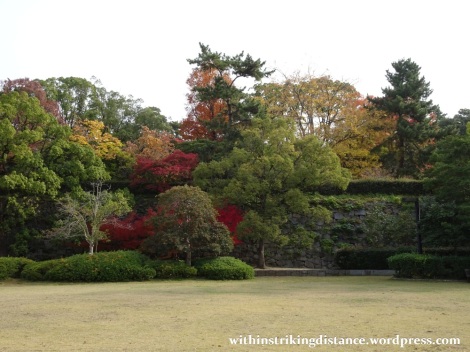 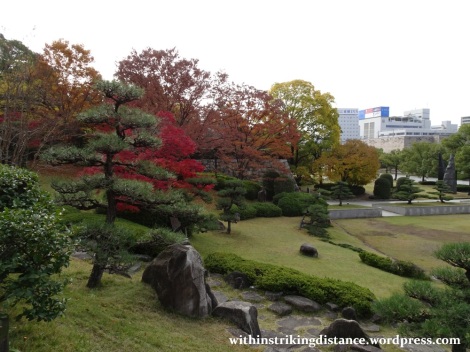 Nestled within the leafy stretch of flat ground west of the ninomaru enceinte are two major museums: one dedicated to art, the other to history.

With my time limited, and in no real mood for art at that particular moment, I merely passed by the Fukuyama Museum of Art (ふくやま美術館, Fukuyama Bijutsukan)… 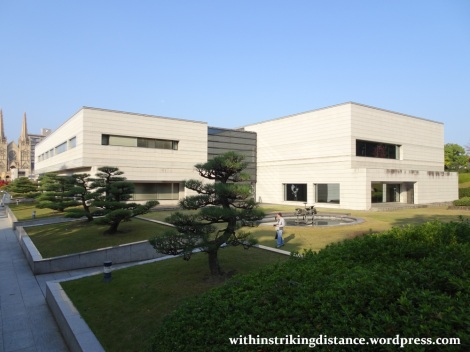 …as I walked briskly towards the stone-clad building that houses my target: the Hiroshima Prefectural Museum of History (広島県立歴史博物館, Hiroshima Kenritsu Rekishi Hakubutsukan). 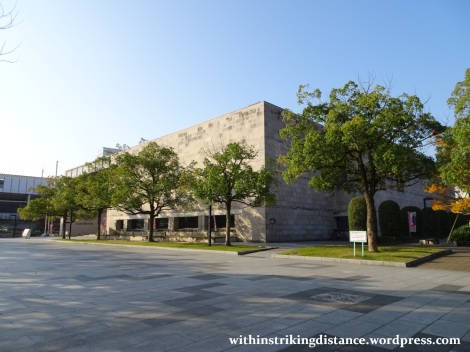 The museum was still closed when I got there, so I whiled away a few minutes by going for a stroll in the lawn right across it. The leaves were only about halfway through their annual autumn colour change, but I must admit that the layered hues of green at the bottom, yellow in the middle, and red on top was itself rather interesting.

All right, nine o’clock – opening time! Back to the museum, through the front door, 290 yen at the reception desk for an entry ticket. 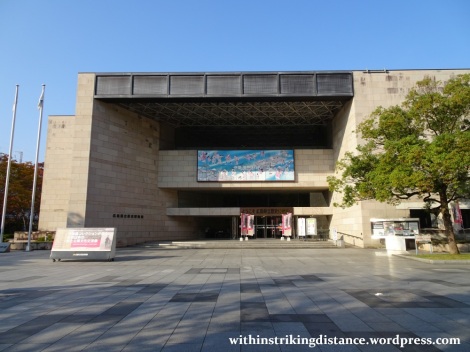 In addition to various temporary exhibits (the one at the time of my visit was a rather excellent event featuring historic maps), the museum has a gallery of permanent exhibits focused on the Setouchi region, which is comprised of those parts of Honshū and Shikoku that border the Seto Inland Sea. There’s a special emphasis on the long-lost settlement of Kusado Sengen, a port town that flourished for about three centuries during the Kamakura and Muromachi periods (roughly spanning the 13th to the 16th centuries A.D.), the remains of which were excavated from the early 1960s onwards. Indeed, the museum’s centrepiece is a life-sized recreation of a small part of Kusado Sengen itself, complete with a street that one can walk upon and houses that can be entered. 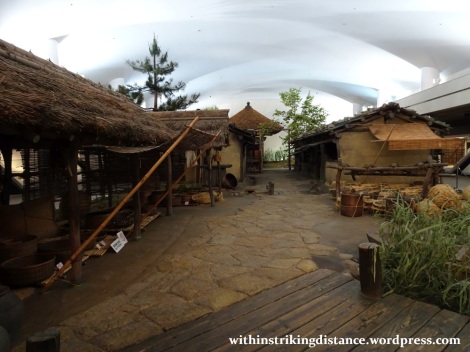 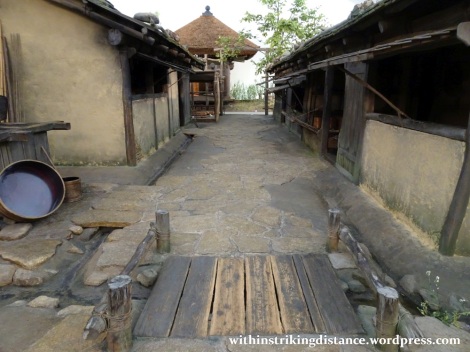 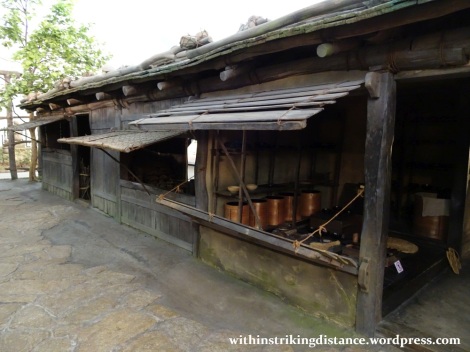 Now that was a rewarding side trip, one that I’d love to do again the next time I’m in Hiroshima. (Not least because I’ve still got Tomonoura in my sights.)