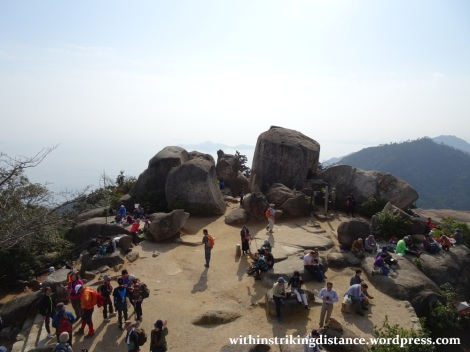 For some, it’s the journey; for others, it’s the destination. And for those of us who choose to stand in the blissful middle, there’s the phenomenal satisfaction of enjoying the complete experience, from the roots of the mountain to its peak and back.

This is the second of two posts documenting my November 2016 visit to Miyajima. Click here to read the first post, which covers some of the attractions that can be visited in or near the island’s main settlement.

Let’s face facts: I’m not much of a hiker. As one who isn’t really as fit as he should be, scaling a mountain wouldn’t ordinarily rank high amongst my list of priorities – not if I don’t want to drop dead by the trailside from exhaustion, that is. But where there’s a will, there’s a way. And when I found myself on the island of Miyajima (宮島) one beautiful morning last autumn, my will directed my steps towards the summit of the island’s tallest peak … there, I hoped, to enjoy the fantastic and far-reaching views that are only possible from a lofty perch on a bright fall day.

As for the way, let’s save that for a few paragraphs down.

Reaching 1,755 feet towards the heavens, Mount Misen (弥山, Misen) has been the steady and silent guardian of Miyajima – or Itsukushima (厳島), if you’d prefer to use the official name – long before we petty humans began settling and building upon this island in the Seto Inland Sea, less than an hour from Hiroshima. Long eclipsed in fame and prominence by the centuries-old shrine at its base, Misen nonetheless remains a popular destination for anyone willing to invest a little extra time and a little extra effort on the walk up its slopes.

And the reward, particularly at this time of year, far outweighs the initial investment.

There are several trails of varying length and difficulty that can take you up to the summit. I set out for the head of the so-called Momijidani Trail, the shortest but supposedly also the steepest, which could take a couple of hours to complete from end to end. Now I wouldn’t normally have chosen the steepest (and possibly most exhausting) route out of any menu of options, but there were two things that made this trail particularly attractive.

We’ll see what those are in a moment. First, we need to get there.

I ventured out into the town’s backstreets, heading south-west from the island’s iconic Itsukushima Shrine. After a while, the buildings on either side of me…

…gradually yielded to nature, giving way to trees and shrubbery along a gravel-strewn path leading deep into the forest.

Soon, the green and dull brown shades of the lower reaches themselves surrendered to a veritable riot of colour: fiery orange and radiant yellow, and every conceivable shade of red.

“Momijidani” literally means “Maple Valley”, and indeed I was standing in the midst of the countless such trees thronging the slopes of Momijidani Park (紅葉谷公園, Momijidani-kōen). Detach the first two characters from the rest of the name, 紅葉, and one can employ two readings for the same pair of kanji: momiji, referring to the trees themselves…

…and kōyō, in reference to the glorious colours that these trees are adorned with when the heat of summer gives way to the deepening chill of autumn. Here is the first reason why I embarked upon this particular route – to enjoy the seasonal splendour that spreads across this corner of the island during the fall. 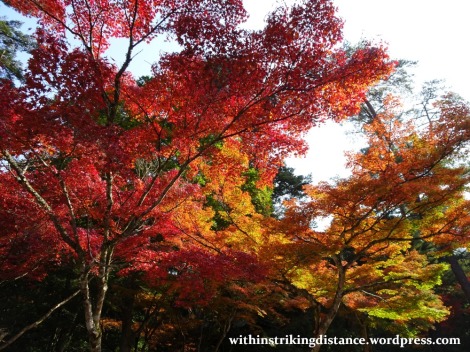 One might also run into some of the local wildlife, like this specimen of Miyajima’s sacred deer crossing the top of a small waterfall. 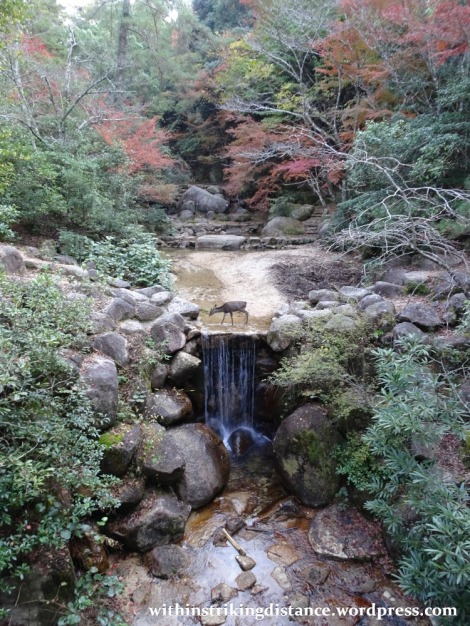 Now then, I’ve shown one reason why I selected the Momijidani Trail as my means of getting to the summit of Misen, but what of the second?

Well, here it is.

Observe the grey slash angling its way from the foothills in the north to near the summit in the south. That is the Miyajima Ropeway (宮島ロープウエー), a cable car that sweeps visitors up from Momijidani Park and deposits them at a spot within less than an hour’s walk of the mountaintop. With this man-made addition to the landscape, the Momijidani Trail is altered from a challenging hike to perhaps the easiest of the routes snaking across the slopes of Misen.

A cheat, perhaps? Hardly. Granted, this means that users have practically skipped almost the entire Momijidani Trail proper, except for a small sliver near the end goal … but it’s worth bearing in mind that not everyone has the time, or the energy, or even the sheer physical prowess required to tackle a roughly two-hour-long mountain walk. (That includes me, and I’ve stated this fact plainly near the start of this post.) For those who have all these things in spades, the old-fashioned trails are all ready and waiting, and will doubtless offer incredible rewards in terms of natural beauty and invigorating exercise.

But the rest of us can be thankful for the ropeway’s little “cheat”. Ha ha ha.

Now do bear in mind that the cable car will take you near the top, but not all the way there. And the remaining ground to the summit, whilst not likely to be a life-threatening struggle to anyone with normal health and mobility (and probably no more than an easy-peasy hop-and-skip for experienced hikers), is still a fairly exhausting journey. Roughly half an hour on paper, but I’d allow more than that depending on one’s preferred pace, how often/long one stops to rest, and how leisurely one desires to take in the various vistas and attractions along the route.

Here’s a shot taken not far from the upper ropeway station. If you click on the picture and view a larger version of the same, you might just barely make out a flat-topped structure at the centre, a little above the white rock face in the middle of the forest-covered mountain. That’s the rest house at the summit of Misen, and the target of my expedition. 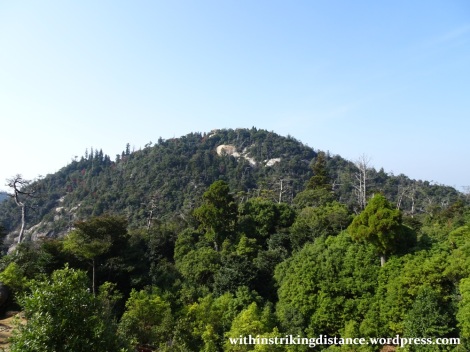 All right, enough chit-chat. Stock up on hydration at the vending machines if needed, make sure those shoes are securely laced up, and head out. 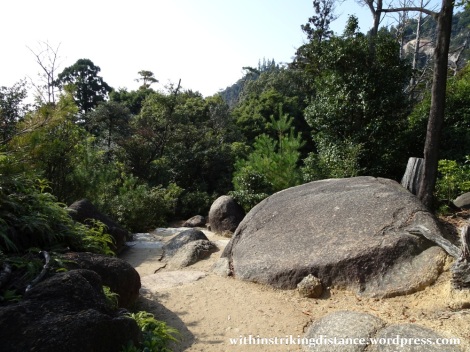 To keep this already lengthy post from growing much longer, I’ll refrain from commenting in detail on some of the views and interesting rock formations that line the trail. There are descriptions available on the Miyajima Ropeway’s official site, where you can also view a simplified map showing the recommended round-trip course from the station to the top and back down. Due to various circumstances and exigencies, I ended up completing just half of the prescribed route, going up and down via the same path rather than ascending by one way and descending by the other. This means that I missed out on some of the interesting features of the other half of the mountain hike, but no worries: as always, I can simply add them to the long list of reasons to return one day.

Somewhere around the halfway point, I emerged onto a small clearing surrounded by temple buildings. And more importantly, benches. Yes, by this time I was practically worn out and on the verge of surrendering the struggle altogether, but a few moments of seated rest and a few gulps of water and I was ready for the final push to the summit.

Before that, let’s have a look around. 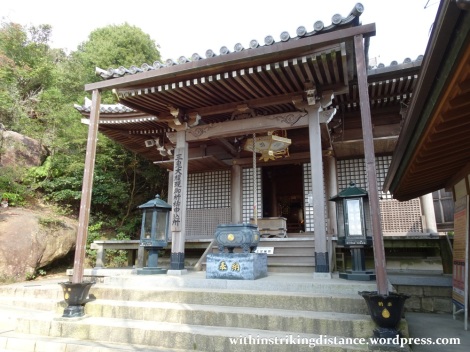 Chill dudes. Chill. We ain’t goin’ anywhere. (Well, mainly on account of the fact that we’re made of stone, but there you are.) 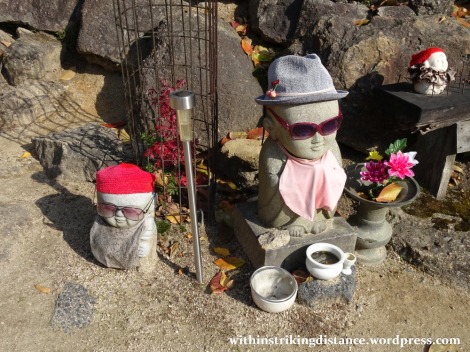 Those chaps might not be in a hurry to move, but I certainly was. Back onto the trail now, admiring the interesting rock formations en route on the final quarter hour or so before the summit. 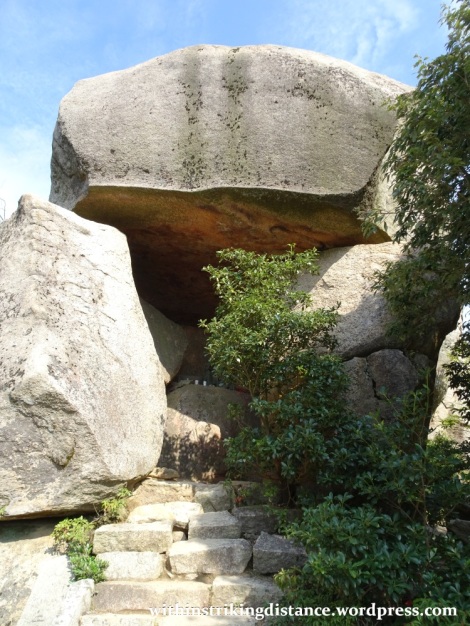 As I approached the top of Misen, the forest began to fall away and I could see more of the landscape. Less earth now, and more rocks to clamber over.

And at long last, after all that effort and exhaustion, I planted my feet upon the highest point on Misen – 535 metres above sea level – and laid claim to my symbolic prize.

Well, the highest geographic point perhaps, not counting the boulders and so forth. The highest physical point would probably be the upper floor of the rest house, which offered a great view of the summit area at its base.

Of course, the best views are those of the landscape around the mountain, across the Seto Inland Sea and beyond. 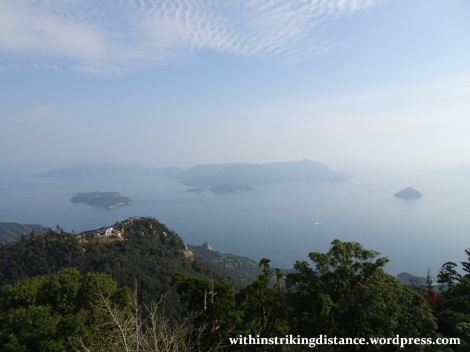 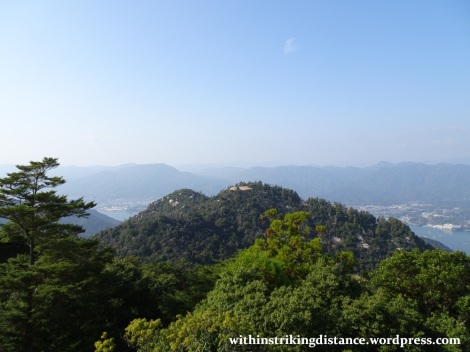 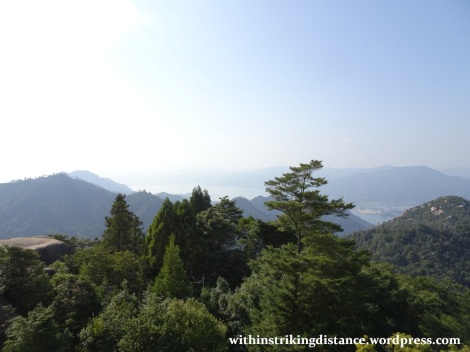 Gorgeous. Utterly breathtaking. Made me wish I’d brought up a sizeable packed lunch and enjoyed a leisurely meal up here.

But as with most good things, my time on the summit of Misen came to an end. Back onto the trail now for the long journey down to the ropeway station. 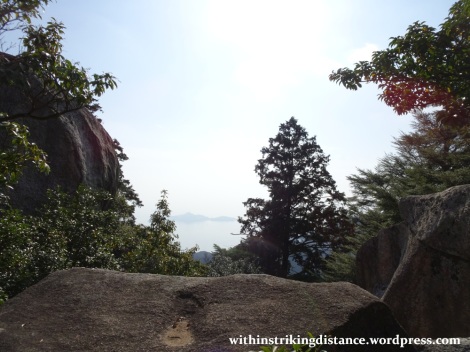 Ah, but we’re not done with the views … not yet. A short walk from the ropeway station is the Shishiiwa Observatory, which despite being lower down than the summit, is still lofty enough – 430 metres above sea level – to offer a fantastic vista. For those who can’t make it all the way to the top, it’s not such a bad alternative. 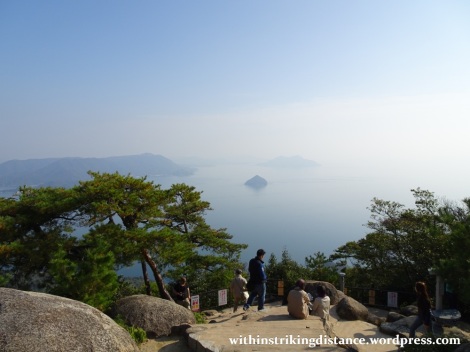 Behind the observatory is the summit I’d just descended from, and a full zoom allowed me a close glimpse at the rest house where I savoured my triumph. 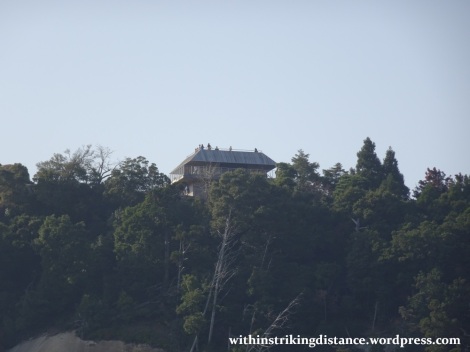 And from here, I returned by way of the cable car to the town at the foot of the mountain, there to enjoy more of Miyajima’s historic and architectural treasures before the ferry brought me back onto the mainland.