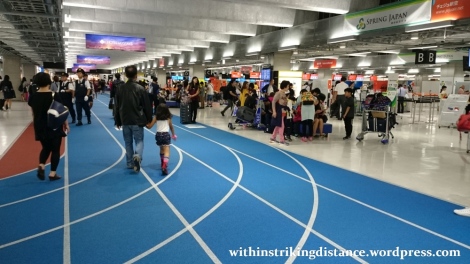 I write about flights and interesting rail journeys from time to time, but I don’t normally give airports or ordinary train commutes the same treatment. As a postscript to the series documenting my October 2016 weekend holiday in Tōkyō, let’s make an exception and take a quick look at the terminal I flew home from – as well as the train that brought me there.

The launchpad for my journey back home was Keisei-Ueno Station, in the northern part of central Tōkyō. 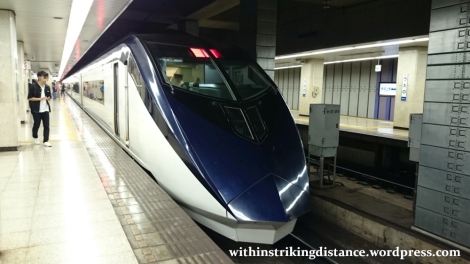 I’ve only used the Skyliner a few times when flying into or out of Tōkyō via NRT, mainly because the areas where I usually stay in the city are more conveniently reached via JR East’s rival Narita Express service. But the Skyliner dovetailed with my travel plans on that particular trip, so Keisei wins this round.

Since I didn’t take many pictures on my inbound trip from NRT to Tōkyō, let’s have a look at just the return leg.

Boring background blather over. Now back to that gorgeous train.

The second-generation Keisei AE Series EMUs used on Skyliner runs were manufactured in 2009 and 2010 by both Nippon Sharyō and Tōkyū Sharyō. This particular unit is set number AE3, built by Nippon Sharyō and delivered on 26 March 2010.

Designed by Yamamoto Kansai, the train is quite a looker both inside and out – very simple aesthetic, yet extraordinarily refined. There’s only one class of service available (unlike on the Narita Express), but on a fairly short ride of less than an hour’s duration, it doesn’t take very much to make things comfortable. 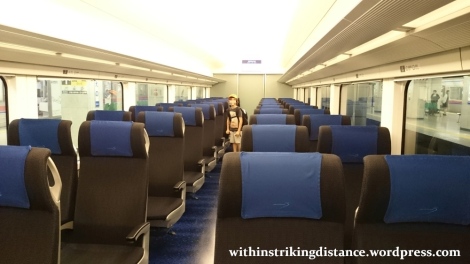 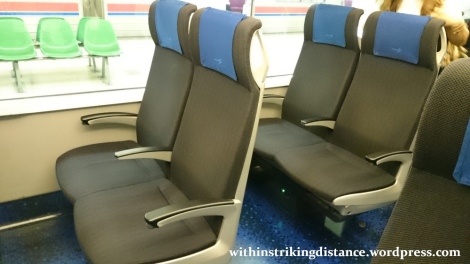 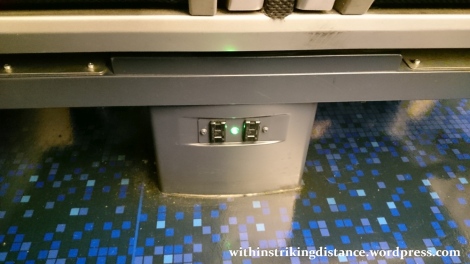 Now then, time for a snack and my customary afternoon coffee. There’s no cart service on board, so buy your provisions beforehand at the station. 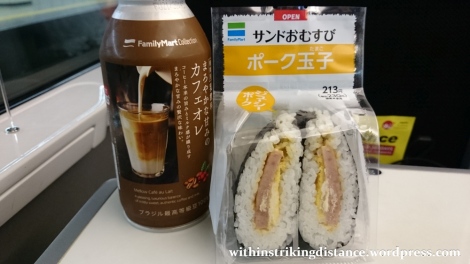 Here’s the route. As always, bear in mind that Google’s auto-generated map might change depending on when and where you’re viewing it, so treat the track plotted below as purely indicative. Think more of the distance and direction between the two points rather than the shape of the path traced here.

The Skyliner serves two stations at the sprawling NRT complex: one underneath Terminal 1, the other at Terminal 2. The latter also happens to be the closest mass-transit point to NRT’s latest addition, Terminal 3, which does not have a station of its own.

This lack of a dedicated railway stop is just one of the many characteristics that highlight T3’s role as a facility for low-cost carriers. Opened in 2015, the new terminal was built to operate cheaply for cheap airlines catering to cheapskates – and I say that non-pejoratively, being something of a cheapskate myself – with no train station, no aerobridges, no travelators … bare bones all around.

Speaking of travelators, their absence becomes uncomfortably palpable almost from the moment one ascends to ground level from the T2 train station and encounters the start of the long pedestrian corridor leading to T3. 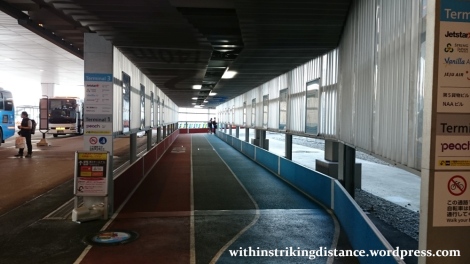 There’s an easy way to avoid the roughly quarter-hour walk: take the free bus that shuttles passengers between T2 and T3 every 3-7 minutes (depending on the time of day). More details – including timetables and stopping points – are available on NRT’s official website.

As for myself … well, I did feast on rāmen earlier that same day so hoofing it seemed like a good opportunity to burn off the unwanted calories.

The walkway is designed to look like a racetrack, but the resemblance is more than superficial. In fact, the entire stretch is paved with a springy, shock-absorbing material reminiscent of what one might find on actual running courses, which helps make the hike a bit more comfortable. 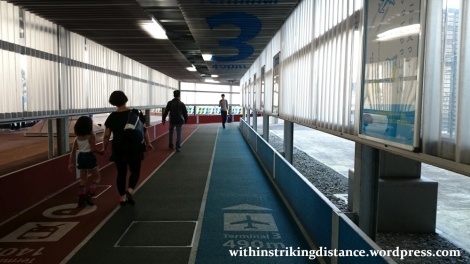 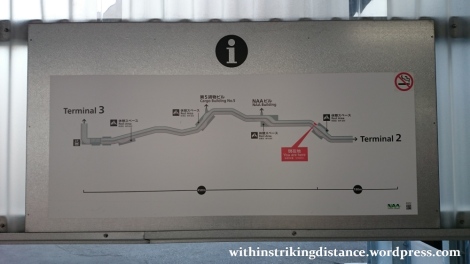 There are no less than four rest areas strung along the course, equipped with such conveniences as segregated dustbins and AEDs.

That’s right, AEDs. Probably to help shock some life back into pedestrians who might’ve passed out from the lengthy slog. 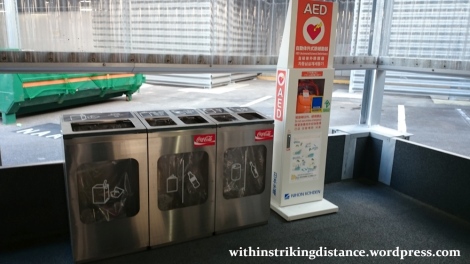 After the gruelling walk of over half a kilometre, some blessed relief: the entrance to T3 finally comes into view. 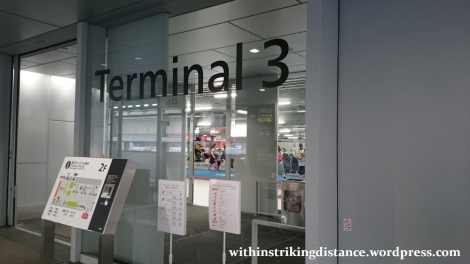 The LCC focus of this new facility is apparent from the moment one walks into the check-in lobby. (Well, I suppose it’s apparent from the moment one begins that painful marathon to get here in the first place, but there you are.) Rather than the soaring ceilings and colossal architecture that are the mark of international gateways the world over, here the look is less that of Monument-for-the-Ages and more of Bargain-Basement-Supermarket. Unpainted concrete, exposed pipes and ventilation ducts … you get the idea. 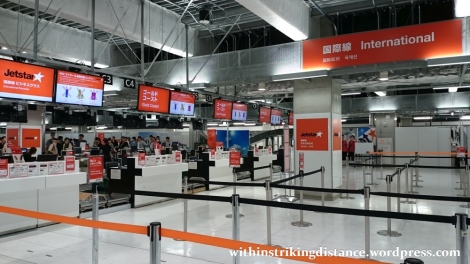 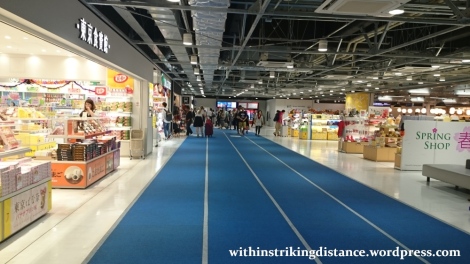 A criticism? Hardly. In fact, I rather like it. And considering that I’d paid quite affordable LCC fares to go on this trip, I’m quite content to get what I paid for.

All the essential facilities are available. Shops you’ve seen in one of the pictures above, and add to that a sprawling food court… 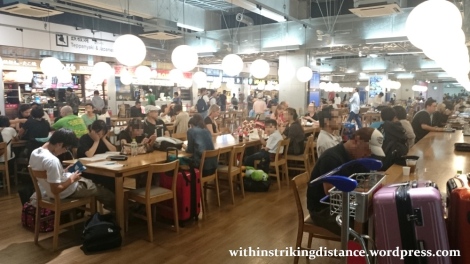 …as well as a place where one can book train and bus tickets. Even if one can’t actually catch the train here, at least it’s possible to do the work in advance and save time that would have been spent queuing up at the potentially busier counters in neighbouring T2. 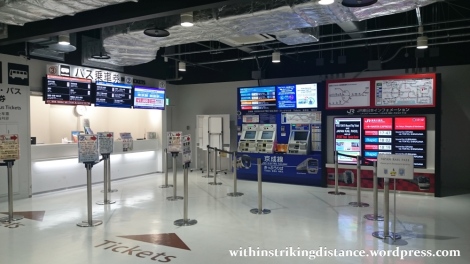 Right, then: time to head for the gates. Given the choice, I’d have turned left (and continued to enjoy my favourite holiday destination in the world), but there was this insignificant, trifling, inconsequential little bother called “work” that I had to get back to.

So the right-hand passage it had to be. Reluctantly, of course. 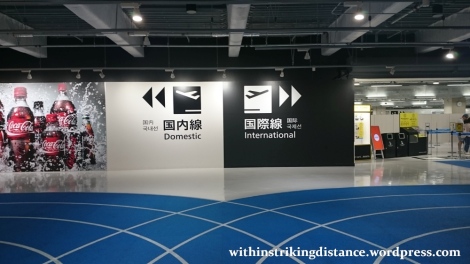 More shops were available after security and immigration. Needless to say, airport designers are always keen to think of ways to convince passengers to part with their money. 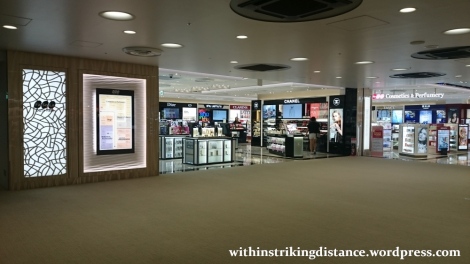 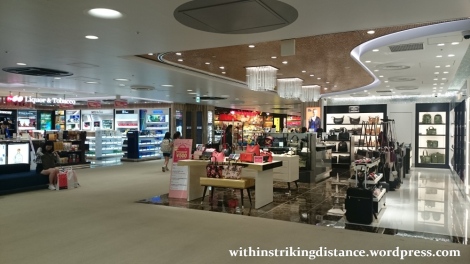 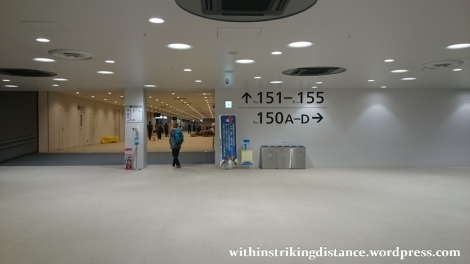 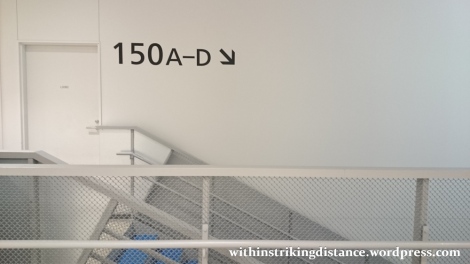 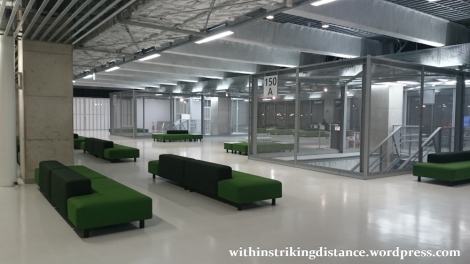 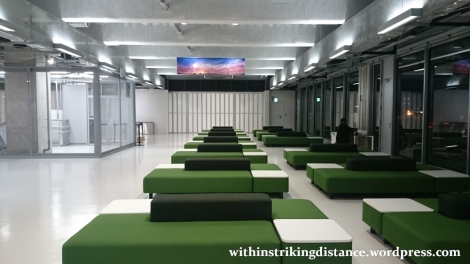 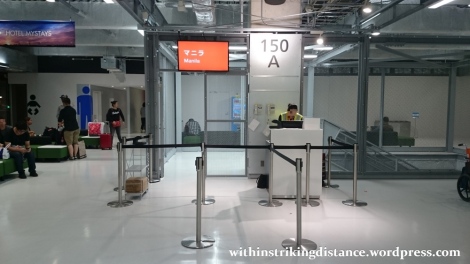 Snide remarks aside, my overall experience was quite positive, and I’d happily fly through T3 again if given the chance. Then again, despite being a regular visitor to Japan as a whole and to Tōkyō in particular, I probably won’t get that chance as often as one might think. Amongst the carriers with direct flights between Manila and Tōkyō, only Jetstar currently employs T3 – the rest park at T1 or T2 (or use the capital’s other gateway, Haneda Airport).