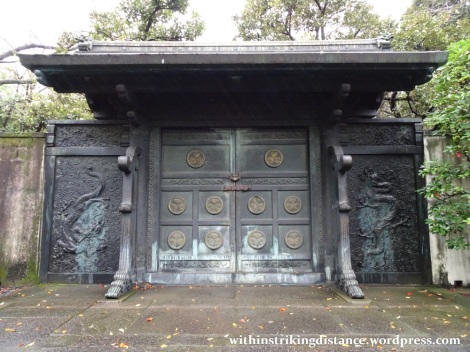 As a rigidly conservative Catholic, I’m not drawn to Japanese temples for spiritual reasons, but I occasionally poke around them out of an interest in architecture and history. In the case of Tōkyō’s Zōjō-ji, there wasn’t much left to admire in terms of original architecture – most of the compound having burned down during the Second World War – but there was a very significant piece of history on show: namely, the graves of several Tokugawa shōguns and their consorts.

My flight from Manila arrived at Narita International Airport around 1100 that morning, and by the time I’d run the usual gauntlet – immigration, baggage, customs, voucher exchange for Japan Rail Pass, book tickets for the first few rail journeys, train ride to downtown Tōkyō, check-in and dump baggage at the hotel – it was early afternoon. What’s more, the day was heavily overcast (and occasionally rainy), which meant that conditions weren’t exactly ideal for sightseeing.

No matter; I had just one place in mind for today, anyway.

Although its origins as an institution stretch as far back as the late 14th century AD, Zōjō-ji (増上寺) has only occupied its present site since 1598, when it was rebuilt there on the orders of Tokugawa Ieyasu. It became the Tokugawa family temple in their capital of Edo, eventually sharing the honour with Kan’ei-ji in the Ueno area (which I visited on a previous trip). Much of the vast compound was destroyed during the Second World War, with the enormous Sangedatsu-mon (三解脱門) gateway – dating from 1622 – one of the last remaining vestiges of its former glory.

Once through the gate, I spotted the temple’s main hall in the distance. Completed in 1974, it’s a pretty drab and soulless piece of architecture, made interesting only by the gigantic photobomber standing in the background. 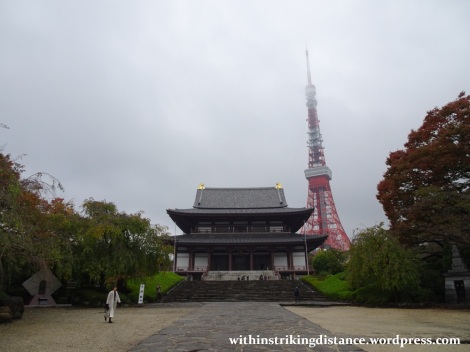 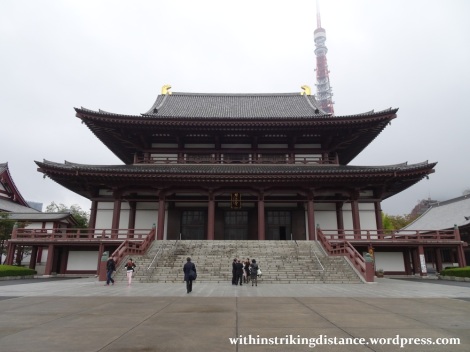 There’s a small basement gallery that contains some important artworks owned by the temple, including a detailed scale model of one of the halls associated with the grand shōgunal mausoleums that once stood on the grounds.

When Kan’ei-ji assumed the role of Tokugawa family temple alongside Zōjō-ji, it wasn’t just honour or precedence that the two temples had to divide between them. They began to share the Tokugawas themselves – the dead ones anyway. Of the fifteen shōguns who ruled during the Edo Period, six were buried at Zōjō-ji and six at Kan’ei-ji. I’d already visited (or at least got fairly close to) the Tokugawa graves at Kan’ei-ji, and now I was eager to see the rest.

On my way to the cemetery at the back of Zōjō-ji, I caught sight of numerous jizō statues lining the path in neat rows. Many were traditionally garbed in red caps and bibs… 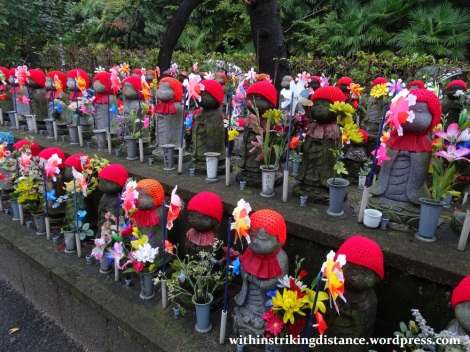 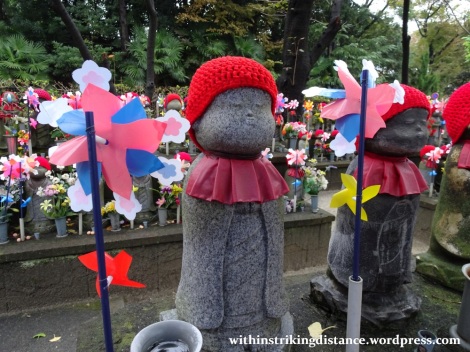 …whereas others – well, let’s just say that local devotees won’t be outdone easily when it comes to creativity. 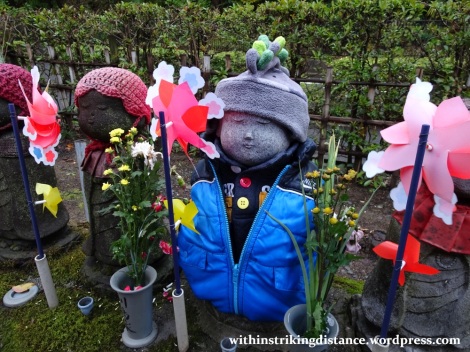 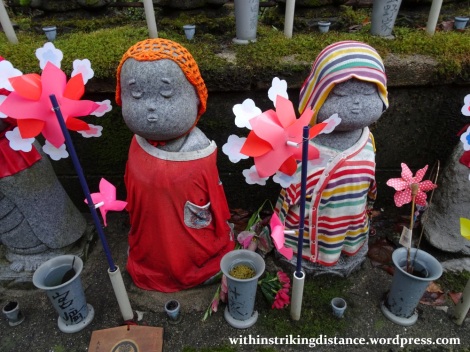 If I had come to visit the Tokugawa mausoleums before the Second World War, I would have seen not one, but several great enclosures, each equipped with lavishly decorated gateways, memorial halls, and scores of votive monuments. Here’s a small sampling of old photographs to give readers some idea of what once stood here. 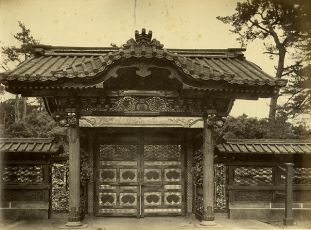 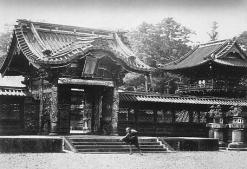 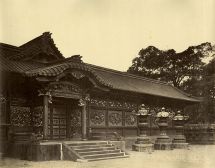 All this splendour, this glory, this peerless beauty … gone. Reduced to ashes and lost for all time. The firebombs that rained down upon Tōkyō in 1945 almost completely obliterated the grand mausoleums, along with much of the temple itself. Instead of embarking upon an ambitious – and perhaps financially ruinous – reconstruction, the local authorities decided to give over most of the former shōgunal cemetery to modern redevelopment.

A map posted on the grounds shows an outline of Zōjō-ji and the adjoining tomb complexes as they existed before the war. Note how two large hotel buildings – marked by the shaded pink areas – now stand directly on top of the old graves. 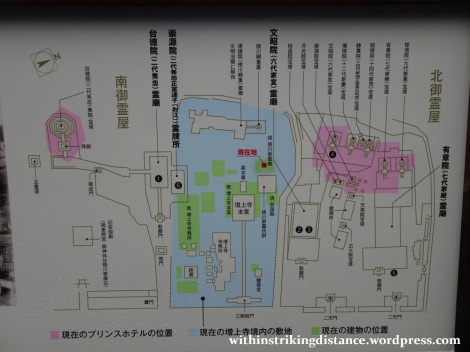 As for the remains of the shōguns and their consorts, they were dug up and reburied within a small enclosure just behind the main hall. 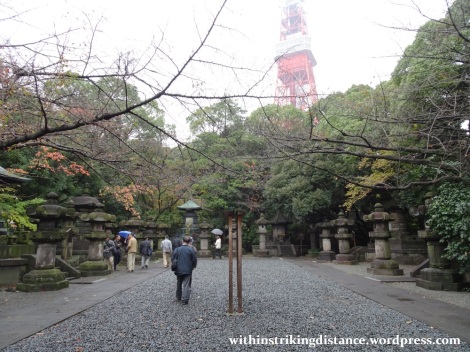 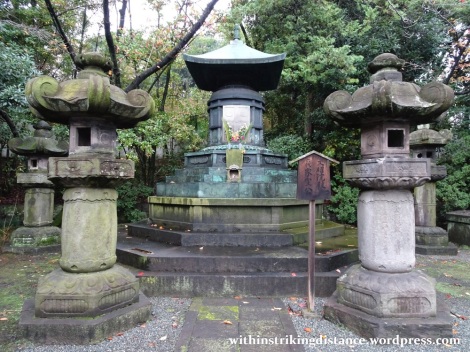 One other remnant of the former tombs can be found just south of Zōjō-ji, a short walk from the main entrance. This large red gateway was one of several that formed part of the Taitokuin-reibyō, a huge mausoleum built to house the grave of the second Tokugawa shōgun, Hidetada (1579-1632). 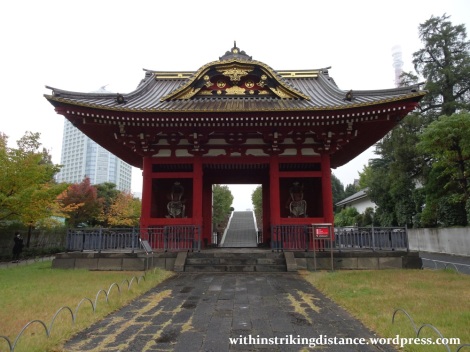 In the next post, we’re off to faraway Kyōto in search of autumn colours – as well as to visit Japan’s newest major railway museum.