The grand old palace of Changdeokgung, like the city of Seoul itself, might be likened to an old friend. Having conversed with them a couple of times, and having eased into a comfortable familiarity, one begins to think that there are no more secrets between the two of you … until they spring a massive surprise and reveal a side of themselves that is as breathtaking as it is unexpected.

My fourth visit to Seoul began with a late afternoon trek to the front gate of this centuries-old seat of royal power. I’ve been here twice before: once in winter (here and here), the other time in early autumn (here). The same palace, but as different in both seasons as a person would look after trading one set of garments for another.

Today, I was going to meet Changdeokgung after it dons the dark pall of night, overlaid with a delicate silver veil of moonlight and ornamented with the glow of countless lamps.

Like Seoul’s other royal palaces, Changdeokgung normally shuts its gates by sunset, but on select days from spring to autumn – coinciding with those brief windows when the moon is full or nearly so – the portals are thrown wide open for special night-time viewings. With the limited dates available, it’s no surprise that admission to the so-called Moonlight Tour at Changdeokgung Palace can be quite hard to obtain. Fortunately, the Korea Tourism Organization ran a special programme where a limited number of foreign visitors could apply to join the tour free of charge, and after submitting an application I was fortunate enough to receive an invitation.

So take this piece of advice from your friendly neighbourhood blogger: pay regular visits to the KTO website. It’s a great resource for planning a trip to Korea, and it certainly pays to be kept apprised of campaigns like the one I successfully applied for.

Now then, back to the evening at hand. I arrived at 5:30 or thereabouts, by which time the palace’s main gate was already shut (admission ends an hour before closing) and the last daytime visitors were slowly emptying out through a side doorway. With the area unusually free of the crowds that normally thronged it, I took the opportunity to admire the ornate portal in relative peace.

Sometime after 6, staff members in courtly robes set up a registration centre and began processing visitors who had signed up for the Moonlight Tour. 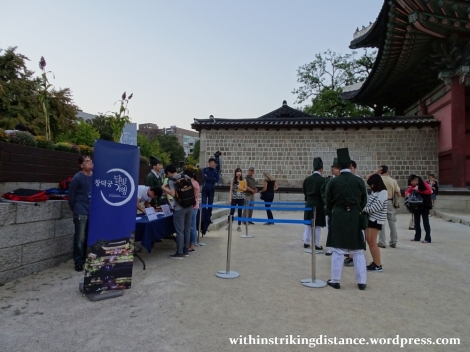 After signing the log sheet, I was issued a small radio device that would allow me to pick up the guide’s live commentary during the walk through the palace grounds.

Just before 6:30, a guardsman in richly decorated Joseon-era garb emerged from the gate and blew a strong note on a conch, signalling the start of the evening guard posting ceremony.

We were given an opportunity to take pictures of, and with, the sentries, which lasted until the sun had gone down and the skies were sufficiently dark. Next, we were organised into half a dozen queues, each corresponding to the group number that was assigned to every visitor upon registration. I was in Group 1, and we were the very first to march into the darkened palace grounds when the tour began.

As we passed through the gate, staff members gave out hand-held lanterns with blue and red shades. Not every person received one – just enough in each group to provide sufficient illumination during the night-time stroll. 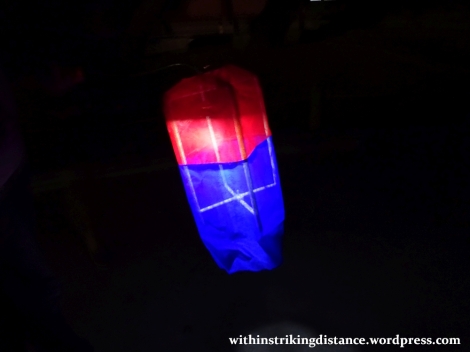 Supplying a detailed English commentary as we went, the guide gently shepherded us across the vast palace grounds, which in the cover of darkness looked very different indeed from how I remembered them. Much of the course was not illuminated, save for the hand lanterns and the light from the nearly-full moon shining overhead. Some parts, however, were brightly aglow, including the Injeongmun gate and the colonnade surrounding Changdeokgung’s main structure, the stately Injeongjeon throne hall. 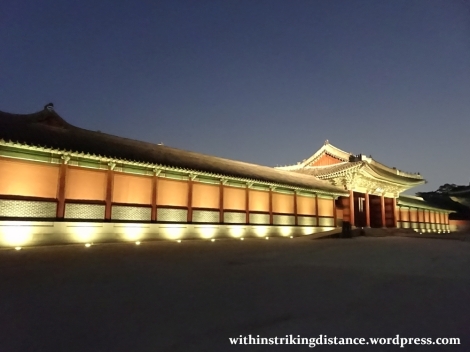 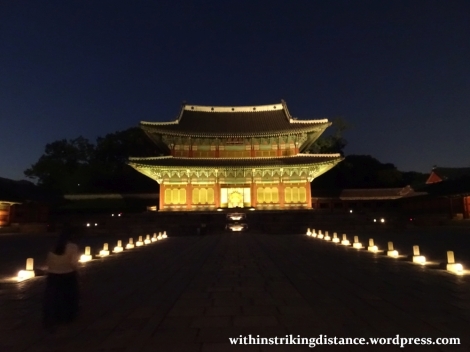 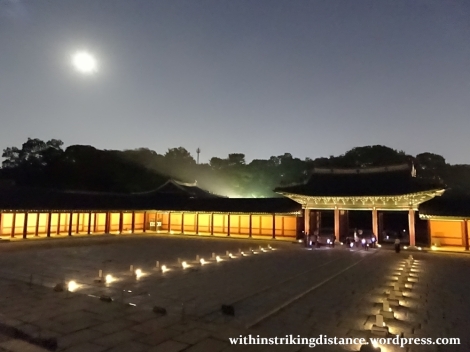 This, however, was the exception and not the rule. As the guide explained earlier on, these tours were possible only when the moon was full, precisely because it’s only on such occasions that there would be enough natural light for visitors to make their way through the palace. Don’t be fooled by the relative brightness of the scenes shown below, which is the result of automated adjustments made by the camera – it really was quite dark all around. 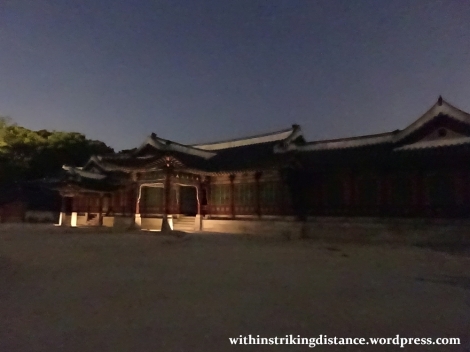 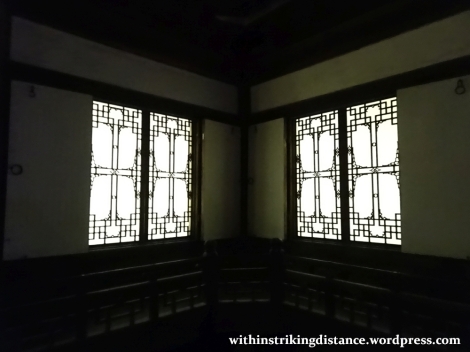 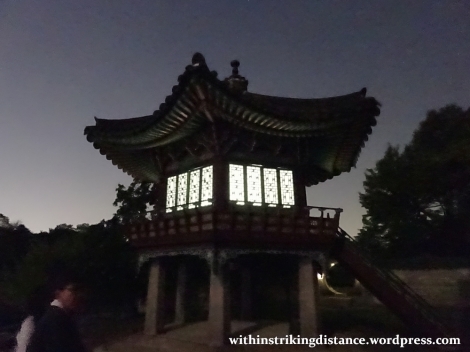 The experience was a little surreal, with many buildings reduced to mere outlines or dimly lit shapes enveloped by a black veil, though this also helped other details stand out more than they would in broad daylight – the varied patterns of the window shades, for example.

In due course, we entered the confines of the so-called Secret Garden and made our way towards the brightly illuminated Juhamnu pavilion.

Compare this scene with how it would look during the day. I think you’ll agree that it would be well worth seeing this pavilion, this garden, and indeed this entire palace both before and after sunset.

The Yeonghwadang pavilion nearby was also festively lit, and from one of its open doors came the sweet sound of music, courtesy of a woman playing a traditional stringed instrument. 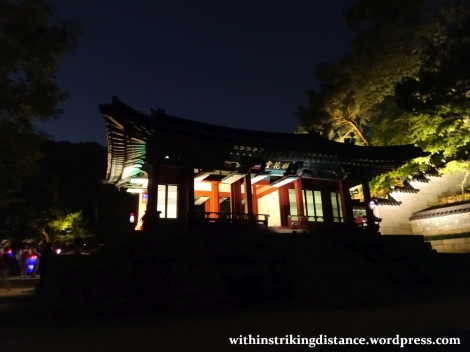 Further on, after passing other points of interest, we arrived at the Yeongyeongdang compound, part of which had been temporarily transformed into an open-air concert venue with benches and cushions. 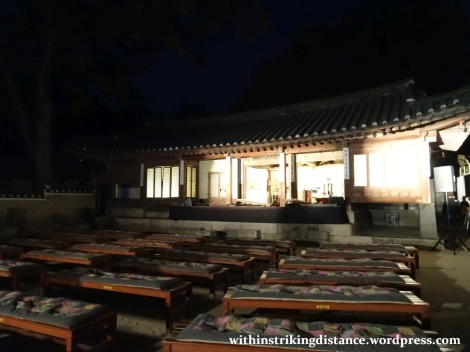 …which featured a rich and refined selection of traditional music, dance, and storytelling. What a splendid way to conclude the tour. 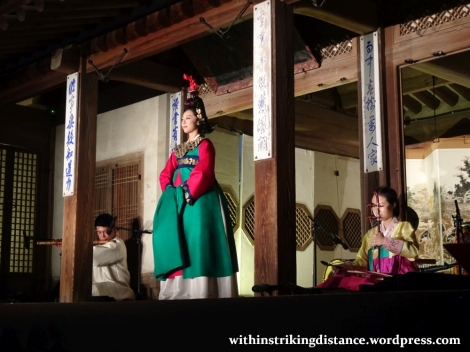 Here’s a sample of the performances we enjoyed that night.

And so ended our splendid night-time experience. We turned in our portable audio devices and marched back to the main gate, where a final surprise awaited us.

As we passed through the gate, staff members gave each guest a small parting gift: a box containing metal bookmarks patterned after the lovely windows of Changdeokgung’s Nakseonjae compound, which we’d seen lit from behind earlier that evening. 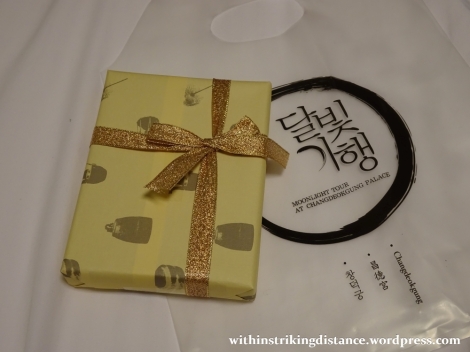 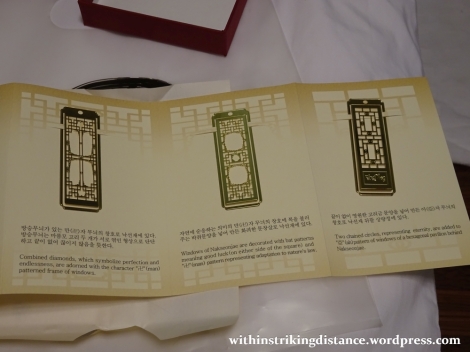 The Moonlight Tour at Changdeokgung Palace was a genuinely memorable experience, and one that I hope to relive in the future (perhaps with friends and family in tow). I have no doubt that the next time I pay a visit, even this old friend of mine will have other surprises still waiting to be revealed.