As the largest of Seoul’s five royal palaces, it’s no wonder that Gyeongbokgung was once equipped with kitchens that could feed an army. Newly restored a century after its destruction, this former nerve centre of Joseon court cuisine invites visitors to imagine what it must have been like – and how difficult it must have been – to prepare and serve the lavish banquets that the king and his retinue demanded.

But before we start poking our fingers into the king’s breakfast porridge, let’s head off to church. It is Sunday, after all.

A short subway ride from Seoul Station brought me to the Myeongdong district. Although probably best known for its rather severe infestation of cosmetic stores, nothing dominates the area – architecturally, historically, or spiritually speaking – quite so much as the city’s soaring Roman Catholic cathedral, where I attended the 7 AM Mass. 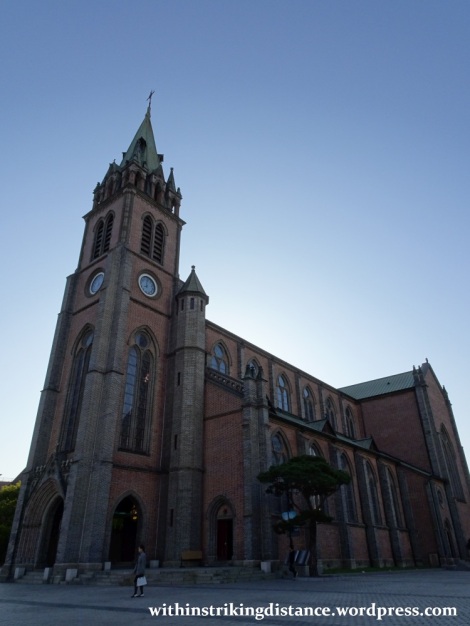 I then repaired to my hotel for a quick breakfast, followed by another metro ride to the sprawling palace grounds of Gyeongbokgung.

I’ve been to this vast royal compound a couple of times before, so I didn’t linger to admire the major structures that tend to draw in the heaviest crowds. (You can find more pictures of those parts in my previous posts about the palace.) After watching one of the hourly Changing of the Guard ceremonies…

…I swept rather quickly through the centre of Gyeongbokgung, snapping just a few token photos along the way…

…and headed east towards the buildings of the Sojubang kitchen area, where meals were once prepared for the Joseon king and his court. Originally dating from the late 14th century, the Sojubang – along with the rest of the palace – was destroyed during the Imjin Waeran of 1592-1593 and lay in ruins until Gyeongbokgung was rebuilt in 1867. Just a few decades later, after the annexation of Korea by Japan, the royal kitchens were torn down by the colonial government in order to make room for the 1915 Joseon Production Promotion Exhibition.

In 2011, after preparatory archaeological excavations that started in April 2004 were concluded, the Sojubang site was fenced off and work began to painstakingly reconstruct the long-lost structures using traditional techniques and designs. (I remember seeing the temporary enclosure on one of my previous visits to Gyeongbokgung, and from that time on I looked forward to admiring the results.) This massive undertaking was finally completed in 2015, a full century after these buildings were last demolished.

Right then … let’s have a look round.

The Sojubang area consists of three enclosures. I first headed into the Saengmulbang, where dessert courses such as fruit platters, sweets, and beverages were prepared. Note the temptingly realistic recreations of Joseon-era delicacies on display in this kitchen, as well as the other two kitchens of the Sojubang – a nice little touch that lent a spark of life to what would otherwise have been beautiful but hauntingly empty palace halls. 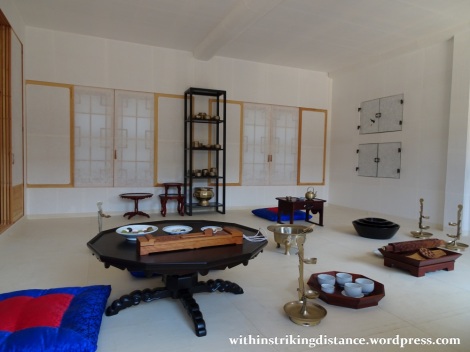 Passing through a side gate, I crossed the narrow lanes separating the buildings of the Sojubang compound… 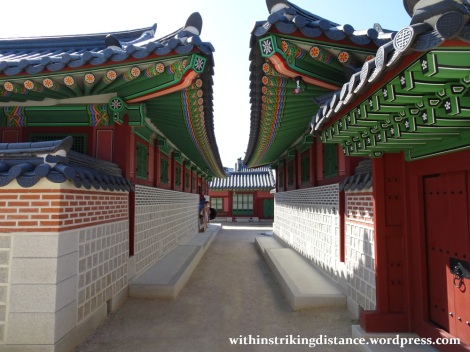 …and entered the Oesojubang. Here, palace servants toiled over the banquets served during major ceremonies such as royal births and weddings.

Finally, I visited the Naesojubang, reserved for the preparation of simpler daily meals – although “simple” is of course a relative term and the food served here probably far exceeded even a commoner’s idea of a lavish feast.

To finish off my tour of Gyeongbokgung, I paid a visit to the National Folk Museum of Korea, located in the north-eastern part of the sprawling palace enclosure.

The museum itself is certainly worth a stopover in any season, with its many exhibits highlighting various regional customs and cultural artefacts – but adding to the experience on this particular day was the fact that the 27th of September fell within this year’s long Chuseok weekend. In keeping with the festive spirit of this major Korean holiday, the museum grounds were packed with stalls and family-friendly activities, ranging from traditional puppet shows to arts and crafts to free servings of sikhye. 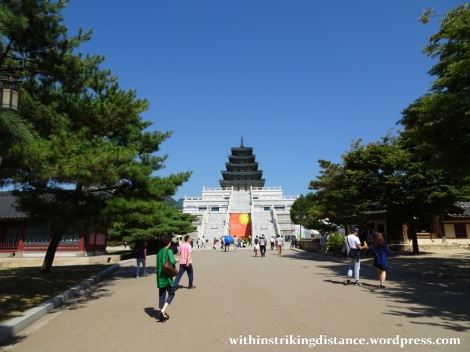 A great start to the day … but I wasn’t done yet!