Our itinerary for the 23rd of November was light, open, and relaxed – it was Sunday, after all. A hearty breakfast to start, followed by mid-morning Mass at a Catholic church in downtown Ōsaka, and then a quick day trip to see the gilded precincts of what may well be the grandest house in all of Kyōto.

The 11:07 Haruka 14 limited express train whisked us from Shin-Ōsaka Station to Kyōto in well under half an hour. A shinkansen service would have traversed the same distance in less time, but that leg wasn’t covered by the Kansai Wide Area Passes we were using.

At Kyōto Station, the city’s subway network – and a last short stretch of walking – brought us to the massive front gate of Nijō Castle. Once the Kyōto headquarters of Japan’s supreme military ruler, the shōgun, this splendid collection of Edo-period buildings is one of 17 sites that constitute an area-wide World Heritage Site.

It was my third time at the castle, so to keep things short and sweet I’ll only show a few highlights from this latest visit. For more pictures and additional commentary, please swing by the posts describing my previous visits here (2009) and here (2013).

The vast fortified compound was protected by two rings of stone-walled moats, the first of which we crossed on our way through the main entrance.

Just inside the outer wall was another barrier, a rather less formidable assemblage of wood and packed earth topped with long stretches of tiled roof – designed, perhaps, with privacy and aesthetics in mind rather than defence. This inner wall was pierced by a magnificent karamon, a prominent architectural feature that had only recently emerged from detailed restoration work. In fact, I had the honour of seeing this gate in 2009, before the project began (note the slight fading in the paintwork and the greenish tinge of patina on the gilded metal fittings)…

…in 2013, with work underway and the gate completely shrouded in scaffolding:

…and finally, on this bright and sunny November day in 2014, with the scaffolding removed and the newly restored gate at last exposed to view. 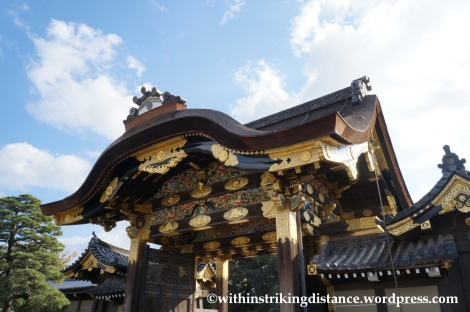 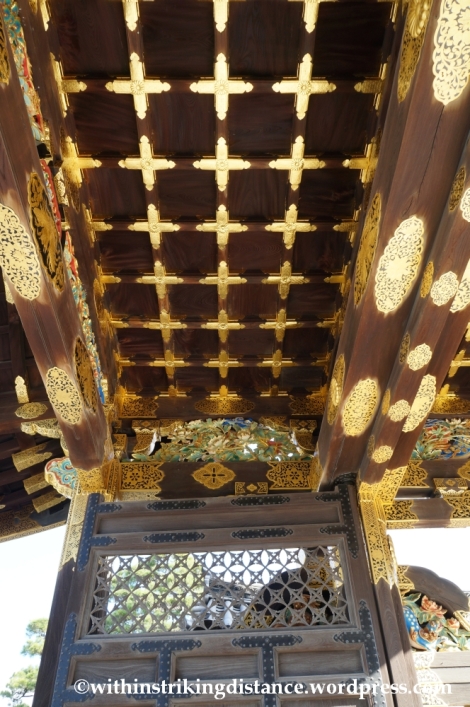 Of course, for all its riotously ornate decoration, the gate was merely a preview (of sorts) for the castle’s vast centrepiece: the sprawling collection of interconnected buildings that forms the Ninomaru Palace. 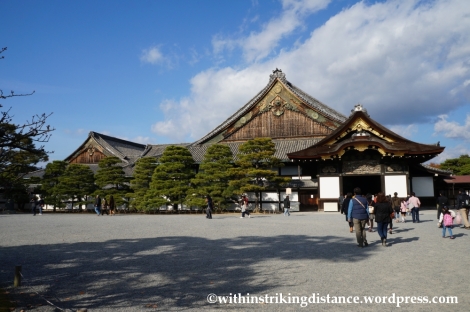 The palace’s lavish rooms were truly a sight to behold, but I won’t say more about them here – the commentary I wrote for my previous visits (2009 and 2013) should suffice. I’ll only mention that photography is strictly forbidden inside so there aren’t any interior pictures to show, either here or in my older posts about the castle.

Right then, moving on. After walking through the palace, we spent some time in the adjoining garden before heading west across the inner moat…

…and stepping into the honmaru, Nijō Castle’s innermost enclosure, the main architectural feature of which is the Honmaru Palace. Half the size of the Ninomaru Palace, and far less lavishly decorated (at least on the outside), it was nonetheless a treat to look at with its aged, unpainted timbers and more homely profile. 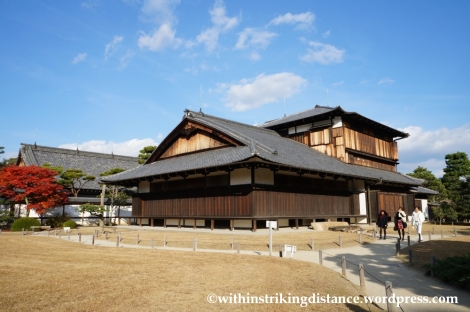 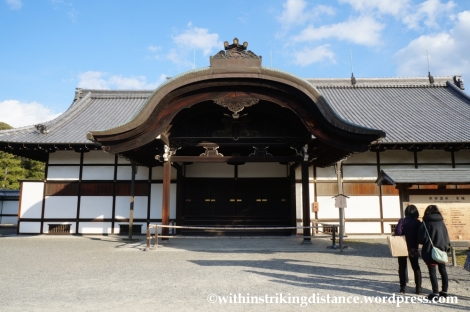 We crossed the inner moat once more, this time on the western side of the honmaru, and from here it was possible to see one corner of the formidable stone base on which the castle’s main tower once stood before being destroyed by fire in the 18th century. It’s actually possible to climb up to the top of the tower base, which now serves as an observation deck – the third page of the blog post describing my 2009 visit has a couple of shots taken from that vantage point – but my parents seemed in no mood to attempt the ascent so I didn’t suggest it on this occasion.

From the western edge of the castle compound, we began our long journey back to the main entrance on the eastern side. Along the way, we enjoyed the sight of autumn colours in the meticulously maintained gardens that filled the space between the inner moat and the outer wall. 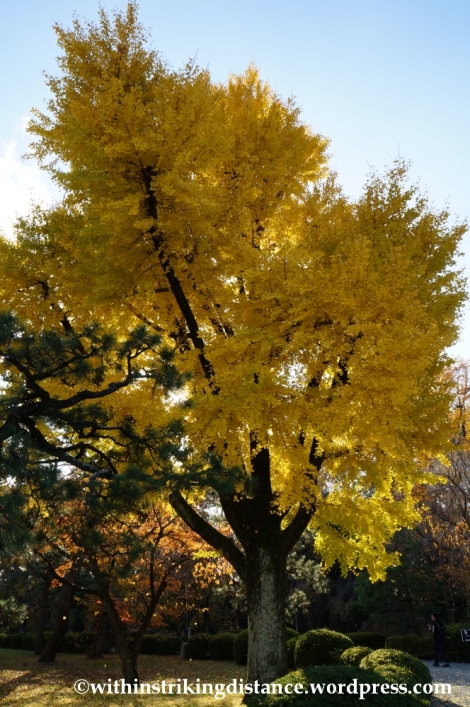 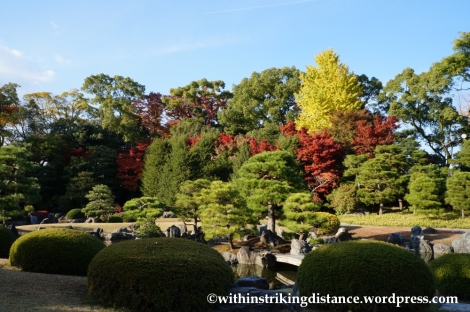 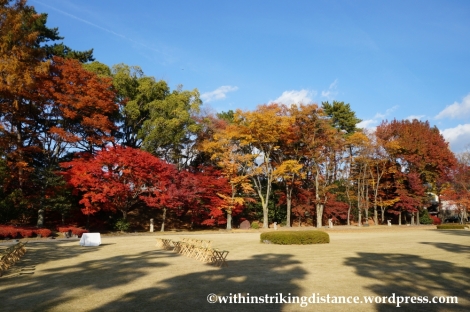 And that was pretty much it. If memory serves, we discussed the possibility of visiting other places whilst the sunlight lasted, but we agreed in the end that there wasn’t enough time. Not that the day was done, far from it: after retreating to our Ōsaka hotel and getting a bit of rest, I and my siblings separated from our parents and wandered off to do what Ōsaka folk do best.