From the wintry wonderland of Sapporo, I flew hundreds of miles south to the (somewhat) warmer climes of Ōsaka, where I enjoyed a visit to one of the country’s finest aquatic attractions.

After breakfast, I got my things together and headed for Sapporo’s New Chitose Airport, where I was due to catch ANA Flight NH 776 bound for Ōsaka’s Itami Airport. The flight wasn’t due to leave until 11:25 so I thought I had plenty of time to spare.

Well, as an old proverb from my corner of the world goes, maraming namamatay sa maling akala (many die from false assumptions).

I shouldn’t have been surprised to find the airport a crowded, heaving madhouse, with long queues snaking around the check-in lobby, moving about half as fast as frozen treacle. It was the tail end of the Yuki Matsuri after all, and the massive influx of festival-goers was now starting to flow the other way, back through the airport and train stations to the rest of the country and the wider world beyond.

Not to worry – I did make it to the gate ahead of time, and even had a few moments to admire a little piece of aviation and anime history rolled into one.

From Itami Airport, I hopped onto a shuttle bus that took me straight to Shin-Ōsaka Station, the city’s main shinkansen hub and next-door neighbour to my home for the next few days: the remm SHIN-ŌSAKA.

Let’s have a look at the room. Compact, contemporary, complete . . . and equipped with one of the most complex toilet control panels I’ve seen anywhere in Japan. The fridge was a bit of a joke, though: it might look like a typical in-room unit from the front but it was only about as deep as a can of cola (so forget about storing cakes or boxed lunches in there).

Oh, and that seat with the black cover’s a massage chair. Nice. 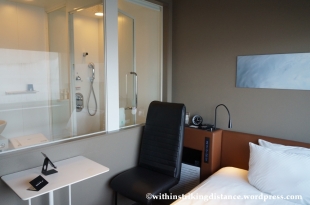 It was mid-afternoon by the time I arrived in Ōsaka, so I settled on just one sightseeing target for the day: the city’s massive Kaiyūkan aquarium.

Standing next to the aquarium – and serving as a useful landmark for the short walk from Ōsakakō subway station – is the Tempozan Ferris Wheel, which held the title of world’s tallest from 1997 to 1999. 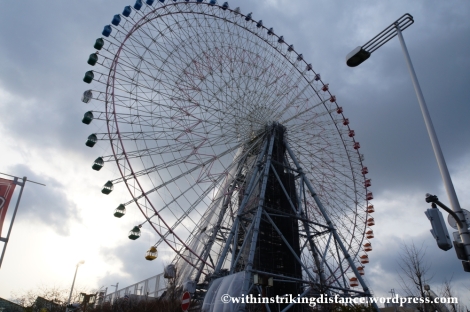 The Kaiyūkan looms large over the broad plaza that leads to the entrance . . . 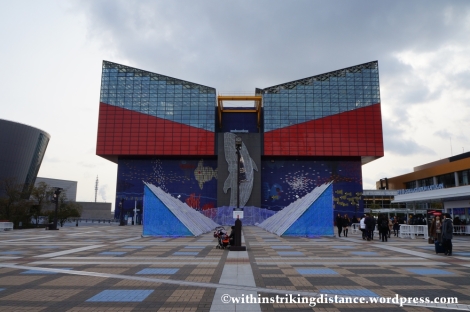 . . . and it certainly needs to be large, in order to hold all of the amazing exhibits inside – including a recreated forest habitat.

Adorable blubbery mammals are always popular with the masses, and the Kaiyūkan has plenty of those. 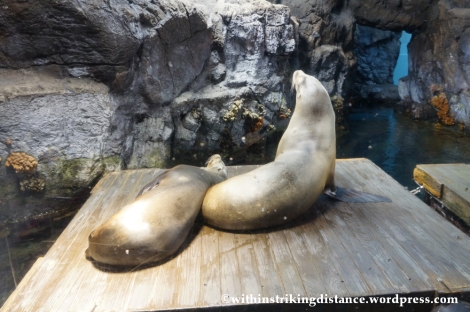 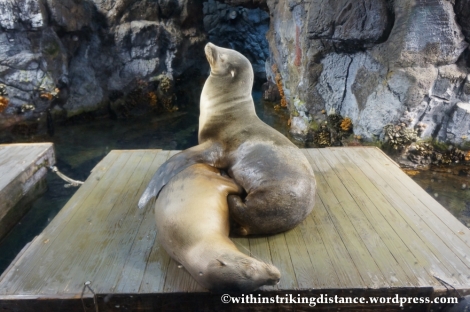 Seems this one’s looking for a challenge.

Others are quite content to laze about and do absolutely nothing. 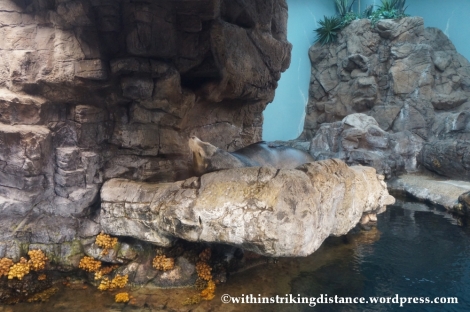 This may be a giant aquarium, but land-based critters are also well represented here (most, unsurprisingly, because they live near bodies of water).

You want dolphins? They’ve got dolphins.

Some exhibits can turn out to be pretty interactive. Take this playful creature, for example (can’t remember what the label said but I think it’s a sea lion of some kind).

The young lady in front of the glass noticed how the seal was drawn to the pamphlet she was holding. She placed it right up against the wall and slid it up and down, the animal bobbing along with it like a playful child or a dog watching a stick being waved. “Omoshiroi!” (How amusing!), she exclaimed as the seal played along. Wish I’d taken a video.

I love how the exhibits are organised, with tanks designed to show cross-sections of various aquatic habitats. Rivers, for example . . . 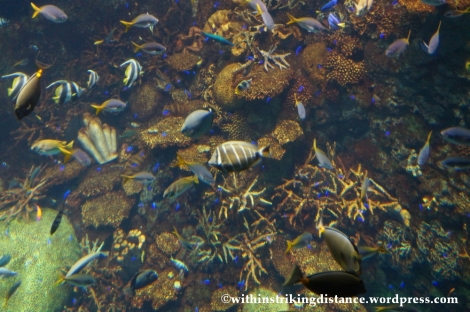 . . . or rocky outcroppings with various bits and pieces of marine “garbage” thrown in for effect.

But the living, beating heart of this facility is the massive glass-walled tank right in the centre of the building, with sloping passageways that allow visitors a good look at its many occupants, regardless of the level they normally inhabit. Whale sharks, giant rays . . . you name it, it’s probably somewhere in there. 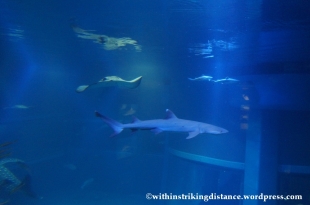 They’ve also got loads of animals from colder climes, including flocks of penguins.

There’s even an aquatic version of a petting zoo, where visitors can get their hands on some living specimens in a shallow tank. 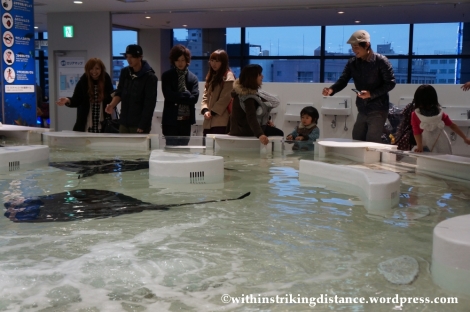 Naturally, there’s a row of sinks close by to wash off afterwards. 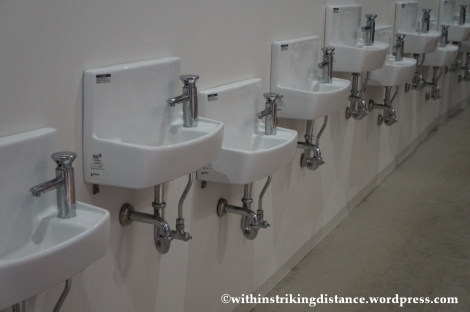 I haven’t shown everything I saw in the Kaiyūkan – there’s just so much to see there – but I think you’ll agree that it’s well worth a visit.

And as I stepped out on the way back to my hotel, I was treated to yet another amazing show.

Nice way to cap off a great day in Ōsaka, but we’ll have even more to come.