Where Diego travels in style, hikes himself into exhaustion, and meets a creepy dummy.

My second day in Japan ended up being quite packed, so we’ll take it in two separate posts. First, let’s go on a morning trip to the old castle town of Takahashi.

The fastest way to reach Takahashi – less than an hour from Okayama by train – is by JR’s Yakumo limited express service. The hardware may have been quite old . . . 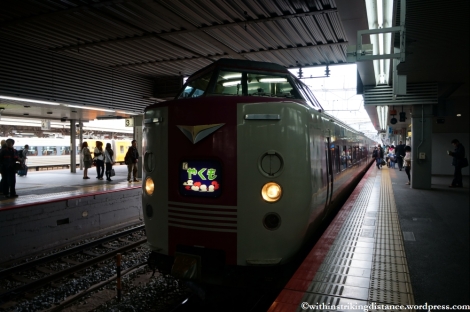 . . . but the Green Car was nothing to scoff at. Reclining seats, footrests, generous seat pitch, and a 2-1 configuration that gives one substantially more space than the standard 2-2 layout of many ordinary carriages. 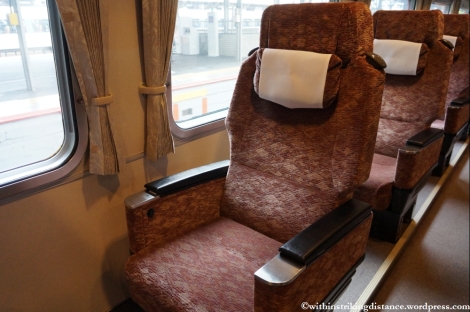 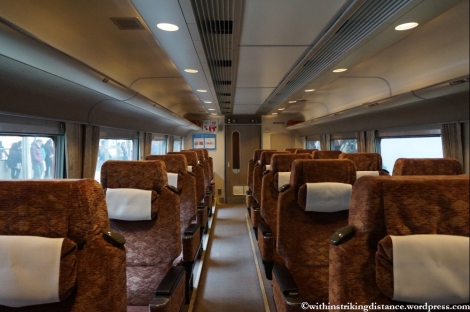 The route from Okayama to Bitchū-Takahashi.

I got off the train at Bitchū-Takahashi Station and started looking for the tourist information centre, eventually finding it in a nice little shed that stood on the edge of the station plaza. The woman manning the booth was just starting to open up, so I waited until she was behind the counter before asking for information.

She spoke almost no English, but was as helpful as can be and would no doubt have gone to great lengths to assist even non-Japanese speakers with whatever maps and resources were on hand. Using what little Japanese I could muster, I indicated that I wanted to see the castle. She explained the options: a very long (but doable) walk, a rather expensive taxi ride to the parking lot (which still requires a final hike to cover the remaining distance to the castle), or a cheaper shared taxi to the parking lot (still can’t avoid hiking the last bit though).

To give you some idea of the route, here’s the suggested walking path from Google Maps (58 minutes in total if done completely on foot):

The first scheduled shared taxi wasn’t due to leave for another hour or so, but just as I was signing the reservation book and preparing for a long wait, an elderly couple walked up to the counter and also asked about the castle. The tourist officer cheerfully suggested that the three of us take a cab and split the bill.

So it was that I sat in the back seat of a taxi and held a (broken) conversation in Japanese with the man, his wife – at least I assumed she was his wife – sitting up front. In due course, we arrived at the parking lot and set off for the castle, not quite walking together but more or less ascending at the same pace (I climbed faster but stopped more often for pictures).

Bitchū Matsuyama Castle is sited on top of a mountain; in fact, it’s been claimed that this is the highest castle (in terms of altitude above sea level) in all Japan. That alone is quite a distinction, but an added attraction is that it’s one of just 12 castles whose main keep (or tenshu) has survived more-or-less intact to the present day.

As far as mountain hikes go, this one was fairly easy: well-trodden path, signposts along the way, reasonable degree of incline, about 20 minutes or so from the uppermost parking lot to the summit (much longer if you start from the bottom). Still, it was quite clear to me why this place doesn’t get as many visitors as it deserves. The path was mostly unpaved, making me thankful that I’d put on my sturdiest walking shoes. Steep drops mandated constant vigilance. And this was really the only path to the top, short of taking a helicopter; no lifts or ramps for anyone not in the best condition to go all the way or worn out at mid-point.

Somewhere above the halfway mark, we started to come across the first signs of the castle defences. 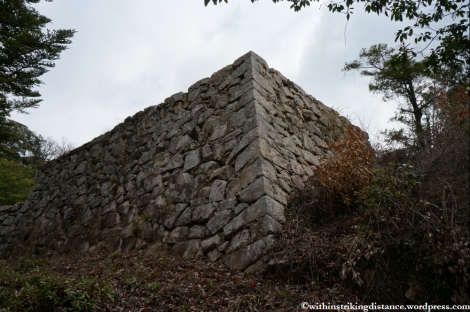 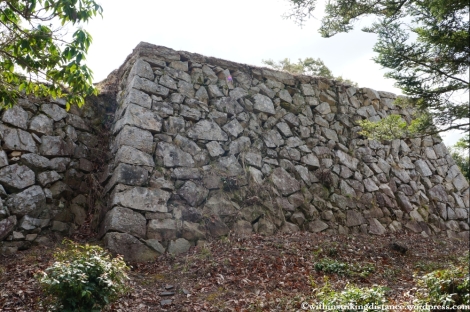 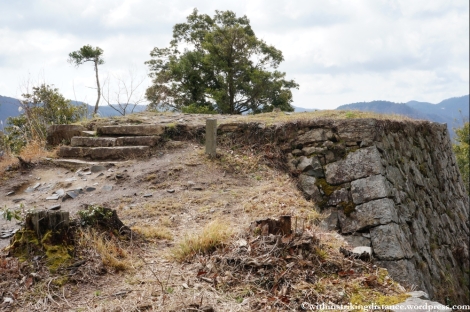 It should be obvious to anyone by now why the head of this domain chose to build his castle up here. Given that there was very little room for a besieging army to work effectively, and the series of walls and watchtowers strung along the road long before the castle itself even comes into view, any poor warlord charged with taking the castle would probably have sent the following reply:

To the supreme leader Tokugawa Ieyasu:

Having received his august lordship’s order to lay siege to Bitchū Matsuyama Castle, and having diligently examined its fortifications and all possible means of attack, I have come to the conclusion that the only feasible response to this lunatic command would be for me to commit seppuku.

Enclosed please find my sword stained with evidence of the performance of the same.

Yours sincerely, the late Daimyō of Chanpuru Domain.

Taking on something like the massive walls and defences of Himeji Castle would be difficult, but even that would be a walk in the park compared to this small but terrible monster.

Further on, closer to the top, the defensive works are more densely grouped together and in somewhat better condition. 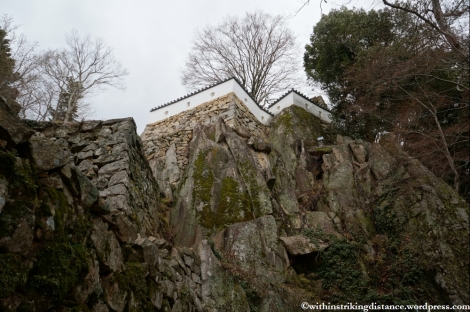 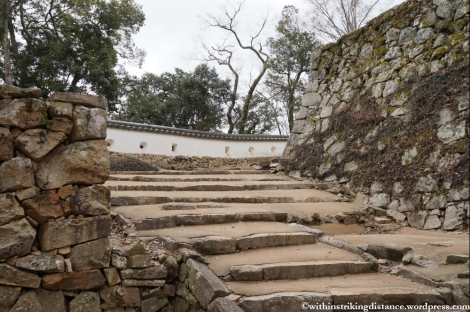 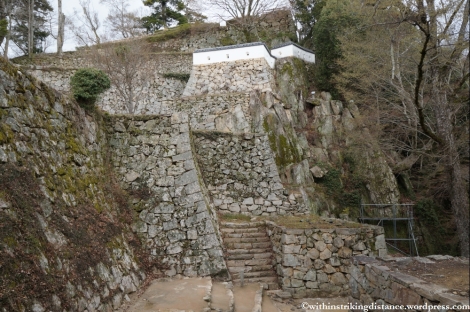 Yeah, try marching an army up here and getting them into some semblance of an organised siege machine on a path barely wide enough for two people and whilst defenders are raining rocks, arrows, shot, and hot water on you from above. Starving them into submission, maybe; launching a direct attack, downright crazy.

Finally, after a final push towards the top, I found myself rewarded with a view of the innermost citadel, the honmaru.

Through the gate (there’s a small entrance fee), I finally found what I’d been looking for.

Much smaller than Himeji, but as my visit to Hikone Castle taught me, in the world of Japanese fortresses bigger isn’t always better.

There was also something about my visit that lodged itself firmly in my memory. As I was walking around the honmaru, a strong wind blew across the mountain with such force that it caused the forest all around us to raise a terrible din. It was as if the wind itself had a voice – a deep, roaring, angry voice. Had quite the chilling effect on me.

After my time at the castle, I trekked back down to the parking lot and killed time with a beverage (rural this area may be, but even vending machines have made it up here) whilst trying to decide how to return to the town proper. Fortunately, a couple of fellow foreign visitors turned up in a cab, which I hopped into after they had disembarked.

I had time to spare before my train, so instead of heading for the station immediately, I made for the old part of town and poked around in two old samurai houses that were open to the public.

It was there that I met The Creepy Dummy. 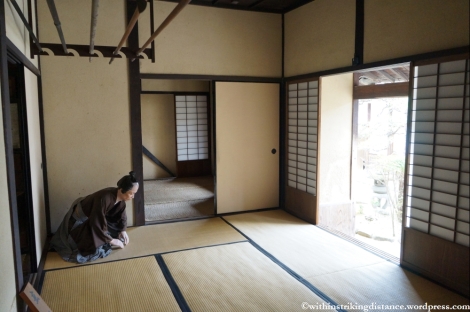 He’s the chap on the left of the picture above. I won’t spoil the fun, but let’s just say that if you step on a certain spot on the floor as you’re entering from the right, well . . . you’ll find out.

More pictures from the two houses (entrance to both is included in one ticket), plus a photograph of the lovely old-fashioned street on which they were located. 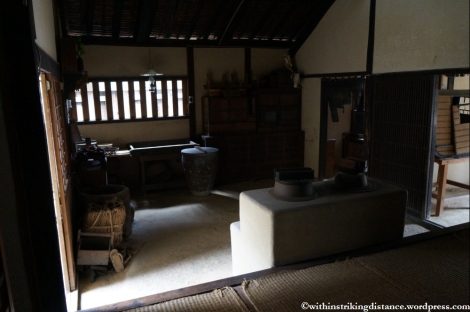 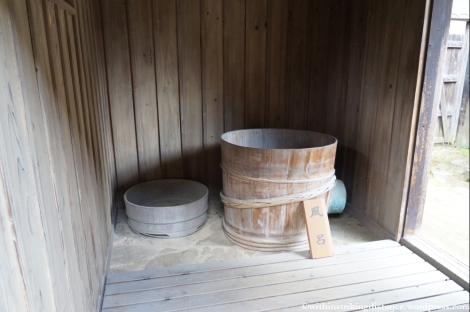 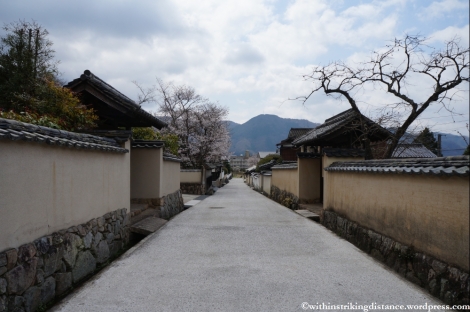 Finally, I started walking back to the station. Nothing extra special about the next picture – I just felt that the vista screamed Japan with the classic tiled roofs, the mess of wires, the lights and signposts. The sort of scene you’d expect to feature in a Shinkai Makoto film with every rusty nut and bolt depicted in lifelike detail. 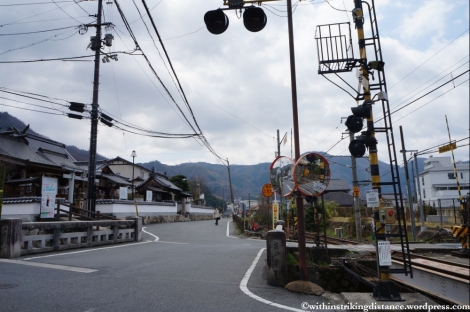 This being Japan, and this being springtime, I also caught sight of some lovely sakura along the way. 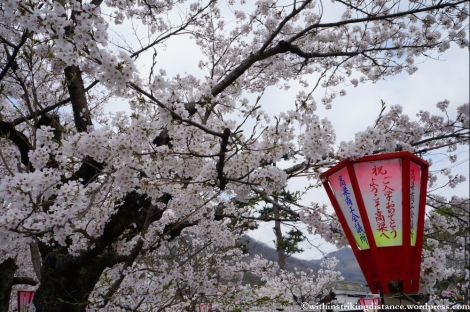 Coming in the next post: a bit of sightseeing in Okayama after returning from Takahashi.