A couple of winters ago, I sampled recreations of tea and confectionery that the Joseon-era kings of Korea once enjoyed … and I did so right inside their own palace. More than a year later, I was served yet more royal treats, except that the setting was Shuri Castle (in Japan’s Okinawa Prefecture) and the sweetmeats I savoured once graced the tables of the Kings of Ryūkyū.

Where? Within the grounds of Shuri Castle (首里城, Shuri-jō) in Naha, Okinawa Prefecture. The Sasunoma tea room is an integral part of the reconstructed royal palace at the heart of the castle compound; hence, visitors must enter the paid area of Shuri Castle before they can access the tea room.

Operating hours? 0930-1800 (last order 1730). Note that Sasunoma follows the opening and closing days of Shuri Castle. When the core paid area of the castle is closed, such as for periodic maintenance (normally on the first Wednesday and Thursday of July every year), the tea room is likewise inaccessible.

How much? The tea and confectionery set costs 310 yen. Bear in mind that one must also pay the admission fee for the core area of Shuri Castle to access Sasunoma in the first place (820 yen for adults; refer to the castle’s website for further details).

English menu? No menu as such, since there’s really just one fixed tea set on offer. That said, detailed descriptions of the tea and confectionery served – as well as of the historic building around you – are available as laminated sheets (in Japanese and English) on each table.

Time of day and type of meal? Mid-afternoon snack.

Shuri Castle (首里城, Shuri-jō) was once the principal residence of the royal family of Ryūkyū, back when modern-day Okinawa Prefecture was (at least nominally) an independent kingdom. Even after the realm was formally annexed into Japan in 1879, the castle endured as a historic landmark, with its iconic main hall saved from demolition by being reused as a Shintō shrine building. Largely destroyed in 1945 during the Battle of Okinawa, Shuri Castle was gradually rebuilt in the decades that followed, and is now a key tourist draw in the prefectural capital of Naha (as well as a component of a UNESCO World Heritage Site).

I’ll write a separate report in due course covering my visit to the castle, so let’s say no more about the wider compound here. Instead, let’s focus on one particular section of the royal palace: the Sasunoma (鎖之間).

This elegant suite with garden views was originally built as a withdrawing room for Ryūkyūan princes, and as a venue where less formal meetings and receptions might be held. Painstakingly reconstructed in the 21st century using archival documents and photographs, the Sasunoma hall is now used as a tea room where visitors can sample traditional Ryūkyūan confectionery.

The centrepiece is the Osasunoma, a large room divided into three sections. Here’s one corner of the room, fitted with the same type of table found in the other sections (although orientated differently).

A supremely relaxed setting indeed, with the tatami floors and cushions and (perhaps most importantly) air-conditioning all working in concert to offer some blessed relief from the early summer heat outside. Note the sunken foot-well underneath the table – another blessing, at least for those (myself included) who don’t fancy sitting either seiza-style or cross-legged for more than a few moments.

Needless to say, the tables and the foot-wells and (obviously) the air-conditioning aren’t authentic features of the room as it once existed during the days of the Kingdom of Ryūkyū. Nonetheless, I appreciate how they’ve been seamlessly incorporated into the architectural fabric of this restored palace building. The overall result is a comfortable refuge from the tourist crowds and the blazing afternoon sun; so comfortable, in fact, that I was sorely tempted to sprawl out on the springy floor and doze off.

Just around the corner is the Uragoza, a small room where tea was brewed. Well, back in the old days, anyway – now it’s probably just for display. 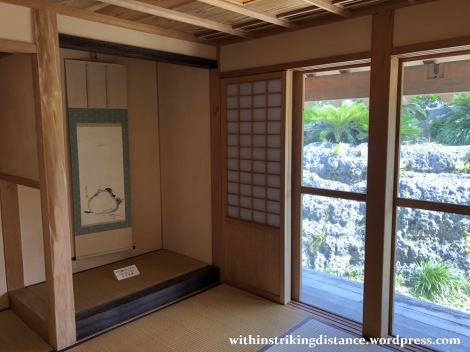 Along one side of the Sasunoma is a corridor that leads back out to the main palace halls.

Now then, so much for the setting. Time for tea.

The price of the standard tea-and-confectionery set is 310 yen. Note that this is on top of the general admission fee that gets you into Shuri Castle in the first place.

There are small lockers available for shoes and bags. Stuff your belongings in, step up into the Osasunoma, and let the attendant usher you to a vacant spot.

Whilst waiting to be served, have a look at the richly illustrated laminated cards on the table and learn more about the room you’re in – as well as the refreshments you’re about to consume. There’s also a card listing some of the ingredients employed to make each item; useful for those with dietary restrictions.

Before long, an attendant will shuffle in with your tea and sweets, all artfully arranged on a lacquered tray.

The beverage on offer is Sanpin tea (さんぴん茶, sanpincha). Brewed from green tea leaves mingled with fragrant jasmine petals, this refreshing hot drink was introduced into Ryūkyū from China about six centuries ago. Since then, it has become something of a local staple, sold everywhere from vending machines to convenience stores to refined settings such as we see here. 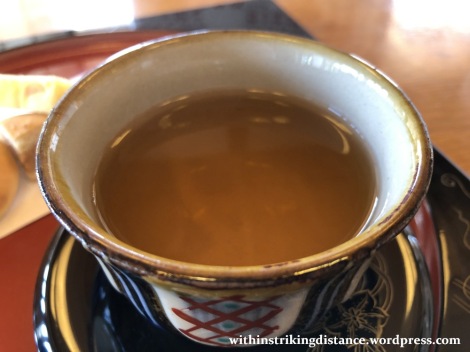 I should also point out that refills are free of charge. When the bowl runs low, don’t hesitate to ask. Unless – as we’ve experienced ourselves – an attentive member of staff offers more tea even before one makes the request.

The fragrant, smoothly flavoured sanpincha is a delight on the palate, but the real stars of the show are sitting elsewhere on the tray. 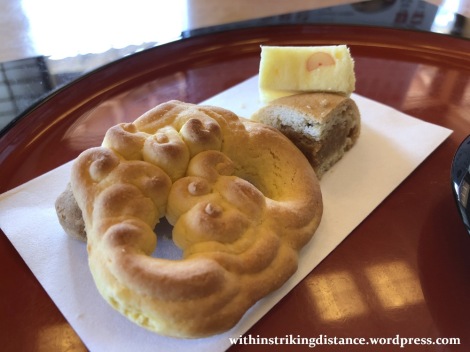 Here we have a sampling of traditional Okinawan delicacies: modern-day descendants of Ryūkyūan confections once served to esteemed guests of the royal court (perhaps even in this very same room). Starting from the foreground and moving anti-clockwise, we have:

Since the last item is barely visible in the image above (with only a tiny bit peeking out from under the left side of the hanabōru), here’s a picture I took of similar chinsukō purchased later from another Naha shop.

Do bear in mind that you’ll only be served one piece of chinsukō with the Sasunoma tea set, not two as shown here!

At certain intervals, a member of staff will pop into the room and deliver a light commentary about the tea and sweets served, as well as the Sasunoma pavilion and the restored royal garden outside its windows. The commentary is purely in Japanese, but easy enough to follow even for those with just a smattering of the language; more so because of the detailed description cards provided at each table (English available).

And that, my friends, is that. A royal treat indeed, all for just 310 yen: much less than the 500 yen or so that some tea rooms within tourist sites – like large Japanese gardens, for example – might charge for a similar set. (And in those cases, one would usually receive no more than a single piece of mass-produced confectionery.) For a varied and beautifully presented sampling of authentic Ryūkyūan sweets in a lovely and historic setting, this price represents such excellent value that one might consider visiting Shuri Castle, and paying its separate entrance fee, merely to take tea in Sasunoma and nothing else.