It’s taken 3 flights on the Cathay group – 2 bound for Okinawa, and the first leg of the return – to reach this point. Now, on the final leg of our homeward journey, let’s see if Cathay Pacific can maintain the solid performance they’ve shown so far.

Note: Schedule/route information, equipment type, and other details are accurate only for the specific flight reviewed here. This information may not necessarily apply to previous or future flights, even by the same airline under the same route and flight number.

This report covers the second leg (HKG-MNL) of an OKA-MNL journey, with HKG as the transit point. Click here to read my review of the first leg, OKA-HKG (KA379). You can also read my earlier reviews of the related outbound MNL-HKG (CX908) and HKG-OKA (KA378) flights.

For the sake of brevity, I’ve used the airline’s IATA code (CX) throughout this report, instead of the full name “Cathay Pacific”.

Here’s B-HNF on the tarmac at HKG. The bird’s fast approaching its 21st year, but unlike the somewhat younger A330-300 B-HLV that we flew on a few days earlier, this aeroplane is wearing a fresh set of clothes: namely, the new CX livery introduced in November 2015. 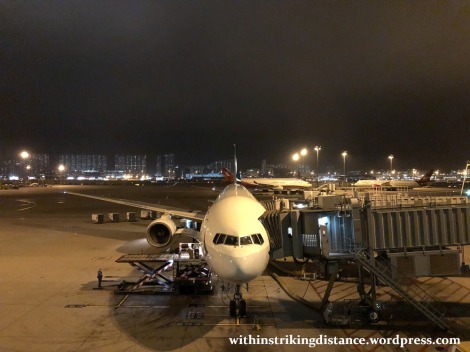 Granted, it’s not obvious from the frontal shot I’ve posted here. But the paintwork on the nose and rudder, along with the dark green (as opposed to white) brushwing devices barely visible on either side of the cockpit, are dead giveaways.

We paid USD 497.29 per passenger for the round-trip flight from MNL to OKA via HKG, plus an extra USD 10.00 each for optional travel insurance. It’s a little expensive for the route – especially when one considers the rather frequent availability of special fares – but this was a holiday planned on relatively short notice, with inflexible schedule requirements that left us unwilling to choose flight times available at lower rates. The amount was all-inclusive, save for the travel tax of PHP 1,620.00 that Filipino citizens (with certain exceptions) must pay when flying out of the country.

On this route (OKA-MNL via HKG), Economy Class passengers are entitled to a free check-in baggage allowance of up to 2 pieces, weighing a total of 30 kg. The carry-on allowance is 1 piece, plus an additional small item such as a handbag or briefcase, with a total combined weight not exceeding 7 kg. There are also limits on the dimensions of each piece of luggage, whether checked or carry-on.

For the fine print and other details, read the guidelines on CX’s official website.

As we were travelling under a single booking reference, and because KA (the operating carrier for the previous leg) and CX (in charge of this flight) were essentially a single airline operating under two brands, our luggage was easily checked all the way through to MNL at the OKA airport counter. This freed us up for a smooth transit in HKG, since we didn’t have to reclaim our bags and check them back in for the second flight.

Hong Kong International Airport (IATA code: HKG) was the transit point between our previous flight – KA379 from OKA, which I’ve reviewed in a separate post – and the connecting flight to our final destination.

The transfer process was made slightly more complex by the fact that our preceding flight, KA379, had been directed to dock at HKG’s North Satellite Concourse: an isolated mini-terminal designed to handle narrow-body aeroplanes.

Unlike the similarly isolated, but much larger, Midfield Concourse, this island of a building isn’t connected to HKG’s Terminal 1 by a train or automated people mover. Instead, passengers must board large low-floored buses that regularly shuttle back and forth between the concourse and main terminal.

Having traded one building for another, and with transfer formalities (just a security check) completed, we emerged back up into the cavernous interiors of HKG’s centrepiece Terminal 1.

Our outbound connection was approximately four hours long, which gave us plenty of time to enjoy HKG’s facilities at our leisure. The connection was tighter this time at less than two hours, and our delayed arrival from OKA reduced that window even further.

Nothing for it then; let’s just head to the gate.

Boarding was pretty much as one would expect: a queue for priority passengers, and another queue for us peasants in Economy Class.

Since we were using a large aeroplane, two aerobridges were deployed – one for the Business Class cabin and another further aft for Economy.

As of this writing, CX operates six variants of the Boeing 777-300. This particular unit, B-HNF, was fitted with 42 Business Class seats (seven to a row) and 356 Economy Class seats (nine abreast). I wasn’t able to take any pictures of the forward section this time around, but the seats would have been similar to the following regional Business Class product installed on the A330-300 we’d flown in a few days earlier (flight CX908 to HKG). 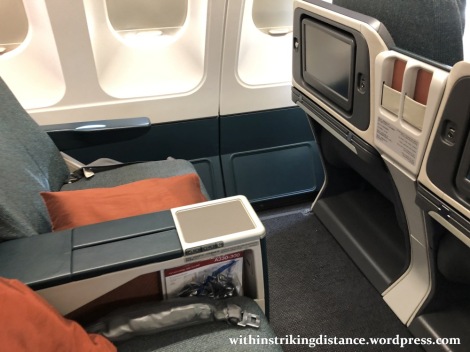 Another feature shared with that earlier flight was the seat equipment in the Economy Cabin, which featured CX’s old (and not very nice) “shell seats”. I’ve already made my opinion clear about these things in my review of CX908, so let’s dive straight into a closer look at the hardware.

I pre-booked our seats on the outbound MNL-HKG-OKA leg, which is available for certain fare classes at no extra charge. However, I wasn’t able to do so on the return OKA-HKG-MNL leg because that was on an ineligible fare class; the seat assignments were issued upon check-in. We were seated in row 42 for this flight, middle seat J and window seat K (aisle seat H was occupied by another passenger).

The bulkhead row was, as expected, graced with prodigious amounts of legroom…

…whereas the rows further back (ours included) – well, not so much. But sufficient for my needs, especially on this short flight.

Standard features for the most part: IFE screen and controller, pull-out coat hook, tray table with external cup holder. The power point is hidden behind the tray table, which must be kept unfolded whilst one is charging an electronic device.

Right, that’s our seats all sorted. Time for a snack.

CX913 may have been a short flight, but I was counting on CX – as a full-service carrier with a premium image (financial troubles notwithstanding) – to offer at least some form of complimentary refreshment. I’m pleased to report that they didn’t disappoint.

The light meal was packed into a small paper bag with CX-green ribbon handles. 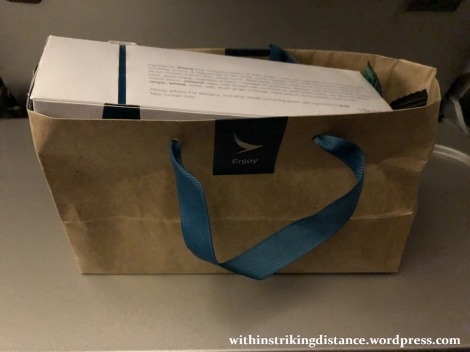 The contents of the bag, unpacked. Today’s dinner-snack consisted of a chicken-filled pastry and a cookie for dessert, served with bottled water to wash the lot down.

Not a full meal-on-a-tray with side dishes and choice of beverage, but certainly more than adequate for the brief HKG-MNL run. (Besides, I was still powered up on a light dinner served during our previous flight, on top of the residual energy digested out of a massive pre-departure lunch back in Naha.)

No amenity kits were supplied. Then again, I wouldn’t expect any airline to hand out amenity kits in Economy Class on short-haul services. No pillows or blankets were distributed, though I’m not certain if these were available on request.

As for the cabin crew – well, I don’t usually have much to say about that side of things, and this flight is no exception. I’m a fairly undemanding and mildly anti-social passenger who tends to avoid speaking with the flight attendants, so it’s hard for me to gauge their performance. That said, from what I could overhear and observe, I’d say their service was thoroughly polite and professional.

The usual basic cattle-class headphones (not noise-cancelling) were stuffed into the seat pockets ahead of take-off, rather than being distributed by the cabin crew.

The airline’s IFE suite – branded as StudioCX – offered an almost bewildering choice of entertainment options. Both Asian and Western films were available, with fresh releases alongside older videos. Alas, the flight was a mere two hours long, not even sufficient for one full-length movie.

As for printed material, CX’s in-house Discovery magazine and Discover the Shop duty-free catalogue (along with newspapers) were on hand for those who’d rather read than watch.

The best part of this holiday was, of course, the holiday in Okinawa itself. That said, a good experience in the air can help set the stage for a successful journey, and bring it to a satisfying conclusion. I’m happy to report that I was quite pleased with the series of CX/KA flights that brought us to Naha and back, and I’d be eager to fly with the same airlines again on this route.

Not everything was perfect, of course. In my previous posts, I’ve pointed out various hiccups that took place during the other three flights that made up this journey. On CX913, the biggest single issue was probably our delayed departure from HKG, which of course led to a delayed arrival in MNL (partly made up in the air) – though this had more to do with ground issues at HKG than anything the airline had done or failed to do.

My thanks to CX and KA for a job well done, and to the readership for keeping me company on this trip.