I love food, but I’m not a foodie. I’m not the sort of chap who would spend hours scouring the streets of Tōkyō or the back-alleys of Seoul in search of new, unique, quirky, pop-up, or Michelin-starred establishments of the sort that critics love to rave about. No, my friend – when I’m hungry, anything from the corner convenience store to the nearest chain restaurant will suffice. I take delight in the familiar, I revel in the tried and true. This of course explains why I’d much rather keep going back to places I’ve patronised before, places I know will do a good job, rather than cast my net wider and rake in something that could be fantastic but could also turn out to be a dud.

And where noodles are concerned, I’ve got my pre-set defaults: places I’d almost automatically home in on when I happen to be in town. In Japan, it’s Ichiran. In Korea – and more specifically Seoul – well, it’s this place.

Let’s zoom in a bit closer. (And switch to the plain map view, to make things a bit clearer.)

The boring details – directions, opening hours, prices, etc. – have all been spewed out in a detailed report I wrote regarding a previous visit, which I invite you to read by clicking here. Since we’ve already got all that sorted, let’s jump straight into things.

Behold, the wooden stage where the magic happens. The supporting cast of characters are all at their appointed places, ready to step in on my command: water to wash the meal down, tissues to tidy up the scene, and even a little mint to cleanse the palate at the end. 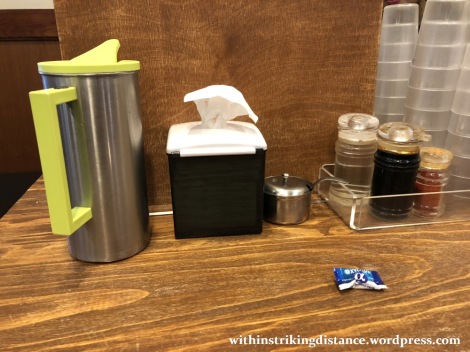 Hush. Here comes the lead. More an ensemble cast than a solo performer – broth and noodle, dumpling and vegetable, crowned with a sprinkling of meat and robed in a glistening veil of oil.

Enjoy the performance as it is, but note that the cast are receptive to suggestions. I, for one, introduce a drizzling of vinegar – and the song is transformed into a symphony.

But wait. Here comes another member of the ensemble. This chap nominally plays second fiddle, but is almost good enough to steal the scene.

The Best Kimchi I’ve Ever Tasted. (Bar none.)

Take a bow, everyone. The standing ovation is well earned.

As is, one might hope sooner rather than later, yet another encore.