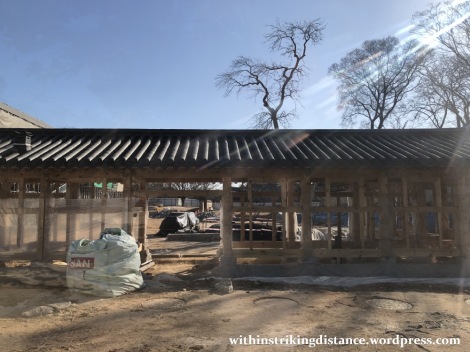 I’ve been to Seoul’s Gyeongbokgung so many times, I can’t even say off-hand how many times I’ve gone there. And one of the things that keep drawing me back to this vast Joseon-era complex is the ongoing, almost mind-bogglingly colossal effort to rebuild the many palace structures destroyed in the early 20th century – a project that, year after year, yields something new for the dedicated repeat visitor.

I always try to fly into Seoul as early as (in-)humanly possible, chiefly to maximise my available sightseeing time. Fortunately, Asiana Airlines brought me all the way from Manila and set my feet on the ground in Seoul by five in the morning – read more about that experience in this flight report.

By half past seven or thereabouts, having already stashed all unwanted luggage at my hotel, I was enjoying the warmth of a downtown café and happily tucking into a bulgogi sandwich for breakfast.

Hunger satisfied, I donned my cold weather gear and prepared to head out into yet another Korean winter.

Bitterly cold it might have been, but the sun was bright and the skies were blue over Gyeongbokgung (경복궁), the largest of Seoul’s five major Joseon-era royal palaces. I’ll spare the readership from a long and boring introduction – Wikipedia can start you off, and these posts describing my previous visits to the palace should help add more colour – so let’s jump straight into things.

I walked to the palace from Exit 5 of Gyeongbokgung Station (Seoul Subway Line 3 / Orange). This brought me through a side door into the first courtyard, with the iconic Gwanghwamun on the southern side…

…and the riotously ornamented Heungnyemun on the northern side, guarding the approach to the inner precincts. 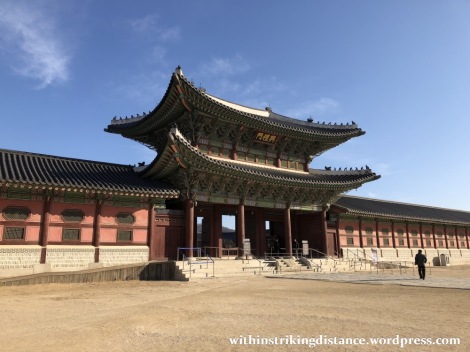 I followed a long and (for me) well-trodden circuit around the vast palace compound, enjoying the now-familiar sight of its many pavilions and enclosures. To keep this post at a reasonable length, I shall refrain from describing these in detail here, nor shall I post pictures of every single structure I passed on my stroll. More images and commentary are available in these reports describing my earlier visits.

Just a small sampling of snapshots, then – a little taste of the beauty and grandeur that can be savoured on a walk through these once-forbidden grounds. 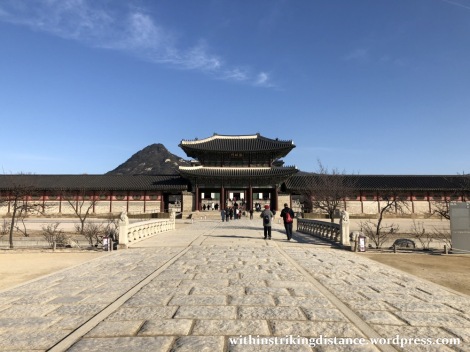 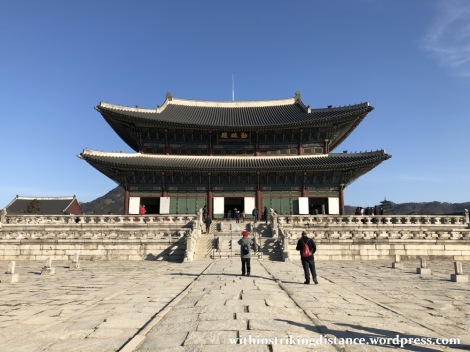 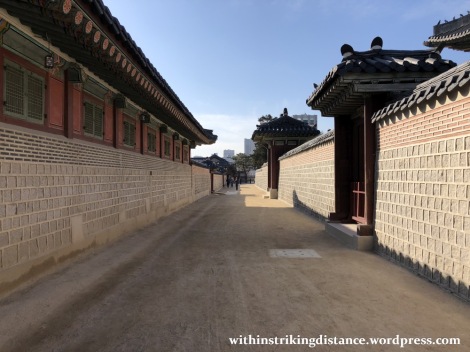 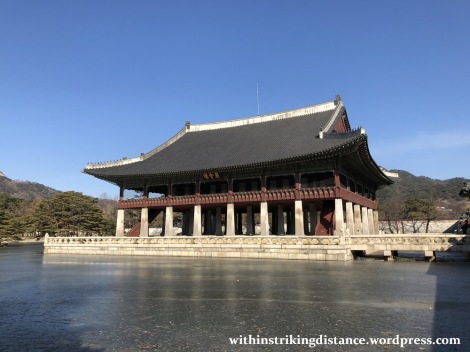 Of course, I didn’t come all the way here merely for a reunion with old friends (or old buildings … well you get the idea). No, sir – I was here to make the acquaintance of what will soon be the newest addition to the grounds.

On a visit in early 2016, I noticed that a large area had been fenced off just north of the palace’s Amisan garden, close to the king and queen’s former living quarters. A peek through windows in the fence showed a great deal of digging in progress. I suspected at the time that yet another ruined palace building was due to be resurrected in the not-too-distant future.

A year later, in 2017, I swung by again and saw that new information boards had been set up on the fence. They were purely in Korean, but I knew enough hangeul to finally put a name to the building they were working on…

…the long-lost Heungbokjeon (흥복전). This hall was built, or rather rebuilt, in the 1860s as part of the general reconstruction of Gyeongbokgung, which had lain ruined and derelict for centuries after being destroyed during the Imjin Waeran of 1592-1598. Initially used as a residence for some of the palace women, Heungbokjeon later served as a royal office and as a venue for diplomatic receptions. Under the orders of the Japanese colonial authorities, the pavilion was disassembled in 1917 to provide materials for repair work at Changdeokgung (parts of which had been destroyed in a fire). After detailed preparatory excavations were carried out in 2005-2006, and again from 2012, a traditional ceremony was held on the site in 2015 to mark the commencement of Heungbokjeon’s total reconstruction.

To put things in the proper context, here’s an illustration of Gyeongbokgung as it once looked after its rebuilding in the 19th century, before years of neglect and deliberate destruction cleared away much of the site. I’ve marked the location of Heungbokjeon with a circle.

Now then, let’s have a look at how far they’ve come along.

Where I’d only seen a fence and foundation work in 2016 and 2017, there was finally something rising out of the ground. 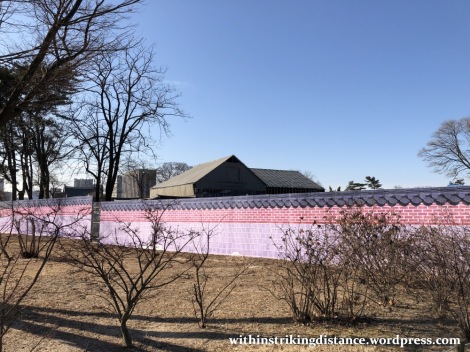 An illustration posted on the fence showed what once stood here – and what will soon rise here again.

Windows in the fence allowed me to take a closer look at the work in progress. (You’ll have to forgive the reflections and glare; these next shots were taken through transparent plastic sheets covering the gaps in the construction barrier.) Note the use of traditional materials and techniques in the resurrected corridors, with wooden beams and ceramic tile giving the structure a suitably classic appearance even in its incomplete state. 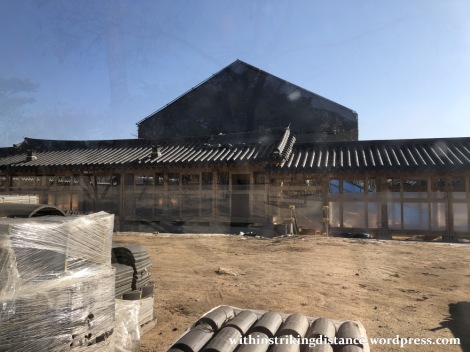 According to a nearby sign, the rebuilding work was expected (as of that time, anyway) to be completed in December 2018…

…after which I shall have yet another reason to return to this, one of my favourite places in Seoul.

UPDATE: Click here to read a new Field Report documenting my most recent visit to Heungbokjeon (27 January 2020). The building is now essentially complete, although its intricate dancheong paintwork has not yet been recreated.