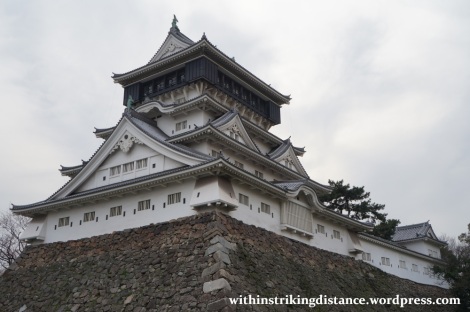 It’s a fact that needs no repeating, but I’ll repeat it anyway: I love Japanese castles. And with a tiny sliver of sunlight still left after my day trip to Kumamoto, I seized upon the chance to add another one to my “been there” list.

After arriving in Fukuoka from Kumamoto, I checked into my hotel and began to settle in for the night … except that it wasn’t quite night-time yet. With a small (though shrinking) window of daylight remaining, and a few precious hours of validity left in my Northern Kyūshū Area Pass, I decided to make the most of things by hopping onto a limited express service bound for the city of Kitakyūshū.

There’s actually a fair bit to see in this area, but with time running short I instantly zeroed in on what has now become my default must-see target for almost any major Japanese destination: the nearest castle. (Assuming it has one, that is.) Fortunately, Kitakyūshū had an ancient fortress of its very own right in the heart of the city – Kokura Castle.

The castle can be reached on foot from Kokura Station – Kitakyūshū’s main rail transport hub – though the walk is a mostly drab stroll across typical urban streetscapes. Things start to pick up when one reaches the river, since the area around this section is quite pedestrian-friendly and strikes me as a nice place to enjoy a leisurely constitutional. 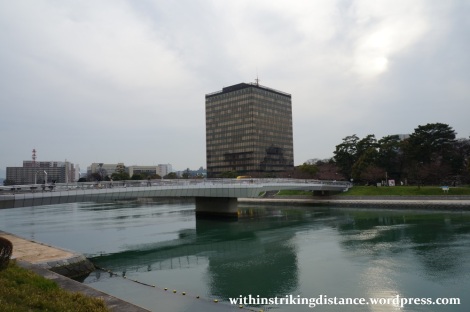 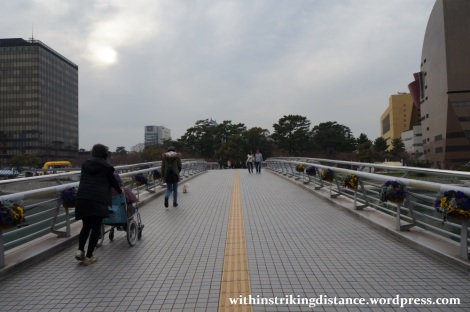 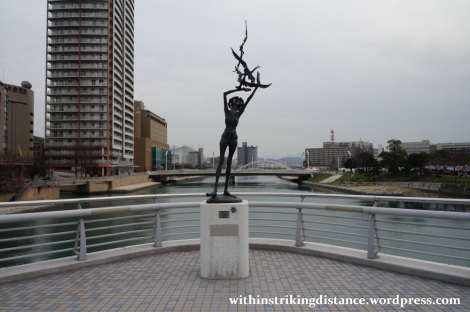 I’m sure you’ve noticed the grey rain clouds hovering above the city, which filtered out a good bit of whatever sunlight was still available. No matter – it wasn’t much further now, and I wasn’t going to stay very long.

The broad promenade leading from the riverbank to the castle was filled with booths and thronged with people, all gathered for a jizake (locally-brewed sake) festival. 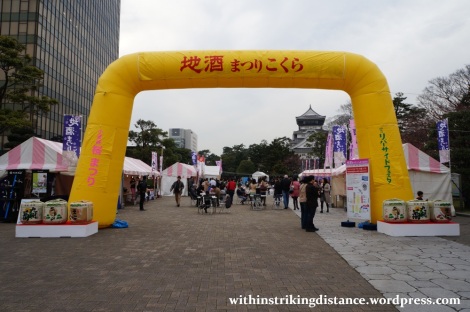 Onwards, then, until I finally came face to face with Kokura Castle’s towering tenshu, perched on top of a lofty stone base. 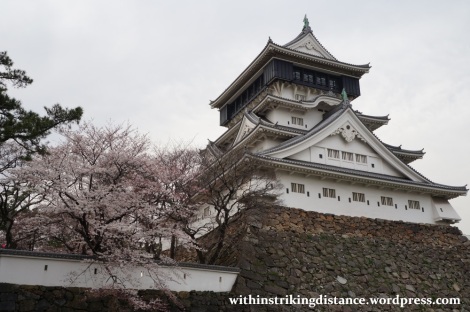 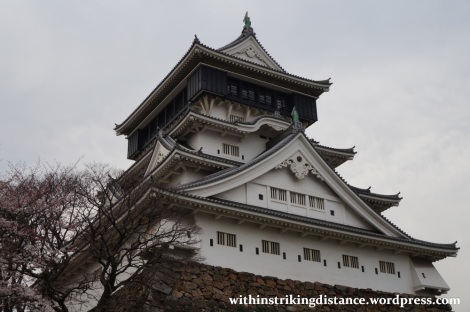 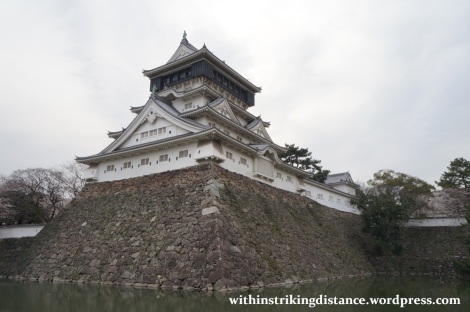 As far as castles go, Kokura isn’t particularly large or well-regarded; in fact, it’s not on the Nihon Hyaku-Meijō list (so no hyaku meijō stamp to collect here, unfortunately). It was first built in the early 17th century, although the main tower we see today – whilst not entirely unattractive – is a (supposedly quite inaccurate) concrete reconstruction dating only from 1959. Few of its original moats and walls have survived intact. On top of that, the museum was already closed by the time I got there (though this was my fault entirely, not theirs), so there was even less for me to see.

Having said that, the reconstructed tower isn’t completely without its aesthetic merits, and the surviving stretches of stone wall that run across the grounds are worth a look. 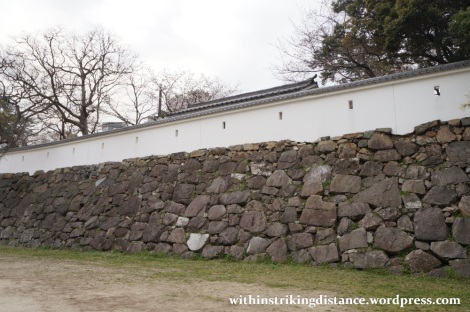 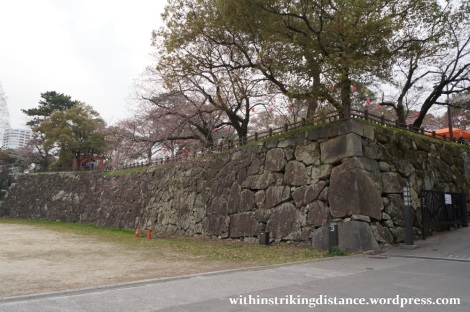 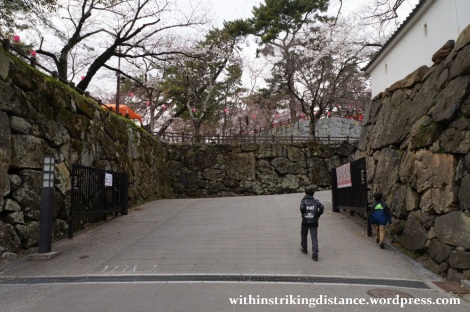 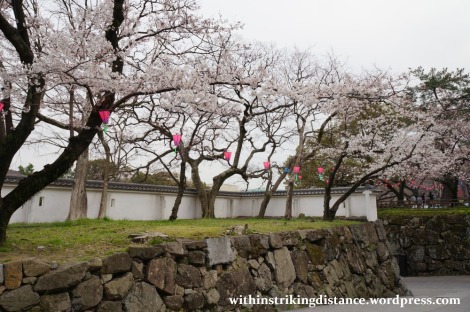 Not far from the castle – in fact, right across the moat from it – is the Riverwalk Kitakyūshū development, a large shopping and leisure centre. The garish paintwork and strikingly modern architecture contrast quite heavily with the castle, and either adds to or detracts from the experience depending on whom one asks. 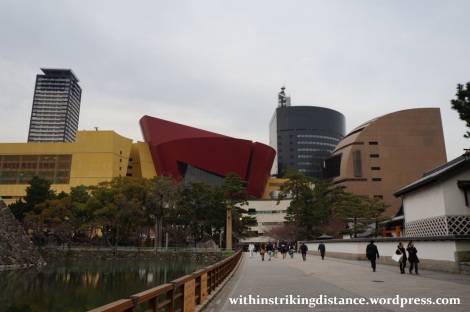 Okay, I got what I came for, and now I’m ready for a good night’s rest. Back to Kokura Station, where I did a bit of trainspotting whilst waiting for my ride to Fukuoka. 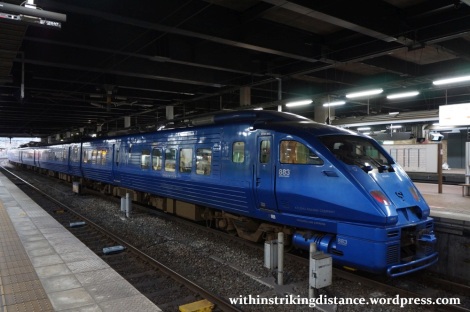 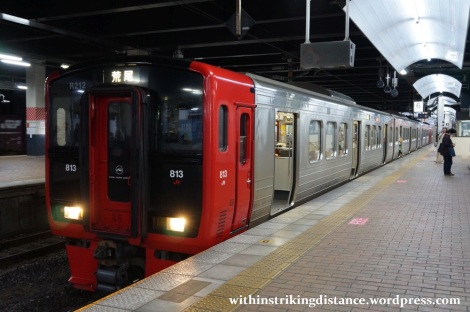 …and finally, the train I was scheduled to board: a 787 series EMU. I call it the Darth Vader train because, well, just look at the thing. 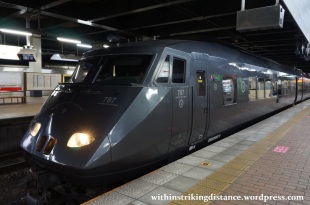 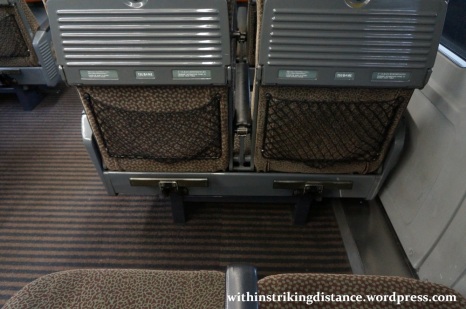 If I didn’t know better I’d say the beast was armoured all over. The ribbed metal tray tables seem to have come straight out of an army transport, and even the upholstery looks as if it’d been woven from recycled soldiers’ uniforms. Might I suggest playing the Imperial March as it pulls into every stop, just to complete the experience? (And have James Earl Jones voice all of the announcements for good measure.)

Less than an hour later, I was back in Fukuoka’s Hakata Station… 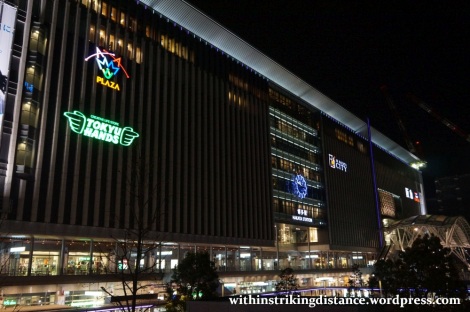 …but before we leave, take a look at this curtained doorway I spotted whilst passing through the building.

This is probably as far as I’ll get, because through that door is the ultra-exclusive lounge for the ultra-luxurious (and ultra-expensive) “Seven Stars in Kyūshū” cruise train. I probably won’t ever get the chance to ride that palace on wheels – not in the near future, anyway – mainly due to the astronomical cost but even more because of the train’s popularity, which (coupled with the limited berths available) means that bookings are awarded by lottery. Doesn’t matter if you’ve got cash to burn for this ride of a lifetime: if your application isn’t drawn, tough luck.

As for myself: tonight I’ll be sleeping not in a train, but in a simple hotel room, with the hope of waking up fully refreshed and ready for one last day of sightseeing in Fukuoka…

…which, as ever, is something we’ll save for a future post.