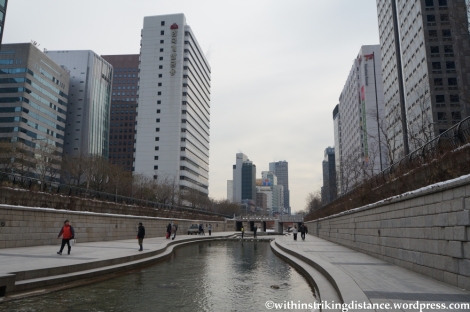 Such is the story of one of Seoul’s newest (and at the same time most ancient) landmarks: the long-lost, now newly restored Cheonggyecheon stream that runs right through the heart of the city.

Cheonggyecheon began life as a creek flowing across the centre of the Joseon capital. Although the watercourse saw periodic maintenance work through the centuries, by the 1950s it had become little more than a dirty, unsightly, neglected canal lined with shanties. From 1958 onward, Cheonggyecheon was gradually covered up with concrete, culminating in the 1970s with the construction of an elevated motorway along its former course. In 2003, the Seoul Metropolitan Government began work on a massive urban renewal project that involved demolishing the motorway and resurrecting the ancient stream, to serve as a new public recreation space for the capital’s inhabitants.

The project was completed in 2005, and today we’re here to see the fruits of the city government’s monumental labours.

From Gwanghwamun Station on Line 5, I went through exit 5 and made my way south to Cheonggye Plaza, the starting point of the restored stream.

The plaza’s most noticeable feature is “Spring”, a towering piece of modern sculpture created by Coosje van Bruggen and Claes Oldenburg. 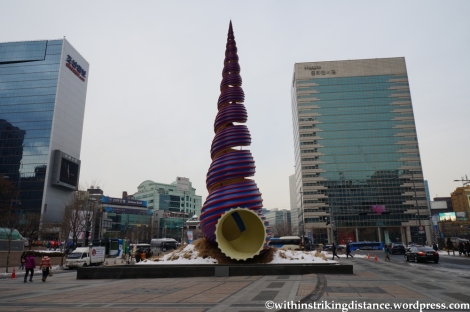 A short walk away, at the edge of the artificial cascade that now provides most of Cheonggyecheon’s water, there’s a good vantage point for observing the start of the stream. 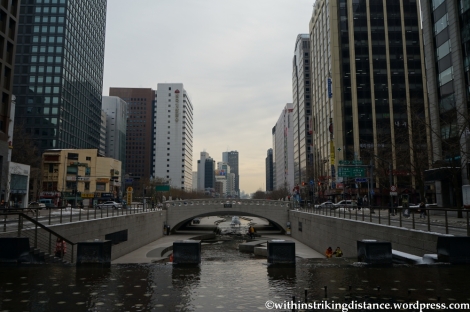 Access points on either side allow visitors to start their walk down the 5.8-kilometre watercourse from either the northern or the southern bank. I went for the entrance to the southern side and soon emerged at the foot of the waterfall, fringed with ice but still flowing quite freely into the stone-lined channel. 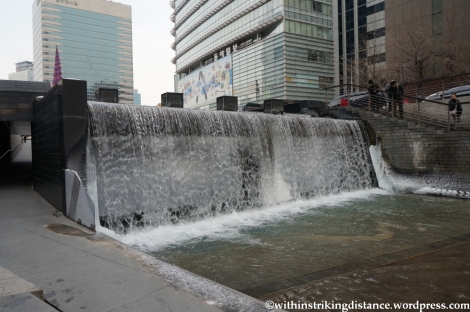 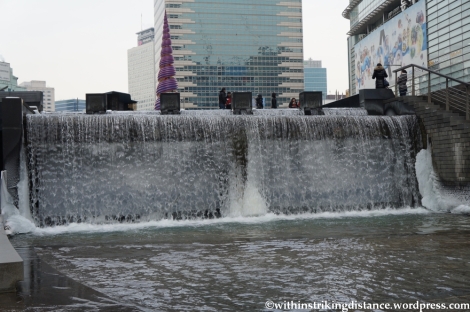 Heading east, I strolled along Cheonggyecheon at a leisurely pace, enjoying the splendid view of Seoul’s downtown skyline as it marched right alongside the stream. 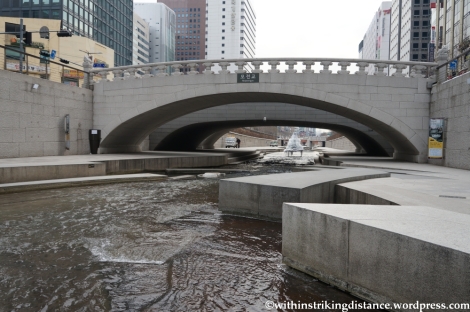 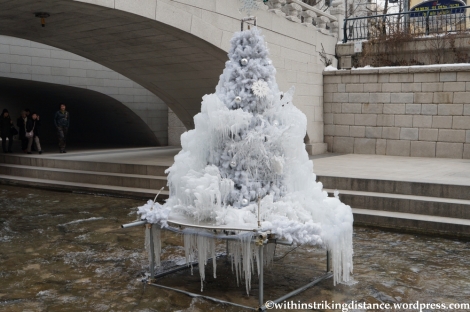 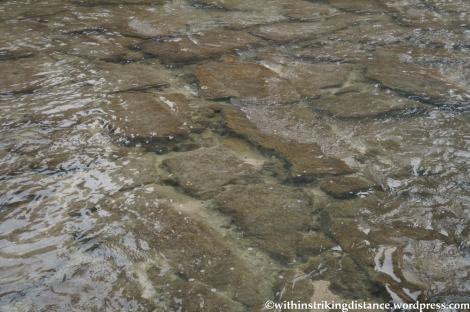 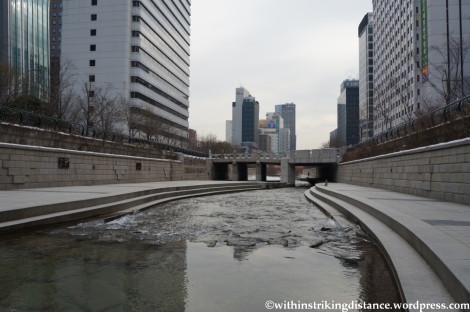 Crossing points – featuring large stepping-stones set into the stream bed – are a great convenience for those wishing to skip from one side to the other. 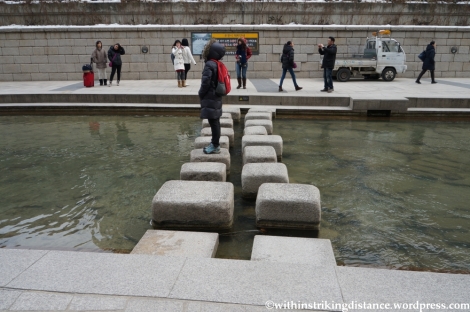 Along the way, I caught sight of one of the city’s oldest landmarks. Let’s keep going past it for now – we’ll come round and have a closer look at later. 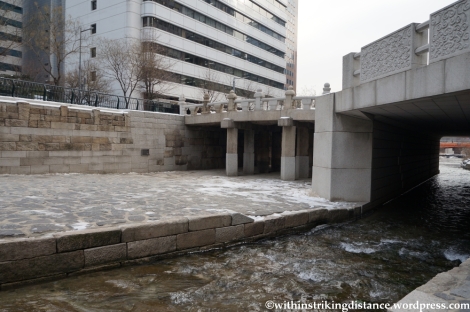 Cheonggyecheon’s fluid, changing design no doubt helps break the monotony of a long, casual walk along its entire length – something that I didn’t really have the energy to attempt. In any case, I did venture far enough to see the stream metamorphose from a rigidly controlled channel with massive stone walls into something more akin to a natural watercourse, with rocks and patches of vegetation (looking appropriately dead in this winter chill) lining its banks. 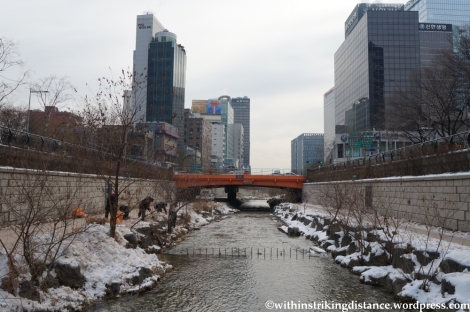 I’d be surprised if I didn’t see further variations if I’d gone even further, but I was quite happy to turn around at this stage. I crossed over to the northern bank by way of a low bridge and began to make my way towards the starting point, back to the ancient structure we caught a glimpse of earlier. 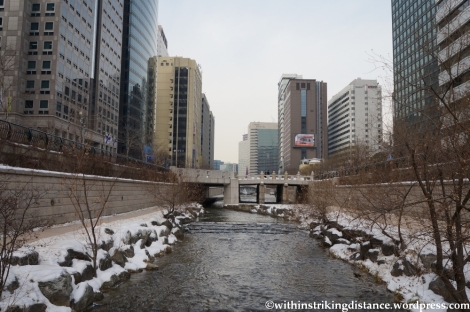 This is Gwangtonggyo, built in 1410 and said to have been the largest bridge of its time in Seoul. 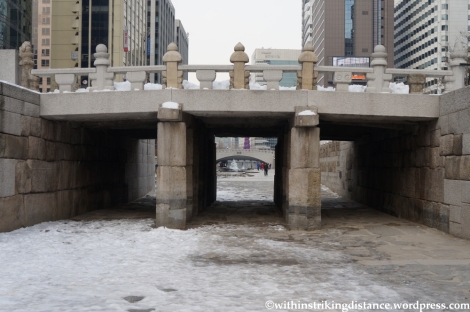 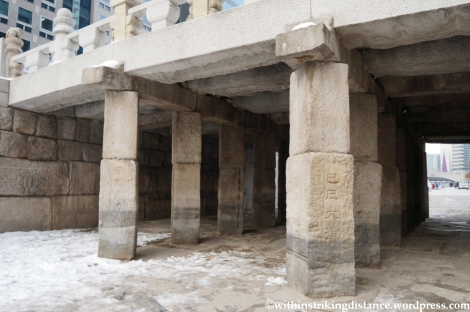 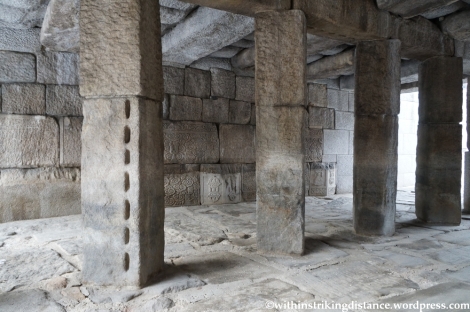 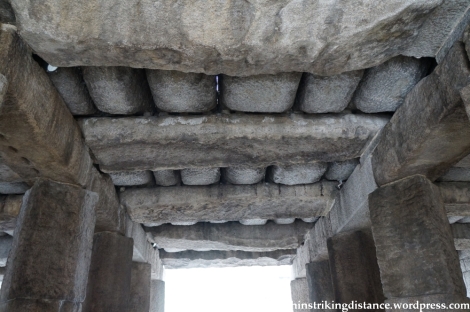 Stop for a moment under the bridge’s span and admire the fine stonework lining the channel. 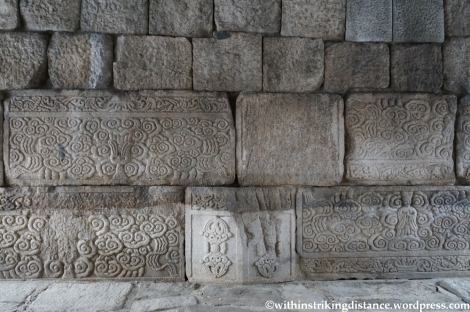 According to the bronze marker detailing the bridge’s history, these carved stones – and probably much of the rest of the structure – were recycled from a former royal tomb.

The bridge was buried in 1959 when the stream was being covered up, and was finally restored in 2005. 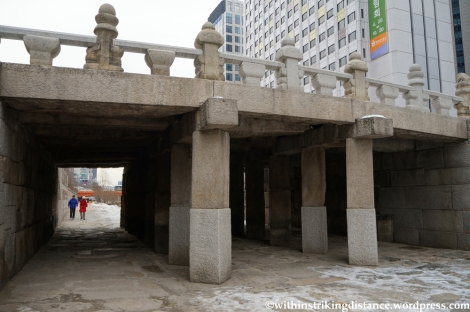 Back to the point where we first started, the grand waterfall that now gives life to the stream. 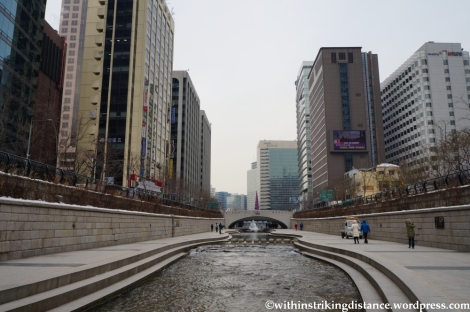 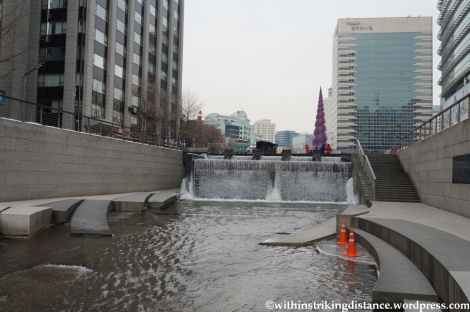 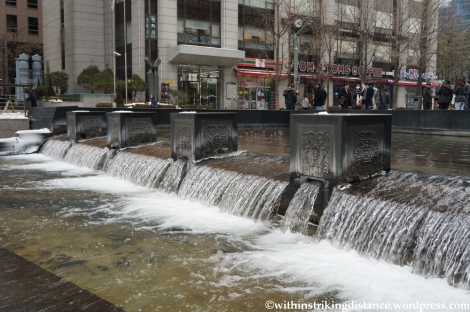 My flight home was due to leave in several hours, but there was time enough to visit one more part of Seoul before I had to bid farewell.

Now for a personal note.

This post was originally scheduled to go up last weekend, but out of respect for those affected by recent events in my corner of the world, I’ve been observing a brief period of blogging silence. The work to rebuild must, of course, continue unabated, and anyone wishing to help might consider heeding the plea for assistance here and here.