In some ways, Deoksugung (덕수궁) is the odd man out amongst the former royal palaces of Seoul. With its eclectic mix of Eastern and Western architecture, this walled compound offers an interesting contrast to the rigidly traditional forms employed in Gyeongbokgung just up the road. Today, we’ll take a close look at one of Deoksugung’s most prominent Western-style structures: a striking reminder of the time when the Kingdom of Joseon broke with its own past and reminted itself as the Korean Empire.

After a morning visit to the National Museum of Korea, I made my way north to City Hall Station (Subway Line 1/2). From there, a short walk was all that stood between me and the front gate of Deoksugung (덕수궁).

…but I’m hoping to keep things sweet and simple today, so we’ll skip all that. Hurrah.

The official website has further details if you’re interested, and you can also check out some of my related field reports for more information and photographs. (There’s also the “Deoksugung” entry on Wikipedia, although I don’t recommend relying on that source as it’s rather short on detail.)

To set the stage for comparing and contrasting, let’s pore over a selection of images taken during one of my previous visits to Deoksugung. Note the traditional Korean architecture employed in the central and eastern sections, which are dominated by buildings that wouldn’t look out of place in Seoul’s other Joseon palaces. 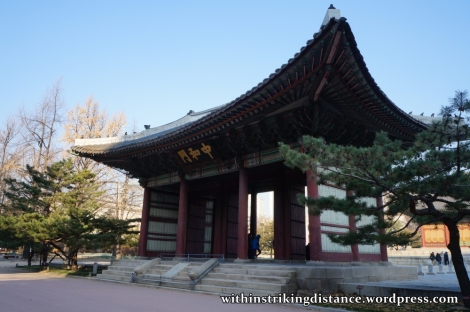 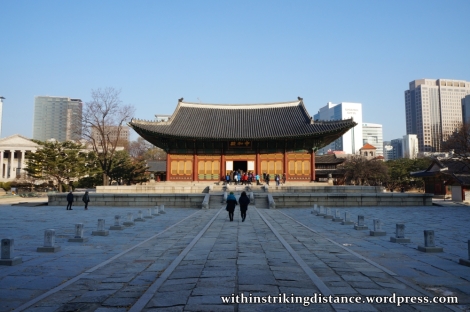 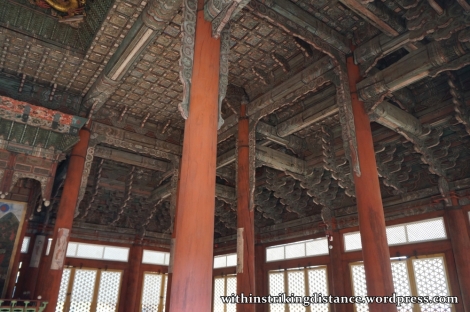 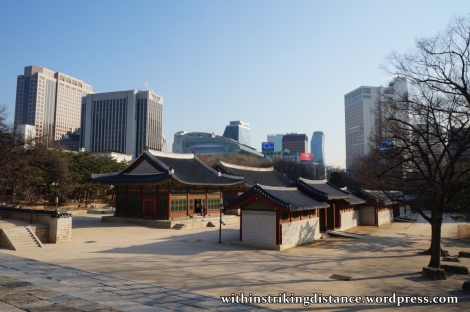 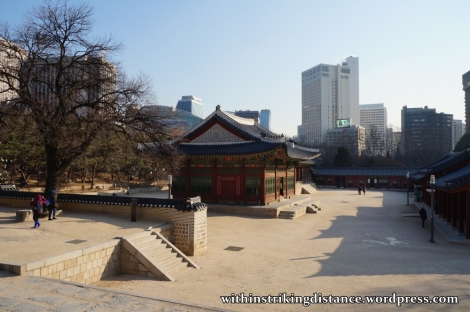 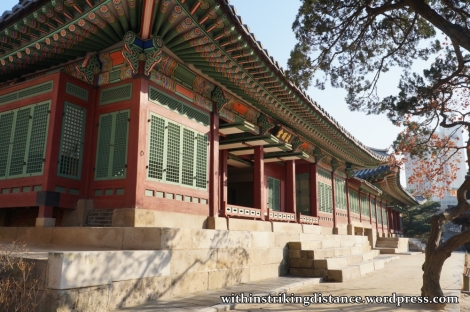 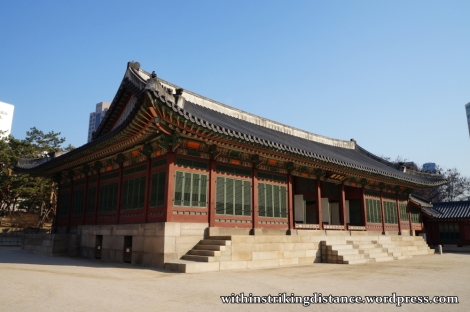 My main point of interest during the present visit was Seokjojeon (석조전), a modern residence – well, modern for its time anyway – in the western part of Deoksugung. Designed by a British architect and completed in the early 20th century, this mansion was probably one of the last major structures built for the Imperial Family before Japan formally annexed Korea in 1910.

A carved stone representation of the Imperial Seal of Korea – the core element of which is a stylised plum blossom – sits within the building’s pediment.

The basement houses a small museum dedicated to the Korean Empire. Any visitor to Deoksugung can access that part of Seokjojeon without prior arrangement; however, the main floors above it can only be visited as part of a guided tour. In addition to advance reservations, up to five foreign visitors and senior citizens are allowed to sign up on the spot for each scheduled tour.

As soon as I entered the Deoksugung compound, I headed straight for Seokjojeon and enquired at the reception desk for available tour slots. Having secured a place in the 13:30 group, I occupied myself by wandering off to study the building’s stately exteriors. 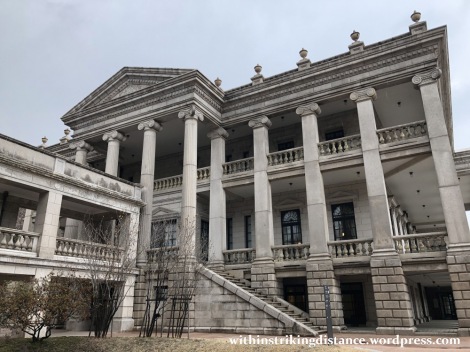 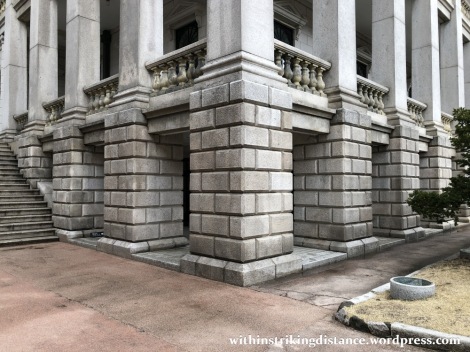 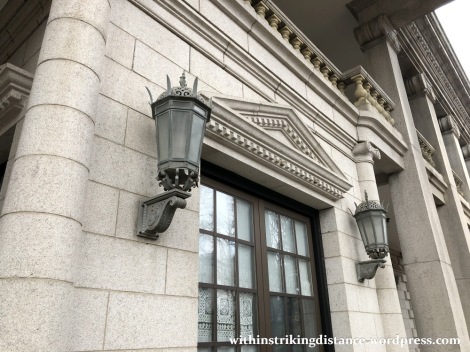 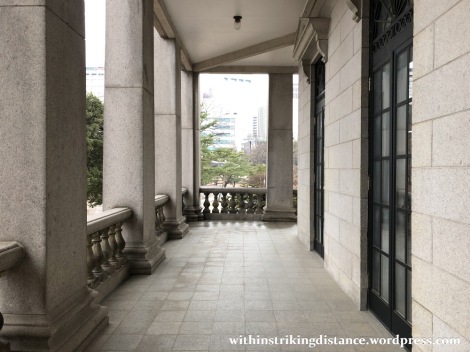 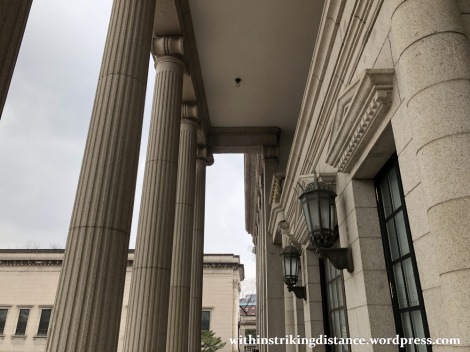 It’s an elegant structure, if rather small for an imperial residence – but one must bear in mind how palaces are normally laid out in the East Asian context. In contrast to the palace of a Western monarch, which would often consist of a single massive building, Korean palaces generally take the form of walled complexes comprised of multiple smaller compounds. Each compound was used by designated occupants, and each building within would play a special role in the life, leisure, and ceremonial of the court. With Deoksugung having lost many of its constituent structures to the ravages of war and colonial rule, and even to the Korean Imperial Family’s own modifications at the start of the modern age, the traditional layout is now best exemplified by the more complete palace grounds of Gyeongbokgung to the north. There, one will find separate living quarters for the king, his consort, his heir, and his mother, each equipped with its own bedchamber and study and reception rooms and so on. Even the royal kitchens have their own separate compound, itself further divided into sub-compounds dedicated to the preparation of different meals or kinds of food.

The point here is that Seokjojeon isn’t so much a palace unto itself, but just one element of a larger palace – Deoksugung – and fulfilling its own role in support of the imperial family’s daily activities. Hence its surprisingly compact size.

That said, and apart from the obvious form of its architecture, this building draws upon Western precedent in another way: by housing different functions once fulfilled by separate compounds or pavilions under a single roof. As we’ll see shortly, whilst a traditionally designed palace like Gyeongbokgung would have separate sleeping quarters for the king and his queen, a separate banqueting hall, a separate kitchen compound and so on, Seokjojeon has all of the above within its walls. Public rooms on the main floor, imperial bedrooms further up, servants’ quarters and service areas underneath.

An English country house plonked down into the midst of a rambling Korean palace. That pretty much sums it up.

Now then, back to the tour.

I returned to the lobby shortly before the appointed time. Shoes off, feet into the provided slippers. (Can’t have peasants like myself trailing mud across the emperor’s parquet floors.) The guide’s live commentary is in Korean, but foreign visitors are lent audio devices with pre-recorded tracks.

Let’s proceed. I’ll mute myself out for the moment, and let the pictures to the talking. 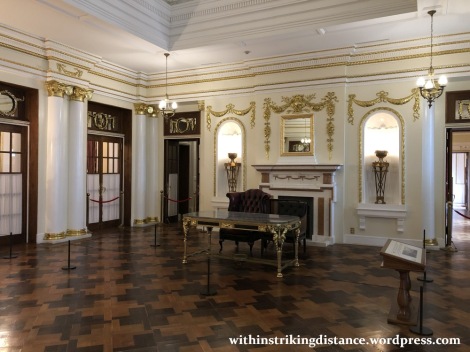 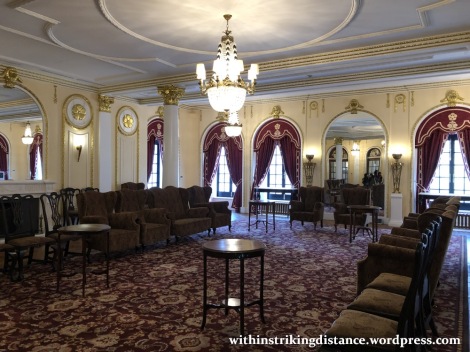 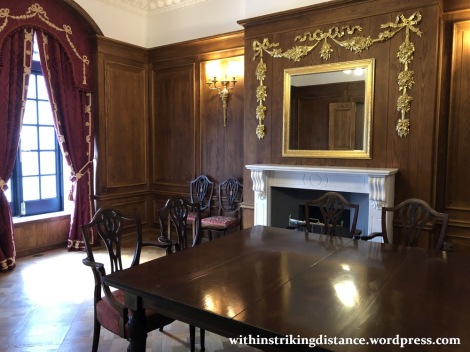 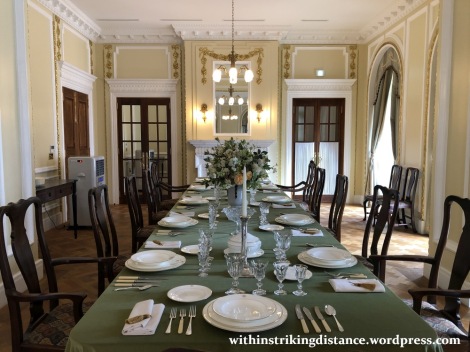 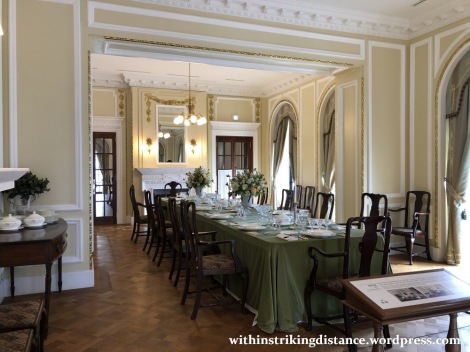 Good stuff. Quite the contrast to the look and feel of Joseon that one encounters in most other Korean palaces.

Side note: look in the right spots around Deoksugung and you’ll notice stones pockmarked with bullet holes. Here we find a sobering reminder of how Seoul was once a battle ground during the Korean War (1950-1953), changing hands several times before being won permanently back by the UN-backed South.

After a relaxed stroll across the grounds, I popped out of the main gate … but didn’t stray far. The area around Deoksugung was once teeming with foreign legations – some of which still have a presence here – and there’s quite a bit of history to discover if one can spare the time for a leisurely walk.