We’ve taken a detailed look at the departures zone of Ninoy Aquino International Airport’s Terminal 1 through one of my previous Terminal Reports. Today, we’ll go down and experience the terminal from the perspective of an arriving passenger.

Note: For the sake of brevity, I shall refer to Ninoy Aquino International Airport (“MNL”) throughout this post using its three-letter IATA code. Terminal 1 will likewise be referred to in abbreviated fashion (“T1”).

The coverage of this post is limited to the arrivals area of MNL T1. To learn more about the departures zone and the facilities available there, please refer to my previous T1 terminal report.

This report draws mainly upon my own experience as a passenger arriving at T1, and I intend to update the information presented here after each flight. Facilities and other details may change at any time without prior notice.

IMPORTANT NOTICE!: This Airport Guide has NOT been updated to reflect changes brought about by the ongoing global health emergency. Because my last visit to MNL took place just before pandemic-related restrictions were rolled out, and because of the very fluid situation around travel bans and border checks related to the emergency, I shall make no attempt to describe the changes here. Please refer to the official websites and/or verified social media channels of your origin and destination airports, your airline, the relevant government agencies, and other reliable sources to collect up-to-date information that’s accurate for your specific circumstances.

Since my original MNL T1 report (which covers the departures level) already includes a detailed overview of the airport, I’ve decided to omit the usual introductory sections with their statistics, links, transport options and so on. Let’s jump straight into things and see what arriving passengers can expect from this terminal.

PART 1: FROM THE AIRCRAFT TO IMMIGRATION

T1’s antiquated aerobridges are progressively being modernised, with older metal-walled boxes giving way to glass-and-steel corridors similar to the one shown below. 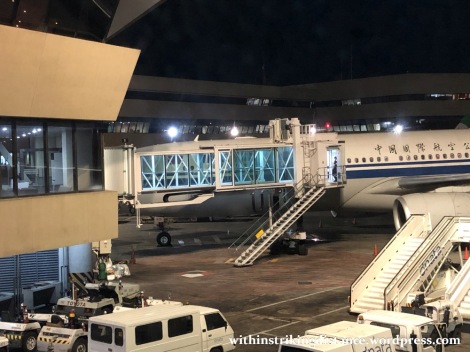 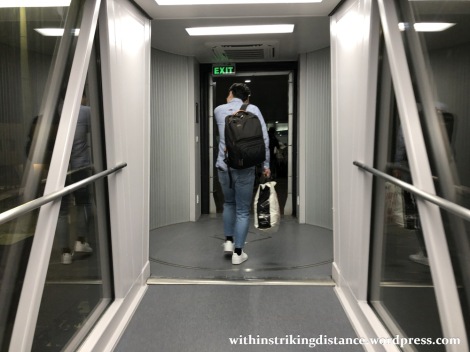 Until that project’s completed, you might still pass through a windowless tube on your next T1 arrival.

Most of T1’s gates are grouped around the building’s two concourses like spokes around a hub. If your aeroplane docks at one of these, you’ll initially step out into the narrow corridor that runs along the edge of the concourse. (The waiting area for departing passengers is on the other side of the glass wall.) 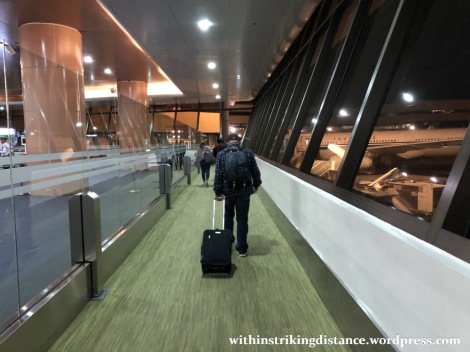 Follow the corridor until you reach the wider passageway that runs along the full length of T1’s “arms”. If your flight employs one of the side gates (2 and 7 in the eastern arm, 9 and 15 in the west), your walk to immigration will be a bit shorter as the path from the aircraft leads straight into this passageway.

I should point out that MNL T1 isn’t equipped with travelators, whether upstairs in the departures area or down here in arrivals. This might present a problem for people with mobility issues, but wheelchair services are available for those requiring assistance. As for passengers of normal ability, T1 is a relatively compact structure so navigating the entire building on foot shouldn’t pose much of a challenge.

Now if your aircraft parks at gate 1 or 16 – congratulations! Both gates are right next to the immigration zone.

MNL T1 has a limited number of immigration desks. Anticipate a bit of queuing at peak times.

Some of the queues for Philippine passport holders lead to so-called “e-gates” – automated border control checkpoints, similar to Australia’s SmartGates or the UK’s ePassport Gates – which are set up to screen returning citizens and allow them through without human intervention. The e-gates can only be used by travellers holding chip-equipped Philippine biometric passports; foreign passport holders can’t use them.

Here’s a clip from a local news channel (note: the commentary is in Tagalog) describing how to use the e-gates. The e-gates shown here are in MNL’s Terminal 3, but I know from direct experience that they’re virtually identical to the ones installed at T1.

Note that at the end of the process, the machine will issue an arrival sticker for you to affix to your passport; don’t forget to take it from the printer slot!

Unfortunately, the ill-designed signage and poorly organised queues can give rise to a fair bit of confusion. I’ve seen foreigners joining the queues for locals by mistake, realising their error after a considerable period of time, and then shuffling back all the way to the end of the foreign passport lines. It’s also hard for me to understand why the authorities haven’t employed snaking queues to better manage passenger flow (as I’ve seen at other airports), relying instead on straight lanes that don’t efficiently ration counter demand.

After immigration, you’ll find yourself in the baggage reclaim hall.

The carousels are of an older type with sloped surfaces. Bags are disgorged onto the carousel from a belt that rises out of the centre island. Be warned that items of luggage tend to take a bit of a tumble as they slide from the rubber belt onto the metal conveyor.

Nothing special about the customs barrier or the form to fill out – unless you’ve got goods to declare – so let’s sail on through.

To be perfectly frank, the arrivals lobby doesn’t have much going for it. A small assortment of service booths, but no shops or cafés. There are a few seats available near the ATMs at one end of the hall (not sure if the opposite end also has seats), but other than that, there’s no place here to park yourself in for an extended period of time. 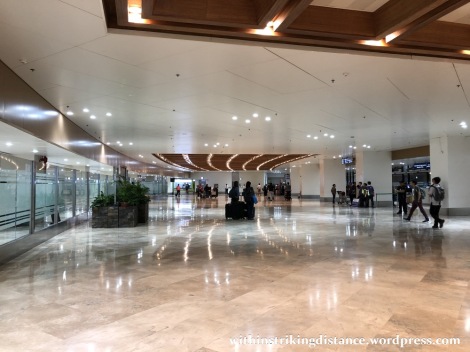 Right outside the arrivals lobby is a sheltered road where you can hire a taxi. Note that the yellow airport taxis – which require special licences to operate at MNL’s terminals – will cost a bit more than the white regular taxis you’ll see on the streets of Manila. 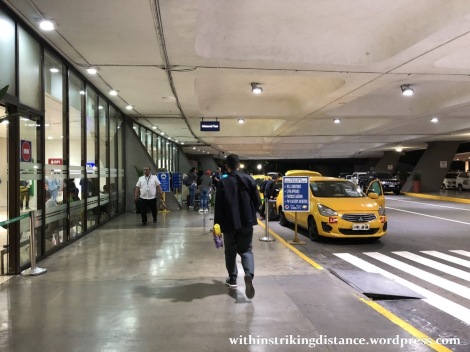 However, if you’re being fetched by a private vehicle, you’ll need to cross that road and descend by a broad ramp to the so-called “arrivals extension”: a roofed waiting area near T1’s parking lot, with its own access road parallel to the one we saw earlier (but on a lower level). I’ve tended to use airport taxis of late and haven’t been down there for a good long while, so let’s leave Google Street View to illustrate the scene.

I must stress again that I haven’t used the arrivals extension recently, and it’s possible that conditions have improved since the last time I was there. That said, I distinctly remember it being a rather dirty, poorly maintained, and horribly congested place (at least during peak times). Manage your expectations accordingly – and keep all valuables secure before wading into the teeming crowd!