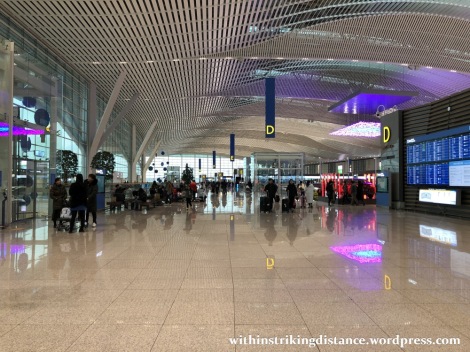 I’ve used Incheon International Airport (ICN) many times when flying to or out of Korea. However, until a few weeks ago, all of the airlines I’ve travelled with were assigned to Terminal 1. This year, I gave my business to flag carrier Korean Air (KE) for the very first time, which in turn gave me my first opportunity to use their shiny new hub: ICN’s Terminal 2 (T2).

Note: For the sake of brevity, I shall refer to Incheon International Airport (“ICN”) throughout this post using its three-letter IATA code. Terminal 2 will likewise be referred to in abbreviated fashion (“T2”).

The coverage of this report is limited to the departures area of ICN T2. T2’s arrivals zone and ICN T1 will not be described in detail.

The information presented here is based on my own experience of using T2 for a flight that departed on 06 February 2019, with occasional reference to another recent flight boarded from there on 01 February. Facilities, check-in procedures, flight schedules and other details may change at any time without prior notice.

The visit described in this report is actually my second time at ICN T2. I used the terminal for the very first time just a few days earlier, whilst transferring flights – click here to read my report on that experience.

ICN is well served by both rail and road-based transport. The available options are outlined on the Public Transport page of their official website.

Click here to read a report I’ve written about the fastest railway option: the A’REX Express Train of the Airport Railroad line. This non-stop service takes about 51 minutes to cover the distance between T2 and Seoul Station.

If you’ve used T1 before, you’ll notice a whiff of familiarity about the layout of T2, with a railway station linked to the passenger terminal by a long series of escalators and walkways. 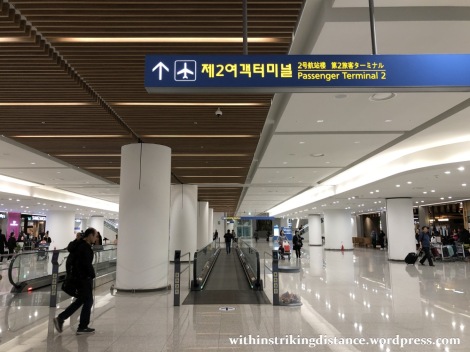 Having completed the long hike up from the train platforms or bus stops, you’ll find yourself standing in T2’s cavernous main hall.

Let’s have a look at one of the flight information displays. Observe how some flights – especially those operated directly by Korean Air (IATA code: KE) – make use of multiple counter zones across the main hall, rather than being assigned to a single zone.

The diagrams below the flight information display panel explain this rather odd set-up. Whilst most airlines are only assigned a single set of counters, KE (as the main tenant of T2) makes use of several zones, each assigned to a specific type of passenger. For example, First Class and Prestige (Business) Class passengers travelling with KE are entitled to use the premium counters at zone A, whereas Economy Class passengers must trundle themselves over to G. 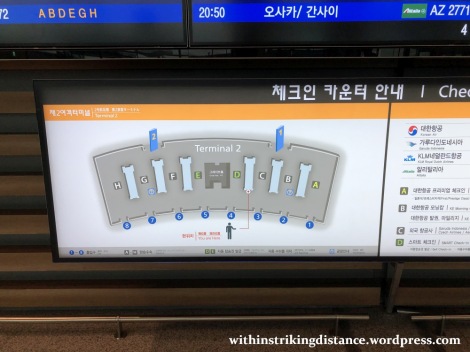 There are unmanned “Smart Check-in” counters in the middle of the vast hall, equipped with self check-in kiosks and bag drop machines. 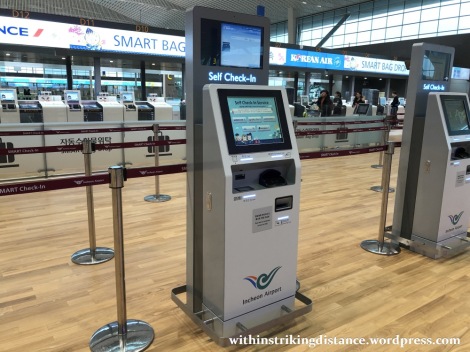 Further details on conventional counter-based check-in, self check-in/bag-drop facilities, and internet check-in are available on the ICN official site.

As for myself, I avoided all of this complexity – and relieved myself of luggage earlier than usual – by making use of a fourth option: one of the Greater Seoul area’s three City Airport Terminals (CATs). These facilities enable passengers on select airlines to check into their flights and deposit baggage before they even leave the city. The branch I used on this occasion is the CAT at Seoul Station; click here to read more about the experience. 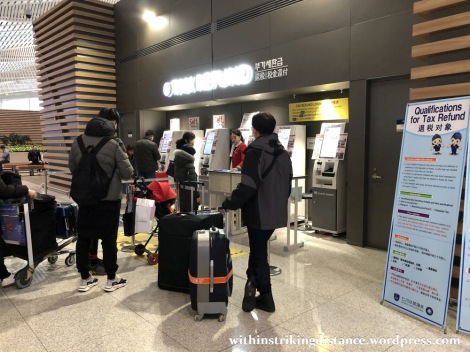 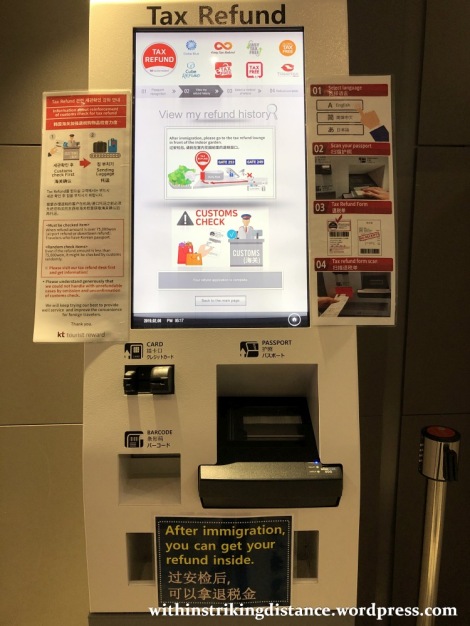 There are two main entry points leading to T2’s security zone and immigration counters. Only passengers are allowed through the doors into the secure area of the terminal.

If you’ve already completed check-in and immigration procedures at one of the offsite CATs, a special stamp applied by the CAT staff on your boarding pass entitles you to use a smaller, separate entrance normally reserved for flight crew and diplomats.

After the usual checks, we’ll find ourselves standing in T2’s vast…

In Terminal Reports covering smaller facilities, this is where I’d usually set out a detailed walk-through, identifying the shops and dining establishments that departing passengers can make use of.

But here’s the rub: ICN T2 is so huge, and the choices for shopping and eating so incredibly varied, that any attempt on my part to list out the available options would be an exercise in futility. All I can offer is a link to the official site where all the relevant information is available…

…and a trimmed-down gallery of images to show what it’s like inside this cavernous structure. 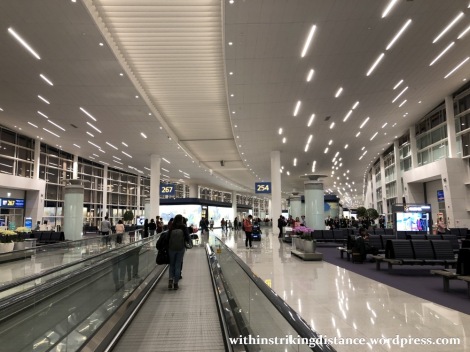 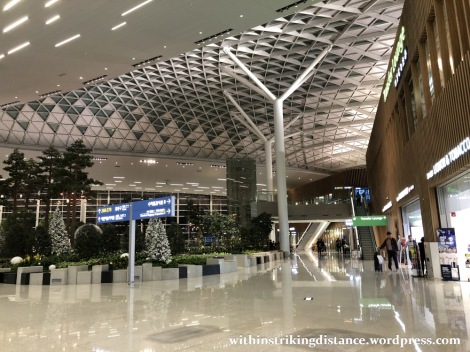 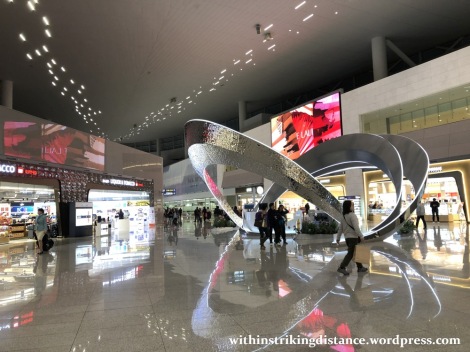 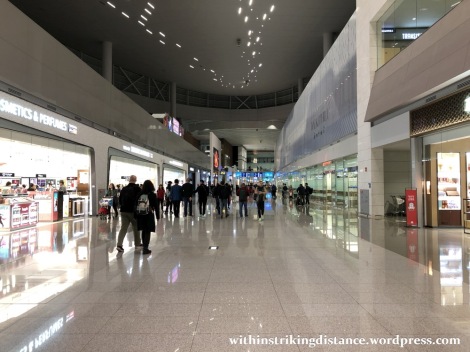 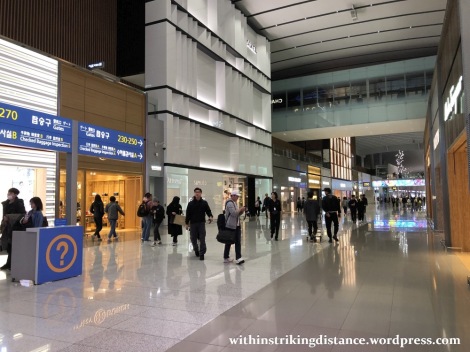 Now then, let’s zero in on a couple of facilities that may be of special interest to airport users. First up is a tax refund centre – one of two (that I’m aware of) in the airside zone – where passengers can recover tariffs paid on duty-free purchases made outside the airport. 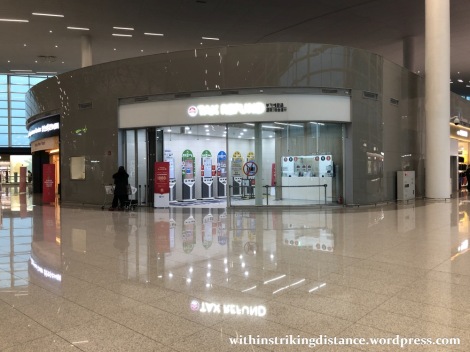 There are options for receiving electronic credits or even foreign currency. In my case, I was entitled to a small reimbursement of KRW 5,000 from an eligible hotel stay and elected to receive it in local currency (more cash for the stash of pocket money I’m maintaining for my regular visits to Korea).

Another facility worth mentioning: the free showers in the Transfer Lounge area. 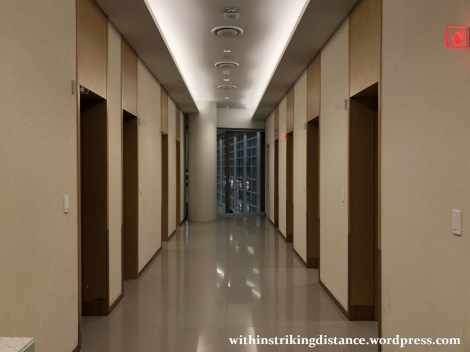 Here’s what a typical shower room looks like on the inside (pictures taken during my transit through T2 a few days earlier).

I might also write a separate review covering one particular T2 restaurant. If that post ever gets written, I’ll add a link to it here.

Now then, let’s get ready to board. The gate assigned for the use of my Manila-bound flight, KE 649, was Gate 252. 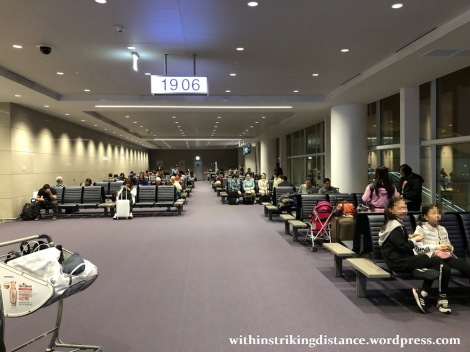 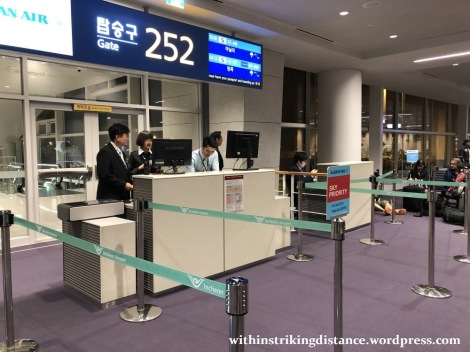 Shame about the delay, but I could think of worse places to be detained in than ICN T2.

That would probably be any airport terminal other than ICN T2 (haha).

Gate 252 was a typical ICN aircraft pier, equipped with double aerobridges. In the end, we were using a small aircraft so only one was deployed.

Compare this with the gate I used to board my ICN-PUS transit flight a few days earlier, number 238, with just one aerobridge. I’ve also seen (on satellite views of T2) a number of larger gates with THREE aerobridges; one assumes that flights served by super-massive A380 aircraft would make use of those.

I’ve long regarded ICN’s older T1 as one of the best airport terminals I’ve ever had the pleasure of departing from. Inheriting the convenient transport links of the wider ICN compound, and adding its own signature flourishes, the new T2 improves on its elder sibling’s well-deserved reputation with a vast range of shopping and dining options (as well as support facilities such as rest areas and free showers).

I certainly wouldn’t mind taking a flight from this terminal again in the future.