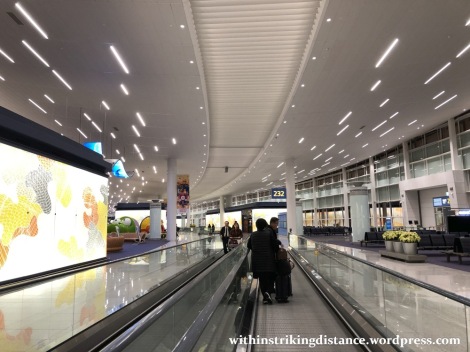 Just a trimmed-down report for today, covering my recent experience of transferring between flights at Terminal 2 of Incheon International Airport (ICN).

Note: For the sake of brevity, I shall refer to Incheon International Airport (“ICN”) throughout this post using its three-letter IATA code. Terminal 2 will likewise be referred to in abbreviated fashion (“T2”).

The information presented here is based on my own experience of transiting at T2 on 02 February 2019. Facilities, transfer procedures, flight schedules and other details may change at any time without prior notice.

To keep things short and sweet, I’ll focus on describing my layover experience as it actually happened. I won’t delve too deeply into the process or explore all possible variations (like transfers involving a change of terminals). For detailed instructions, please refer to the Transfer Information page of ICN’s official website.

Briefly, my transfer is within the same terminal (T2) between two flights operated by the same airline, Korean Air (IATA code: KE). Although technically domestic, KE 1401 – like the rest of the very few intra-Korean flights operating at ICN – is a so-called “Transit Exclusive Domestic Flight”, reserved solely for the use of passengers transferring from overseas to Busan or Daegu. These services are operated as international flights, not domestic, with immigration and customs formalities handled at the final destination within Korea (not here in ICN).

PART 1: FROM THE AIRCRAFT TO THE TERMINAL

After arriving at ICN T2 on KE 624 – click here to read my detailed report about that flight – I simply followed the green “Transfer” signs until I reached the transit zone.

…but I already had mine (issued at MNL), so I simply followed the red arrow over to the security checkpoint. 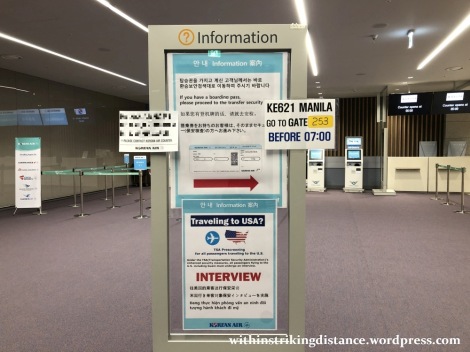 Before long, I was through the doors and ready to go up to the main departures level of ICN’s gleaming new T2.

Now then, a good freshening up to prepare for the day ahead. I made my way to the so-called Transfer Lounge: a special area with facilities designed to ease the pain of a long layover. A place to nap, a place to buy food…

…and a place to take a shower.

Alas, they’d run out of clean towels. Plenty of used towels in the laundry bin, of course … but I’m not that desperate. 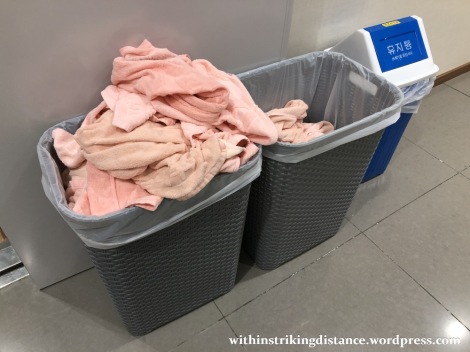 With no staff members on hand to ask for assistance (early morning and all that), I settled on a limited wash-up rather than a full shower, using a spare shirt as a makeshift towel.

Right, let’s get those morning rituals over with. 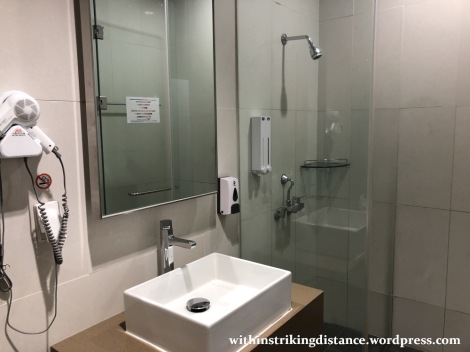 That done, I wandered back down to the main departures level for a good look round. Still fairly quiet at this hour with most establishments closed, but there were enough round-the-clock or early-opening options (at least for food) to offer a reasonable variety. 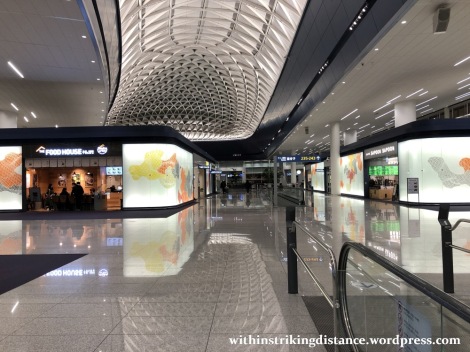 Some parts of this terminal might as well be called the Hanging Gardens of Incheon, in view of the mini-forests and terraced landscapes they’ve ornamented the cavernous interiors with.

Now for a simple café breakfast – my first meal on the ground for this Korean holiday. On the tray: a mozzarella focaccia sandwich (5,800 won) and some frothy iced Americcino (6,000 won), at Angel-in-us Coffee. 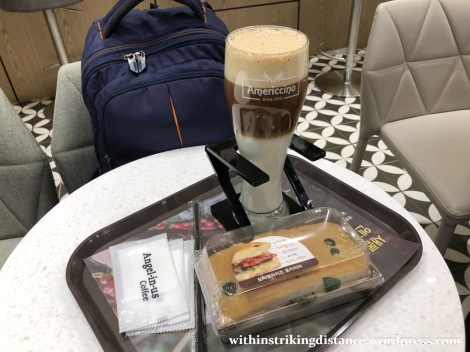 There’s a good variety of seating options in T2 if one knows where to look, especially up in the Transfer Lounge. Down near the boarding gates, it’s a fairly uniform array of cushioned airport benches. (Note the USB charging ports and Korean-style power outlet.)

As the appointed time drew near, I positioned myself closer to the assigned boarding point for flight KE 1401. Number 238 was one of the smaller gates at T2, equipped with a single aerobridge rather than the usual pair, but we were only using a narrow-body aircraft so it was more than adequate for the job.

And that was that. Easy and painless, as one might expect from an airport that ranks amongst the best in the world.