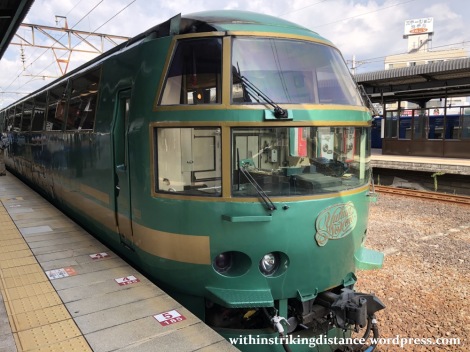 Think of Japanese trains, and the high-speed shinkansen will probably come to mind before anything else. But some of my favourite journeys were on much slower rolling stock, like the service that brought me from the onsen town of Beppu to the bustling centre of Fukuoka in nearly three and a half hours.

Welcome aboard the Yufuin no Mori.

The Yufuin no Mori isn’t the fastest means of travelling between these two points. Earlier that same day, a Sonic limited express service brought me from Fukuoka to Beppu in just 2 hours and 10 minutes. Of course, I should also point out that the Sonic‘s modern, utilitarian passenger compartments were designed with the regular business commuter in mind, rather than the leisure traveller. If it’s old-fashioned charm and elegance you’re after, go with the Yufuin no Mori; if it’s speed and efficiency, the Sonic may be the better option.

There’s another limited express service called the Yufu that plies the same route, but is perhaps the least desirable of all, with neither the luxurious atmosphere of the Yufuin no Mori nor the modern comfort and haste of the Sonic. Unless the Yufu‘s schedule best fits your itinerary, and/or the Yufuin no Mori isn’t running (in which case additional Yufu services are put on), it’s probably best to avoid this option.

Detailed route information and schedules are available on the JR Kyūshū website.

Although three round trips out of Hakata are normally operated on days when the Yufuin no Mori is running, only one of these goes all the way to Beppu and back. The other two terminate a couple of stops earlier – at the train’s namesake town of Yufuin – before returning to Hakata.

As of this writing, a one-way ticket between Beppu Station and Fukuoka’s Hakata Station on the Yufuin no Mori costs JPY 5,890. Seasonal fare adjustments might put on (or shave off) a few hundred yen.

Do bear in mind that seat reservations are mandatory on all Yufuin no Mori services, so it’s important to secure a reserved seat ticket ahead of departure (even if you’re using a rail pass that covers this train).

The Yufuin no Mori is operated using two custom-built, diesel-powered trainsets. The one I boarded for today’s journey was the older of the pair: a 4-car KiHa 71 series DMU, which started plying the route in 1989.

Despite being three decades old in its current form – and with major parts of its infrastructure reused from even older vehicles – the KiHa 71 still makes quite the impression on those about to board her.

The best part is what’s inside, of course … but we’ll save that for later.

The newer trainset, a 5-car KiHa 72 Series DMU, first entered service in 1999. Although externally similar to the KiHa 71, the 72 is fitted with contemporary interiors and lacks the soaring lounge space found in the older 71. There’s a full virtual tour (set up as a Google Street View walkthrough) on the JR Kyūshū official website if you’d like to have a peek inside the newer train.

Normally, the KiHa 71 is used on the full-route Yufuin no Mori service numbers 3 (Hakata to Beppu) and 4 (Beppu to Hakata), whilst the KiHa 72 is employed on the shorter round trips between Hakata and Yufuin.

INTERIORS, SEATING, AND ONBOARD EXPERIENCE

Now then, let’s get ourselves on board the KiHa 71 that will take us to Fukuoka.

The area near the doors is equipped with the usual facilities: toilets, multi-purpose room, and a small sitting area (used as luggage space with the bench folded up). 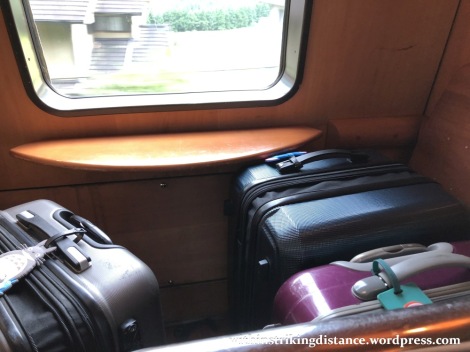 As befits a leisure train, even the toilets are decorated with a splash of art.

Although the KiHa 71 essentially has just one level, its height is almost that of a double-deck vehicle, with the floors of the passenger compartments (along with the seats mounted upon them) set up much higher than on a regular train. The intention, no doubt, is to give passengers a loftier viewpoint from which to enjoy the scenery.

And here’s my assigned compartment, in Car 3. The seats are fairly typical of long-distance Japanese limited express trains, but the decorative accents – brass luggage racks, metal-framed lighting, patterned curtains, polished wooden floors – add a touch of luxury and old-fashioned charm that one won’t find on an ordinary commuter service. 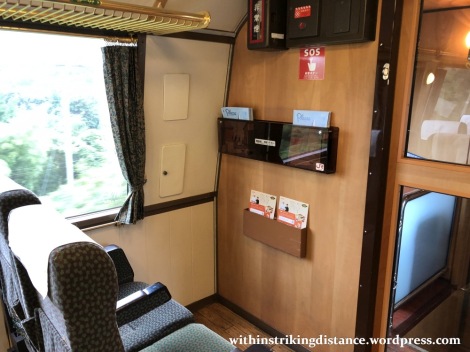 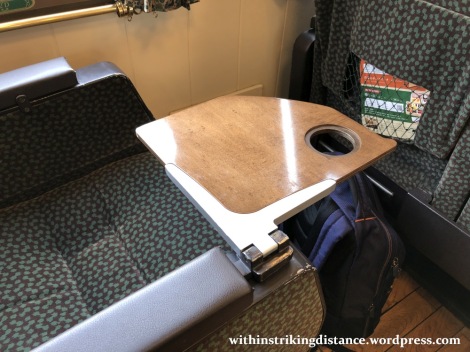 My seat, 2-D, was a solo chair all the way in the rear of the carriage. As a mildly antisocial traveller, I certainly appreciated being assigned this little haven of peace and relative isolation, as far removed from the other passengers as is possible on this train (apart from, say, locking oneself up in the toilet). 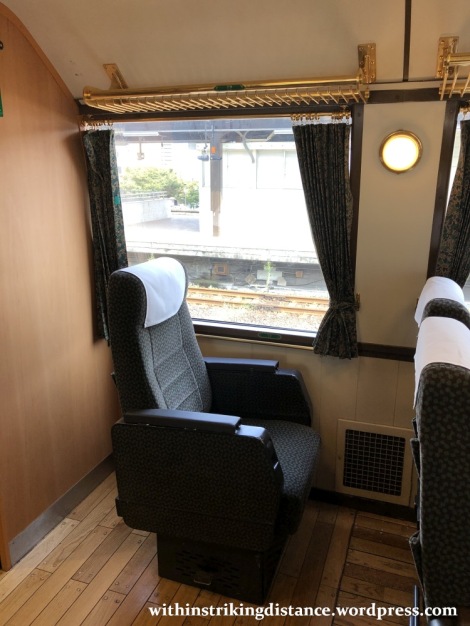 Angry Usagi (my travel mascot) seems just as pleased as I was with the private setting of this corner seat.

Comfortable surroundings indeed – but this isn’t the highlight of the train. For that, we’ll need to head just a little further aft.

Walking past a set of luggage racks…

…I emerged onto a small balcony overlooking a high-ceilinged lounge, fitted with massive windows and outward-facing wooden benches. The seats in this soaring space aren’t assigned, and are available for use by any passenger on a first-come-first-served basis. 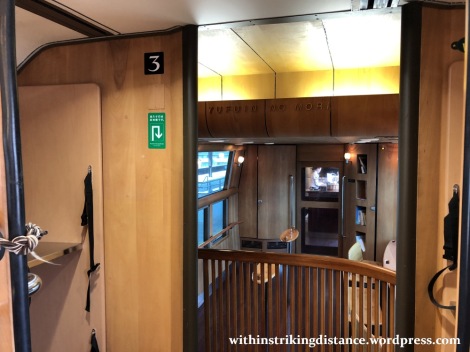 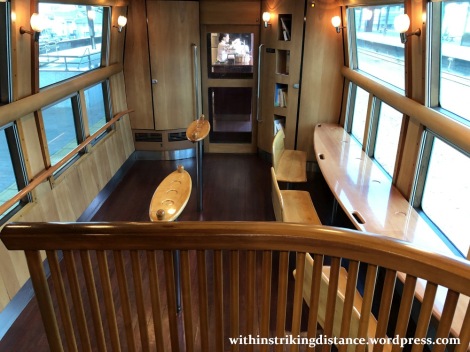 Further aft of the lounge is the buffet car, set up as a little café where food and beverages (as well as souvenirs) can be purchased. 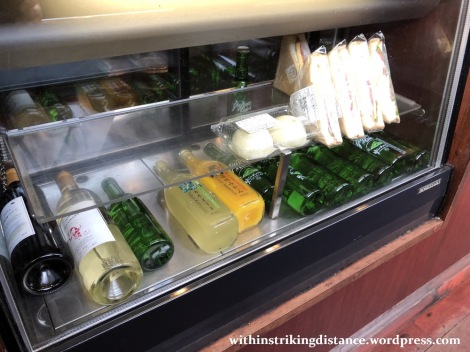 Alongside the usual sandwiches and light snacks, there’s a small selection of bentō on offer for those hoping to tuck into something more substantial. 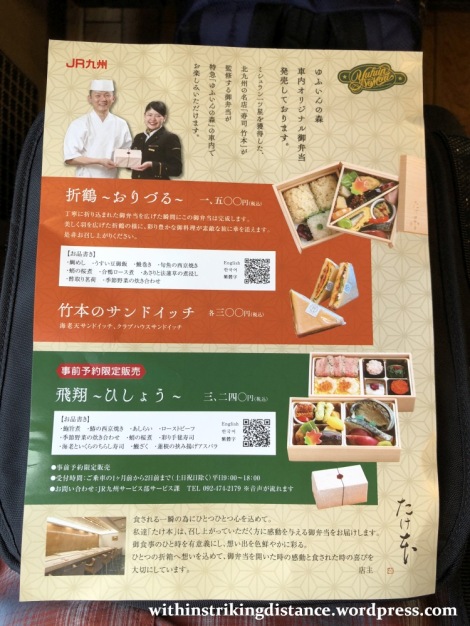 A complimentary sweet will be offered to you at your seat. It’s not much, but hey, I’m not one to turn down a freebie.

The Yufuin no Mori might be a rather slow means of getting from Fukuoka to Beppu and back … but what it lacks in speed, it more than makes up for in terms of luxury and comfort. And with surroundings as lovely as these – both inside the train and outside, with the magnificent countryside of northern Kyūshū rolling gently past the large picture windows – I’d actually appreciate more time on the rails in order to better enjoy the journey.

If my sightseeing schedule leaves time to spare for a leisurely commute, would I board this train again? Gladly.