Fukuoka Airport (FUK) is by far the busiest international gateway on Kyūshū, and one of the busiest in Japan. Even so, it’s hard to believe how close this airport is to the city it serves, with the downtown area just a short bus or train ride away. Today, we’ll see if using the international terminal is just as smooth and easy as getting there in the first place.

Note: This report specifically deals with international departures from FUK. The terminal’s international arrivals zone and separate domestic terminal are not covered here in detail.

The information presented here is current as of the day I used the airport (26 September 2018). Details may change at any time and without prior notice.

FUK is served by good road and rail links that connect its terminals to downtown Fukuoka, as well as destinations further afield. The Ground Transportation page on the airport’s official website has a useful summary of the available options.

If you’re travelling between the international terminal and Hakata Station – Fukuoka’s main transportation hub and a key stop on Japan’s high-speed shinkansen network – the most direct option would be to take a local bus, as this would require no transfers. That said, going by rail is also a convenient alternative, as I’ll explain here.

The airport is served by Fukuoka-kūkō Station, the eastern terminus of the Fukuoka City Subway’s Kūkō Line. A one-way journey there from Hakata Station takes just 5 minutes and costs 260 yen.

Now here’s the rub: Fukuoka-kūkō Station is located underneath the domestic terminal, which lies all the way across the tarmac and runway from the international terminal.

Not to worry: there’s a free shuttle bus service that connects the two terminals, departing from near the station exit every few minutes from about 0600 till late in the evening (timetable here). It takes approximately 10 minutes for the bus to go from domestic to international, and about 15 minutes in the opposite direction.

After stepping through the subway faregates, you’ll see a sign marked Exit 1A, which points towards a corridor with escalators at the end. 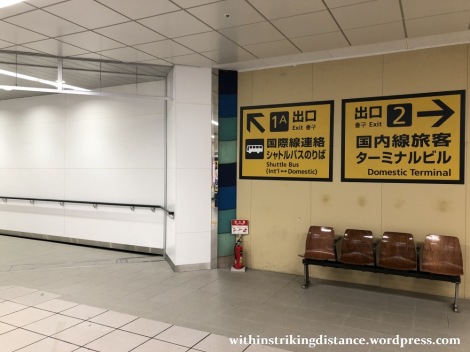 Go up the escalators to street level, then keep walking along the pavement until you see the shuttle bus stop. 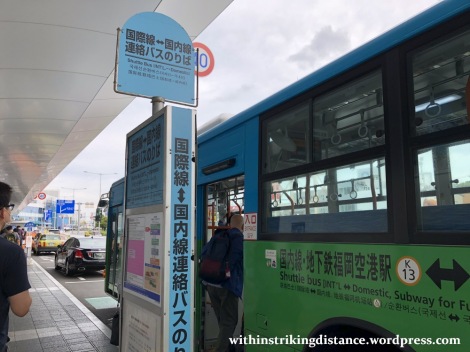 Board the bus and ride it all the way to the last stop, the International Terminal building. (Note that there are two intermediate stops, one at the north area of the Domestic Terminal and one at the Cargo Terminal.)

Further details on the subway option are available on the airport’s official website.

Now then, let’s work our way up and check in for the flight ahead.

The shuttle bus stop is right outside the arrivals lobby on 1F. Most of the services here are geared towards arriving passengers: tourist information, mobile phone rental kiosks and so on. There’s also a 7-Eleven convenience store (south end) and a Yoshinoya gyūdon restaurant (north end) if you’re in need of basic supplies or a quick meal.

Let’s go up one level now.

A good chunk of this floor is occupied by the arrivals immigration desks, which are out of view and inaccessible to us. What we can access is an intermediate lobby with toilets and waiting rooms.

One more level up, then.

And here we are – the check-in lobby. This is usually the showpiece hall in a typical airport terminal, and FUK’s certainly got something to show here. 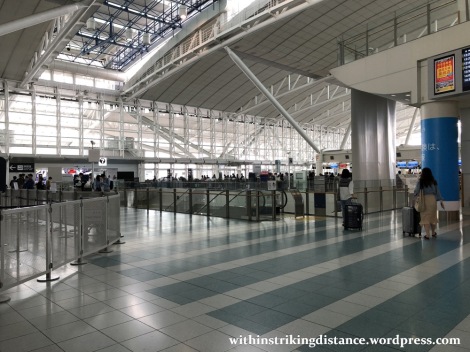 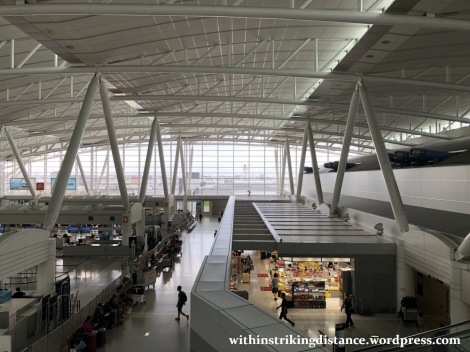 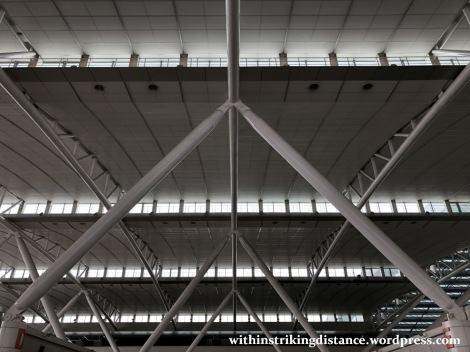 There’s seating available along the outer edge of the check-in lobby, as well as near the shops further in. 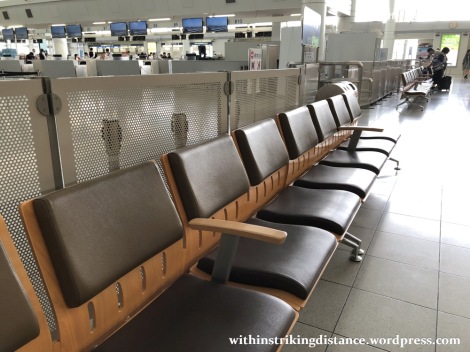 Much of the floor space is occupied by the check-in counters, about which we’ll have more to say later (when we go through the check-in procedures). To the rear of those are shops and service kiosks…

…but not restaurants. Now if you’re hungry, all you need to do is look for this sign…

…and take the escalators or lifts up to the top level of the building.

There are four dining establishments on this floor, all Japanese-style to varying degrees. The closest to a Western option is the “ROYAL Food Court”, although the menu is more along the lines of yōshoku (Western-style Japanese cooking) than true Western cuisine – curry rice, for example.

There are toilets on the north side of 4F, and an observation deck at the far end.

The south side also has toilets and an observation deck, as well as a smoking room and a prayer room. 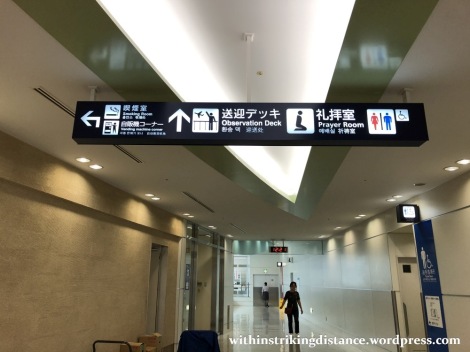 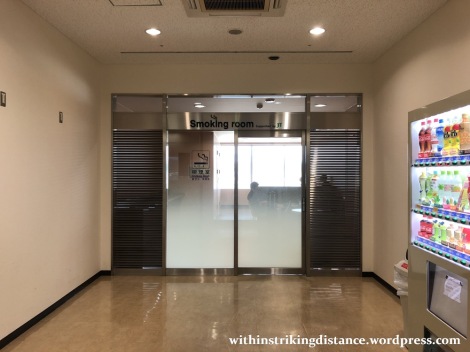 Right, I think we’re ready to check in. Let’s head back down to 3F and complete the formalities.

The main hall is divided into two halves. Each half has three islands, and each island has two banks of check-in counters. Note the white metal barrier set up around the counter area – we’ll get back to that shortly.

The flight information boards will not only state the check-in counter letter for your flight, but they’ll also show the entrance number you’ll need to use in order to cross the barrier. 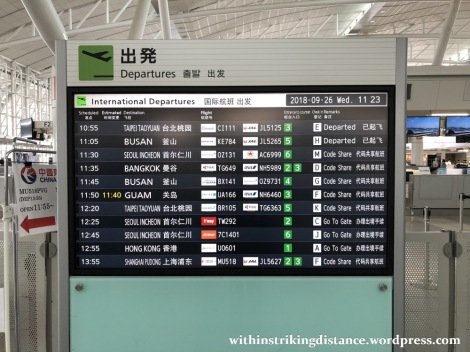 Look for the entrance number and join the queue. Bear in mind that more than one flight might be using the same entrance at about the same time: check the signs and make sure that you’re in the correct queue for your airline. 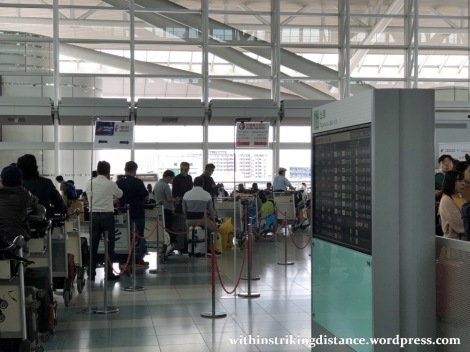 The reason for the barrier we saw earlier is that there’s an initial security screening prior to check-in. Not for passengers or carry-on luggage, but for checked luggage. When you reach a scanner like the one in the next picture…

…you’ll be asked to put your checked luggage – and ONLY your checked luggage – on the belt for inspection. (Keep carry-on baggage on your person.) If I’m not mistaken, this procedure is designed to weed out dangerous items even before bags are checked in, with a particular emphasis on electronic items as batteries are not permitted in the aircraft hold. Once your bag is cleared, a sticker will be placed across the lock or zipper to indicate that it’s good to go. Be careful not to break the security seal after this point, or your luggage might have to be put through inspection again.

With that over, you’re free to approach the check-in counters and proceed as normal. In the case of my flight with Philippine Airlines, dedicated lanes were made available for Business Class passengers and those who’ve already checked in online. (Other airlines might employ different counter arrangements.)

There are self-check-in kiosks available in the departures hall, outside the counter barriers. Whether this option is available to passengers will depend on the airline.

Next stop: security and immigration. Nothing out of the ordinary here, but do expect some queuing at peak times.

If you’ve made any duty free purchases during your stay in Japan, there’s a customs counter between security and immigration where you can turn in the receipts stapled to your passport.

Let’s have a look at the shops and services available in the boarding area.

Right smack in the middle is the main duty free zone. 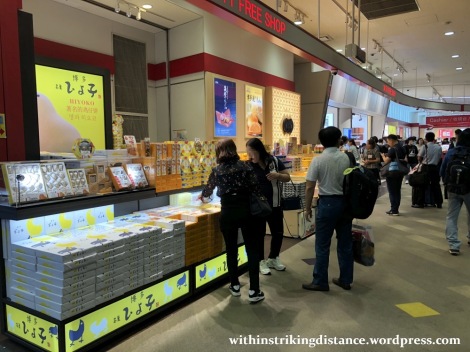 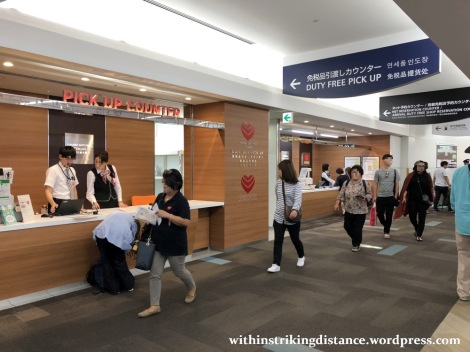 …as well as the usual host of services, including a currency exchange booth. 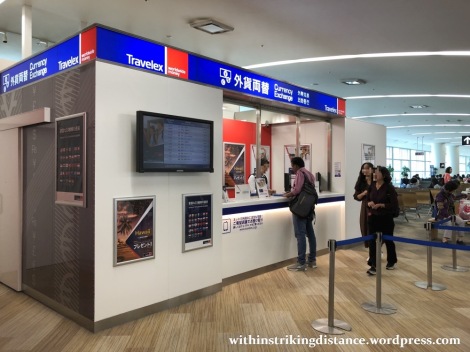 The toilets and smoking room are at the far end. Along the way are a couple of food options and the entrance to two lounges.

Let’s head north now, or left if coming from immigration. 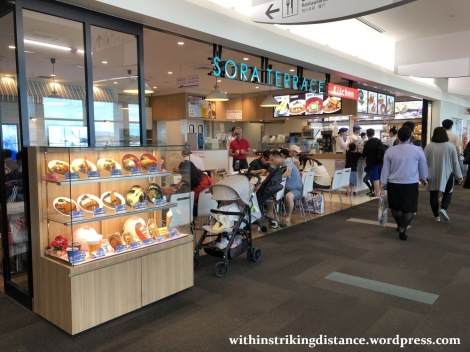 The duty free shops near the northern end are much smaller than the big ones near the middle, but (at least at the time of my flight) are also far less crowded. If you’re keen to stock up on goodies to take home but aren’t keen on queues, these might be a better option. 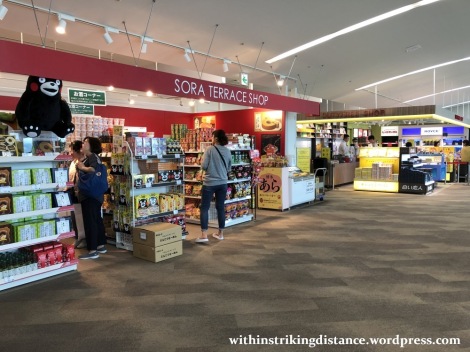 There’s also a lounge on this side, as well as a smoking room.

If you’re game for a bit of exploration, keep heading north and you’ll see the entrance to Gates 50-52 and 60, which are bus gates located all the way down on 1F. Apparently there’s also a bar-plus-shop on that level.

All the way at the northern tip is a so-called “Kids Corner” – just a padded play pen, really.

All right, we’ve had a good look at the place. Let’s turn around and move towards Gate 55 (the one I used for my flight)…

…and look for a place to sit. There’s a range of options where that’s concerned: tables and chairs, padded platforms, benches, and so on. 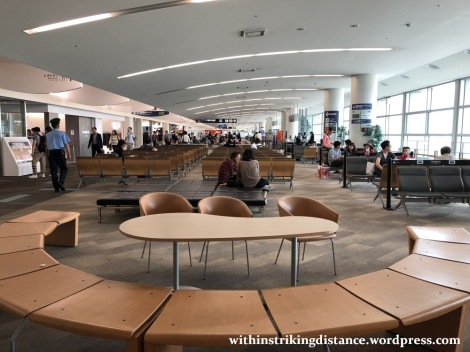 If your devices are running low on power, look for the black seats equipped with power points (both conventional plug-type outlets and USB charging ports are fitted). 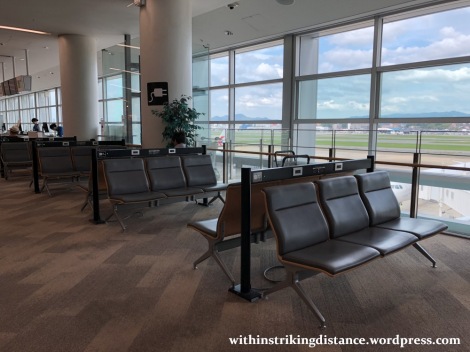 Now for a quick look at the gate. Fairly typical set-up: a counter for checking boarding passes, an escalator leading down to the boarding bridge, and then an aerobridge into the plane itself. 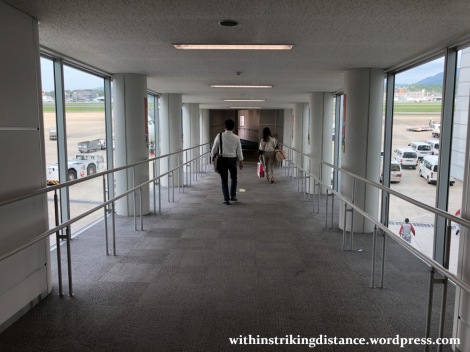 Fukuoka Airport enjoys an enviable location close to the city it serves, with the urban centre and the area’s main railway hub mere minutes away. The international terminal is quite compact, but it’s well run and well maintained, with a decent range of shopping and dining options available.

On the whole, I found the experience more than satisfactory, and I’d be happy to use this gateway again if it dovetails with my future travel plans (such as for holidays focused on Kyūshū or western Honshū).