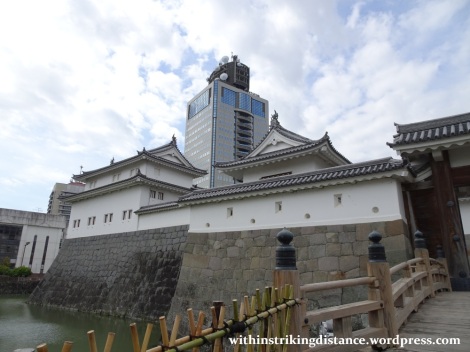 Think about the sort of house you’d like to live in after retirement. Will it be a beach-side bungalow, or perhaps a small cottage out in the country? Whatever form your post-employment residential dream might take, it’s not likely to be on quite the same scale as the sprawling fortress that Tokugawa Ieyasu moved into after he’d quit his plum government job in Edo and decamped to what is now Shizuoka Prefecture.

At Tōkyō Station, I boarded the Tōkaidō Shinkansen Kodama 643 service bound for Nagoya. Ahh, Nagoya: one of my favourite cities in Japan … but NOT my target on this occasion. Less than an hour and a half after our 09:26 departure, I got off the train at Shizuoka (静岡): a city of 700,000 people and capital of the eponymous prefecture.

The skies were lightly overcast that morning, and the occasional splash of rain made me thankful for the umbrella I’d packed into my bag. Nonetheless, conditions were generally good for the 10-15 minute stroll across downtown Shizuoka to my main destination of the day.

The site has had a long history, stretching back to when it was occupied by a fortified residence belonging to the powerful Imagawa clan. That said, Sunpu Castle (駿府城, Sunpu-jō) is perhaps most strongly associated with the warlord Tokugawa Ieyasu (1543–1616), who retired here in the early 1600s after relinquishing the title of shōgun to his son Hidetada. Of course, as one might expect, the great unifier of Japan wasn’t entirely keen on the idea of fading quietly into the night. Until his death, Ieyasu maintained a tight – if somewhat veiled – grip on power, and the so-called “retirement home” constructed for him wasn’t exactly your typical summer-cottage-on-the-seaside.

For a start, it had walls. Big walls. And concentric rings of defence featuring three water-filled moats. I passed a surviving section of the outermost ring…

…as I walked towards the substantially intact second moat, the ninomaru-bori, guarded on one corner by the beautifully reconstructed Tatsumi-yagura (southeast turret) and Higashi-gomon (east gate). Destroyed by fire in 1635, the Higashi-gomon was rebuilt three years later and remained standing until Sunpu Castle was dismantled in the latter half of the 19th century – a casualty, like nearly all other Edo Period castles in Japan, of the Meiji Restoration. The exact replica we see today was based upon the plans drawn up for the 1638 rebuilding. 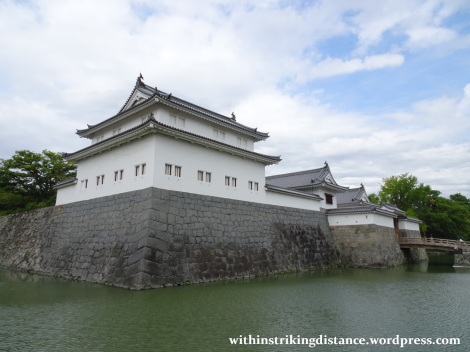 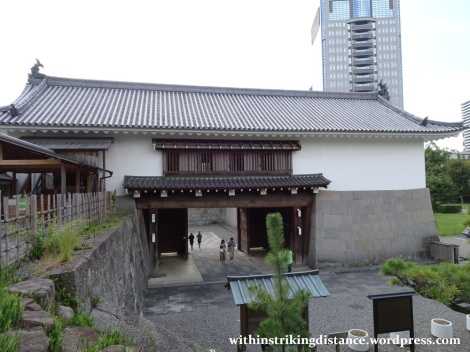 The large gatehouse and adjoining corridors are used as museum space, filled with exhibits and artefacts highlighting Sunpu Castle’s place in history.

Amongst the exhibits, my personal favourite is an incredibly detailed scale model depicting the castle compound as it once appeared during the Edo Period.

Here’s a full shot of the model showing all three enceintes: the sannomaru on the outer edge, the ninomaru in the middle, and the honmaru at the very heart of the complex. 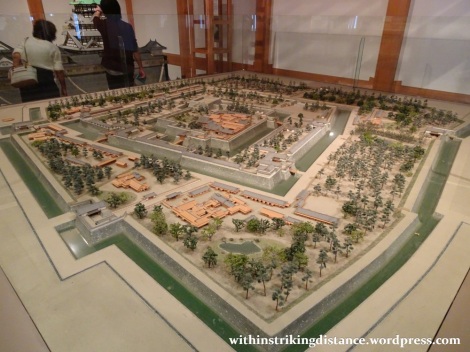 Let’s zoom in a bit closer now for a better look at the ninomaru, the second enclosure. Take a moment to appreciate the Tatsumi-yagura and Higashi-gomon at the lower-right corner, beautifully recreated in miniature – an interesting contrast to the sheer size of the actual building in which this model is housed.

Now for a close-up shot of the honmaru, the innermost enceinte, where one of Ieyasu’s palaces and the castle’s soaring tenshu (main tower) once stood. Note the empty stone-encased platform that formerly supported the tenshu, which was not rebuilt following the disastrous fire of 1635.

To put things in the proper context, here’s a simplified ground plan showing the general layout of Sunpu Castle during the Edo Period. (You’ll have to forgive the rather poor quality of this image – it’s just a crop from a snapshot I took of an outdoor sign on the castle grounds.) The black square slightly above and left of centre marks the site of the main tower.

Speaking of the tenshu, a large scale model in the museum shows what the massive wooden structure might have looked like before it was reduced to ashes. Unlike the main towers of many other Japanese castles built during the same period, Sunpu’s was fixed upon an unusually large base that had sufficient room for a complete ring of defensive turrets and corridors: almost like a self-contained mini-honmaru within the broader honmaru compound. 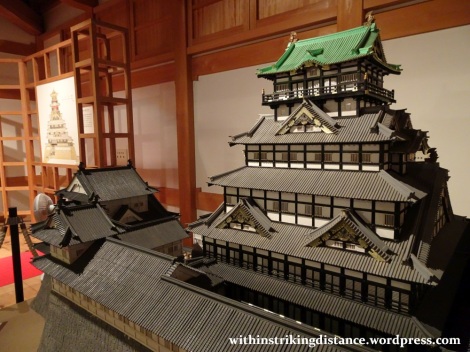 Definitely not your typical retired pensioner’s flat, this.

The gatehouse windows offer an elevated vantage point from which to appreciate the masugata (box-like) enclosure that lies between the Higashi-gomon’s outer and inner portals. This arrangement is a common feature of large Edo Period castles, as it gives the defending garrison a key advantage against enemy forces. A besieging army would have had to breach the smaller, outer entrance…

…before they could even try to penetrate the much larger and more heavily reinforced inner gate, all the while being showered with arrows and firearm volleys (along with rocks and hot oil and whatever else came to hand) from the gatehouse and corridors above.

Unlike many reconstructed castle buildings put up across Japan during the post-WW2 era – assembled in record time using cheap reinforced concrete – this newer replica was erected using authentic materials and techniques. As I’ve observed in some of my previous castle-hunting posts, the recent shift in favour of historically accurate reconstructions is an encouraging trend, not merely for the obvious aesthetic advantages but also because this helps ensure that traditional building skills are handed on to a fresh generation of artisans and craftsmen.

A short distance west of the Higashi-gomon, I came across two rectangular ponds filled with murky green water. These are excavated remnants of Sunpu Castle’s innermost moat, the honmaru-bori, which once completely surrounded the central honmaru enclosure as a last line of defence. In 1896, the honmaru-bori was filled in with earth and rubble from demolished walls, thereby merging the honmaru and ninomaru enceintes – which until then had been separated by the moat – into a single large space that would later become Sunpu Castle Park. 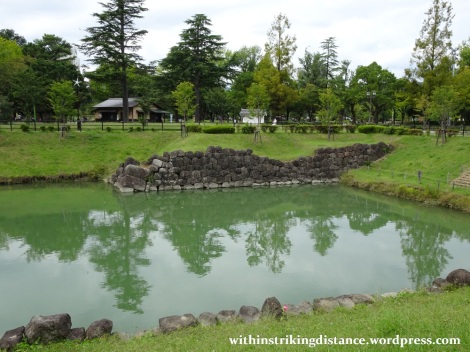 To keep the water level under control, the castle builders dug a canal connecting the honmaru-bori to the larger ninomaru-bori. 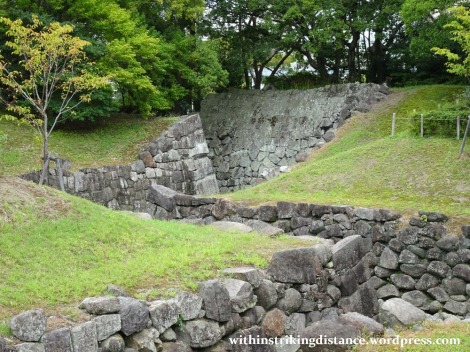 Just north of the canal is the beautiful Momijiyama Garden, completed in 2001. Despite being a relatively new addition to the compound, this splendid stroll garden exudes a suitably traditional atmosphere that fits quite comfortably within the historic fabric of the Sunpu Castle Park. 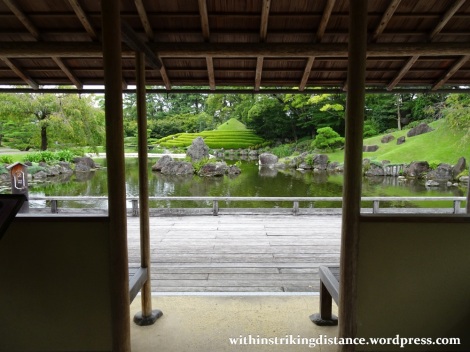 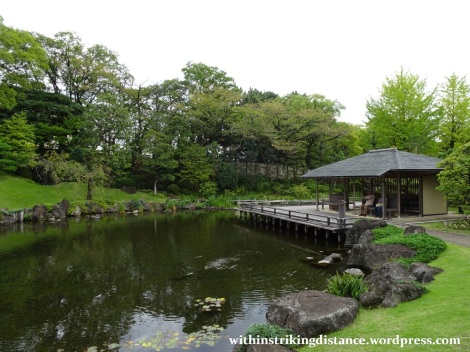 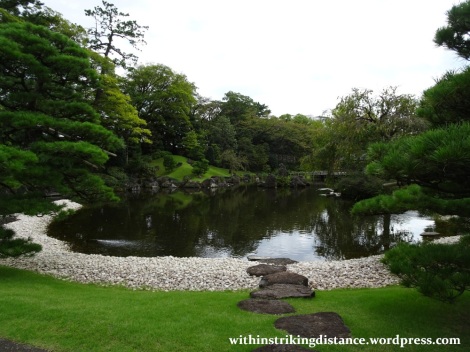 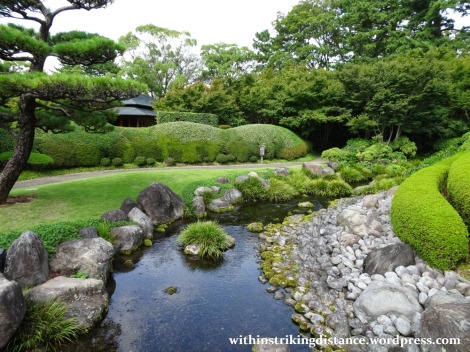 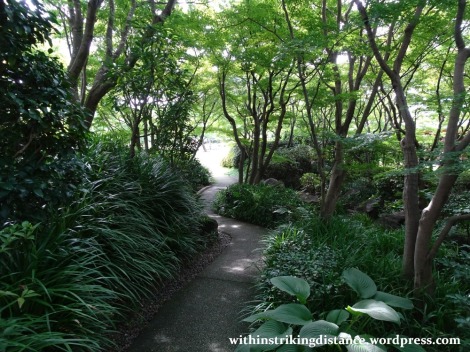 Pause for a moment or two and gaze upon the miniature Mount Fuji at the heart of the garden. The carefully trimmed bushes around the grass-covered mini-Fuji represent tea fields, an iconic feature of Shizuoka Prefecture (which produces about 40% of the tea grown in Japan).

Speaking of tea, I allowed myself some well-earned refreshment at the garden’s serenely beautiful tea room, where a few hundred yen bought me a trayful of bliss.

Feet rested and spirits restored, I made my way over to the castle park’s northwestern corner…

…where a major archaeological dig was in progress. 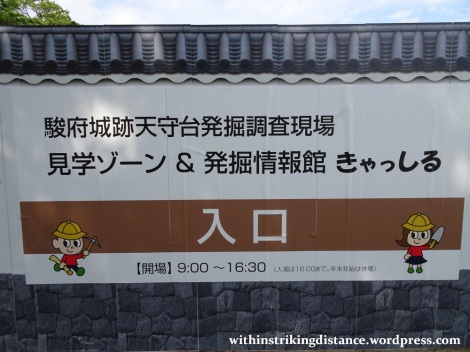 The effort revolves around the long-buried foundation platform of Sunpu Castle’s tenshu. Although the wooden tower itself was never rebuilt after it burned down in 1635, the stone-clad base on which it stood remained more or less intact until 1896, when it was pulled apart and the remains used as fill to level out the surrounding moat.

…although the highlight is, of course, the dig itself, and the newly uncovered stones of the lost tenshu platform that haven’t seen the light of day for more than a century. 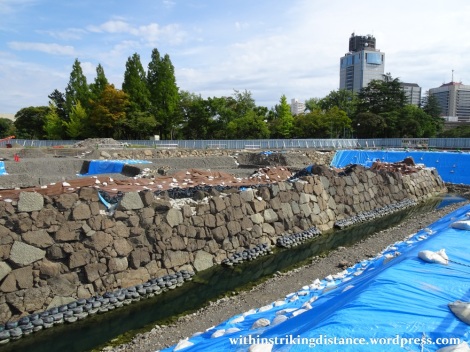 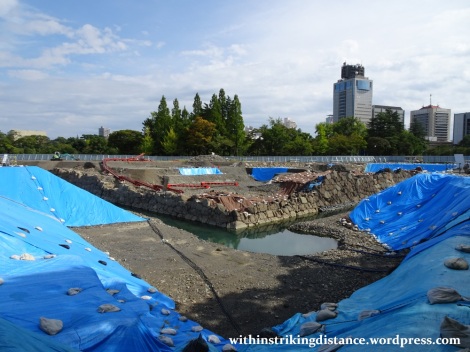 Rather than attempt to summarise the work that’s currently being undertaken, I’ll just throw in pictures of some of the information boards posted at the site. Updates are also published regularly on this webpage, though bear in mind that it’s just a machine translation and the text may occasionally seem a little awkward (or even borderline incomprehensible). 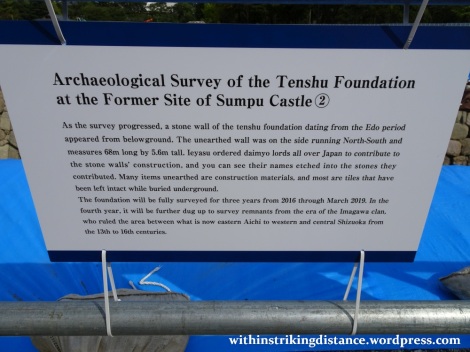 Awesome stuff, certainly for a castle/history buff such as myself. It might be stretching things to hope that this would eventually lead to a full-scale reconstruction of the tenshu – similar to the rebuilding work that’s been undertaken at other castle sites across Japan (such as Ōzu and Kakegawa) – but as always, we’ll just have to wait see. In any event, though I personally believe that such an undertaking is neither practical nor feasible at this time, I find the work that’s been done so far very encouraging indeed. I look forward to the discoveries that will be made here over the next few years, and I do intend to pop by a couple of times in future Japan holidays to keep track of progress.

Before leaving the castle park, I paid a brief visit to another recently rebuilt turret: the Hitsujisaru-yagura, which towers over the southwestern corner of the ninomaru enclosure.

Afterwards, I left Sunpu Castle Park by way of the Ninomaru Bridge (on the southern edge of the compound)… 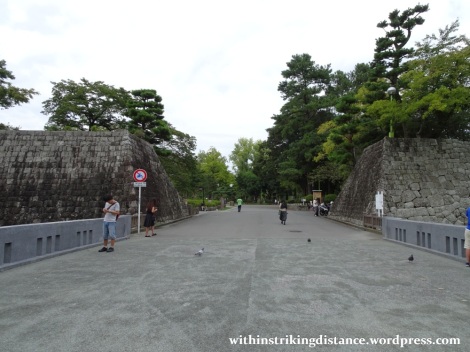 …but I wasn’t finished with the castle yet! Before heading back to the train station, I entered the Annex Building of the Shizuoka Prefectural Government Office, just a short walk – indeed right across a narrow street – from Sunpu Castle Park’s southern edge. As a visual reference, it’s the gleaming modern tower block visible from pretty much anywhere in the park, such as in this shot taken from the Momijiyama Garden…

…or here, rising up from behind the tiled roofs of the Tatsumi-yagura and the Higashi-gomon.

…which serves as a fantastic perch for viewing the full sweep of Sunpu Castle Park, as well as the city of Shizuoka beyond its walls. 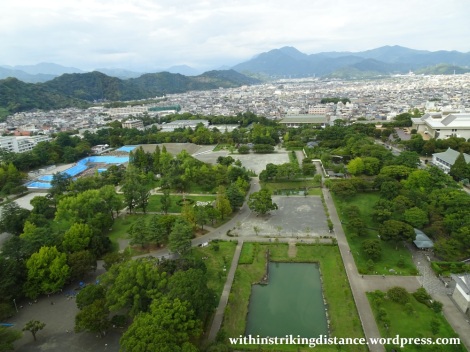 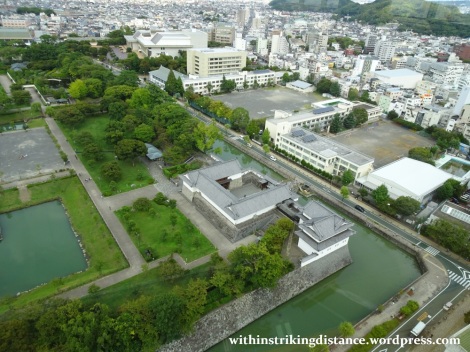 It’s worth bearing in mind that this building sits on land that was once part of the sannomaru enceinte, the outermost of Sunpu Castle’s three rings of defence – in other words, still well inside the former castle compound. (The present-day Sunpu Castle Park only encompasses the inner two sections, the middle ninomaru and core honmaru.) Quite fitting, one might say, for the present-day seat of power in Shizuoka Prefecture to be located within the walls of the fortress that Japan’s most powerful warlord once called home.

And with that, I called it a day. Through the outermost wall now, and across the third moat – a short walk that finally brought me outside the castle boundaries.

Instead of retracing the route I took that morning, I detoured a couple of blocks to the south and followed one of Shizuoka’s main shopping streets back to the station (which gave me the opportunity to enjoy a quick ramen lunch along the way).

Fuelled up on noodles, I completed the walk back to Shizuoka Station’s shinkansen platforms, where I boarded the Hikari 470 service (departing 15:38) back to Tōkyō.

And so ends yet another day of fruitful castle-hunting. My initial expectations weren’t particularly high – especially since I’d already known in advance that very little of Sunpu Castle survived the Meiji Era intact – but I found myself thoroughly impressed. Impressed, and excited: mainly with the prospect of more remains coming to light as the ongoing excavation work progresses.