The elegant splendour of Shuri Castle allows us to imagine the pampered lives that the Kings of Ryūkyū once led. At the same time, the royal mausoleum of Tamaudun – located just a short walk away – invites visitors to reflect on something altogether different: the solemn, sombre rituals that accompanied them to the grave.

First, let’s have a reminder of our present whereabouts: the city of Naha, capital of Japan’s Okinawa Prefecture.

Our visit to this particular neighbourhood of Naha began at Shuri Castle, the main residence and principal fortress of the Kings of Ryūkyū. (Read more about that experience here and here.) After doing the rounds of that historic site, we left the compound by way of its main exit – next to the Suimuikan rest centre – crossed the street and continued heading west for another hundred or so metres.

It’s a relatively featureless stroll, so let’s talk about our destination as we make our way there.

Constructed on the orders of Shō Shin (1465-1527, r. 1477–1527), third king of the Second Shō Dynasty, the monumental Tamaudun (玉陵) was designed to serve as the final resting place of his father, the dynasty’s founder Shō En (1415–1476, r. 1469–1476). In addition to Shō En – whose bones were transferred here from his original grave after the mausoleum’s completion in 1501 – Tamaudun would eventually receive the mortal remains of all but two kings of the Second Shō lineage, along with dozens of their family members. 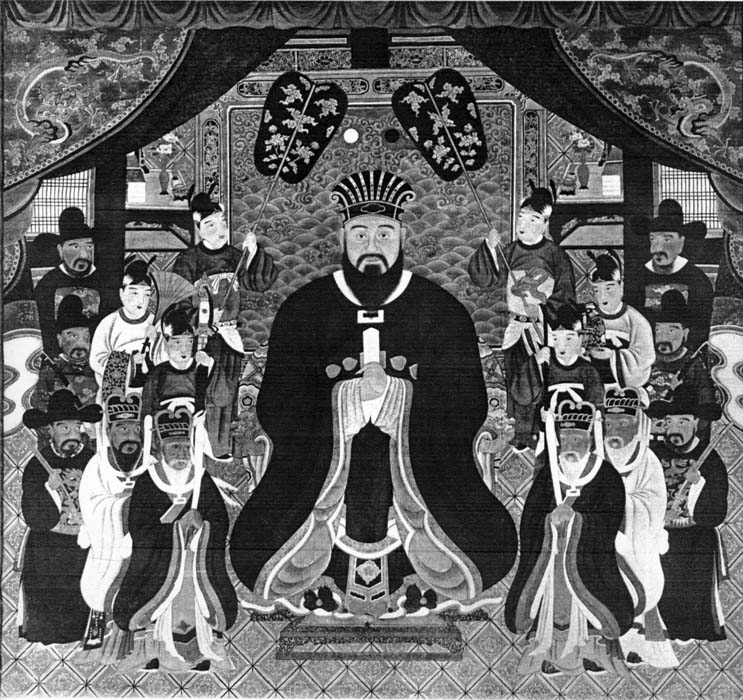 Right, we’re here. But before barging straight into the sacred enclosure, let’s gain a bit of context by visiting the small museum in the basement of the reception centre. (We’ll need to stop by the building anyway, as the entrance fee of 300 yen needs to be paid at that ticket window you see in the picture.)

Now then, let’s head east down the tree-shaded path that connects the site entrance to the mausoleum itself.

The first thing we’ll see is a wall of solid Okinawan limestone, with a single gate facing north. (Note the red-roofed wooden structure at the far end; we’ll have a closer look at that later.)

Within this enclosure is a second, lower wall, pierced by a more elaborately decorated gate than the first.

And having passed through this last gate, we now find ourselves standing before the hallowed tombs of the Ryūkyūan royal family.

There are three separate tomb chambers, each designed for a particular purpose.

The central chamber was not used for permanent burials, but played an important role in the traditional Ryūkyūan funerary process.

Although cremation is now the most common method of handling the deceased in Okinawa (as in the rest of Japan), the people of the Ryūkyū Kingdom once treated their departed kin very differently indeed. After death, a body would be temporarily interred until it was reduced to a skeleton. These remains would then be subjected to a custom known as senkotsu, where family members would wash the bones by hand and reverently place them inside a large urn or sarcophagus for permanent burial.

Here at Tamaudun, the newly deceased corpse would be temporarily laid to rest within the central chamber. In time, the bones would be retrieved and prepared in accordance with the senkotsu ritual, then transferred into a funerary container and brought to one of the other two halls.

The western chamber – the one on the right if you’re facing the mausoleum – holds the mortal remains of lesser royal family members.

The eastern chamber was reserved primarily for the Kings and Queens of Ryūkyū, though it also houses the sarcophagi of several senior princes and princesses.

Amongst them is Shō Ten (1864-1920), the former Crown Prince of Ryūkyū and son of the last native Okinawan monarch, Shō Tai (1843-1901, r. 1848-1872 as King of Ryūkyū and 1872-1879 as Lord of Ryūkyū Domain). His interment – which featured traditional Okinawan funerary rites – effectively marked the end of Tamaudun’s long service as an active place of burial, and signalled its transformation into a historic landmark.

Like nearby Shuri Castle, Tamaudun sustained heavy damage in 1945 during the Battle of Okinawa. Restoration work began in 1974 – two years after the site was designated an Important Cultural Property of Japan – and by the time the effort was completed more than three years later, the sacred precinct had regained much of its former glory. In 2000, Tamaudun was inscribed on the UNESCO World Heritage List under the group designation “Gusuku Sites and Related Properties of the Kingdom of Ryūkyū”, alongside other historic Okinawan landmarks like Shuri Castle and the Shikinaen garden.

After spending a few moments to admire the royal mausoleum, let’s head back outside and walk towards the red-roofed building we saw earlier – our last stop of the day.

This is Tamaudun’s newly rebuilt east guardhouse, the Agari-nu-ubanju (東の御番所); note that the same characters would be read as higashi no gobansho in standard Japanese. The exact reproduction we see today was based on old records and archaeological surveys that uncovered the remains of the guardhouse’s supporting pillars. As is often done for reconstructions of historic buildings, the original foundations were reburied for long-term preservation, and the replica was then erected on top.