Before Okinawa was Okinawa, it was the Kingdom of Ryūkyū: an independent nation with its own system of government and unique way of life. That realm was once ruled from within the stately confines of Shuri Castle, one of the most iconic landmarks in the prefectural capital of Naha – a royal residence whose architecture and appointments have no true equivalent anywhere else in Japan.

Shuri Castle (首里城, Shuri-jō) was once the principal residence of the ruling family of Ryūkyū, back when modern-day Okinawa Prefecture was – at least nominally – an independent kingdom. First used as a fortress in the 13th century (although the exact date of its initial construction remains uncertain), the castle and surrounding town became the new seat of royal power after the kingdom was united in 1429 under Shō Hashi. For more than four centuries, Shuri stood as the symbolic centre of life in Ryūkyū, even after the Satsuma invasion of 1609 transformed the kingdom into a satellite state of Edo-period Japan.

After the realm was formally annexed into Japan in 1879, the castle endured as a historic landmark, with its iconic main hall saved from demolition by being reused as a Shintō shrine building. Largely destroyed in 1945 during the Battle of Okinawa, Shuri Castle was gradually rebuilt in the decades that followed, and is now a key tourist draw in the prefectural capital of Naha (as well as one of the core components of a UNESCO World Heritage Site).

We visited Shuri Castle on two separate occasions. During our second visit – which will be covered in a separate post – my companion and I explored some of the structures along the outer, northern edge of the compound. On our first visit (the subject of this present report), we focused on the castle’s innermost enclosure, where nearly all of its core buildings are located.

Access information is available on the castle park’s official website – bus, automobile, and train options are all set out in detail. For our part, we took the monorail line from downtown Naha up to the nearest stop, Shuri Station, which as of this writing is the Yui Rail network’s eastern terminus. (Note that construction of a further four stations on a northeasterly line extension is now underway, with service scheduled to start in 2019.)

From here, visitors can continue on to the park on foot, following the detailed directions supplied on the official site. Alternatively, taxis can speed you there in just a few minutes and for just a few hundred yen, all within the sheltered comfort of an air-conditioned car. (Wanting to avoid the early summer heat, as well as to keep our energy in reserve for exploring the castle later, we chose the wheeled option.)

From the road, we followed a sloping path past the castle park’s rest centre, pausing along the way to admire one of the best-loved landmarks in the compound – and perhaps even in the whole of Naha.

Originally built during the reign of Shō Sei (r. 1527–1555), fourth king of the Second Shō Dynasty, the grand Shureimon (守礼門) is a fine example of the rich, Chinese-influenced architectural style favoured during the days of the former kingdom. Destroyed – along with nearly all the rest of the castle – during the Battle of Okinawa in 1945, the gate was painstakingly rebuilt in the decades after the war and has since become an icon of Okinawa as a whole, featured in everything from postage stamps to official currency.

Speaking of currency, here’s an image of the gate as featured on Japan’s 2,000-yen banknote.

Whilst not exactly rare, the 2,000-yen note isn’t widely used on the Japanese mainland, but is (at least anecdotally) easier to find in Okinawa. Indeed, on our second visit to Shuri Castle, the cashier at the rest centre’s gift shop was kind enough to include one such note in my change upon request. It’s now my most treasured souvenir of our Okinawa holiday.

A short distance east of Shureimon stands the stone gate of Sonohyan-utaki (園比屋武御嶽石門, Sonohyan-utaki ishimon). Dating from the 16th century, this monument guards the entrance to a grove revered as an utaki (御嶽), or a sacred space in the native Ryūkyūan religion. The Kings of Ryūkyū would come here to pray for safety whenever they travelled outside the castle. 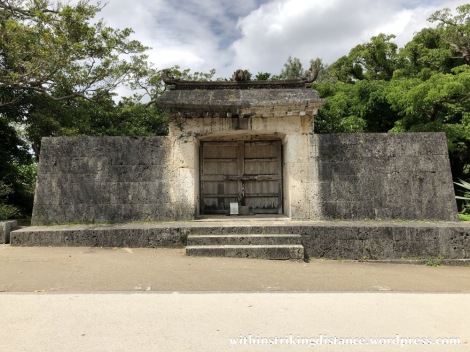 Partway up the broad flight of stone steps leading to the Zuisenmon (瑞泉門), the name of which might be interpreted as “Gate of the Auspicious Spring”… 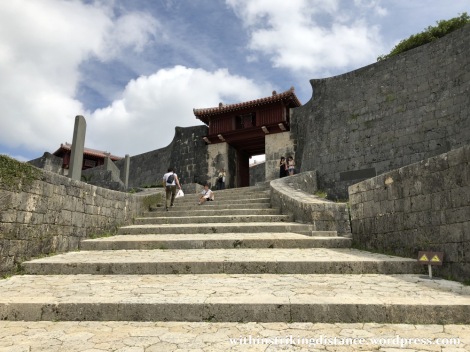 …a gap in the stonework marked the entrance to a spring known as Ryūhi (龍樋), which was used as a source of fresh water for the royal family. As a mark of how auspicious this source was believed to be, water drawn from Ryūhi would also be delivered on a daily basis to imperial envoys from the Chinese court, who would normally be billeted in a special compound near the harbour (quite some distance from the castle). 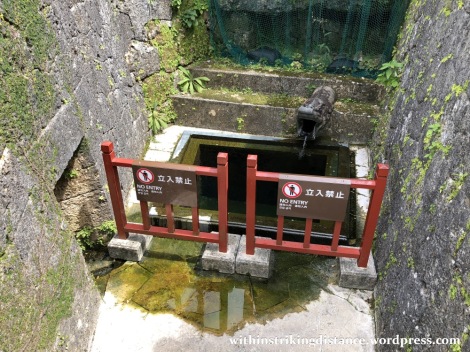 Back up to the Zuisenmon now, and through the gate into the small courtyard beyond, overlooked by the red-painted gatehouse of the Rōkokumon (漏刻門) portal. 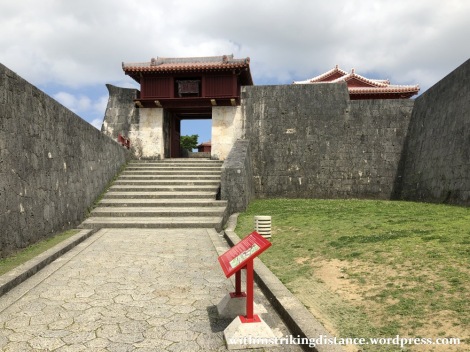 After passing through the gate, we found ourselves in a somewhat larger courtyard, with the Kōfukumon (広福門) on its southern side. 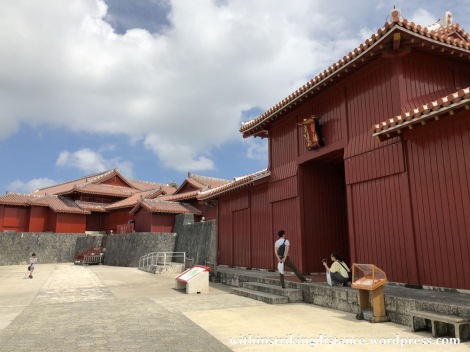 The castle’s ticket counter is built into the structure of the gate: not visible from this side, but accessible once you step into the large open space beyond.

After purchasing our tickets – price and other information available on the official site – we lingered briefly to survey the Suimui-utaki (首里森御嶽), a walled sacred space protecting a small cluster of trees. 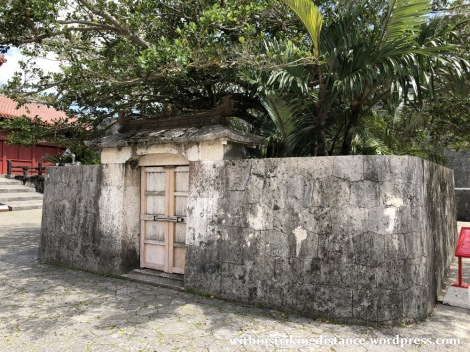 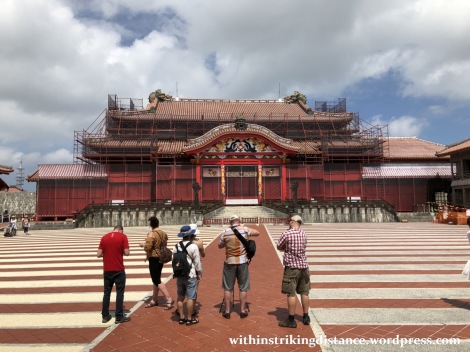 Well, almost face to face. There was relacquering work in progress at the time of our visit, so the structure was mostly sheathed in tarpaulins and scaffolding. A pity, to be sure, but it can’t be helped, and even the little of the actual building that managed to poke through the covers was still a sight to behold.

The Seiden was originally the most prominent structure of Shuri Castle to survive long after the kingdom’s annexation into Japan. Although in danger of demolition at one point, it was saved by being repurposed as a Shintō shrine hall, and was even designated a National Treasure in 1925. Obliterated during the Battle of Okinawa, the Seiden was eventually rebuilt and reopened in 1992, with its appearance reproducing that of a previous incarnation completed in 1768. 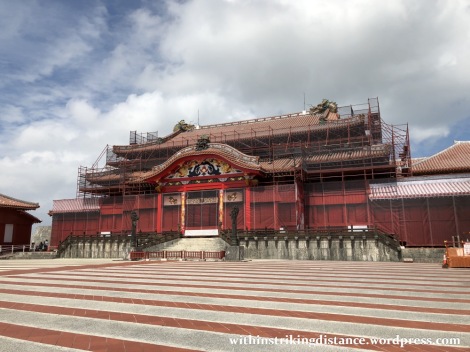 By this point, observant visitors will have noticed a common thread running throughout the compound, from the Shureimon to the structures in the Unā (particularly the Seiden). Although Shuri shares a number of elements with Japanese castles of the Edo Period and earlier – sloping stone walls, concentric rings of defence and so on – the architectural style and layout employed here is quite distinct from that of the main islands. The vast open space of the Unā, for example, has less in common with the tightly packed honmaru (innermost enceinte) of a typical Edo-period shiro than with the core sections of China’s Forbidden City or the Joseon-era palaces of Korea, which likewise feature grand halls of state arranged around a large courtyard.

Looking at the design, ornamentation, and even the orientation of the castle buildings, it’s possible to discern the cultural legacy of the centuries Ryūkyū spent as a tributary state of the Ming and Qing Dynasties, as well as the superficially hands-off approach taken by the kingdom’s Satsuma overlords in their domination of local affairs. Neither subject can (or should) be discussed at length in what’s meant to be a simple travel blog post, but if you’d like to know more, this particular work is a good place to start.

On the southern side of the Unā stands the Nanden (南殿) and, partly visible on the extreme right of the image below, the Bandokoro (番所). The former was originally used for state ceremonies and for hosting receptions in honour of emissaries from Satsuma (the Japanese domain that was the power behind the Ryūkyūan throne for much of the kingdom’s history). The latter was designed as a place for receiving visitors and messengers. Although the external appearance of both reconstructed buildings is quite faithful to the long-lost originals, the interiors are completely modern and used as museum space. 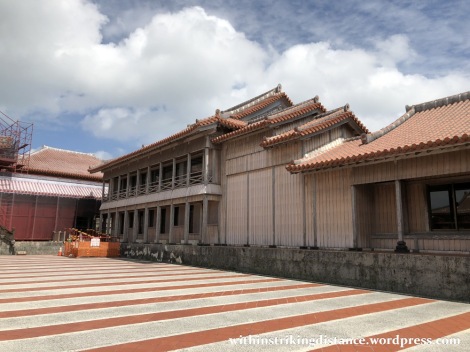 Just south of the Nanden is the Sasunoma (鎖之間). This elegant suite with garden views was originally built as a withdrawing room for Ryūkyūan princes, and as a venue where less formal meetings and receptions might be held. I’ve already written about this part of the castle in a previous post – click here to read more and to see pictures of the hall – so let’s move on to the wing next door…

…the Shoin (書院), a set of rooms used by the king for his daily tasks, as well as for hosting enoys from China and Satsuma. 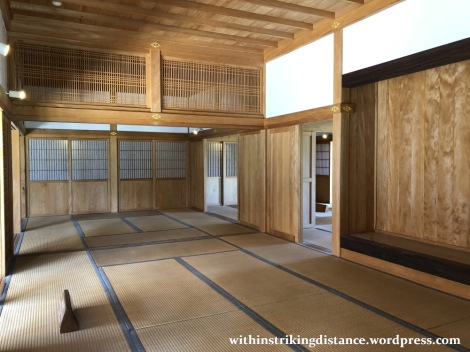 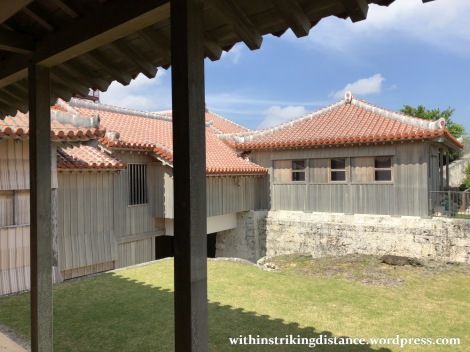 East of the Nanden stands the Okushoin (奥書院), where the king might seek a few moments of rest and relaxation in the course of his pressing duties. 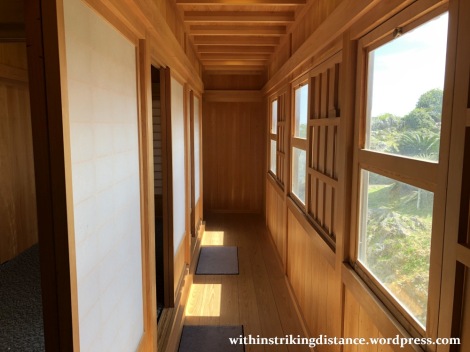 Next, we moved north into the Seiden itself, up into the second floor – and finally got our first look at the throne of the King of Ryūkyū. The replica we see today is based on historical records describing the royal chair used by Shō Shin (r. 1477–1526), third monarch of the Second Shō Dynasty, who ruled over the kingdom at the height of its prosperity.

Despite being a modern reproduction, the incredible amount of detail lavished upon this artefact serves as an effective reminder of the wealth, power, and glory that the ruling house once wielded.

Display cases in another part of the throne room held replicas of the Ryūkyūan crown and royal seals. 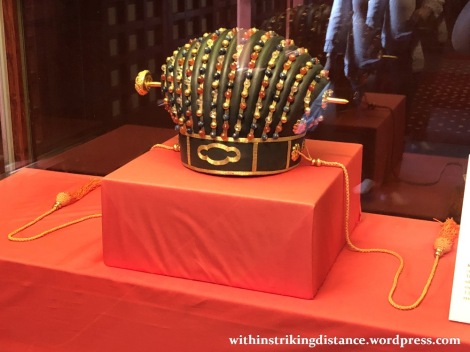 In the rear portion of the second level is the Osen-mikocha (おせんみこちゃ), a sort of private chapel where the king would come to offer morning prayers.

Down into the building’s lower level, where a windowed panel set into the floor allowed us to see some of the original stonework of the Seiden (covered for protection when the hall was rebuilt).

The main feature of this lower level is a raised platform, upon which the king sat whilst presiding over ceremonies and state business.

And that pretty much does it for the inner compound, or at least most of the parts currently open to the public.

We shall continue our tour of Shuri Castle in another post, where we’ll cover the last portion of our first visit before shifting gently into the second.