Today, we’ll experience what it’s like to use the international terminal of Okinawa Prefecture’s gateway to the world.

Note: This report covers the international departures area of Naha Airport (OKA) and its related facilities. The airport’s international arrivals zone and domestic terminal will not be described in detail.

The information presented is current as of the day I used the airport (09 May 2018). Schedules, facility information, etc. may change at any time and without prior notice. Please note that a major expansion programme is currently underway at OKA, which increases the possibility of future operational changes.

Piece of trivia: this is also the westernmost railway station anywhere on Japanese territory.

The station is directly linked to OKA’s domestic terminal via a pedestrian footbridge. Passengers heading overseas must first enter the domestic terminal’s second floor from the monorail station and follow the signs back out to another elevated walkway, which will lead them to the neighbouring international terminal. 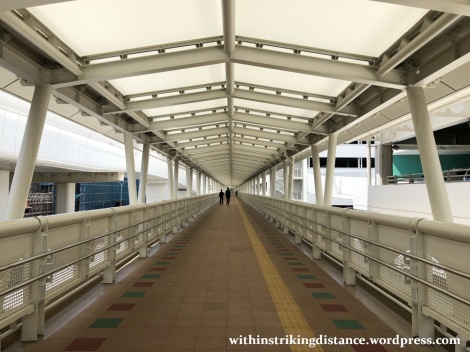 Fare information and timetables for Yui Rail services are available on the operator’s official website. A visual guide for pedestrians walking from the international terminal to the monorail station can be consulted on the Visit Okinawa tourism site.

Local, highway/express, and “limousine” bus services are also available, and might be a better choice for those travelling between the airport and places in Naha (or further afield) that aren’t served by the short monorail line. A brief summary of useful services is provided on the OKA website’s domestic terminal pages. Additional information on buses can be accessed on the Visit Okinawa tourism site and the helpful busmapOKINAWA transportation resource.

On the one hand, taxis can be significantly more expensive than either the monorail or normal buses. On the other hand, taxis might be cost-effective for groups of people travelling together. Consult the airport’s official website and the Visit Okinawa tourism site for further details.

OKA is a fairly small airport – at least, when compared with the likes of Haneda, Narita, or Kansai – but a major expansion programme is now underway to help the facility keep up with growing passenger numbers. In fact, as you walk to to the international terminal from the monorail station, you’ll probably notice a large building under construction over to your left.

More shots of the same building, taken from the tarmac (shortly after our inbound flight landed in OKA).

This structure will connect the domestic and international terminals, creating large swathes of new floor space for passenger facilities.

In addition, I invite you to zoom in/out and scroll around the embedded satellite views near the top of this post. You’ll see the faint outlines of a new, second runway starting to take shape in the shallow waters west of the airport.

Exciting times indeed … but that’s all for the future. Back in the present, we’ve got the compact international terminal to deal with. 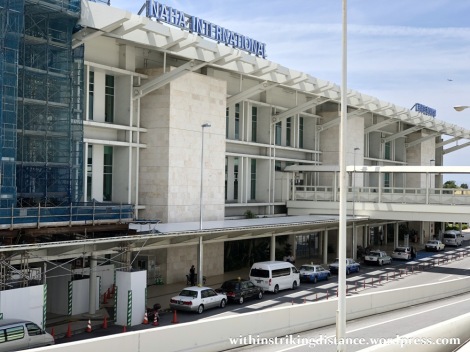 The building’s ground floor houses most of OKA’s international arrival facilities, and won’t be covered in detail here. Features of interest on this level include a convenience store and (for those fresh off the plane) the tourist information counter.

Passengers using the elevated walkway that leads from the monorail station (via the domestic terminal) will enter the international terminal on this floor.

Turn left from the entrance and you’ll see the main check-in area, equipped with two rows of counters (A and B). 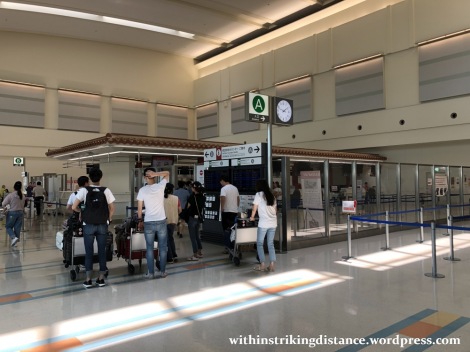 Due to the airport’s limited check-in facilities, the counters are shared and swapped between airlines. After one flight is processed, the area is swiftly prepared and reset for the next. Passengers whose flight hasn’t yet been called up for check-in cannot enter the glass partition separating the counters from the rest of the lobby, and must wait elsewhere until the appointed time.

Each of the two check-in areas is equipped with a baggage scanner at its entrance. Note that this initial inspection is for checked luggage only. Keep carry-on bags and other personal items out of the scanner, as those won’t be inspected until the usual security barrier before immigration.

After your checked luggage is scanned and sealed with a sticker, proceed to the counters and check in for the flight as normal.

Now then, if you find yourself at the terminal long before the counters open, you’ll probably want to poke around the rest of the public zone for some last-minute dining and shopping. Let’s see what’s on offer.

Near the central escalators on 2F, you’ll find two shops selling various souvenirs and knick-knacks. There’s also a cafeteria on this floor if you’re feeling a little peckish. 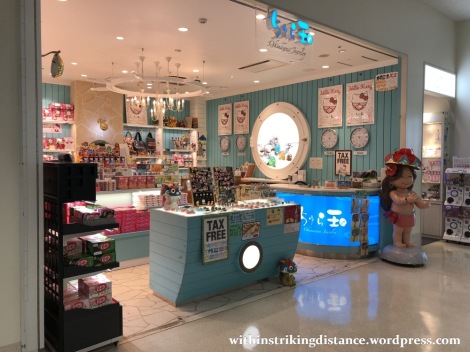 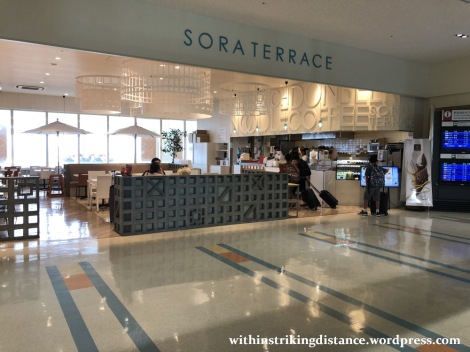 There’s a small counter near the cafeteria where passengers can charge up their portable electronic devices.

The toilets on this floor are located next to the shops. Nothing to write home about, though I observed that the gents’ facilities were clean and well-maintained.

But if you’re after something a bit more Japanese – food-wise, anyway – then head up to the third floor…

…where you’ll find the international terminal’s only proper sit-down restaurant.

There are a few additional dining options airside (more on those later), but this is really the only actual restaurant anywhere in the international building. If you’ve got plenty of time – and don’t mind a bit of exercise – an excursion to the domestic terminal may help widen your choices.

The only other facilities of note on this floor are a couple of vending machines, as well as additional seating. 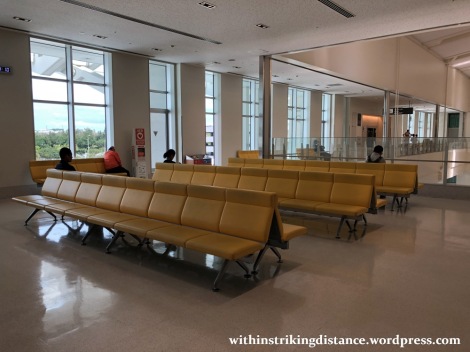 Bear in mind that the lifts near the 2F check-in counters only go up as far as 3F. To reach 4F by lift, you’ll need to use the one next to the 2F shops. (The escalators serve all floors.)

Up on the top level, you’ll find a prayer room divided into men’s and women’s compartments.

There’s also a large outdoor observation deck with views of the tarmac and the surrounding coastline. 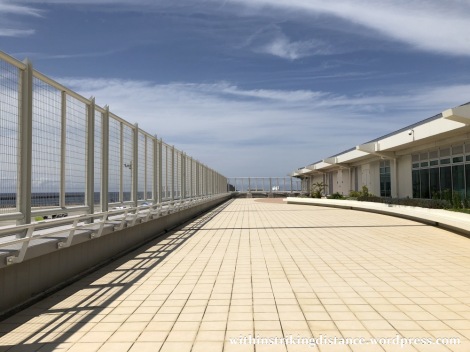 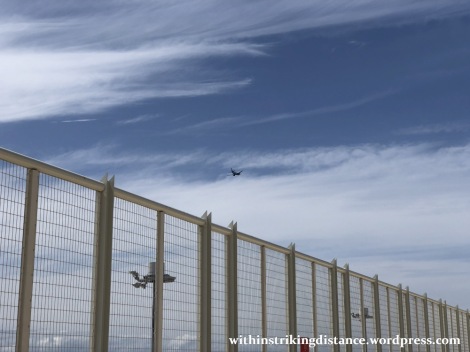 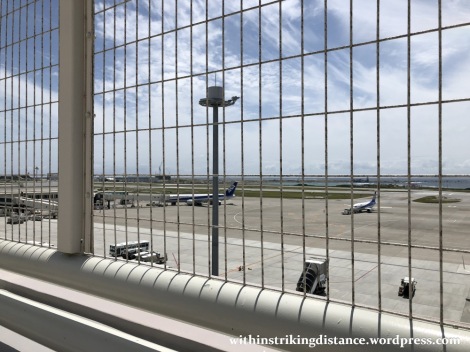 Shame about that steel cage … but I suppose it’s a necessary evil in these dangerous times.

From here, it’s also possible to sneak a peek at the roof of the new connecting terminal next to the international wing.

Right, time to check in!

Let’s head back down to 2F…

…complete the necessary counter procedures, and then march through the doors at the northern end of 2F that lead into the security inspection area.

After security, you’ll come across a customs counter where you can surrender any tax-exemption paperwork still stapled to your passport. If the counter is unmanned, simply detach the slips yourself and drop them into the marked plastic bins.

Next comes immigration. And after that, we’ll find ourselves in the…

OKA’s shopping and dining options are fairly limited landside (at least here in the international terminal), but you’ll find additional choices in the secure airside zone. Here’s a sampling of what’s available. 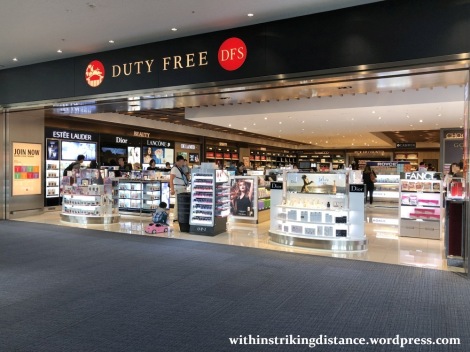 There are two smoking rooms (one on either side), along with some of Japan’s nearly ubiquitous vending machines.

The airline lounge is part of the restricted zone, but on a different floor. Eligible passengers can access the room using a lift off to one side of the boarding area. 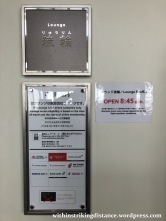 For those of us who aren’t travelling in First or Business Class, there’s a range of seating options available near the gates. 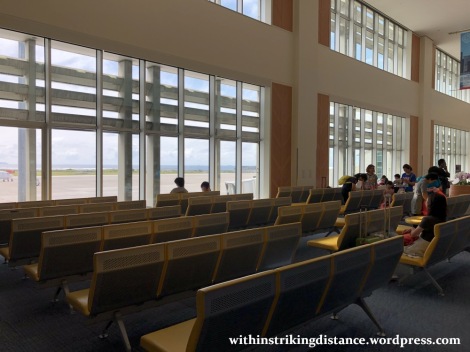 Interestingly enough, this area might be better for planespotting than the outdoor observation deck, as the large plate-glass windows offer less of an obstruction to those seeking the perfect shot. Here, for example, we see Hong Kong Airlines A330-200 B-LNE, getting ready to work flight HX659 to HKG (stated departure 1610, actual 1616).

Look carefully at the next image – you’ll notice the silhouette of a fighter jet set against the pearly white sky.

With its sandy beaches, historic sites, fantastic cuisine and many other attractions, Okinawa seems so much like an island paradise that it’s easy to forget this prefecture hosts major Japanese and US military facilities.

As for myself, I’ll close things off with one last picture…

…showing the gate where my own flight, KA379, was due to dock shortly. Leaving after any holiday is always a pity, but I do hope to march back through that very same aerobridge sometime in the near future – as a return visitor.

Naha Airport may be one of the busiest airports in Japan, but most of its throughput consists of domestic traffic. That said, the growth in its international clientele has been nothing short of explosive: increasing nearly 26% between 2015 and 2016, versus a rise of less than 5% for domestic users. Thankfully, preparations for the future are already well advanced, with the ongoing expansion project expected to increase the airport’s footprint and accommodate the rising number of visitors to Japan’s southernmost prefecture.

Until those additions are brought into service, it seems that the existing terminal is more or less adequate for catering to the numbers currently passing through. I certainly didn’t observe much in the way of crowding or queuing.

That said, there also wasn’t much in the way of shopping or dining. Nonetheless, one will find all the basics and then some, housed in a clean and well-designed terminal that offers a more positive experience than some larger airports (like my home city’s main gateway, for example). Theatres, playgrounds, concert stages, cultural experiences, and all those other non-essential things that some of the world’s best airports often boast of are well and good. But for a non-demanding passenger like myself, one who requires nothing more than a few places to snack and a few places to shop (and some comfortable places to sit of course), OKA ticks all the boxes.