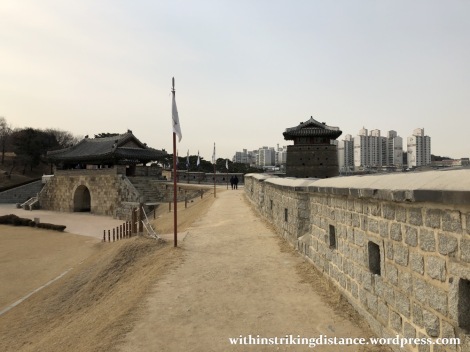 On a chilly winter’s day this past February, I returned to Suwon in order to take care of some long-unfinished business: namely, completing my trek around the city’s massive Joseon-era fortress wall.

First, a reminder of our present whereabouts: the historic city of Suwon (수원), capital of Gyeonggi-do and arguably one of the best choices for an easy day trip out of Seoul. (If you’re a history buff, anyway.)

Suwon is particularly famous for the long stretch of Joseon-era walls, known as Hwaseong (화성), that has formed a protective ring around its historic core since the late 18th century. (It’s also been a UNESCO World Heritage Site since 1997.) I’ve been hiking along the walls bit by bit across several visits – click here to read my posts describing these explorations – and today was the day when I’d walk the last section and finally complete the entire circuit.

After starting the day at the Suwon Hwaseong Museum – read more about that experience in my previous post – I headed west and then north, following Jeongjo-ro up to Hwaseong’s main northern gate… 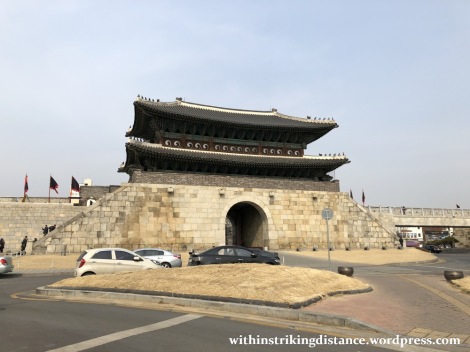 This was actually my third encounter with the gate. The first was in 2013, as part of my initial exploration of the fortress wall. The second was in 2017, when I hiked alongside the eastern ramparts as far as this gate. During the 2013 visit, I also followed the wall further west from here up to Hwaseomun, but I was walking along the outer edge on that occasion, looking up.

This time, I’ll be on top of the wall, looking down.

Do bear in mind that those using the wall-top route must pay a small entrance fee of KRW 1,000. There are no turnstiles or other physical barriers as such, but staff may check at any time whether you’ve got a special sticker that proves you’ve been to a ticket booth (NB: there’s one at several of Hwaseong’s main access points, including Janganmun) and paid your fair contribution to the maintenance of this World Heritage Site. If you happen to climb up to the ramparts by way of an unguarded, unticketed access point, no matter – do the honest thing and fork over the cash when you eventually reach an entryway that has a ticket booth.

But before we proceed, let’s have a closer look at that gate. (You’ll find more pictures – especially of the outer northern side – in my previous posts, here and here.)

Right, off we go – heading west (or more precisely southwest) towards the next major gate in the Hwaseong circuit.

The guard tower on the right side of that last image is the Seobuk Gongsimdon (서북공심돈), an observation post designed to protect the nearby gate.

One feature I found particularly interesting was the tongue-like extension that projects out of the wall and partially encloses the area immediately outside Hwaseomun, leaving only a narrow opening on the southern side. Known as an ongseong, this appendage significantly improves the gate’s defensive capabilities by making a direct frontal attack virtually impossible. (For one thing, a besieging army would find it very difficult to manoeuvre battering rams up to and against the doors.) Enemy forces would also be funnelled through a choke point, allowing defenders perched up on the gate and nearby ramparts to pick them off using arrows or firearms. The much larger northern and southern gates, Janganmun and Paldalmun, each has a fully-enclosed ongseong with its own secondary gate, different from the more basic design employed here.

Standing on the ongseong, I looked westwards towards the point where the wall starts to increase in elevation, following the slope of Paldalsan (the tall hill on the western edge of Hwaseong).

This was the final section of Hwaseong that I had not yet explored: a 500-600 metre stretch of wall extending from Hwaseomun up to the Seojangdae command post on the summit of Paldalsan.

Starting from Hwaseomun – which marked the limit of my previous explorations – I set off on my mission to conquer Hwaseong once and for all.

The first part wasn’t particularly challenging, with a steep slope easing off into a relatively flat stretch… 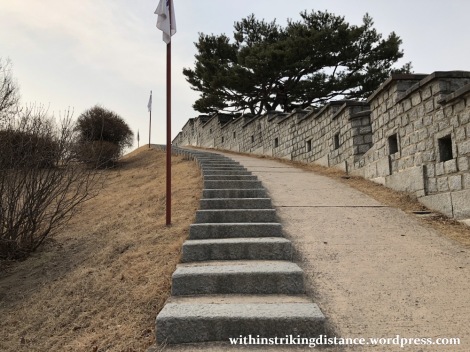 …but then the wall started rising again, the path gradually morphing from a paved ramp into a solid stairway of cut stone.

A nearby signpost wasn’t quite as well-worded as one might expect, but even a quick look at the graphic should be enough to drive home the message.

The stairs became steeper as the wall headed more deeply into the forested hillside. Experienced hikers and well-exercised folk will probably find this nothing more than a simple stroll through the park, but I’m not a particularly fit fellow and the climb seemed like a never-ending agony.

Eventually, as I crept closer to the summit, the path reared up into a virtually unbroken staircase.

Fortunately, just as my legs were about to give out completely – I write this not for dramatic effect but because I really was on the point of collapse at the time – the ground levelled off…

…and I was greeted with the magnificent sight of Seojangdae (서장대), the lavishly decorated command pavilion crowning the summit of Paldalsan. 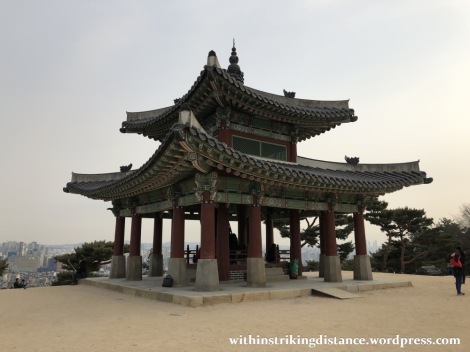 This was a familiar sight, since I’d already made it up here (albeit from the south rather than the north) on my very first visit to Suwon more than four years earlier.

At last, having finally explored the entire wall (either from the top or alongside it), I savoured this special moment of triumph – my conquest of Hwaseong was complete.

I didn’t have long to enjoy the victory, however. It wasn’t just exhaustion that was building up every step of the way: another, more pressing need had begun to manifest itself before I’d even left Hwaseomun, and by this point was threatening to erupt into a major crisis.

I’d rather not describe the situation in too much detail … but let’s just say that I was now sorely, sorely regretting the quantity of water I’d gulped down earlier in the day.

Forsaking Seojangdae, I sped off another 300 metres or so to the south, as fast as my exhausted feet would bear me. There, I found something that – at this particular moment, and under those very specific circumstances – seemed to surpass any of the historic treasures I’d seen so far in glory and magnificence and raw, unvarnished splendour. 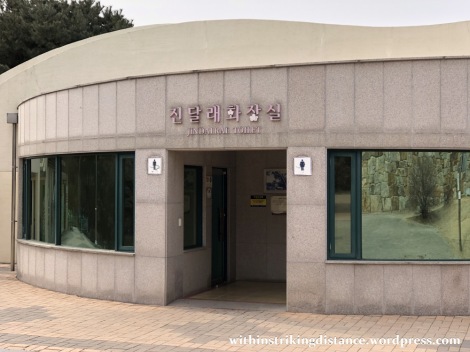 After a moment’s rest in a nearby shop, I followed a path down the eastern slope of Paldalsan, heading for Hwaseong Haenggung. About halfway on the descent, I paused for a look at Seongsinsa (성신사), a shrine built in 1796 for the protection of the Hwaseong fortress. If it looks new for a more than two-century-old structure, that’s because it underwent a major restoration in 2008-2009. 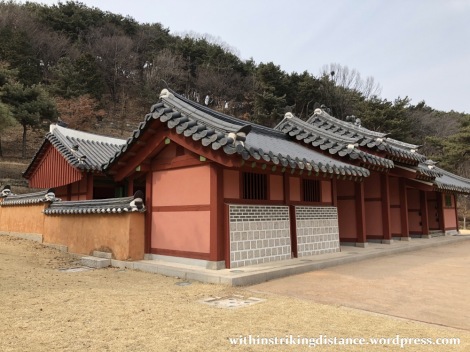 Continuing my descent, I finally emerged onto ground level and walked over to my last stop of the day: Hwaseong Haenggung (화성행궁). Originally constructed in the late 18th century on the orders of King Jeongjo, the palace was meticulously rebuilt and reopened to the public in 2003.

I didn’t take more than a few pictures during my stroll across this reconstructed Joseon royal residence, having already visited it a few years earlier. That said, I’ll throw in one photograph snapped on the palace grounds, just as an example of the rich architecture you can expect to see there. (For more images of the palace, have a look at this earlier post describing my last visit.)

And that was that. A cab ride back to Suwon Station, then a train ride back to Seoul … where I managed to do one last bit of sightseeing before finally calling it a day.

But let’s save that story for the next post.