Travelling across Korea during the Seollal holiday rush is no picnic; not when trains are filled to bursting with hordes of people flooding back into the big urban centres from their hometowns. Fortunately, the KORAIL network’s efficient intercity services can help take some of the pain out of the annual migration … provided one is sensible enough to reserve seats far, far in advance.

Note: Schedule/route information, equipment type, and other details are accurate only for the specific journey documented here. This information may not necessarily apply to previous or future trips, even if offered by the same railway company on the same route and under the same service designation.

If you’re already in Korea, you can purchase tickets from machines or from manned counters. Services between major stations (such as on the busy Seoul-Busan route) are quite frequent, so this usually isn’t a problem outside of peak travel periods. However, anyone doing so during the long Seollal or Chuseok holidays – when domestic intercity travel is at its heaviest – runs a serious risk of not being able to reserve seats on the ground.

For my part, I was well aware that tickets would be very hard to come by during Seollal 2018 (a four-day weekend this year), so I decided to book all of my long-distance journeys a few weeks in advance on the KORAIL website. I managed to lock in a single-ticket reservation for my outbound Seoul-Gyeongju leg via Dongdaegu, but couldn’t do so for the return as Seoul-bound trains were already close to fully booked. Seats were in especially short supply on the Gyeongbu KTX Line – which serves the busy Seoul-Busan corridor – thus ruling out journeys via Dongdaegu (which I’d used on the outbound leg) or departing from Singyeongju (the KTX stop serving the wider Gyeongju area). After a lot of careful test-searching, I settled on a workable solution: take the Mugunghwa up north to Pohang, then connect to a Donghae KTX Line service straight on to Seoul. Due to poor connection times, the KORAIL website wouldn’t even yield this combination as a bookable option, so I made two separate reservations (one for Gyeongju-Pohang and another for Pohang-Seoul) with a 2-hour wait in between.

Depending on how far and how frequently you intend to travel, a KORAIL Pass might help save you money, though it could just as easily help you lose money if it’s not suited to your itinerary. I’d strongly recommend doing a journey-by-journey search first, adding up the prices, and then comparing the total against the KORAIL Pass type that covers your intended period of travel.

Whichever way you go – pass or no pass – it’s possible to reserve seats as far ahead as a month in advance (though the actual period has been known to vary). Even this might not be early enough for peak season travel, and there may be additional restrictions on reservation periods for Seollal and Chuseok, so this is something that one shouldn’t put aside until the last minute.

I paid KRW 113,000 for a 3-day KORAIL Pass, which I intended to use for the Seoul-Gyeongju-Seoul round trip (across 2 days) and for additional travel on the day following. This allowed me to reserve seats online – as well as on the ground at ticket counters – for 3 consecutive days’ worth of unlimited Economy Class travel on the KORAIL network, including high-speed KTX services. Now if I were to purchase equivalent Economy Class seats on the same trains via the same route (without using a pass), the cost for each segment of the Gyeongju-Seoul leg would be as follows:

Unlike its much larger counterpart up north in Seoul, Gyeongju Station – the starting point of my journey – was a small, quiet railway stop, offering few amenities beyond the bare essentials.

Here’s a shot of the locomotive that brought me to Pohang. Unlike the high-speed KTX that would take me to Seoul on the second leg, this was a simpler, slower, diesel-run beast, designed for travel on the non-electrified section of the Donghae Line that passes through Gyeongju.

I didn’t take any photographs after boarding, but these images of the train used on the Mugunghwa 1753 service (which I rode on the previous day from Dongdaegu to Gyeongju) should give you some idea of what the interiors were like. 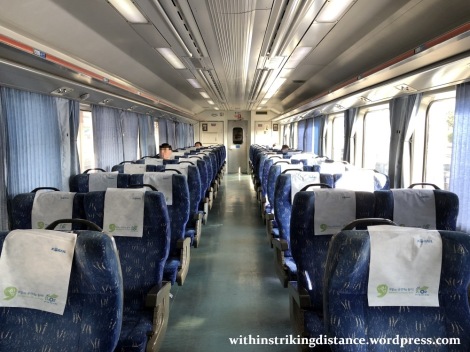 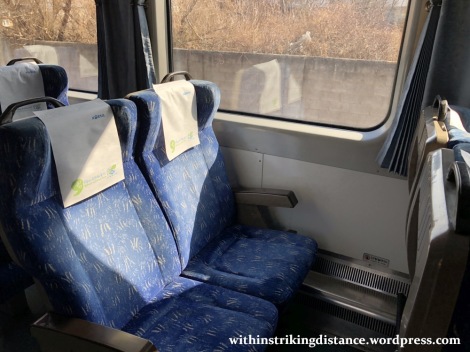 Very basic accommodations, but more than adequate for the short 35-minute hop to Pohang. (I wouldn’t want to take one of these on a long-haul run though, despite the Mugunghwa‘s much lower price point when compared with services like the KTX or ITX-Saemaul.)

With Seoul-bound trains booked solid during the homeward rush near the end of the Seollal holidays, I had no choice but to endure a two-hour stop at Pohang. Time to enjoy an early dinner…

…although that turned out to be easier said than done. Much bigger than Gyeongju, Pohang Station’s shopping and dining options were nonetheless surprisingly limited, and the tables in its small food court were already mostly taken.

Fortunately, I found an empty space and quickly tucked into a light supper (well, light by my standards anyway) of gimbap and clear soup. 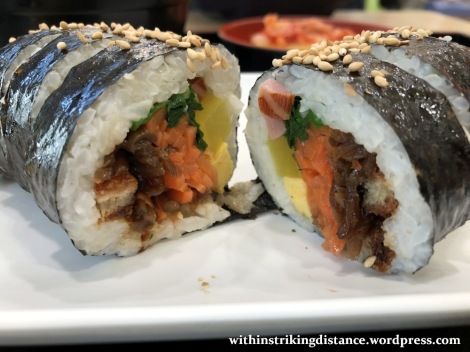 Then came the waiting. At one point, I tried my luck at the ticket counter and asked if I could change my reservation to an earlier KTX service, but even standing tickets were already sold out. (In any case, standing for the entire 2.5-hour run to Seoul was certainly NOT an option I was prepared to consider.) No matter – I soon found a vacant seat in the overcrowded waiting area, plugged my devices into a charging port (good thing they had those) and settled in with a bag of crisps close to hand.

As the appointed departure time (18:55) drew closer, I made my way over to the platforms and boarded the train assigned to the KTX-Sancheon 492 service. With crowding on the departure end plus sleepiness after arrival, I was in no fit state to take proper pictures of the rolling stock (either inside or out), but we can make do with the rather poorly composed shots to follow.

Now then, here’s tonight’s rolling stock. A KTX-Sancheon (a.k.a. KTX-II) train, newer than the KTX-I model I’d taken the day before. This particular specimen, Unit 124, began service in 2012.

For comparison, here’s the lead car of a KTX-I train that I passed later that night, on my way out of Seoul Station. (Unit 007, began service in 2000.)

The interiors of the KTX-Sancheon had a smoother, more contemporary look than those I’d seen on the KTX-I. This is Car 1, part of the train’s Economy (Standard) Class section. 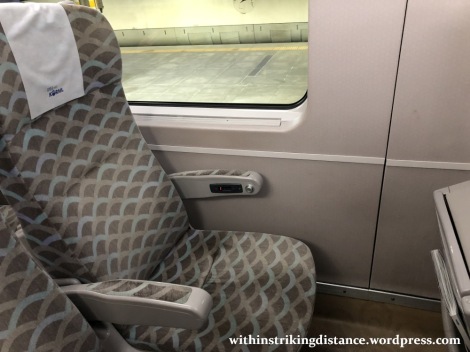 The tray table was of the same, rather unusual type that I first encountered on the KTX-I. Instead of folding down aeroplane-style, it must be pulled upwards out of a slot and then lowered into position.

Compare the above with the interiors of the KTX-I trains I’d taken on previous journeys (click here for First Class, and here for Economy Class).

The train arrived right on time, or perhaps just a couple of minutes over. Either way, I couldn’t fault KORAIL for punctuality on this specific journey.

And with that, I dragged my weary self over to my hotel (thankfully close by), plopped into bed and rested up for another day of sightseeing.

3 responses to “Rail Report: Gyeongju to Seoul on the Mugunghwa and KTX, South Korea (17 February 2018)”

Yakiniku garlic rice burger for breakfast? Works for me. #mosburger #モスバーガー
So there I was, on my way home after a morning errand, when a familiar name and logo came unbidden into view. The thing is, I don’t think I’ve ever seen a Mos Burger outside Japan (and before someone points out that they’ve had a presence in the Philippines for a few years, in my whole life I’ve probably spent far more time in Tōkyō than in Quezon City where Mos opened their first local branch). The sudden whiff of the familiar drew me in, and before I knew it I was at the counter laying siege to their menu. #mosburger #foodtruck #モスバーガー #alabangtowncenter
A quick unboxing before bedtime: Toys Cabin’s 6-item 戦国の茶器 四 利休の章 set. This features miniature replicas of tea equipment either used by or made by Sen no Rikyū (1522-1591), one of the key figures in the development of the Japanese tea ceremony. My initial disappointment in the inconsistent scale - and the fact that some of these are too large for my intended use as nendoroid props - was quickly overcome by satisfaction over the incredible detail and quality of these pieces. Easily one of my favourite gachagacha capsule toy sets thus far. #miniatures #gachagacha #capsuletoy #ガチャガチャ #戦国の茶器 #千利休
Unpacking one of the newest additions to my Japanese miniatures collection: the 5-item 空港マスコット gacha set from J.Dream (with a nendoroid figure for scale). I’d love to unearth more airport-themed miniatures of a similar scale, in the hope of assembling and furnishing an air terminal diorama for my nendoroid photography. #ガチャガチャ #miniature #airport #空港
Finishing up my unboxing of Re-Ment’s ふるさと納税便 set. No. 5: Kaga vegetables from Ishikawa Prefecture. No. 6: Motsunabe ingredients from Fukuoka Prefecture. No. 7: Kuroge Wagyū and red wine from Hyōgo Prefecture. No. 8: Farm products from Chiba Prefecture. #rement #ふるさと納税便 #リーメント #リーメントぷちサンプル #リーメントふるさと納税便 #miniaturefood #miniature
Halfway through unboxing Re-Ment’s ふるさと納税便 set. (Going slow on this one to savour each moment, haha.) No. 1: Seafood from Hokkaidō Prefecture. No. 2: Fruits and juice from Yamagata Prefecture. No. 3: Dried fish from Shizuoka Prefecture. No. 4: Rice and eggs from Niigata Prefecture. More to follow after I’ve opened boxes 5 through 8. #rement #ふるさと納税便 #リーメント #リーメントぷちサンプル #リーメントふるさと納税便 #miniaturefood #miniature
Just a little something I’m trying out to help manage my, shall we say, delicate mental state. (As you can well imagine, the last year or so hasn’t exactly been kind to my mind.) The arc is somewhere in the middle of this as-yet-untitled manga series, so I’ve written it as if the reader already knows the characters and the setting. Can’t be bothered to explain further right now, haha, though I will add that Shima Rin and Hinata Shōyō are meant to be like their anime equivalents (whereas the two older chaps are original to my work and NOT meant to parody the characters they’re derived from). And yes, this is partly why I’ve been ordering all those Japanese miniatures. I can’t draw to save my life - so I’d have to take pictures instead. 😅 Final note: read it Japanese style, right to left (otherwise the dialogue won’t make much sense).
I’ve ordered and opened more Japanese miniatures since my last post (just too lazy to mention them), but I couldn’t resist the urge to write about this Re-ment Snoopy Coffee Roastery and Café set. I’ve spent a good part of the morning reading up on coffee thanks to the curiosity generated by this set, and I think I’ve a great idea for a writing project inspired by these pieces. #リーメント #リーメントスヌーピー #リーメントスヌーピーカフェ #rement #miniatures #peanuts #snoopy