Suwon isn’t all that far from Seoul, but I was happy to try one of Korea’s long-haul tourist rail services even on the fairly short commute between these two cities. Today, let’s have a look at KORAIL’s O-Train.

Note: Schedule/route information, equipment type, and other details are accurate only for the specific journey documented here. This information might not necessarily apply to previous or future trips, even if offered by the same railway company on the same route and under the same service designation.

Country : South Korea
Railway company : KORAIL
Service name/designation : O-Train 4851
Date of journey : Saturday, 28 January 2017
Origin : Seoul Station (dep. 08:20)
Destination : Suwon Station (arr. 08:54)
Journey type : One way, partial. The O-Train serves a long tourist loop that terminates at Cheoram before doubling back to Seoul, but I only travelled on a small portion of the route.
Ticket price : KRW 8,400 for my short hop between Seoul and Suwon. Note that a complete one-way journey to Cheoram would have cost me KRW 43,400.

Let’s have a look at the route. Bear in mind that Google Maps may generate different results (including non-rail options) depending on the settings used, so the track shown below won’t necessarily reflect the actual path taken by the train. It should, however, give at least a general idea of the direction and distance involved.

There’s also a route map (in Korean) on the O-train page of the KORAIL website.

The city of Suwon is only about 30 kilometres south of Seoul, close enough to be served by the Korean capital’s metropolitan subway network (specifically Line 1 and the Bundang Line). There’s also a range of conventional rail services to choose from, ranging from the old but reliable Mugunghwa to the slick and speedy KTX. Just bear in mind that on this congested stretch of the Gyeongbu Line, the travel time on aboveground trains is roughly the same at about 25-35 minutes regardless of the service, even for the high-speed KTX (which can’t accelerate much on this initial section of track).

Where prices are concerned (and setting aside the low-speed subway), the Mugunghwa and the Nuriro come in cheapest at KRW 2,700 for the Seoul-Suwon run. Next is the ITX-Saemaul, a ticket for which costs KRW 4,800. Higher still is the KTX, which will set you back KRW 8,400 for Standard Class and KRW 13,200 for First Class.

Now if you’re happy to part with a little extra cash for a more interesting travel environment, there are two other options worth considering. Both are part of KORAIL’s growing fleet of tourist-orientated trains, featuring uniquely designed interiors and special facilities that aren’t normally installed on commuter services. These generally operate on long-distance routes, giving passengers all the time they need to make full use of the onboard amenities. That said, I certainly feel that the comfortable, colourful surroundings warrant the higher fares involved, even on fairly short hops like the Seoul-Suwon leg.

I’ve taken one of the two options – the S-Train – on a previous trip to Korea; you can read more about that experience in this earlier post. Now, it was the turn of KORAIL’s O-Train.

This service is just one link in a long eastbound loop that connects to another tourist line, the V-Train … but I won’t write about any of that here, since I didn’t go on the full experience. (If you can cope with or at least wade through Korean text, you can learn more on the relevant pages at the KORAIL website.) In my case, I only used the train as if it were a commuter service, so I’ll focus on the seating and onboard facilities.

Now then, off we go to our starting point: Seoul Station. 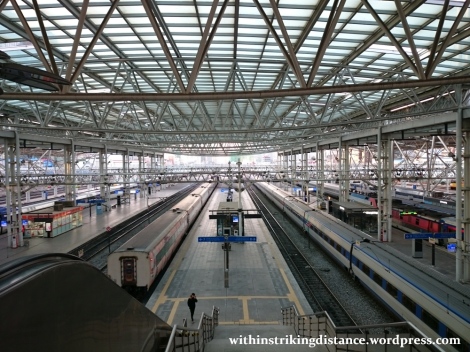 At this key transportation hub, it’s possible to do a bit of trainspotting even without leaving one’s assigned platform. Here, for example, we have a high-speed KTX-Sancheon preparing to depart for Pohang…

…and on a different set of tracks nearby, we see an ITX-Saemaeul waiting for its own turn to set off. 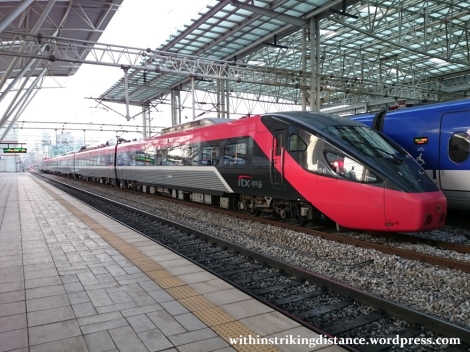 And here’s the beast that brought me to Suwon: a 200000 Series TEC with customised O-Train livery.

My assigned place was in a fairly normal-looking carriage (#4) with four-abreast seating.

That said, there were enough extras in this mostly conventional rail car to highlight its role as part of a tourist train, rather than a typical commuter service. The faux wood panelling (just plastic laminate but it does the job), along with decorative upholstery, power outlets, a large baggage rack, and a small lounge area with a wooden window-facing bench.

The next car (#3) offered semi-private seating for groups of people travelling together. There were sets of 4 seats facing each other across a table with folding panels…

…and I also saw a few “couple rooms” and “family rooms”, consisting of seats fitted inside cubicles that offered even more privacy than the 4-person booths… 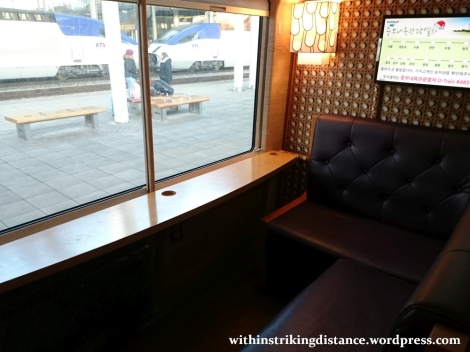 …along with a small lounge area of its own (also equipped with power outlets). 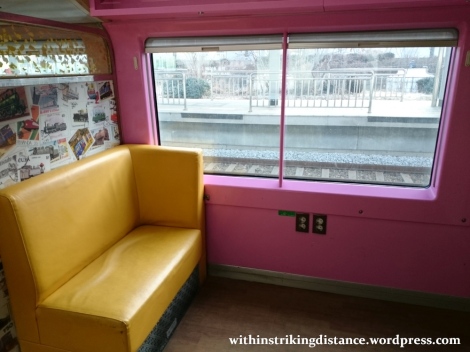 Car #2 featured a small cafe with a rather nice stained-glass ceiling. Snacks and beverages were available for purchase, and there was even a microwave oven for reheating boxed meals.

I didn’t do much exploring beyond this point, but from what I’ve seen on the KORAIL website, the rest of car #2 had a mix of seats that included pairs similar to those in #4, plus solo window-facing armchairs. Car #1 seemed pretty much identical to car #4, both in terms of seat type and interior decoration.

So there we are. More expensive than commuter rail services, yes, but even on a fairly short 34-minute hop between Seoul and Suwon, the price seems fair in return for the more relaxed atmosphere and interesting interiors. (I was on holiday, after all; if all I wanted was to get to Suwon as efficiently as possible then the Mugunghwa or Nuriro or ITX-Saemaul would have sufficed.) I certainly plan to visit Suwon again on my future trips to Korea, and unless I happen to be on a very tight budget, I shall probably hop onto the O-Train or a similar tourist service when I do so.