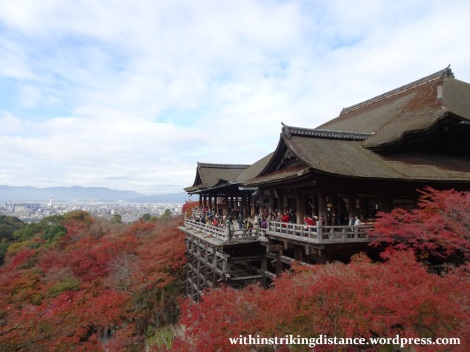 Kyōto’s Higashiyama district is an area I’ve grown rather fond of, and quite familiar with, through my regular visits to Japan’s former capital. Since I first came here several years ago, I’ve seen a few things change – and not always for the better. The crowds, for one, have grown so unbelievably thick as to almost choke the life out of this historic neighbourhood. But not even my distaste of crowds could stop me from going on yet another prowl across these hilly streets, starting (as these walks almost inevitably do) from the area’s most famous landmark.

In my previous post, I mentioned that my original plan for the 25th of November was to visit Kōrankei – a valley famous for autumn colours – on a day trip out of Nagoya. Due to various reasons, I decided to drop Kōrankei from my itinerary and transfer to Ōsaka immediately via an early shinkansen service (instead of the evening train I was planning to take) so that I can spend most of the day in nearby Kyōto.

Transfer completed. Luggage abandoned. (At my hotel, mate, not on the street.) Short train ride to Kyōto, bus ride to the Higashiyama district. The easy parts taken care of, I now faced a chore familiar to the many thousands who have made the trek to this prime tourist magnet: trudging up a long street, uphill all the way… 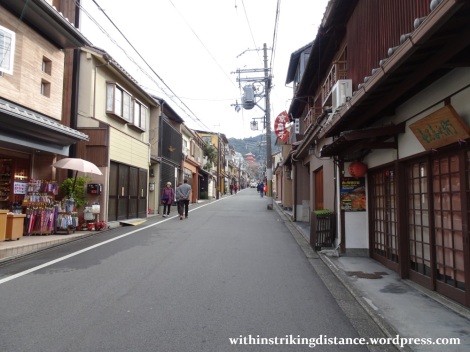 …to what is probably the area’s best-known attraction: the hillside temple of Kiyomizu-dera (清水寺). In the interests of brevity, I won’t launch into the usual discourse on the landmark’s history and architecture and so forth. This Wikipedia article (sketchy though it may be in parts) can start you off in terms of background information, and this Japan Guide entry offers useful details on access, gate charges, and operating hours.

Right, so much for the preliminaries. Up I went on the broad flights of stone steps leading to the temple compound…

…pausing briefly to admire the pagoda near the main hall. Restored quite recently, judging from the fresh-looking paint job.

Onwards, to Kiyomizu-dera’s iconic Hondō (本堂, Main Hall), the present iteration of which was built in 1633 and is an officially designated National Treasure of Japan.

The hall’s most famous feature is the large wooden “stage” that juts out from the side of the building over the valley below. I don’t think I’ve ever seen this spot not crowded with visitors… 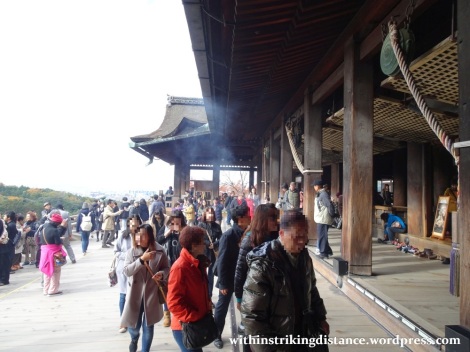 …though that’s only to be expected, given the fantastic views that can be enjoyed from here. 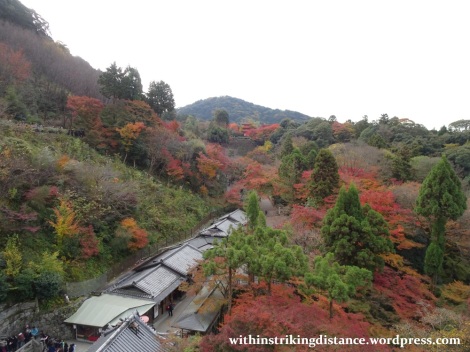 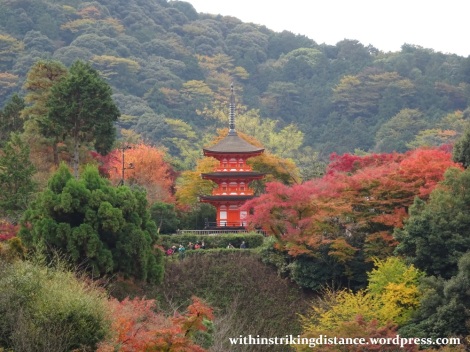 By the way, we’ll have a closer look at that distant pagoda later.

The Hondō itself is best admired from on or near the similar hillside terrace attached to one of Kiyomizu-dera’s secondary halls, the Oku-no-in (奥の院). At the time of my visit, the Oku-no-in and its terrace were in the midst of major restoration work…

…but a temporary walkway had been installed to maintain this vantage point’s unhindered view of the Hondō. (Needless to say, there was fierce competition for the best photo spots, and it took a fair bit of waiting and jostling to lock in these pictures.)

Incidentally, as of this writing, it was the Hondō’s turn to undergo repairs, and visitors making their way to Kiyomizu-dera will find the main hall covered up in scaffolding until 2020. Work began in February of this year, which in retrospect makes my November 2016 visit (mere months before the unsightly scaffolds went up) seem all the more well-timed.

My previous visits to Kiyomizu-dera were fairly abbreviated, but on this occasion I chose to go all the way to the Koyasu-no-tō (子安塔 or 子安の塔), the pagoda located across the valley from the Hondō. (Yes, the same one I promised we’d have a closer look at.) Koyasu, 子安, means safe or easy childbirth, and folklore has it that a visit to this tower will help grant that particular blessing to expectant mothers. 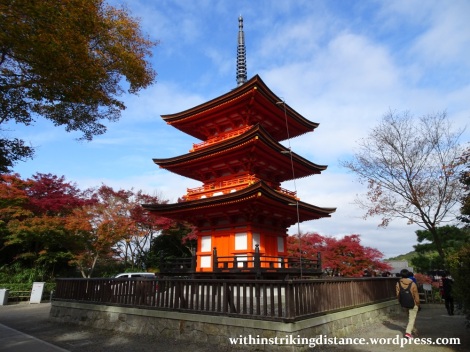 Being neither a Buddhist – I am, in the words of my favourite author J.R.R. Tolkien, “a Christian, and indeed a Roman Catholic” – nor an expectant mother, my interest in this building was purely architectural. The fact that one can also enjoy great views of the Hondō from this southern part of the temple compound didn’t hurt its appeal, either.

From here, I descended into the valley and headed north towards the foot of the Hondō, close to which stands the Otowa-no-taki (音羽の滝). Streams of clear, pure water – giving rise to the name of the temple itself, kiyomizu (清水) – are channelled through three separate stone spouts into a pool below. Visitors reach out with long-handled dippers to catch the water as it cascades from the spouts, believing that to drink from this source will aid them in various ways: purification, longevity, or other aspirations of that kind. Needless to say, the queue was long… 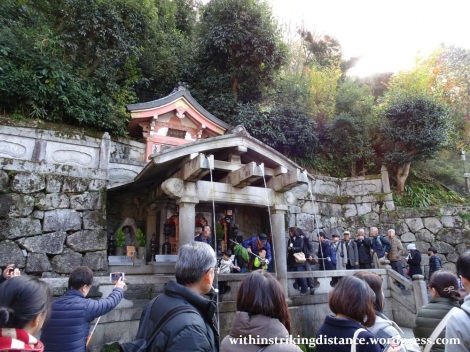 …but as a Catholic of a rigidly conservative sort – one who avoids actively participating in rituals of a different faith tradition – I respectfully observed from a distance and simply walked on past. (One less queue to worry about, at any rate.)

Soon, I found myself looking straight up at the floor of the Hondō’s famous “stage”, borne aloft by massive wooden pillars and beams. 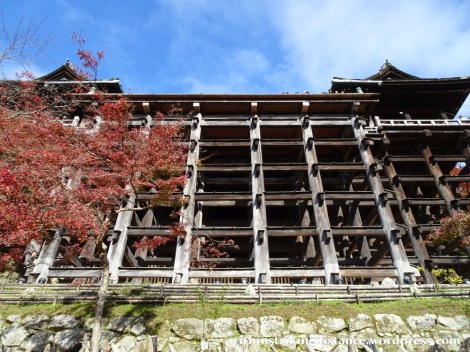 The path near the valley floor is also a good place to admire the massive stretches of tightly-fitted stone that encase the hillside on which Kiyomizu-dera stands. 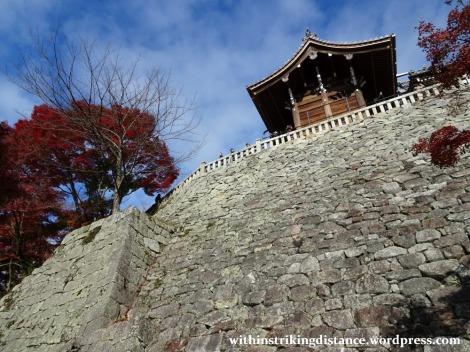 Now then, some commentary of a seasonal nature. Late November to early December is usually the best time to admire autumn colours in this part of Kyōto, and you’ll have noticed in the pictures above how the changing leaves made the valley and the Hondō look all the more picturesque. That said, it was a bit of a mixed bag in terms of quality, with trees at peak beauty mingled with bare branches on the one hand and shades of green on the other. Here, for example, we see leaf cover that was exploding with crimson on the fringes whilst tenaciously maintaining its normal colours further down.

Further on, I encountered some of the best colours I’d seen that day: rich hues of red spreading out across the pale blue sky. 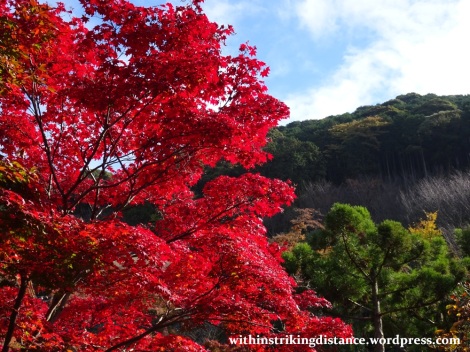 For the most part, it was something of a blend, though having splashes of green and pale yellow mingled with fiery shades of orange does offer a rather appealing variety. 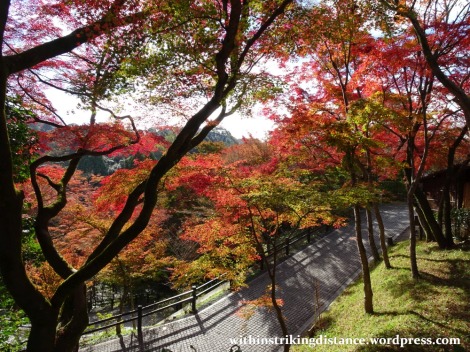 Now that was a great start to my journey across Higashiyama. As for what followed … well, let’s save that tale for another post.