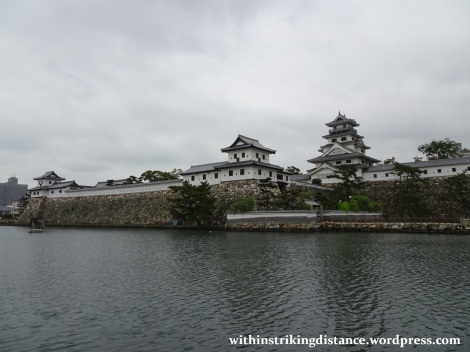 I’ve logged thousands of miles of travel through the years in pursuit of the two Japanese things that interest me the most: trains and castles. Needless to say, I find a journey especially rewarding when I can satisfy my thirst for both in one fell swoop – and there are few places better endowed in that regard than the island of Shikoku.

Now this wasn’t my first time on the island, and in fact I’ve already seen a couple of fine Shikoku castles (and taken some fine Shikoku trains to reach them) earlier in this twelfth Japan adventure – see this post and this post for more about those. However, all that was merely the first movement in a veritable symphony of travel across this corner of the country, an area that I hope to visit again in the years to come.

But let’s leave the future to its own devices, and turn our thoughts back to the journey at hand. From my hotel in Okayama, I walked to the nearby railway station and set off for Matsuyama, Shikoku’s largest city, by way of the Shiokaze 1 limited express service.

I plan to write a separate trainspotting post covering the rich variety of railway stock I encountered on this trip – specifically in Shikoku – so I’ll tone down the nerdy railfan talk for the moment. Briefly, our ride was a JR Shikoku 8000 Series EMU, set L2, and my seat was in the Green Car (first-class compartment). 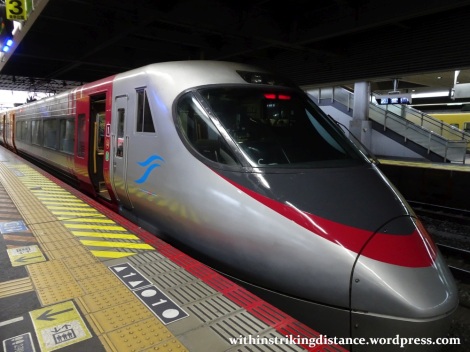 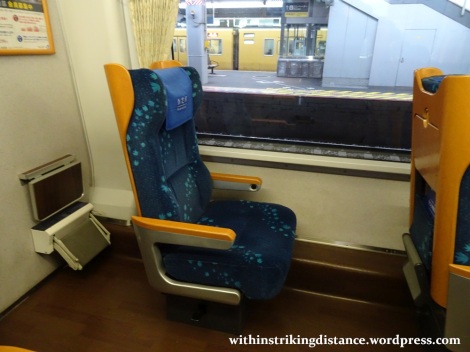 After dropping off my luggage at the hotel, I returned to Matsuyama Station and boarded the Shiokaze 16 service. Another 8000 Series EMU, set L4 this time. 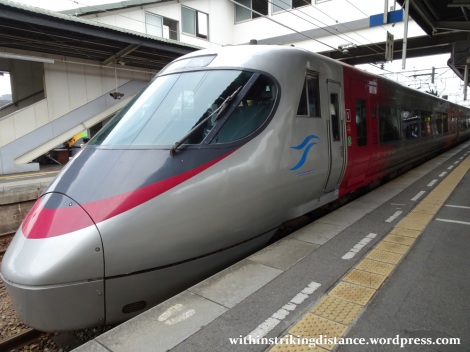 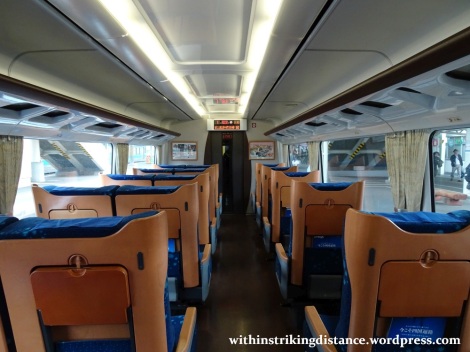 Less than 40 minutes later, I reached my destination: the port city of Imabari, in Shikoku’s Ehime Prefecture.

Another 20 or 30 minutes later – though it would have taken much less than that if I’d gone by bus or taxi rather than on foot – I reached my main target for the day.

Completed in the early 1600s, Imabari Castle (今治城, Imabari-jō) was designed and built on the orders of the warlord Tōdō Takatora. In 1635, the castle and the surrounding domain passed to the Hisamatsu branch of the Matsudaira family, relatives of the ruling Tokugawa house, and it remained under their control until the end of shōgunal rule in the latter half of the 19th century. Shortly thereafter, like nearly all other castles in Japan, Imabari was demolished on the orders of the restored imperial government. A few structures have since been rebuilt, to varying degrees of authenticity – as we shall see later – and the castle has now regained something of its original Edo Period profile.

I approached the castle from the west and gradually made my way to its main gate in the north-eastern corner. A long walk, but all the better to appreciate the grand sweep of the fortress and its buildings. 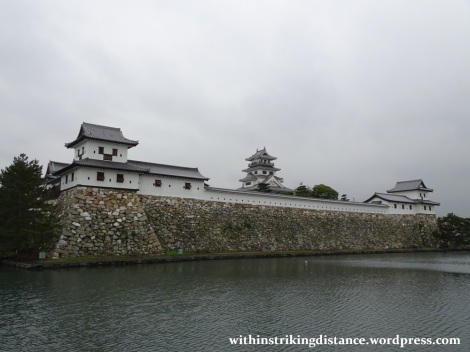 Note the small sliver of stone-lined earth running along the foot of the castle walls. Being sited so close to the coast, the ground on which Imabari Castle stands is made up of weak, sandy soil, which had to be reinforced before it could bear the immense weight of the structures built on top. That narrow corridor of earth, known as the inubashiri, provided the extra margin of strength needed for the artificial island to hold its shape and support the stone-clad walls.

I crossed the moat on a paved causeway that led straight to the castle’s main gate, the Kurogane-gomon.

The layout follows the classic four-sided masugata pattern, with an open zone surrounded by walls on all four sides. Here’s two of the walls, topped by a structure known as the Tamon-yagura…

…and another wall, formed by the massive iron-plated Kurogane-gomon… 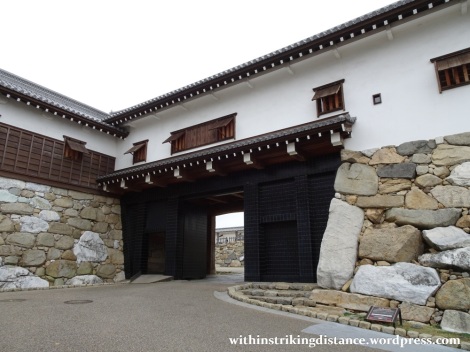 …and – hmm, now where’s that fourth wall? The structure itself is long gone, but tilt your head down and glance at the pavement…

…where you’ll see two large patches of grey paint. These mark the location of stone walls that once flanked a secondary gate, the Kōrai-mon, which stood on the unpainted ground in the middle. A besieging force would have had to breach this smaller entrance first. If they succeeded, they would then have to try and penetrate the much larger and more heavily reinforced Kurogane-gomon, all the while being showered with arrows and firearm volleys (along with rocks and hot oil and whatever else came to hand) from the gatehouse and the Tamon-yagura overhead.

Here’s another view of the Kurogane-gomon, as seen from inside the castle.

A short distance away, standing on the northernmost corner of the castle walls, is the Bugu-yagura.

This defensive turret is linked directly to the overhead gatehouse of the Kurogane-gomon, which is in turn connected to the Tamon-yagura beyond. None of the three is an Edo Period original, but the reconstruction was carried out in a manner that faithfully reproduces the form and layout of the destroyed buildings…

…as became apparent once I stepped inside. 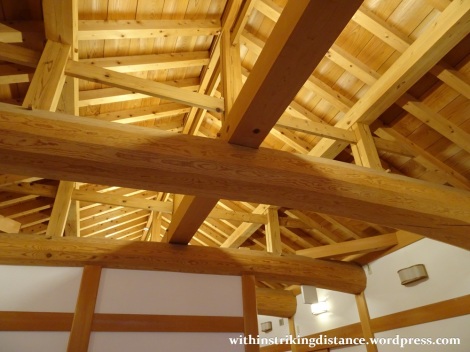 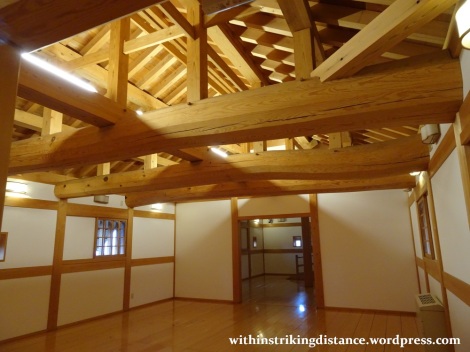 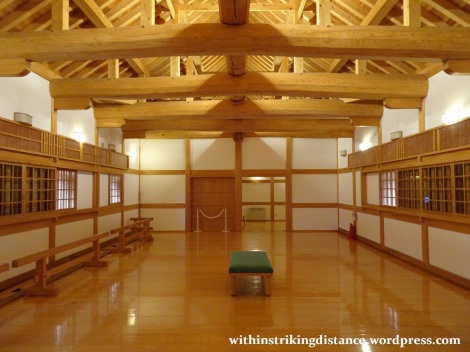 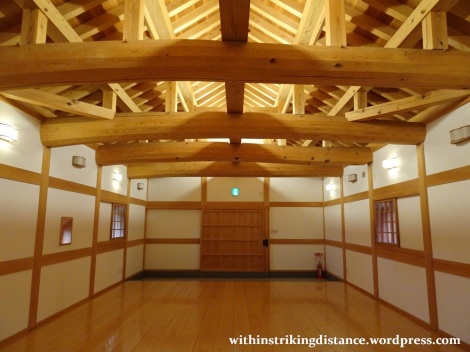 Rather than cheap, inauthentic steel and concrete – the ingredients of choice for many castle reconstructions carried out in the 20th century – traditional materials and techniques were employed here. It’s a recent and very encouraging trend that I’ve observed in newer castle restoration projects (some of which I’ve previously featured on this blog), and long may this devotion to accuracy continue.

Two other corner turrets have also been rebuilt. There’s the Yamazato-yagura in the north-west, overlooking one of the castle gates… 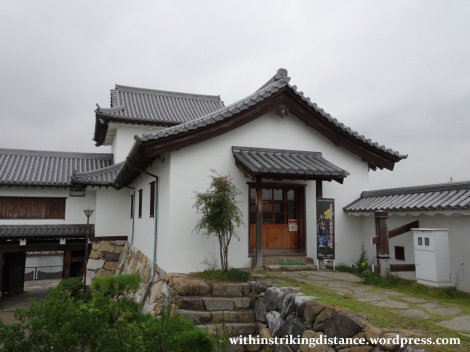 …and the Okane-yagura in the east. Both towers are currently used as exhibition spaces. 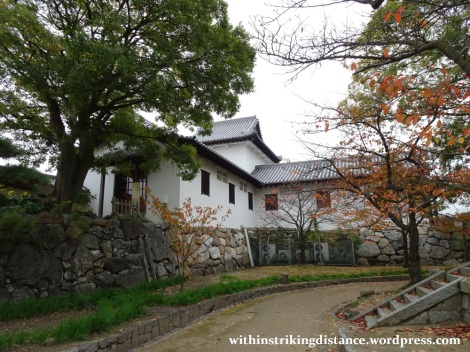 Of course, one can’t ignore Imabari Castle’s soaring tenshu, or main tower. Rebuilt in 1980 as part of celebrations marking the 60th anniversary of modern-day Imabari City’s establishment, the tenshu looks quite impressive on the outside… 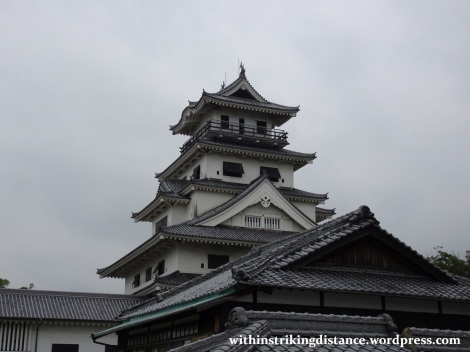 …although, as is typical of many reconstructed castles, it’s all bland concrete modernity on the inside, with little attention paid to accurately reproducing the original interiors.

Incidentally, after the castle buildings were torn down during the Meiji Period, a Shintō shrine was built within the empty castle walls. It’s got a torii corridor reminiscent of the famous one at Fushimi Inari in faraway Kyōto – nowhere near as long or impressive, to be sure, but quite photogenic nonetheless. 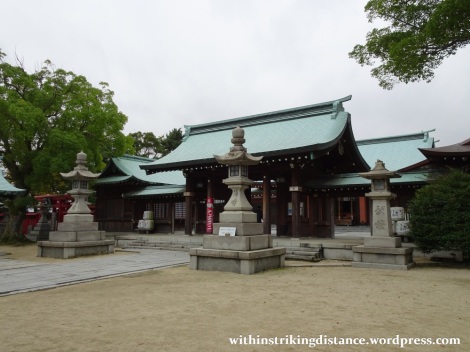 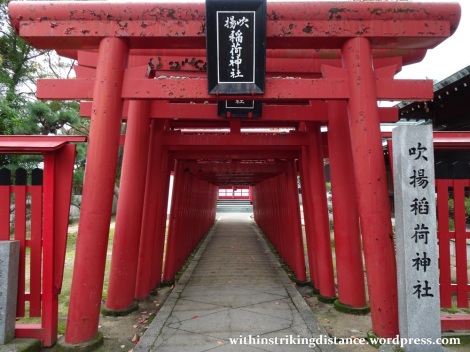 As I left the castle and began the long walk back to the train station, I paused to observe this rather large gap in the stone walls surrounding the moat.

Imabari Castle’s vast defensive moat is filled with seawater drawn through this inlet, and the water level moves up or down depending on the tide. In fact, as I stood there watching, I could see large ripples indicating that water was flowing through.

Off to Matsuyama now for a good night’s rest. As promised, I’ll save most of the railfan talk for a separate post, but just a few words on my homebound train: the Shiokaze 11 limited express service, JR Shikoku 8600 Series EMU, set E2. The interior photograph is of the Green Car. 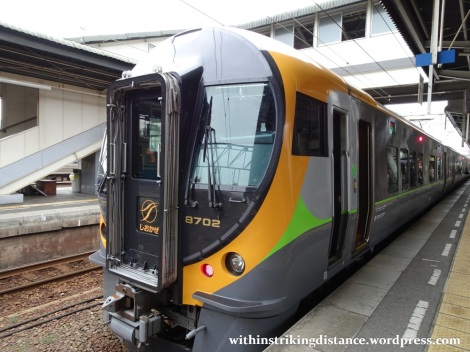 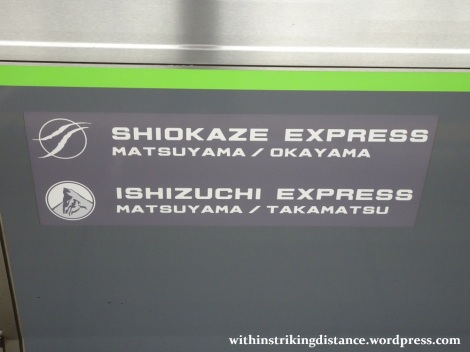 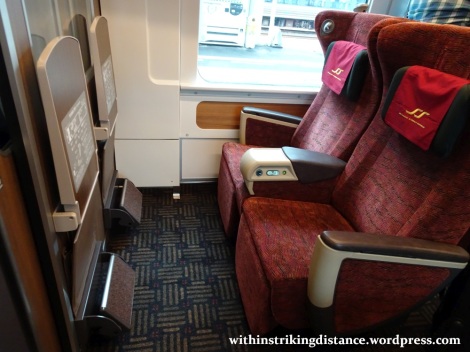