Many old Japanese towns are famous for their castles, but the city of Iwakuni in Yamaguchi Prefecture is best known for something else: namely, its unique and splendidly beautiful wooden bridge. (The fact that it’s got a castle of its own is an added bonus, of course.)

I was based in a hotel near Shin-Yamaguchi Station, from which Iwakuni – by way of its bullet train stop, Shin-Iwakuni Station on the San’yō Shinkansen – was just half an hour away. My ride was the Kodama 730 service, and the rolling stock was an ageing 500 Series Shinkansen…

…albeit one made up to look quite different from others of its class.

As a point of reference, here’s what a typical 500 Series looks like. 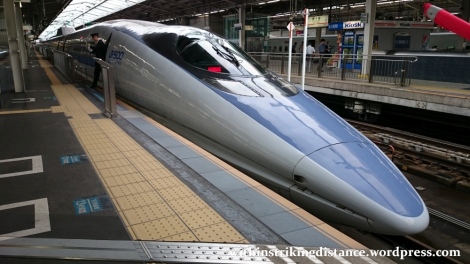 Not bad, not bad at all – but they’re about 20 years old and clearly showing their age (especially on the inside). As for that particular morning’s 500 Series train: well, let me describe it in one word. 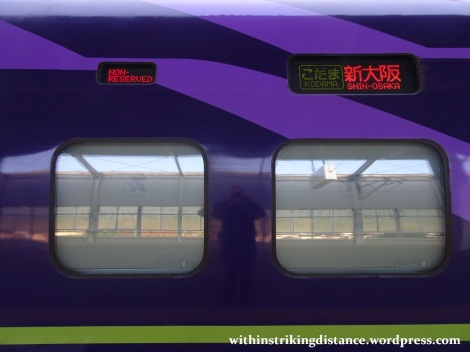 I won’t say more about this special commemorative service; all the relevant details are on the official site if you’re interested. In any case, the particular car I travelled in wasn’t decorated in the special EVA theme – it was just a boring reserved-seat carriage with ancient, dull-looking upholstery and discoloured wall panelling. 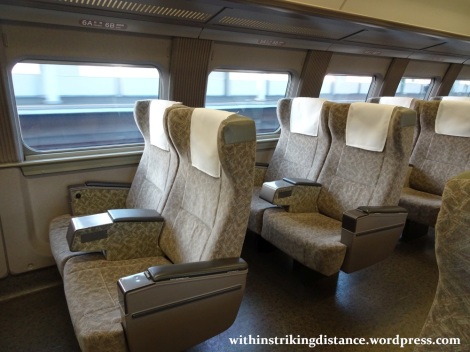 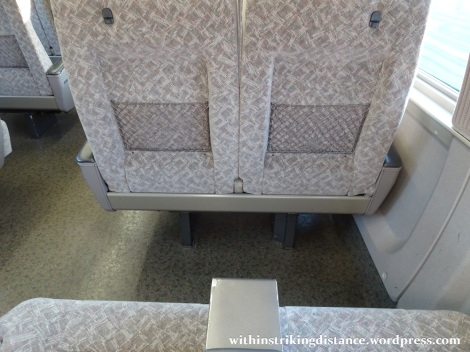 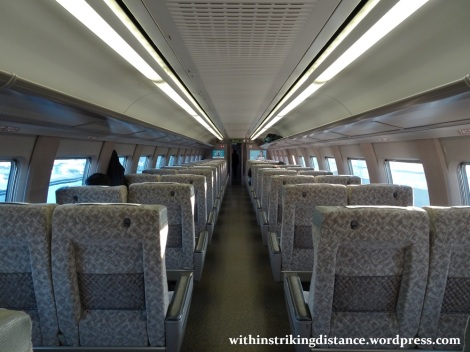 From Shin-Iwakuni Station, I boarded a bus that brought me to a stop near my first attraction of the day: the Kintai Bridge (錦帯橋, Kintai-kyō). Although bridges have spanned the Nishiki River at this spot since the early 1600s, offering a direct route to the main gate of Iwakuni Castle (of which we shall have more to say later), the Kintai-kyō as we see it today is largely the product of a late-17th century rebuilding. Carefully maintained and periodically reconstructed throughout the Edo Period, the iconic structure suffered from neglect during the straitened circumstances of the Second World War and was ultimately destroyed by floodwaters unleashed during a typhoon in 1950. Within just three years, the Kintai-kyō was completely rebuilt, and after a major refurbishment that ended in 2004, it’s as impressive a sight as it ever was. 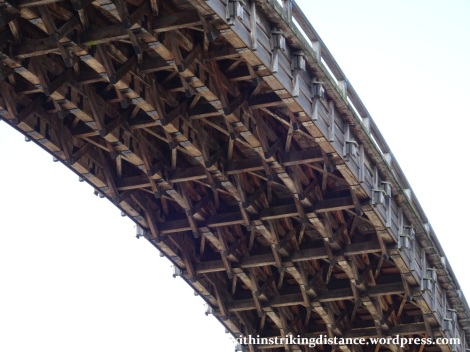 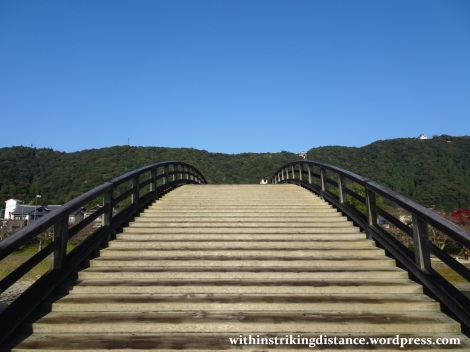 Looking down upon the river, I spied a chap armed with a fishing rod and trying his luck in the cold, clear, rushing waters of the Nishiki River. 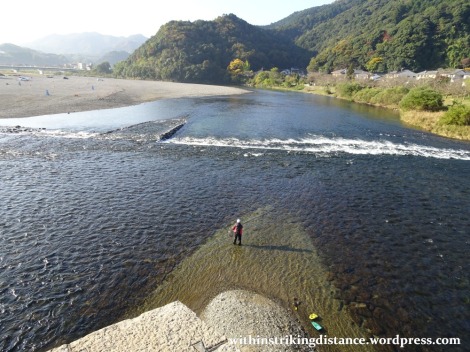 And looking up towards the thickly forested hill in the distance, I caught sight of Iwakuni Castle, which was my next major target of the day. 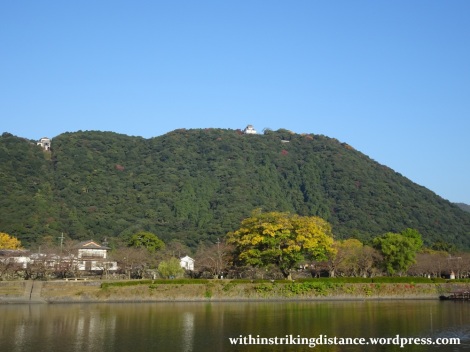 A ropeway hauls vistors up to the castle and back. Having arrived before service hours, I had a bit of time to spend in leafy Kikkō Park (吉香公園, Kikkō-kōen) at the foot of the hill.

There’s a decent selection of museums and other points of interest in this public leisure area, most of which I’ll have to come back for on a future visit (either because I’d arrived before opening hours or, after returning from the castle, was too much in a hurry to leave). I did manage to walk by a couple of old samurai residences from the Edo Period…

…and there were also some natural attractions to be savoured. As befitted the season, some of the park’s trees were starting to put on their glorious fall finery… 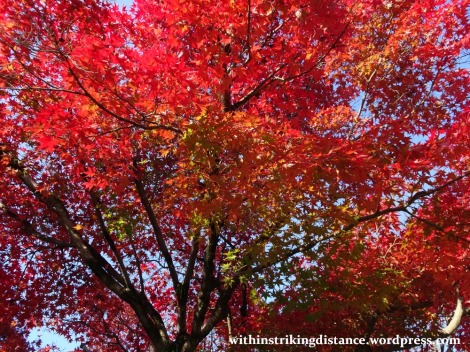 …whilst others were looking a wee bit out of season, but in a very good way indeed. The park features several Jūgatsu-zakura (十月桜, literally “October Sakura”) trees, which normally start blooming late in the year – around autumn or winter depending on the region – rather than in the spring as most other cherry blossom trees do. 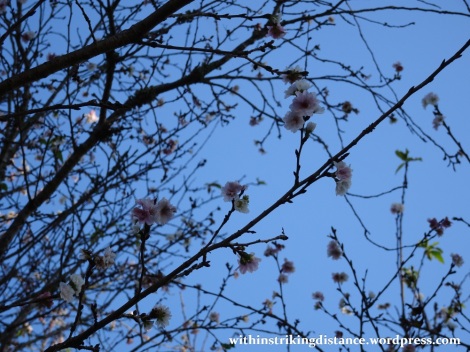 The seasonal splendours carried over into the tranquil grounds of Kikkō Shrine (吉香神社, Kikkō-jinja) in the northeastern corner of the park. There, I found a couple of ginkgo trees approaching their full autumn glory, with a great golden carpet of fallen leaves spread out upon the ground beneath them. 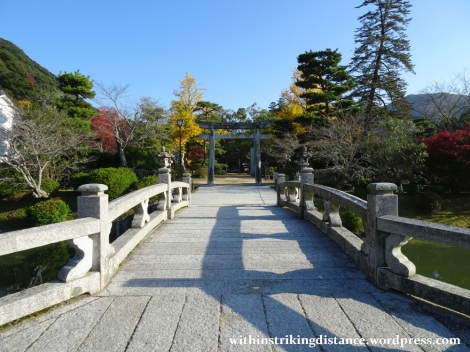 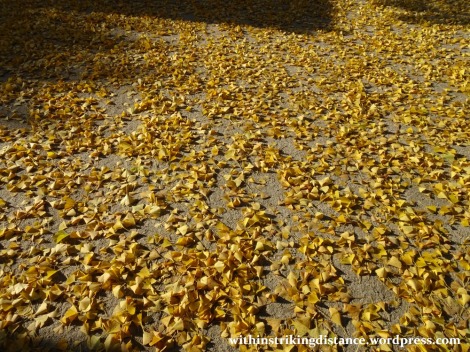 The ropeway soon opened for business, and before long it deposited me near the top of the soaring hill that overlooks the old town centre. Not far from the upper station, visitors are presented with a choice of two paths to the castle: one comfortably paved and easier to tread upon, the other perched right along the steep hillside and not quite as easy to negotiate (although it was tamped down and well maintained). There’s actually a good reason to follow the rough road, and indeed I chose it later for my descent – more about that in due course – but for the uphill stretch I settled upon the easier route.

And the visitor’s reward after all that effort? The small but magnificently sited main tower of Iwakuni Castle (岩国城, Iwakuni-jō).

Constructed in 1608, the original fortress lasted less than a decade before being dismantled on the orders of the central government. A concrete castle tower was erected to replace it in 1962, but on a different spot from that used for its predecessor – note that the former tower’s base still stands a short walk away.

As a history and castle enthusiast, I’d ordinarily take a very dim view of such liberties and inaccuracies, but I’m quite prepared to forgive this one…

…because the trade-off yielded one of the most fantastic views I’ve ever enjoyed from a castle.

Judge for yourselves, my friends. 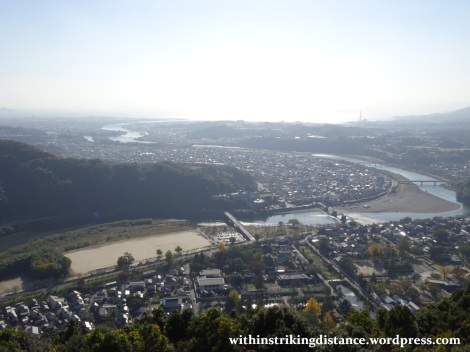 Before this visit, Inuyama Castle held the honour of having the best view from the top of a castle tower that I’d seen thus far. I still think the vista at Inuyama is quite impressive, but Iwakuni’s is pretty darned special.

And of course, this particular vantage point – combined with the right zoom lens – offers visitors a quite different take on Iwakuni’s iconic bridge.

On the way back down to the ropeway’s upper station, I decided to take the rougher hillside course. It might be a tad less pedestrian friendly than the path I took coming up, but it’s got something very special to offer for the true castle fan: long stretches of centuries-old ishigaki (stone walls). 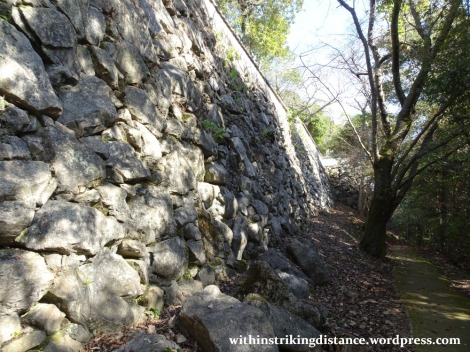 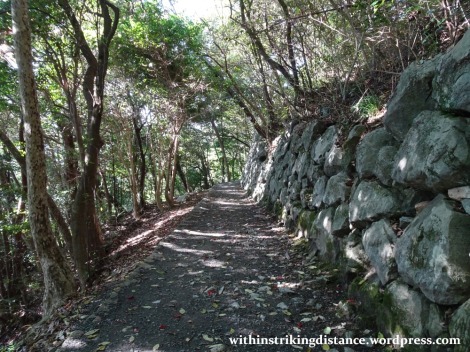 Now that was an absolutely worthwhile excursion, and I hope to return soon for a more thorough look at Iwakuni’s many attractions. But for the moment, it’s off to other places to enjoy other sights…

…which we’ll have more to say about in another post.