Having known from my previous autumn trips that late November is a better time for fall colours in large parts of central Honshū (except for higher elevations), I wasn’t expecting to see all that much at this early stage of my journey. Nonetheless, the kōyō wave had already begun to transform pockets of foliage in some parts of Kyōto, and on the fourth day of my 12th Japan adventure, I trekked out to a place in the southeastern part of the ancient capital where the trees had already begun to put on their glorious seasonal finery.

Autumn colours are usually my main point of interest when visiting Japan late in the year, but not this time. I had some quite specific targets of an architectural and historic nature in mind (mainly castles, predictably enough), so my itinerary and the timing of my visit were mainly oriented around these. That said, I learned one day that the leaves had begun to develop quite nicely at a certain temple nestled in the forested hills of southeastern Kyōto. Since I hadn’t been to that particular attraction before, the opportunity was ripe to kill two birds with one stone: tick one more Kyōto sightseeing spot off my to-do list, and enjoy a spot of momijigari at the same time.

From Kyōto Station, I travelled to Daigo Station on the Tōzai Line. I could have taken a bus the rest of the way, but the timing wasn’t right so I decided to hoof it. (Note that the map below doesn’t depict the precise route I took, but it should give some idea of the direction and distance involved.)

The journey wasn’t long in terms of absolute distance, but it involved a good deal of uphill walking, and before long I was sorely regretting my decision not to wait for the bus (or summon a taxi). Still, I kept heading up and pressed on towards my destination…

…the ancient temple of Daigo-ji (醍醐寺), in Kyōto’s Fushimi ward. Established in the 9th century A.D., the temple is one of 17 sites collectively inscribed on the UNESCO World Heritage list under the grouping “Historic Monuments of Ancient Kyōto“.

An unpaved, tree-lined approach led me to Daigo-ji’s main gate…

…the Saidai-mon, also known as the Niō-mon (after the two Niō guardian statues flanking the entrance). This towering portal was last reconstructed in 1605, though the Heian-era Niō on either side of the door – said to have been carved in 1134 and previously installed in a different gate – are older than the structure itself by nearly five centuries. 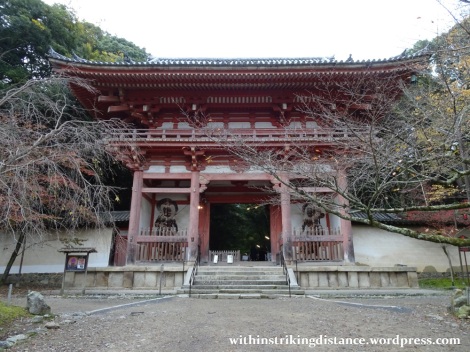 The Saidai-mon marks the entrance to the Garan (伽藍), the largest of three major enclosures that comprise Daigo-ji’s lower section, known as Shimo-Daigo (下醍醐). The upper section, consisting of various halls built around the summit of the mountain that rises behind Shimo-Daigo, is referred to as Kami-Daigo (上醍醐). It’s an hour’s walk up a rather steep mountain trail to the latter point, so those not particularly well-disposed to strenuous physical activity – myself included – might be happier confining themselves to Shimo-Daigo.

As of this writing, a combined ticket for all 3 areas in Shimo-Daigo costs 1,500 yen during the spring (20 Mar-15 May) and autumn (15 Oct-10 Dec) peak, or 800 yen outside these periods. The ticket is available from the reception window of the Sanbō-in enclosure, another area of Shimo-Daigo which I’ll write about in more detail later.

For the moment, let’s turn our attention back to the Garan. After passing through the Saidai-mon, I walked down a path lined with trees and towering stands of bamboo…

…and entered the heart of the Garan, one of the most prominent features of which is the towering Gojū-no-tō. Begun in A.D. 936 and completed some fifteen years later, this pagoda – an officially designated National Treasure of Japan – is said to be the oldest original building anywhere in Kyōto.

The Garan has several other structures that might be of interest to visitors, such as the Kon-dō (the temple’s main hall and also a National Treasure)…

…but I didn’t spend too much time on these, preferring to walk almost directly to the secluded pond at the back of the compound. Along the way, a few trees with nicely developed foliage offered a peek at what was shortly to come. 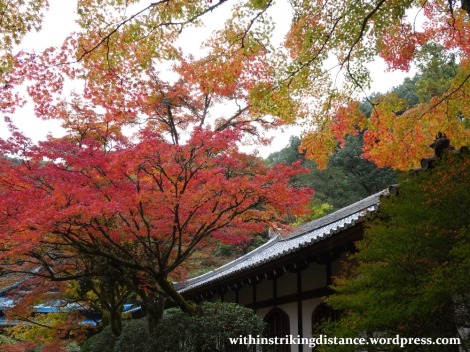 In due course, I arrived at Daigo-ji’s famed Benten-dō: a small shrine perched on top of a low, island-like hill partly surrounded by a pond. The building itself is of no particular historic or architectural importance…

…but the trees around it paint such a lovely picture, don’t they?

The foliage would be even more impressive around late November, though even at this fairly early stage – with swatches of green still tenaciously holding their ground against the onslaught of red and yellow and fiery orange – my walk around the pond was a veritable feast for the eyes. 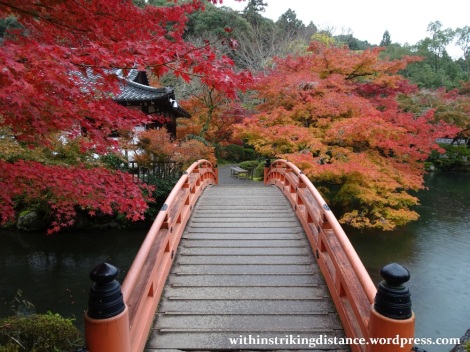 From the Garan, I walked a short distance to another of Shimo-Daigo’s enclosures, the Reihō-kan (霊宝館, literally “Hall of Sacred Treasures”). Roughly 100,000 artworks and artefacts accumulated by Daigo-ji through the centuries are preserved here, with only a very small portion exhibited to the public at any given time in its modern exhibition rooms.

Afterwards, I proceeded to the last section of Shimo-Daigo, a collection of lavishly decorated rooms and interconnected structures known as Sanbō-in (三宝院). Constructed in 1115 as a residence for the head priest, the complex that we see today dates from the late 16th century, when it was rebuilt on the orders of the powerful warlord Toyotomi Hideyoshi (1537-1598). The end result was a masterpiece of Momoyama Era architecture and landscaping: a worthy setting for Hideyoshi’s well-known Daigo-no-hanami, a large cherry blossom-viewing party for about 1,300 guests held on the fifteenth day of the third month of Keichō Year 3 (20 April 1598). Ironically, that was perhaps the last major hanami the warlord ever enjoyed, since he would die just a few months later. Every second Sunday of April, the temple puts on a reenactment of that historic event, featuring costumed participants and traditional performances.

Photography is strictly forbidden inside the palace-like main structure of Sanbō-in, but as soon as we stepped onto the low veranda next to its famous garden, a staff member announced that pictures of the outside landscape were permitted.

The first scene that greeted me was of an expanse of neatly raked gravel, at the far end of which was the black-lacquered gate known as the Kara-mon (a designated National Treasure). Erected in 1599, the gate was reserved for the exclusive use of representatives of the Imperial Court.

One can enjoy a closer and better look at the gate from the outside, since it opens onto the broad path leading up to Daigo-ji’s Saidai-mon.

I shuffled further along the veranda and, at last, my eyes fell upon Sanbō-in’s splendid landscape garden. I have seen many of its kind across Japan through the years, but this is beyond doubt one of the very finest I have ever gazed upon.

Since my words can hardly suffice to describe this horticultural masterpiece, I shall refrain from further commentary at this point. I invite you to follow along with the pictures below, which also include a few snapshots taken of certain sections in the east of the Sanbō-in palace-hall that I was able to access for an additional fee (the combination ticket alone will admit you as far as the lower veranda next to the garden). 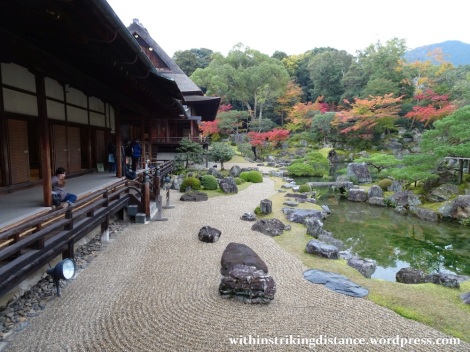 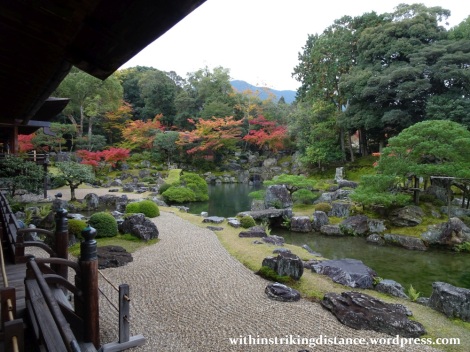 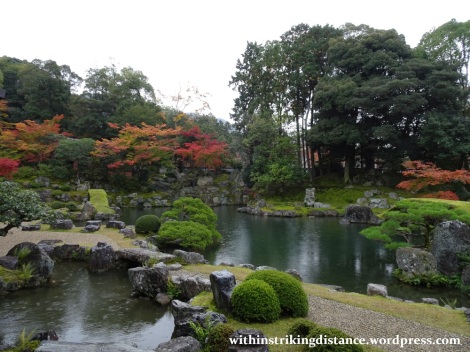 Now that was an absolutely rewarding half-day trip – one that left me with time enough to return to downtown Kyōto for lunch and a quick visit to my old friend, Nijō Castle. (I won’t write about that as I’ve blogged about the landmark before; see here for more about the castle.) By mid-afternoon, I was speeding along on the San’yō Shinkansen towards my next base: the city of Yamaguchi, my launchpad for an exploration of Japan’s Chūgoku region…

…which will, of course, be the subject of future posts.