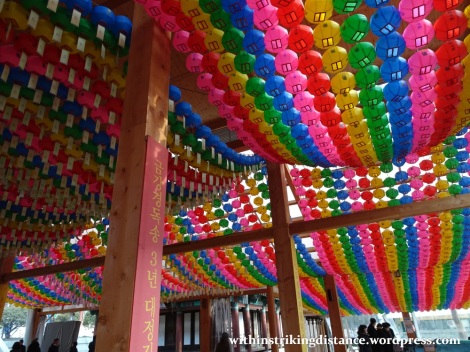 The experiences I’ve chronicled in this post took place exactly one year ago, but I still remember that day quite vividly. It’s amazing how fine architecture and tasty treats – with a drop of hot soup in between – can work in concert to render a tiny episode in one’s existence almost indelibly memorable.

And what else do I remember of that day? Oh, that it was freezing cold. (As is typical of winters in Korea, of course.) Fortunately, one is never short of ways to warm up on a chilly day in Seoul.

First, let’s turn up the heat with an invigorating morning stroll, and appreciate some fine architecture whilst we’re at it.

As a rigorously traditional Catholic, I’m quite clear in what I believe in and whom I pray to. My regular journeys across (and very deep affection for) Japan and Korea haven’t stoked any personal interest in Buddhism, despite the influence that this movement has had on the societies of both nations. That said, I’ve developed an appreciation for the purely artistic and architectural aspects of this part of Korean culture, and on the penultimate morning of my holiday I was eagerly looking forward to visiting Bongeunsa, in Seoul’s Gangnam district.

Mercifully, I’ve been spared the appalling torture of seeing/hearing the entire viral video/song that propelled the word “Gangnam” into global infamy a few years ago (and perhaps not for the right reasons). Where I’m concerned, the Gangnam district is simply a swank, perhaps overvalued chunk of real estate on the southern bank of the River Han – hence the name, “gang (river) + nam (south)” – known more for gleaming skyscrapers such as those lining Teheran-ro than for anything of a historic or cultural nature. For that reason, I never bothered to visit this part of Seoul in any of my previous trips, but after reading about Bongeunsa I decided the time was ripe to finally tick the district off my to-do list.

Founded in the late 8th century A.D., the temple was reestablished at its current site in 1562. Most of the structures in the compound are of fairly recent vintage, the originals having been consumed by fire and warfare, but a suitably archaic style has been maintained in the rebuilding. Indeed, a quick glance back through the front gate suffices to establish a stark contrast between the low and ancient-looking buildings within the grounds, against the soaring contemporary towers of glass and steel without. 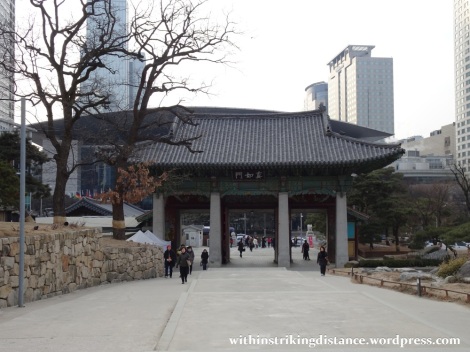 Now then, time for that invigorating morning stroll. Bongeunsa isn’t particularly large, and a little over half an hour was enough for me to see at least the major features. 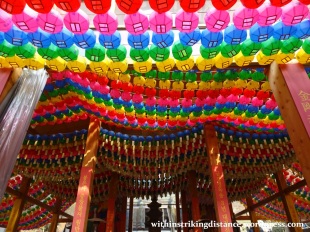 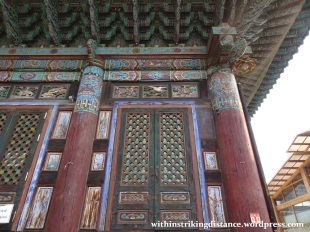 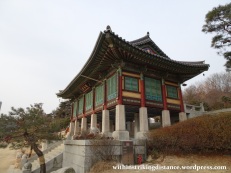 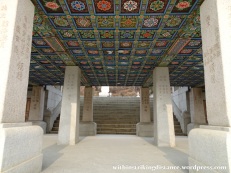 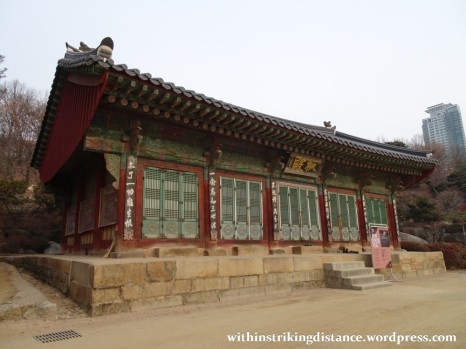 Mmmm, now that was refreshing. But with the mercury still hovering quite low, let’s try something else for a bit of warmth. Care for a drop of hot soup?

With the morning walk done, I returned to nearby Bongeunsa Station (Subway Line 9) and began the journey to my next stop of the day. The long Seollal weekend was still very much in progress, and with a large chunk of the local population having abandoned the Korean capital for their ancestral provinces, I had the train almost entirely to myself. 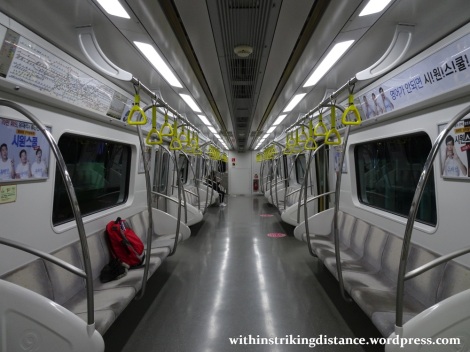 Ahhh, pure bliss. I wish my daily commute were like this.

Alas, my solitude didn’t last for very long. Less than an hour after leaving Bongeunsa, I found myself in the thick of boisterous holiday crowds at Namsangol Hanok Village.

I’ve written about this attraction before, so I won’t go into detail about what a visitor can expect to see in this open-air museum of old Korean houses. (For more pictures and information, read about my previous visit here.) I chose to come back this time because the village normally puts on special activities during the major Korean holiday periods – specifically Seollal and Chuseok – and I wanted to experience some of the festive cheer.

Oh, there was festive cheer all right … along with people. Hordes of them. 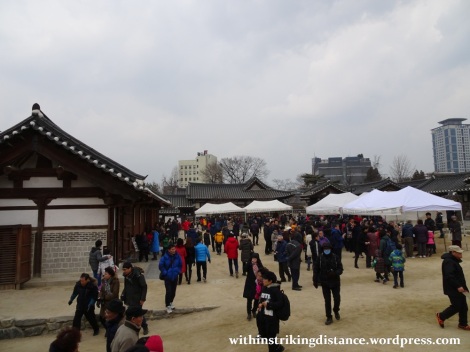 I hopped from stall to stall, sampling the Seollal merchandise (mostly of an edible sort, of course) and observing the special activities like arts-and-crafts sessions. There was also a series of performances at the plaza near the entrance, covering everything from fast-paced drumming to feats of strength to traditional games.

Shortly before noon, I queued up at a ticket booth to claim a free stub for a small portion of freshly cooked tteokguk: a local dish made with sliced garaetteok (cylindrical rice cakes) simmered in a meat-based broth. Traditionally eaten on Seollal, this special holiday treat held another appeal for me that had little to do with ancient custom: it was served piping hot, thereby offering temporary relief from the viciously low temperatures of that winter day. 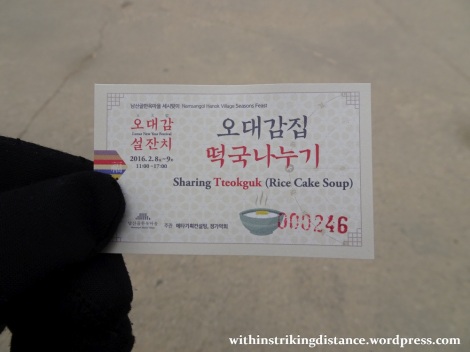 Now that soup was just what the doctor ordered … but we’ve been outdoors all day and a bit more warmth would be much appreciated. Hot tea and porridge, anyone?

After a brief interlude of unremarkable sightseeing – not really worth writing about – I decided to end the day by poking around amongst the shops and cafes in Insadong.

I’m not much of a shopper, but this pleasant pedestrian-friendly street is usually good for a nice stroll … unless one chances upon the place just when the crowds are suffocatingly thick. It’s also one of my favourite places in Seoul for picking up decent souvenirs, whether it’s questionable touristy kitsch or top-calibre local artistry I’m after (there’s a time and place – and person – for either kind).

Just one picture to share of the street on this occasion; click here to see more images taken on a previous visit. 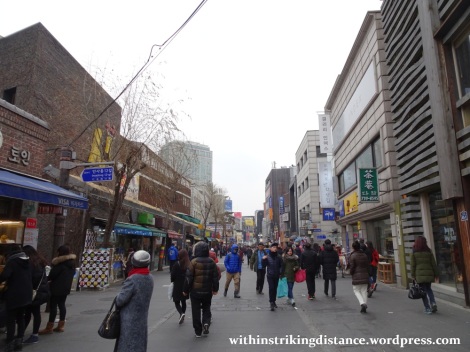 Many of the establishments in this densely packed corner of Seoul are of the compact, roadside-storefront variety. A couple of shopping centres have made their appearance in recent years but they’ve kept a low profile, quietly tucked away behind the smaller buildings lining the street. Next to one such miniature mall… 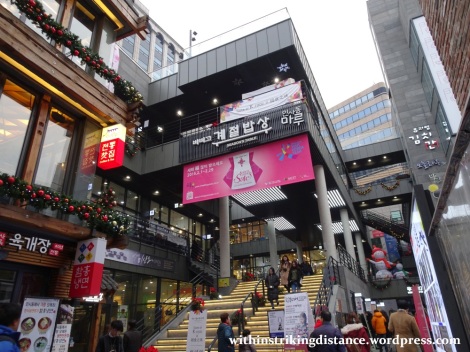 …I spotted a flight of steps leading up to a second-floor cafe named Insamaru. The hot beverages on the menu posted near the door piqued my interest, so I headed up to give the place a try. 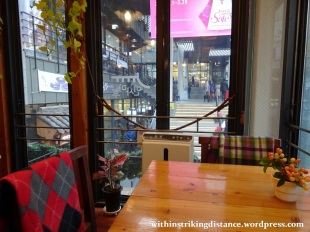 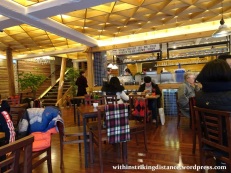 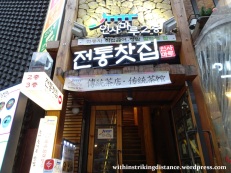 I parked myself at a corner table with a view of the alley below. (Not a bad spot for casual people watching, I might add.) From the menu, I ordered a bowl of danpatjuk (sweet red bean porridge) and some hot daechucha (jujube tea). 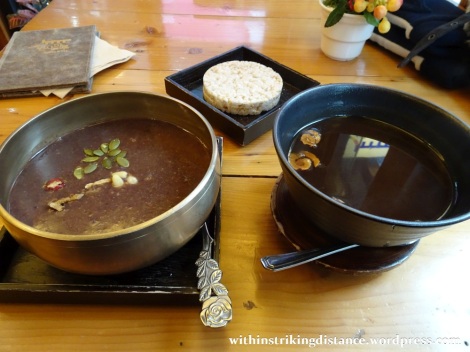 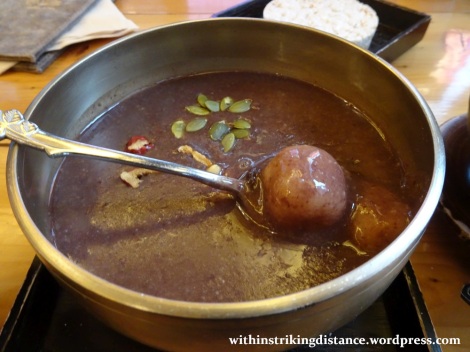 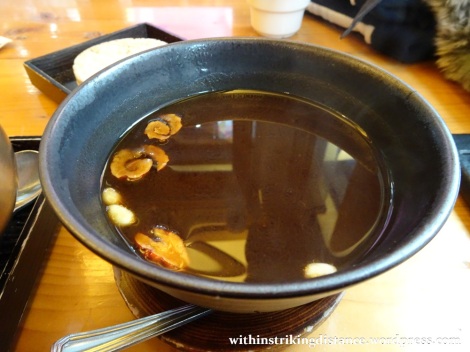 With this delightfully hot and sweet finish, I called an end to another fantastic day in Seoul. A final day of sightseeing lay ahead before I was forced to bid a reluctant farewell to one of my favourite corners of the world … but let’s save that story for another post.