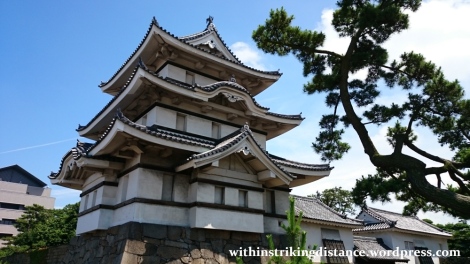 Sometimes, it takes a bit of work to seek out the historic gems scattered across your typical Japanese metropolis, hidden as they are behind decades of unrestrained development and bland concrete modernity. But here in Takamatsu, a short stroll from the central railway station is all a visitor needs to discover one of the city’s most precious cultural treasures.

First, a reminder of our present whereabouts.

After spending the morning at Takamatsu’s splendid Ritsurin-kōen garden, I doubled back to the old city centre near the main railway terminal. The area around the prefectural capital’s transport hub had seen a fair bit of redevelopment over the past couple of decades, but I wasn’t there for the slick new buildings or pedestrian-friendly promenades. No, I was in pursuit of something far older … and quite conveniently located just to the east of JR Takamatsu Station.

Begun in the late 16th century by the Ikoma clan, Takamatsu Castle (高松城, Takamatsu-jō) served as the main residence and administrative headquarters of the Lords of Takamatsu Domain right up until the end of the Edo Period. Even after the Ikoma were ejected from their lands and replaced by the Matsudaira family, this seaside fortress continued to be maintained and improved, in due course even becoming part of one of Japan’s infamous “lists of three” – more specifically the list of Three Great Water Castles (三大水城, Sandai Mizujiro).

The west gate was an easy walk from JR Takamatsu Station, but I decided to bypass that entrance, instead veering to the north and heading east along the castle’s sea-facing wall – all the better to appreciate some of its surviving fortifications.

…I came across a long stretch of stonework rising above what almost seemed like a canal. Back in the Edo Period, long before modern development spurred the reclamation of land along the coast, this wall would have directly faced the sea, and at high tide the waves would have lapped up right against the stones at its base. 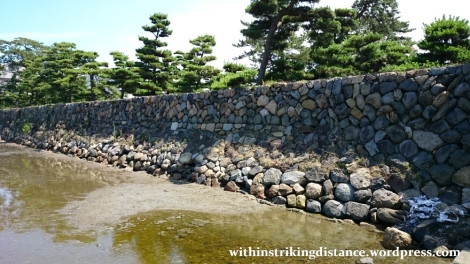 The “canal” is all that remains of the ancient waterfront, now reduced to a mere sliver by the wide stretch of landfill and concrete laid down between it and the sea. Nonetheless, I’ve read that the reclamation was carried out (or perhaps subsequently altered) in such a way that at high tide, the water still comes up to meet not just the old wall…

…but also one of the castle’s few remaining Edo Period structures, the Mizute-gomon gate, which formerly allowed direct access to the sea. This gate is overlooked by another rare survivor from the castle’s heyday: the soaring Tsukimi-yagura watchtower, which along with the Mizute-gomon and the adjoining Watari-yagura is an officially designated Important Cultural Property.

Most of Takamatsu Castle’s former moats and walls have been filled in or levelled, but as I followed the line traced by the old fortifications, it soon became clear that substantial portions have survived to the present day. A long stretch of preserved stonework ran behind and across a compound of modern buildings, with enclosed passageways cleverly positioned overhead to connect the new structures without having to tear down or cut through the ruins.

As I rounded a corner, I spotted the former site of one of the castle’s watchtowers, the Ushitora-yagura. Interestingly enough, even though nothing presently stands upon this forlorn stone platform… 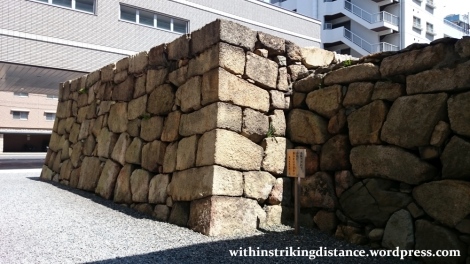 …the wooden tower itself is actually still intact, having been taken apart and reassembled in the 1960s on the former base of the long-destroyed Taiko-yagura.

At this point, I finally crossed into the castle grounds, entering by way of the Asahi-mon gate in the southeast corner.

Near the centre of the compound stands a large wooden mansion known as the Hiunkaku. There was once a sprawling palace in this area – as is typical of Japanese castles – but it was torn down during the Meiji Era. In the early 20th century, the head of the Matsudaira family (the former rulers of Takamatsu Domain) ordered the construction of the building we see today, which was completed in 1917. 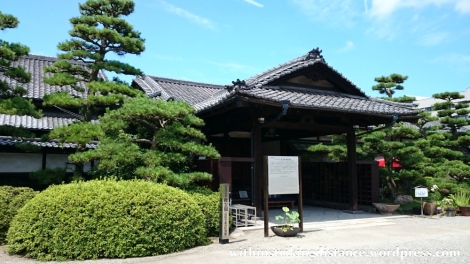 I then proceeded along the inner edge of the castle’s seaside wall, into the Ninomaru enceinte, and made my way towards the Honmaru (the innermost enclosure) by crossing the wooden Saya-bashi bridge. 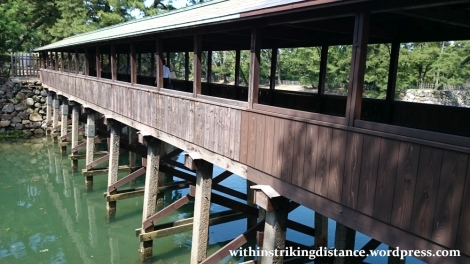 The key feature of the Honmaru is the tenshu, or main tower … or at least it was the key feature before the structure was demolished in 1884. All that’s left is the enormous stone base on which the tower once rested, newly restored (an old shrine that once stood on top having been removed) with the foundation stones for the tower’s wooden pillars exposed. 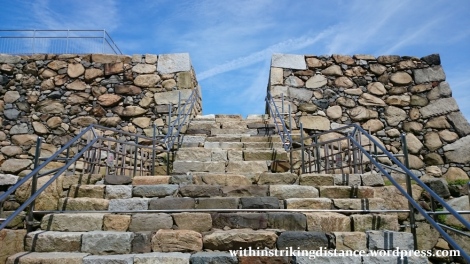 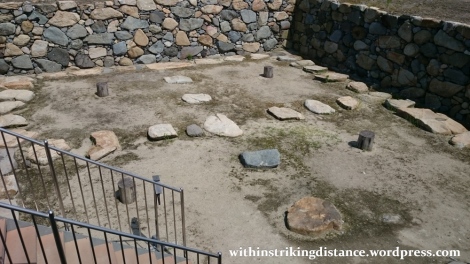 There’s not much to see yet, at least not until the local government finally gets around to rebuilding the tenshu that once stood here, but I did enjoy great views of the compound from the top of the stone base.

And with that, my brief visit to Takamatsu was over. Indeed, this particular 15-day trip across Japan was pretty much over as well, with not much to show for my last morning the next day (a noon flight meant there wasn’t much time for last-minute sightseeing). Now I’m ready to write about other adventures that came after this one, with Japan (of course) and Korea as the beautiful backdrops to my journeys…

…but let’s save those stories for another time and another post.