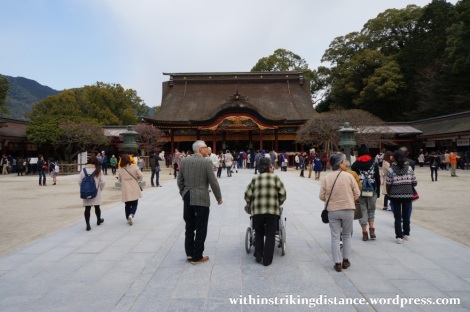 Fukuoka may be the nexus of power and prestige in modern-day Kyūshū, but over a millennium ago, that distinction belonged to another city located several miles to the southeast. Although reduced to a quiet suburb of the island’s sprawling present-day capital, one might say that Dazaifu merely traded one cloak for another: transforming from a seat of imperial power to a centre for culture and history in southern Japan.

Getting from downtown Fukuoka to the centre of Dazaifu is a relatively straightforward affair. About 30 minutes (give or take) on a Nishitetsu train (one or two), and you’ll find yourself just 400 yen poorer at the end of the journey.

400 yen poorer … and incredibly wealthier in the history, knowledge, and culture you’ll have soaked up before the day is done. A very good trade by any standard.

I wrote a detailed account of my train ride in a separate post. A couple of other options are available, all of which are described in detail on the ever-helpful Japan Guide website.

Whatever mode of transport you choose to take, Daizaifu’s proximity to Fukuoka – as illustrated in the following map – makes it an easy and worthwhile day trip destination from the prefectural capital.

There are several points of interest scattered across Dazaifu, but I limited myself on this occasion to a number of attractions in the eastern part of the city, within walking distance of the railway station.

My first stop of the day was an easy stroll northeast of Dazaifu Station. 8 minutes on Google Maps, perhaps a bit more in reality … possibly a LOT more if one allows oneself to be distracted by the inviting shops and cafés sprinkled along the well-trodden, pedestrian-friendly route.

Assuming one safely makes it through the gauntlet of cash-draining temptations on either side of the stone-paved main path, framed by hulking torii and flanked by some rather scrawny trees… 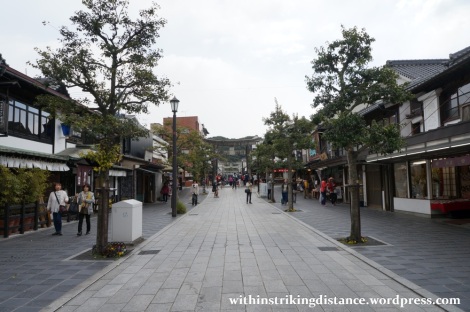 …one eventually reaches the sacred precincts of Dazaifu Tenman-gū (太宰府天満宮). Dedicated in A.D. 905 to the Heian-era scholar and statesman Sugawara no Michizane – who was deified as a patron of education under the title Tenman-Tenjin – this sprawling shrine was destroyed and rebuilt several times in the course of its long history; the main hall, for example, is relatively young at its age of a mere 424 years. 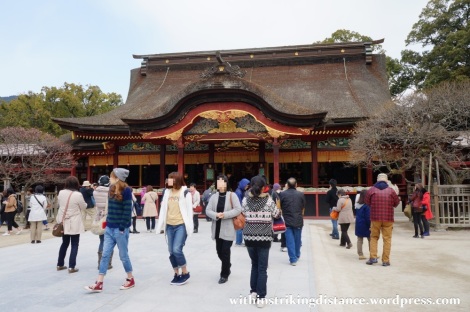 Because of Michizane-a.k.a.-Tenjin’s traditional association with learning, this and other Tenman-gū shrines elsewhere in the country (including the famous one in Kyōto) are quite popular with students, especially when it’s time to sit their exams. This fact also explains away the polished gold tint on the snouts and horns of the shrine’s bronze bulls – burnished over the years by the reverent rubbing of countless grade-chasing pupils. 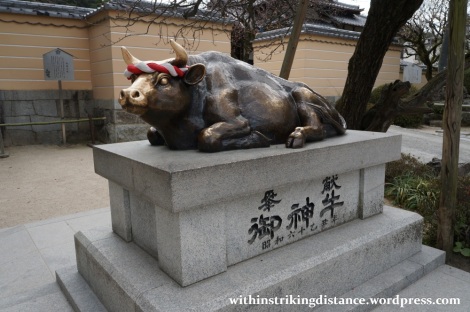 Although better known for its flowering plum trees, which would have looked their best just a couple of weeks or so before my visit, Dazaifu Tenman-gū also has a few sakura trees on its grounds. The ones I saw were probably only days away from reaching full bloom.

My next stop is half an hour away on foot from here if, IF, one trusts Google Maps unreservedly … which of course one shouldn’t do. (Not a scathing criticism of this most useful tool, mind you; just a friendly note of caution.) Until such time as the map data is updated, you’ll probably see the default route inaccurately depicted below as a long, circuitous path that takes one north, then east, then south…

…when in fact, all one needs to do is walk a short distance to the open area in the southeastern part of the shrine compound, towards the long structure near the centre of the aerial view below…

…which marks the start of a sheltered, climate-controlled pedestrian tunnel equipped with escalators and travelators… 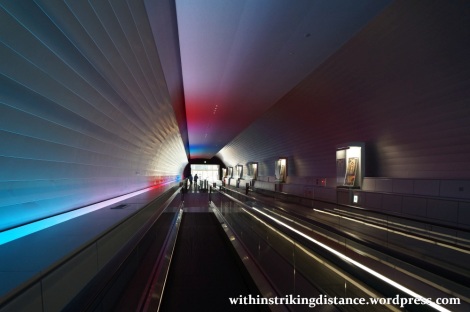 …all designed to see you safely, swiftly, and comfortably through to the massive building perched on top of a nearby hill: the gleaming, strikingly modern home of the Kyushu National Museum (九州国立博物館, Kyūshū Kokuritsu Hakubutsukan).

More than a mere roof over the institution’s massive collection of artefacts and archaeological relics from various periods of Kyūshū’s history, the building (opened in 2005) is almost an attraction in itself, with its soaring architecture and towering glass walls that showcase the museum’s attractive natural setting.

From here, it was a long but manageable walk under cloudy skies – and through a light dash of rain – to my last stop in Dazaifu … something that’s worth saving for another post.

Till then, gentle readers, cheerio.