In a cold, lonely outpost between two warring halves of the same country, there is plenty of silence – but very little peace.

After lunch, our tour party was reorganised into two smaller groups. For some, Imjingak was the last major point of interest on what was just a half-day excursion out of Seoul. After a brief period at leisure to check out the other attractions around the visitors’ centre, the bus would take them back to the Korean capital and the end of their journey.

As for the rest of us, we were only halfway through a full-day tour, so we were instructed to report to a different bus at a specified time. Until then, we were free to roam around Imjingak – and there was quite a bit to see besides restaurants and souvenir shops.

Visiting the DMZ can be a little tricky for Korean citizens, but Imjingak, which sits just outside the secure area controlled by the military, can be visited without requiring special permission. Over the years, the site has accumulated various monuments and other items of interest that have, in various ways, made the frontier a bit more accessible (albeit symbolically) to local residents. For example, not far from the visitors’ centre stands Mangbaedan – an altar oriented towards North Korea where refugees could offer traditional ancestral rites in place of the family graves and shrines that they were forced to leave behind.

A short walk away, standing over a rather beautiful sunken garden with a pond and wooden pavilion… 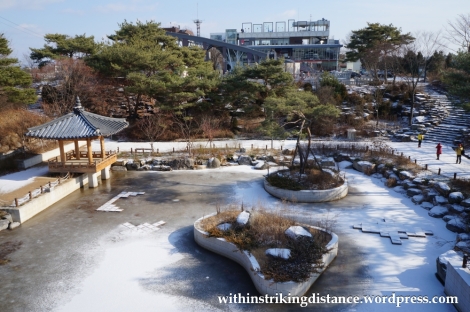 …is a wooden footbridge that leads to a closed gate. Beyond that gate is a railway line that continues northwards across the river, via the so-called Freedom Bridge – named for its role in facilitating the transport of thousands upon thousands of prisoners back to home territory after the end of the Korean War. There are actually two bridges that cross the Imjin River at this point, one of which was left an unrestored ruin after war’s end; you can still see the concrete supports of that other span in one of the photographs below.

For Koreans, this gate probably serves as a powerful reminder of the painful division that their country went through, and many of them have left behind messages signifying their earnest desire to see the peninsula reunited. 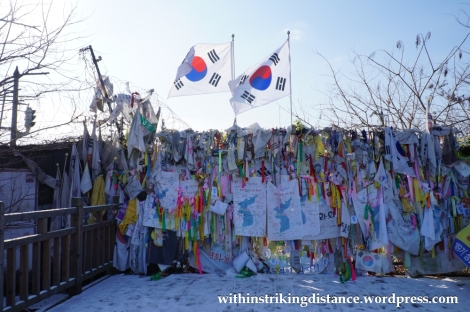 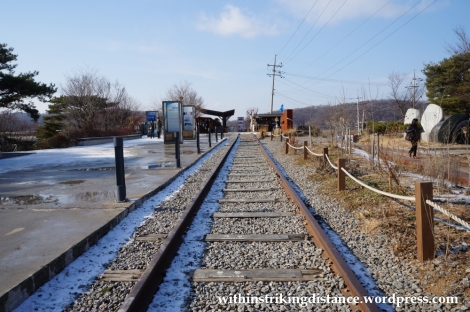 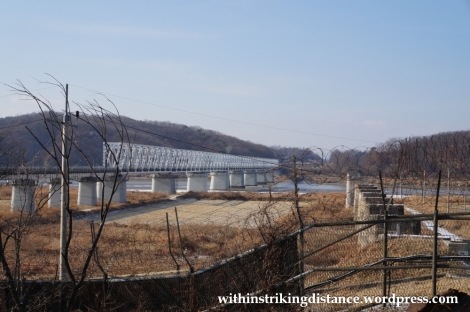 As the appointed assembly time drew closer, I headed up to the observation deck above the roof of the main Imjingak building for a last look at the surrounding area.

Not long afterwards, I was travelling back across the Imjin River into the Civilian Control Area, this time in a different bus with a different tour group managed by the same company. Some of those from the morning party were here as well, but many of the faces were new. As we entered the restricted zone, a ban on picture-taking was announced: regrettable but understandable, given the extremely sensitive security arrangements surrounding our next destination.

We were on our way to Camp Bonifas, a military installation located just a few hundred metres away from the DMZ itself. This is the main entry point for tours of the Joint Security Area (JSA), and it’s where all visitors receive a mandatory briefing from the United Nations soldiers – or, to be precise, U.S. and Korean soldiers serving with the U.N. – that’s meant to prepare them for what lies ahead. During the briefing, we were asked to sign the infamous DMZ waivers that, in essence, absolves the U.N. Command from any liability in case we get our limbs blown off or our heads vapourised by enemy fire during our visit to what is, after all, effectively still a war zone.

With its proximity to North Korea, and to the hordes of North Korean armed divisions massed along the frontier, the camp’s motto “IN FRONT OF THEM ALL” certainly didn’t strike me as being too far off the mark.

After passports were inspected and lists checked off, we boarded two military buses which had special permission to travel within the DMZ. Each bus was accompanied by an American soldier who would act as both guide and minder. The journey to the JSA took us through eerily peaceful landscapes – no doubt very heavily mined – featuring forested hillsides and barren fields sleeping under a coverlet of snow … none of which I could take pictures of due to the ban that was in place. Under the watchful gaze of the young army officer, I made sure to quash even the slightest inclination to sneak a snapshot, and the beautiful scenery composed of shades of brown splashed with white, set against a brilliant blue backdrop, must sadly remain preserved only in my memory.

The ride was short; I can’t recall exactly how long it took but it was probably less than half an hour. The snow-covered paddies and unkempt forests gave way to a small area of diligently swept pavements, carefully tended shrubbery and imposing concrete structures, dominated by a gleaming four-storey building that wouldn’t have looked far out of place in downtown Seoul – except that this was as far a place from downtown Seoul, in atmosphere if not in distance, that one can possibly imagine.

We were now within the confines of the Joint Security Area, also referred to as Panmunjeom – after a nearby village where the armistice that put the Korean War on hold was signed – and probably the only place along the tightly guarded frontier where civilians can routinely come within a literal stone’s throw of North Korea.

Not that you’d want to do any actual stone throwing here. Toss so much as a grain of sand into the wrong side of the border and you’ll probably risk a bullet to the head.

A brief note on the Google Maps view below: as of the time of this writing, the border between the two Koreas appears to have been inaccurately drawn a little too far south of where it should be. Look at the small row of blue and white structures in the centre – the boundary should run right down through the middle of those buildings, as depicted on this map of the JSA.

To keep my post at a reasonable length, I’ll hold back from discussing the history of this very special corner of the world, though I do recommend reading up on that as it’s quite a fascinating story. Wikipedia isn’t the most detailed of sources, but it’s a decent enough starting point for further study.

We were ordered to form two groups and marched, two abreast, through the so-called Freedom House: the modern glass and steel structure that acts as the centrepiece of the South Korean half of the JSA. Under the supervision of our military escorts, we emerged on the other side and finally got our first look across the border – as well as permission to whip out our cameras and start snapping.

So long as we kept our lenses pointed in the direction of North Korea, that is. Taking pictures of anything in a southerly direction was strictly forbidden, presumably in the interests of security.

Note the thin line of concrete set into the ground in the middle of the pictures below. Everything beyond that, including the stark concrete building in the distance, is standing on North Korean soil. 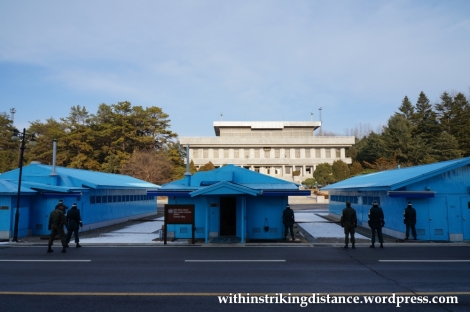 After a brief, carefully timed photo op, we were herded into one of the blue U.N. conference rooms straddling the Military Demarcation Line (MDL) – the boundary that was drawn between the warring sides after hostilities ceased in 1953. The MDL itself was physically visible through one of the conference room’s windows: a flat strip of dull grey concrete, with North Korea on the left side and South Korea on the right.

The border ran right through the room and down the middle of the long conference table, its position unmarked but outlined by the row of microphones and by the South Korean soldier standing on top of the frontier. We were free to cross the boundary, so long as we didn’t try to walk out of the door on the wrong side of the building (which was in any case securely guarded by another soldier). With that freedom came the opportunity to stand, briefly, technically, within North Korean territory. 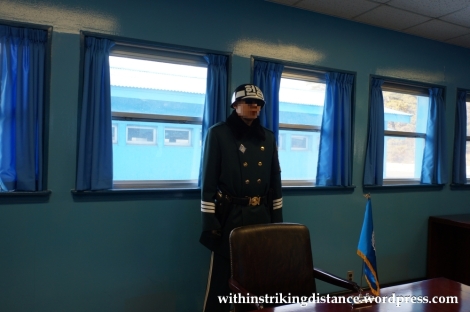 Before we knew it, our time was up, and we were escorted to our military buses for the journey back to Camp Bonifas. Along the way, we were allowed to take pictures (from within the bus) of a small monument on the side of the road, set up to commemorate the so-called Axe Murder Incident of 1976. 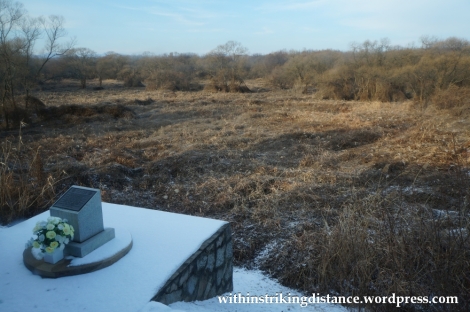 A little later, permission was granted for us to take photographs within the DMZ one last time – the target in this case being the infamous Bridge of No Return.

Soon, we were rumbling back through the DMZ on our way to Camp Bonifas. At one point, we caught sight of both of the massive flagpoles that the two Koreas had set up on their own sides of the border: one in the southern village of Daeseong-dong, the other in the northern village of Gijeong-dong. This scene is probably the one I most sorely regret not being able to take a picture of … the sight of those two flags hoisted by two bitter enemies, only a mile or so apart but worlds away from each other, seemed to highlight the division of Korea more powerfully than anything else I’d seen today.

Reunification might seem like a hopeless dream after all that has happened in the last half century, but it’s a dream that even this passing stranger hopes he might yet live to see fulfilled.