Without a doubt, the National Palace Museum ranks amongst the finest institutions of its kind anywhere in the world. Having said that, I know of one other museum in Taipei that probably outranks it in almost every sphere of interest – whether it be art, or history, or architecture.

A museum that charges no admission fees and keeps no closing hours, where the exhibits can be touched and photographed without fear of reprimand, where patrons have whole streets lined with restaurants for cafeterias and sprawling night markets for souvenir shops.

That museum happens to be none other than the city of Taipei itself.

With a little imagination, it’s not such an outlandish idea. Streets for corridors. Markers and monuments for display labels. Real buildings for exhibits. An entire city’s worth of people for tour guides.

And of course, metro lines for lifts and escalators – which was precisely what I needed when I headed downtown after my morning excursion to the National Palace Museum.

I began my long walk across the city at Exit 1 of Longshan Temple Station.

The first landmark on my route should be quite apparent from the name of the subway stop where I started. Originally established in 1738, and rebuilt or restored several times over the course of the centuries, Longshan Temple was a veritable assault on the senses in an otherwise bland urban setting. Consider the contrast: in the midst of unremarkable concrete sprawl, one finds a remarkable riot of architectural detail and intricate stonework, colourful dragons and gleaming roof ornaments, all surrounded by clouds of incense and the scent of floral offerings. 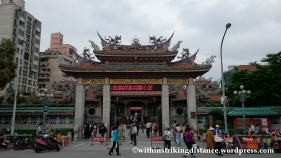 From the temple gate, a short stroll through shop-lined streets brought me to the Bopiliao area…

…which featured a cluster of old brick buildings and arcades left over from the last years of the Qing Dynasty and the early years of Japanese rule.

I can’t say I’m a fan of graffiti art, but I suppose these aren’t such a bad fit in this particular setting. 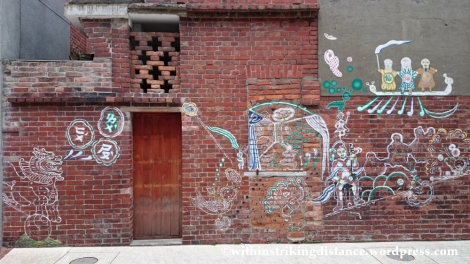 The next stop was a couple of blocks away. Bear in mind that my real path was somewhat different from the system-generated route depicted on the map below. Rather than cutting my way up straight from Bopiliao, I actually doubled back all the way to the western edge of the Longshan Temple compound, then headed north from there.

A short distance west of this decorative arch…

…was the small yet incredibly colourful precinct of Qingshan Temple, dating from the mid-19th century. The structure was undergoing restoration work at the time of my visit, but the ladders and the equipment did little to dull the experience.

I then headed east towards Qingshui Temple.

The immediate surroundings reflected what now appeared to be a common theme running across most of the city’s temple population. An old, very traditional-looking compound, hemmed in on all sides by urban sprawl.

Indeed, to reach Qingshui Temple I had to pass through a gate flanked by low-rise shop buildings…

…at the end of which stood the front porch of the temple compound. Qingshui was founded in 1787, and that antiquity was reflected in the rich classical architecture of the facade.

Following Changsha Road, I walked further to the east, passing some old brick storefronts squashed between newer concrete and tile buildings. I had no idea exactly how old these shops were, or which period they were built in (probably the pre-war Japanese era), but the sight of these ageing facades and their delicate features – note the floral motif decorating the sima near the roof – helped add a bit of visual spice to the bland urban landscape along this street.

In due course, I arrived at a small landscaped park where the Xi Ben Yuan Temple once stood. Constructed in stages from 1922 and dedicated as the Nishi Hongan-ji, this temple was the local branch of its namesake in Kyōto and one of the largest of its kind to be built in Taiwan during Japanese rule. After the Japanese colonial government was expelled from the island in 1945, the temple compound suffered from decades of neglect and reuse, with a disastrous fire in 1975 effectively clearing the way for squatters to take over the once sacred grounds. A major preservation project that saw the removal of illegal structures and the restoration of some of the former temple buildings was completed in 2012, leaving the city not only with a new public space for its inhabitants to enjoy, but also a lasting reminder of its long and often painful history.

…I arrived at the so-called Red House. This octagonal structure dates from 1908 and was originally built as a public market, but now serves as a theatre and cultural venue.

I say, this whole selfie craze is getting out of hand – even the statues are doing it.

We’ve still got a long way to go in our walk across the historic heart of Taipei, so let’s call a quick break and pick up from here in the next post. But first, let’s have a visual recap of the ground we’ve covered so far (note that the actual routes I took are not identical to the path plotted by Google Maps):

About half a dozen landmarks, representing nearly two centuries of Taipei’s cultural heritage and history. Not a bad start.