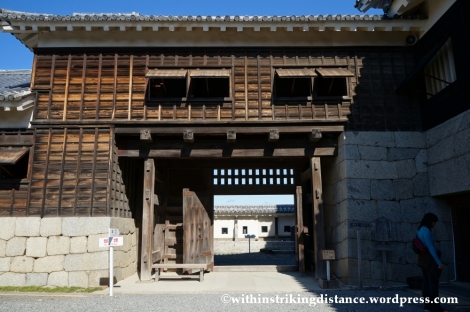 All right, I’ll admit it: I’m a castle nut. Not once in my several visits to Japan have I ever failed to visit at least one of these striking symbols of the country’s feudal history, and on several occasions (such as here and here) I didn’t hesitate to invest hours of travel time just to see some castle or other.

I’m also a man on a long-term mission: that mission being to visit every single one of the 12 castles that have retained their original tenshu, or main tower. There are scores of castles dotting the landscape across Japan, but most of these have lost their original structures to war, time, calamity, and – perhaps the most destructive of all – a wave of forced demolitions carried out by the Meiji government after the fall of the Tokugawa regime. Amongst the nearly two dozen castles I’ve visited so far, seven are originals (including the one described in this post), which leaves five more . . . after which I can set my sights on completing a certain well-used and much longer list.

With this sort of background, it should come as no surprise that my main target for today was the mighty fortress at the heart of Matsuyama City. Of course, I fully intend to go on a longer, more in-depth exploration of Shikoku sometime in the not-too-distant future – it’s just that this particular visit was focused on one attraction.

After a long train ride from distant Ōsaka, I disembarked at JR Matsuyama Station and sought out a tourist information counter, where I obtained a map and bought a 400-yen day pass for the city’s tram network. Less than half an hour later, I was on my way. 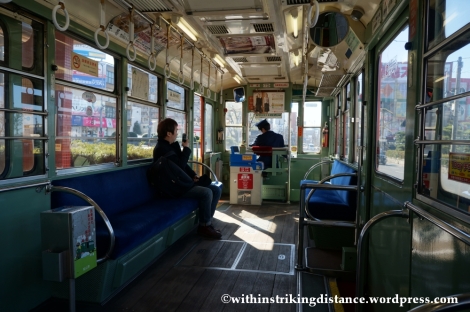 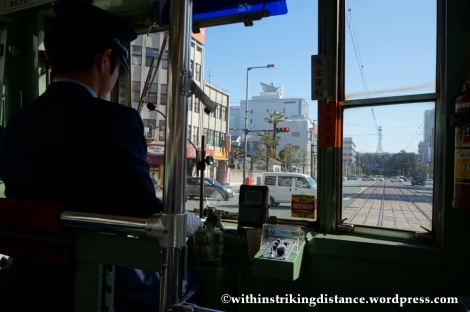 I love trams. Not quite trains, not quite buses, but occupying a nebulous niche somewhere in between. They run on rails but stop at traffic lights. Noisy, ancient, and incredibly atmospheric. They may not be particularly loved in places like Tōkyō (which has ripped up all but two of its own lines), but they seem to be doing well enough in other parts – Nagasaki in particular has an extensive network – and I hope to see them still rumbling along on their rust-streaked, stone-lined tracks long into the future.

After a short ride, I got off at the Ōkaidō stop and started walking northwards, up along a sloping street . . .

. . . towards the boarding station for the ropeway that will take me up to Matsuyama Castle. 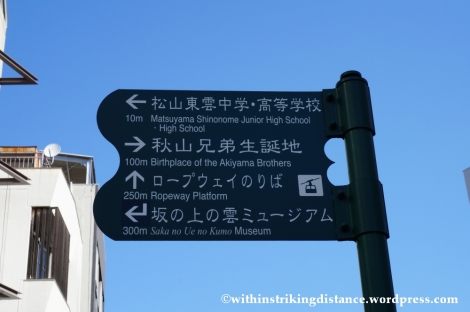 At the station, you’re faced with two options: the unobstructed views of an open-air chair lift, or the sheltered comfort of roomy cable cars.

I’m a bit of a scaredy cat, so the prospect of dangling from a wire in a plastic chair with one’s legs hanging over a long drop didn’t seem particularly appealing at the time. I went with the obvious choice. 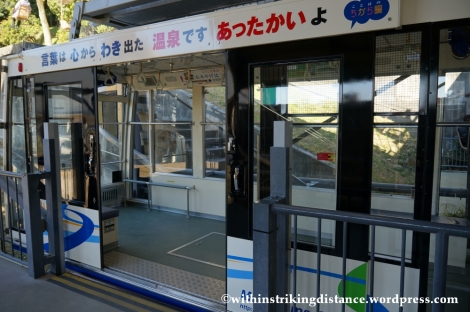 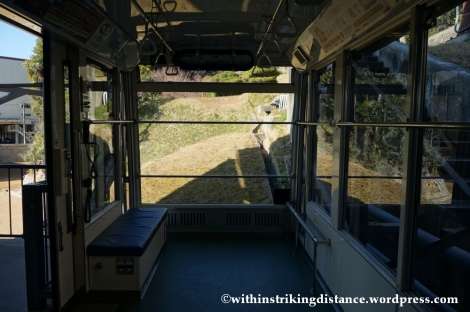 After I got off at the other end and began my uphill walk towards the summit, it didn’t take long before the first remnants of the castle’s formidable defences came into view. 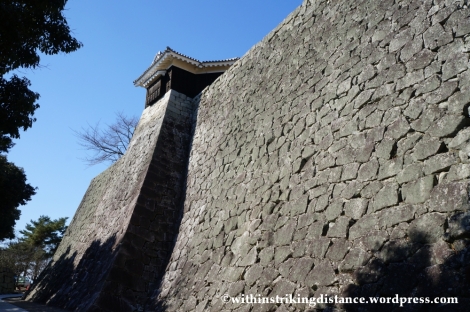 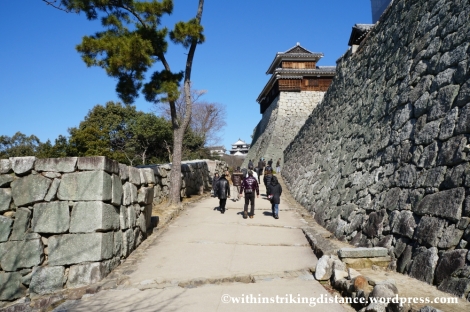 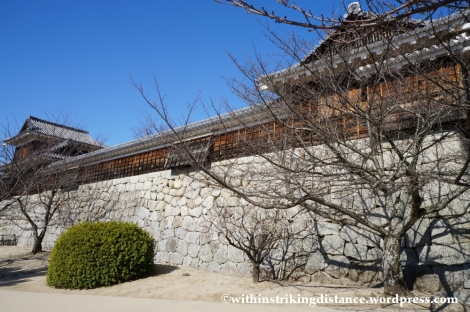 There was a bit of restoration work going on at the time, which meant that one of the castle gates was shrouded in scaffolding . . .

. . . although it didn’t do much to spoil the view, either of the castle itself or of the surrounding landscape.

Speaking of which, there were a couple of viewpoints along the way that offered impressive vistas of the city below us.

The path eventually brought me to an open space near the castle’s innermost enclosure. Looking over the side, I caught a glimpse of the complex of buildings at the heart of this enormous fortress. 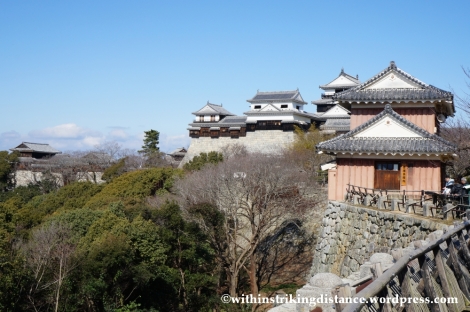 Before making my way there, I paused for a few moments to enjoy the sight of plum blossoms set against the bright blue sky.

At last, I arrived at the entrance to Matsuyama Castle’s inner enclosure and main tower. The structure’s previous incarnation burned down in 1784, but wasn’t completely rebuilt until 70 years later which makes this a relatively young member of the Group of 12. 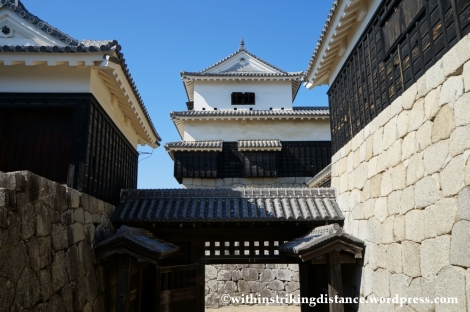 No concrete knock-offs here: this is the real deal, with stone walls and ancient wooden buildings that practically ooze history from every beam and roof tile.

The interior houses a museum crammed to bursting with artefacts. 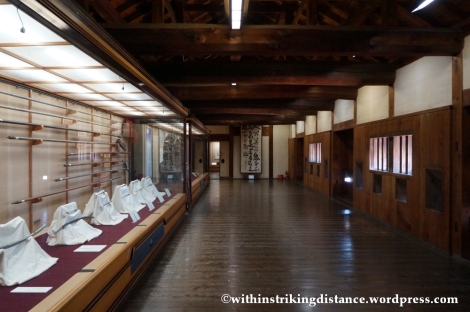 Here’s an interesting relic: a large ceremonial arrow used at the castle’s ridge-raising rites (which marked the completion of the building’s framework).

Lots to see inside, but don’t forget to glance outside as well. The castle’s many windows offer splendid views of the compound and the city beneath it. 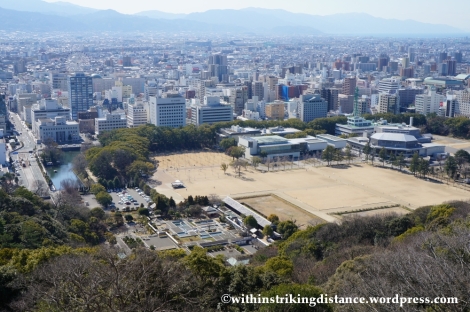 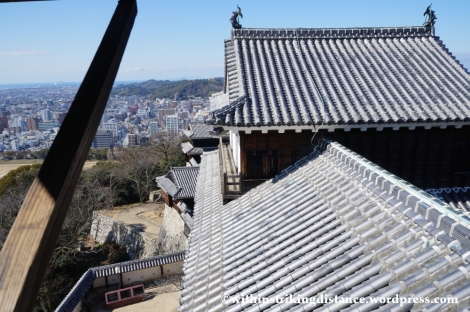 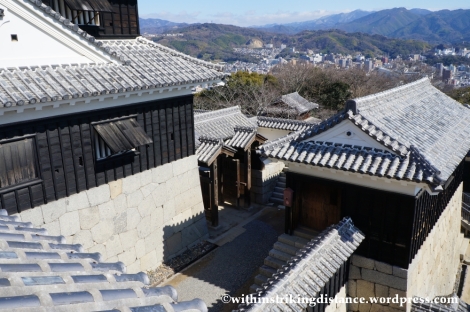 It’s a fairly long slog to the uppermost storey, but your perseverance will be rewarded with magnificent views of the city. 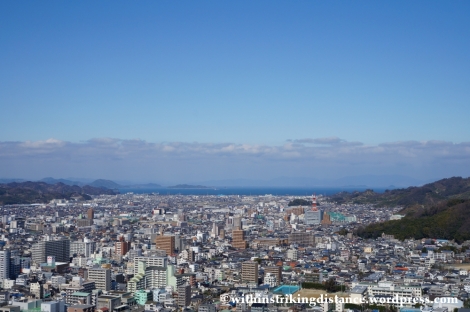 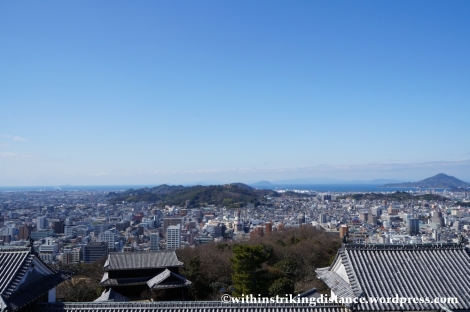 Very nice indeed – but my day in Matsuyama was far from spent. At one of the castle’s rest stops, I recharged my batteries with iyokan-flavoured ice cream . . .

. . . before hopping back onto the tram network to see more of the city.