The use of the adjective “magical” tends to send me retching, but I’ll admit that the word entered my mind as I enjoyed a candlelit evening in a small city on Hokkaidō’s Sea of Japan coast.

Not long after arriving back in Sapporo from a day trip to Asahikawa, I found myself on another train – this time heading northwest from the prefectural capital. My destination: the harbour city of Otaru, in Shiribeshi Subprefecture.

Located just 30-60 minutes by train from Sapporo (the fastest services being the Rapid Airport trains that link the city to New Chitose), Otaru is a worthwhile and easily doable stop for any tourist visiting the area, no matter what the season. But as with many places in this northernmost main island of the Japanese archipelago, the city acquires a certain special charm during winter, particularly when the Yuki Akari no Michi is on.

The so-called “Snow Light Path” festival is little Otaru’s answer – though I’d rather say complement – to the ginormous Yuki Matsuri put on by its larger neighbour Sapporo. Held every February, this charming winter celebration is often partly concurrent with the Yuki Matsuri and easily fits into the itinerary of visitors who’d like to hop from one local event to another whilst in the area. (In a future post, I’ll take you to see yet another winter festival that takes place at around the same time as these two.)

Walking eastwards from Otaru Station along Chūō-dōri, I came across a narrow clearing flanked by buildings on either side. Rather like a road, except there was no concrete or asphalt here – for this was the path of the now-defunct Temiya-sen, an abandoned railway line that runs across a large swath of downtown Otaru.

If I had come at any other season, the scene that would have greeted me might have looked something like this snapshot on Wikipedia: the disused track running down the middle, remnants of equipment on either side, and rows of trees sporting bright green foliage.

Instead, I encountered a long strip of snow-covered land, spiced with sculptures and spangled all throughout by flickering lamps.

Most of the track was buried under a thick layer of ice, but part of it was uncovered and put to service in a frozen artwork featuring a locomotive modelled in snow.

Sapporo’s Yuki Matsuri had ice slides aplenty, so there was no surprise at finding a similar feature here.

And stretching off into the distance, true to the festival’s name, a yuki akari no michi lit by the glow of countless candles.

That’s right – candles. Not cheap electric lamps but the real deal, hundreds of them, all painstakingly lit by hand. 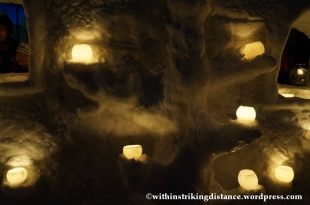 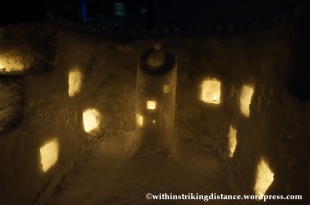 Awww, look at these two trying to get a bit of warmth.

Ah well, why ruin the happy atmosphere with unhappy thoughts? Let’s leave these two alone and continue our walk down this beautiful lamp-lit lane. 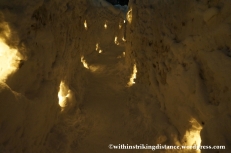 Nice work with the frozen foliage.

From here, I walked further east towards the Otaru Canal, an old waterway lined with warehouses that once formed part of the city’s harbour facilities. 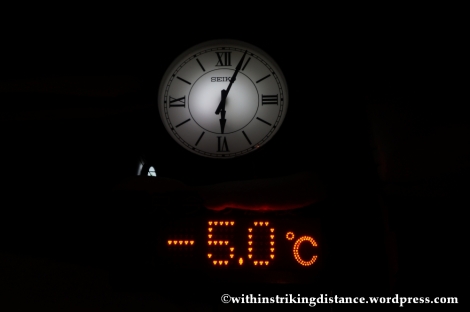 The perfect recipe for some wintertime magic.

Mm, feeling very cold and feeling very tired. The perfect recipe for a return trip to Sapporo and a good night’s rest in my warm hotel room.

Not to worry: even the walk back to the station was not without its visual rewards. 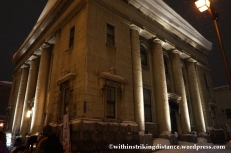 Ahhh, what a great end to today’s sightseeing. We’ll see a bit more of Otaru a couple of days from now, but tonight’s the time to dream sweet dreams of Asahikawa and look forward to our return trip tomorrow.