We’ve got time on our hands before this afternoon’s flight to Sapporo, so let’s go for a relaxing stroll through one of Tōkyō’s finest gardens.

Like most of Tōkyō’s other traditional gardens, this splendid oasis of green once formed part of an Edo-period aristocrat’s private residence. In 1878, wealthy industrialist Iwasaki Yatarō (founder of Mitsubishi) purchased the land and developed it into a recreational garden for his employees and guests. On top of the usual landscaping work, the Iwasaki family enhanced the garden by adding dozens of unique and valuable stones collected from all over the country (conveniently transported here on their company’s ships). After the devastating earthquake of 1923 damaged the garden, the Iwasaki family donated its eastern half to the city government, which undertook restoration efforts before opening the facility to the public in 1932.

Admission costs just 150 yen, making this a great (and relatively cheap) place to unwind in the midst of a hectic sightseeing journey across Tōkyō – or, in my case, an inexpensive way to kill time before a flight.

The winding paths take visitors on a long circuit around the large central pond, with stunning new vistas opening up almost with every step. 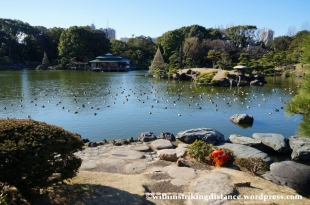 And then there are the garden’s famous rocks. These include more than 50 large specimens exhibiting various unique characteristics.

Others may or may not have unusual shapes or colours that would otherwise make them stand out, but have been used and arranged in ways pleasing to the eye. This large boulder, for example, bears one of Bashō’s haiku. 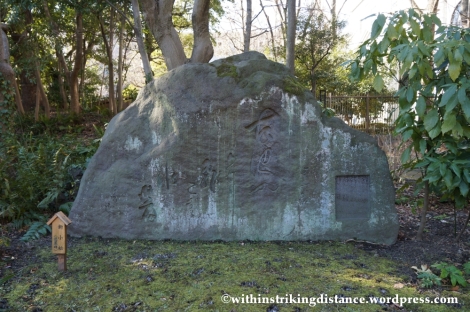 This collection of rocks, large and small, creates the image of a dry stream and waterfall. 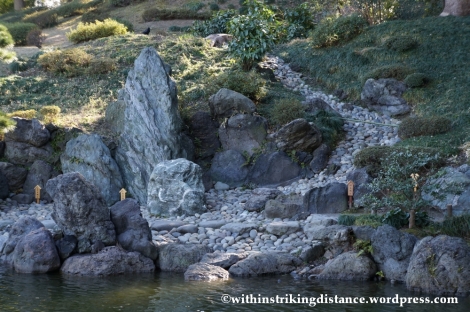 Some of my favourite arrangements feature rocks laid out as stepping stones, forming paths that skirt the edges of the central pond. 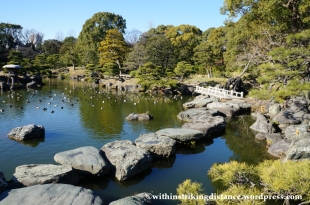 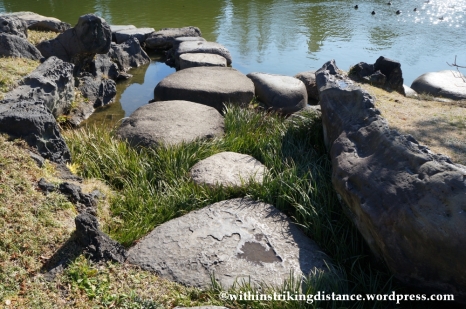 All relaxed and refreshed? Good. We’ve got a long journey ahead of us, unto the wintry wastes of the uttermost north, there to behold the magnificent creations wrought by the hand of man from the powdery white snow cast upon the frozen landscape by the silver-grey skies above.

Or I could just say that we’re flying to Sapporo for the Yuki Matsuri, but hey . . . gardens can make a poet of a man. (They won’t necessarily make him a good poet, though.)

The journey continues in Sapporo.

A quick unboxing before bedtime: Toys Cabin’s 6-item 戦国の茶器 四 利休の章 set. This features miniature replicas of tea equipment either used by or made by Sen no Rikyū (1522-1591), one of the key figures in the development of the Japanese tea ceremony. My initial disappointment in the inconsistent scale - and the fact that some of these are too large for my intended use as nendoroid props - was quickly overcome by satisfaction over the incredible detail and quality of these pieces. Easily one of my favourite gachagacha capsule toy sets thus far. #miniatures #gachagacha #capsuletoy #ガチャガチャ #戦国の茶器 #千利休
Unpacking one of the newest additions to my Japanese miniatures collection: the 5-item 空港マスコット gacha set from J.Dream (with a nendoroid figure for scale). I’d love to unearth more airport-themed miniatures of a similar scale, in the hope of assembling and furnishing an air terminal diorama for my nendoroid photography. #ガチャガチャ #miniature #airport #空港
Finishing up my unboxing of Re-Ment’s ふるさと納税便 set. No. 5: Kaga vegetables from Ishikawa Prefecture. No. 6: Motsunabe ingredients from Fukuoka Prefecture. No. 7: Kuroge Wagyū and red wine from Hyōgo Prefecture. No. 8: Farm products from Chiba Prefecture. #rement #ふるさと納税便 #リーメント #リーメントぷちサンプル #リーメントふるさと納税便 #miniaturefood #miniature
Halfway through unboxing Re-Ment’s ふるさと納税便 set. (Going slow on this one to savour each moment, haha.) No. 1: Seafood from Hokkaidō Prefecture. No. 2: Fruits and juice from Yamagata Prefecture. No. 3: Dried fish from Shizuoka Prefecture. No. 4: Rice and eggs from Niigata Prefecture. More to follow after I’ve opened boxes 5 through 8. #rement #ふるさと納税便 #リーメント #リーメントぷちサンプル #リーメントふるさと納税便 #miniaturefood #miniature
Just a little something I’m trying out to help manage my, shall we say, delicate mental state. (As you can well imagine, the last year or so hasn’t exactly been kind to my mind.) The arc is somewhere in the middle of this as-yet-untitled manga series, so I’ve written it as if the reader already knows the characters and the setting. Can’t be bothered to explain further right now, haha, though I will add that Shima Rin and Hinata Shōyō are meant to be like their anime equivalents (whereas the two older chaps are original to my work and NOT meant to parody the characters they’re derived from). And yes, this is partly why I’ve been ordering all those Japanese miniatures. I can’t draw to save my life - so I’d have to take pictures instead. 😅 Final note: read it Japanese style, right to left (otherwise the dialogue won’t make much sense).
I’ve ordered and opened more Japanese miniatures since my last post (just too lazy to mention them), but I couldn’t resist the urge to write about this Re-ment Snoopy Coffee Roastery and Café set. I’ve spent a good part of the morning reading up on coffee thanks to the curiosity generated by this set, and I think I’ve a great idea for a writing project inspired by these pieces. #リーメント #リーメントスヌーピー #リーメントスヌーピーカフェ #rement #miniatures #peanuts #snoopy
One might characterise this as “overkill”, having nearly all elements of the Re-ment よきかな和の暮らし set laid out together like this. In future I intend to rotate pieces in and out, to match the mood and seasons (along with the other miniatures I’ve already acquired and have yet to acquire). That said, the eye-popping detail in these minute reproductions is really quite astounding. #リーメント#リーメントぷちサンプル #リーメントよきかな和の暮らし #rement #miniatures
The fun part was opening each box, not quite knowing what was inside. The not-so-fun part was assembly and sticker application (for some of the more complex elements). Made me wish I had a pair of craft tweezers and a good set of magnifying lenses. #リーメント #リーメントぷちサンプル #リーメントよきかな和の暮らし #rement #miniatures