When it comes to Japanese comfort food, gyōza ranks stratospherically high in my book, sitting all the way up amongst the glittering clouds of immortal fame with such luminaries as curry rice and Hakata-style ramen. I haven’t the foggiest idea if the locals would agree, but that’s what I think anyway. Fast, filling, carbohydrate-heavy: the sort of dish that can wipe off a frown and leave a smile on your face after the most stressful day work – or sightseeing – can throw at you.

Now if you haven’t got time to roll out your own dough and chop your own fillings, I see two viable options. One, buy a pack of frozen gyōza from the nearest store and fry them up at home (or pop them in the microwave if you’re that pressed for time).

Alternatively, you can take the next train to Kameido Station and try this amazing little hole-in-the-wall gyōza joint that I had a late lunch in not too long ago.

That is, if you can find it. (Cue villainous grin.)

Where? Within walking distance of Kameido Station on JR East’s Chūō-Sōbu Line. Tabelog‘s map marker is right on the money.

How much? 250 yen for a plate of 5 gyōza, but you’ll need to eat a minimum of 2 plates (so the least you’ll spend is 500 yen). The price simply goes up by 250 yen per additional plate; no quantity discounts.

English menu? Nope. Then again, with just one food item on the menu you don’t really need one.

Links? Tabelog has the best write-up on the store, including an accurate map – though it helps if you know a little Japanese. TripAdvisor offers English-language reviews, but (as per usual) their map is a joke, with the marker in the right general area but on the wrong street. [UPDATE (18-Jan-15): The TripAdvisor map appears to have been corrected now.] They haven’t got a company website, so far as I could tell, but then again this isn’t the sort of place that needs one.

I’ve recently resolved to partake of the local food scene more than I previously did, whenever I’m in Japan. Quite often, the easiest way is to go to a place that serves a local speciality: miso ramen for Sapporo, apple products for Aomori, okonomiyaki and takoyaki for Ōsaka . . . something along those lines. Some associations might be based on stereotypes, but that’s not necessarily a bad place to start if one keeps an open mind once on the ground.

But Tōkyō – ah, now this place is a little harder to pin down. What’s it known for, food-wise? A quick walk through the ‘net reveals that it’s known for just about everything: sushi, ramen, okonomiyaki, sukiyaki, tempura, katsudon, curry rice . . . in short, pretty much every Japanese dish imaginable.

Adopting a food historian’s approach will no doubt enable me to trace every item on the list back to its origins, and determine which are truly homegrown Edokko dishes – if such a thing even exists. But come now, this chap is just a simple, hungry, unsophisticated tourist in search of something tasty to fuel up on for his day of sightseeing. Pick something whose origins (stereotypical or otherwise) you don’t know and go with that, end of story.

Hmm, well, I don’t know what part of Japan gyōza first came from. Ultimately from China I suppose, but where it first landed in this country and where it spread from . . . no idea.

Great. You’ve got your dish of the day.

Having decided upon what to eat, I now trained my sights on where to eat it. Truth be told, I can’t recall exactly how I settled upon this particular backstreet place, but it was likely a serendipitous find on an unfocused trawl through the Internet – perhaps a mention in a blog post or two by authors who decided that this half-hidden gem was good enough to bother writing about.

Oh well, I’m not here to write a biography so let’s ditch the origins and jump straight to the food. We now find ourselves in a very narrow side street just off the main road in front of Kameido Station, staring at this simple shop front in Japan of the 2010s.

We step inside . . . and we find ourselves in Japan of the 1950s. (Assuming one can mentally airbrush the A/C units and fluorescent lamps out of the scene.)

On the right, a raised tatami-mat floor with a few tables. On the left, a central kitchen enclosed all round by a long counter and stools, filled with patrons chatting noisily about neighbourhood matters whilst filling up on little fried dumplings.

And at the centre of it all, a grey-haired chef surrounded by the tools of his trade, ready to spring into action the moment one of his customers’ plates goes empty. 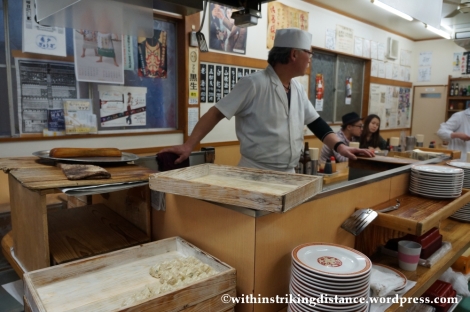 I settled myself into an empty stool – not easy to find at peak times (or so I’ve read), when lines can stretch out of the door and down the street. But my timing was right, mid-afternoon on a weekday when most people will be trapped at work or in school.

One of the two women manning the service end of the operation came by and asked what I’d like to drink. I didn’t want beer (the usual tipple in these parts), so out came a pitcher filled with cold water. You, on the other hand, might want something a bit stronger, so let’s have a look at the menu posted on the wall. 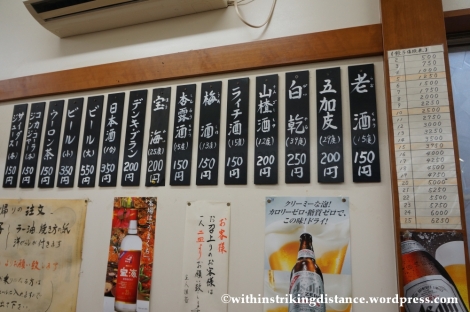 Cider, juice, Coca-Cola, ginger ale (I think – the board just says “jinjaa”), small beer, large beer, nihonshu . . . in short, all drinks. You’ve got options as to your preference of poison, but when it comes to food – sorry mate, we only serve gyōza here.

That’s what the numbered list on the right is for. But we’ll get to that later. Right now, one of the lovely shop ladies has just served up Plate the First.

Whilst waiting, I’d gone ahead and mixed up my own custom-made little dish of dipping sauce, using the condiments on the counter. All done to taste, no rules. They’ll just hand you an empty dish with a small dab of, now what was that, mustard? The rest is entirely up to you.

Now these things are freshly fried, so let’s give them a few seconds to cool. (I think the locals, having developed asbestos mouths through a lifetime of slurping hot ramen, tend to just dive right in – but I value the health of my tongue.) Take a moment to examine the five little nuggets of glory set before you. Look at that skin: perfectly browned, crisp on the flat surface, tender along the sides. I didn’t observe the chef closely, but judging from the spurts of vapour that rose from his end of the kitchen now and again, the standard cooking process of frying combined with flash-steaming was probably involved.

Nothing fancy in here, or at least none discernible to my untrained eye. Cabbage, plus the usual meaty bits. If I had to nitpick, I’d enjoy a bit more garlic being thrown into the mix, but that’s just me. (I’ve read one account where the diner actually liked the restrained amount of garlic used.) Regarding the flavour profile, it’s not the best I’ve ever had, but it’s still quite good.

And the skin – oh that skin. We saw earlier how lovely it looked. On the teeth, it tasted even lovelier. Perfect crunch on the browned bits. This chef is a genius.

No sooner had I finished Plate the First when a Lovely Lady (can’t recall which of the two) plonked down Plate the Second. You don’t need to ask for it – in fact, you can’t even refuse. The shop has a strict two-plate minimum so the cheapest meal here (two dishes and free water) costs 500 yen. After that, plates of five gyōza each will keep coming on request, until you’ve had enough.

Unless you’ve got the smallest of appetites, it’s actually not difficult to polish off the first two servings. Kameido’s gyōza are small, almost minuscule for the big-mouthed – about half the volume of the larger frozen supermarket variety I’m used to eating back home. Besides, we can’t let the elderly locals across the counter beat us, now can we? Is that six or seven plates I see, and they’re not even done yet! Onwards comrades!

Plate the Third went down without a hitch, but my stomach was now starting to feel full. I can’t recall if I’d been snacking a lot during the day, or if it was the frequent beverage stops at vending machines . . . whatever it was, I seem to have reached the point of satiation. I signalled for Plate the Fourth, which one of the Lovely Ladies stacked on top of the others (unceremoniously sliding the last gyōza from the Third onto the new plate) – and that was it.

Time to pay up.

Remember the numbered table posted on the wall earlier? Just run your eyes down to the number of plates consumed, note the corresponding price, add the cost of your drink (none in my case), and voilà! There’s your bill.

Here’s a shot of a longer version of the table posted on a different wall.

I sure hope that the line for 37 plates (9,250 yen) is something ordinarily reached by groups dining together. If I ever see someone actually go that far on their own . . . hmm, what’ll it be I wonder? A congratulatory handshake, or a fist in the solar plexus for doing something so mind-blindingly stupid?

Thus ends my day in this hole-in-the-wall wonder. I hand over a 1,000-yen note and return, released from my obligations, to the workaday world outside.

Here’s how to get there. I actually shot these in reverse (as I was heading back to the station) but I’ve arranged them in the appropriate order here.

First, walk out of the North Exit of JR Kameido Station.

Walk straight ahead along the pavement. 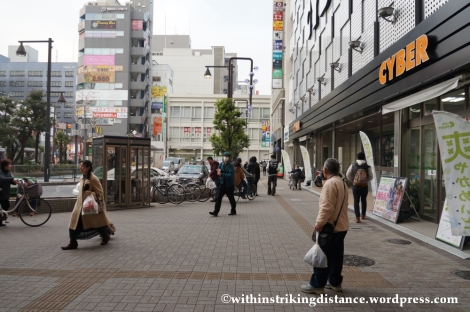 Cross the street. You’ll see “gyōza” written in big red hiragana on a sign propped up against a building – that is, unless they move the rather temporary-looking sign away.

Once on the other side, turn right and walk a few steps (literally just a few steps) until a narrow side street opens up on your left. (In fact, you can already see the tiny street in the previous photo.) If it hasn’t been moved (again, entirely possible given its rather flimsy appearance), you’ll see a simple signboard on the corner with the shop name painted upon it. 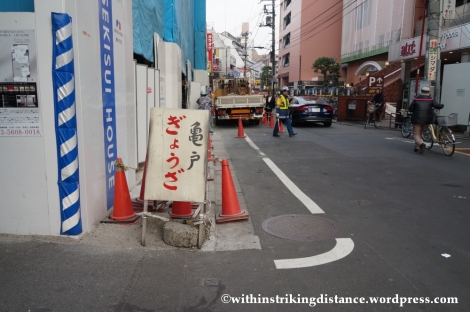 Turn left into the narrow street. Keep walking until you reach your target, which will show up somewhere on your right. 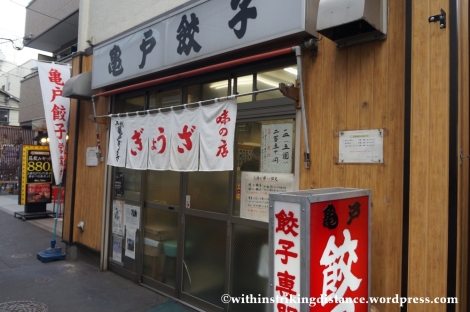 And there you are. Enjoy.